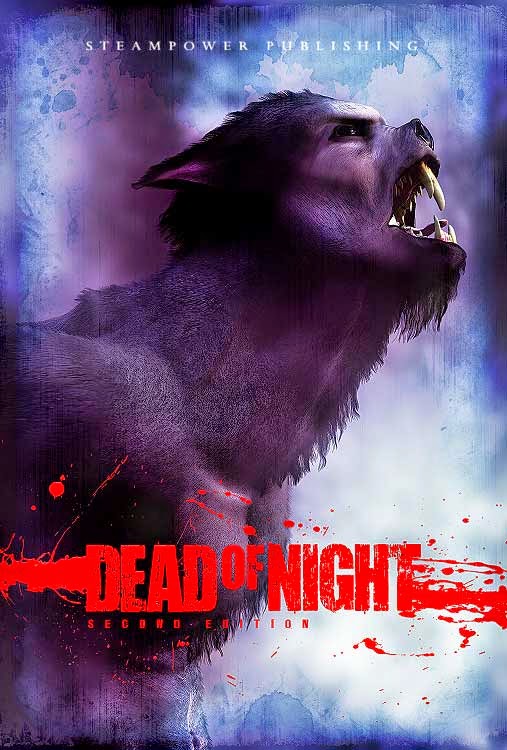 In the 2000’s there were a lot of games that came out and never really got the attention they deserved, including a game that came in the smallest book I’ve ever encountered (with the exception of the D&D miniature book reprints…), and turned out to be one of the greatest games I’ve ever had the pleasure to play.  I should point out in advance that all Photo's in this review apart from the header are from the tiny first edition that I have a print copy of... 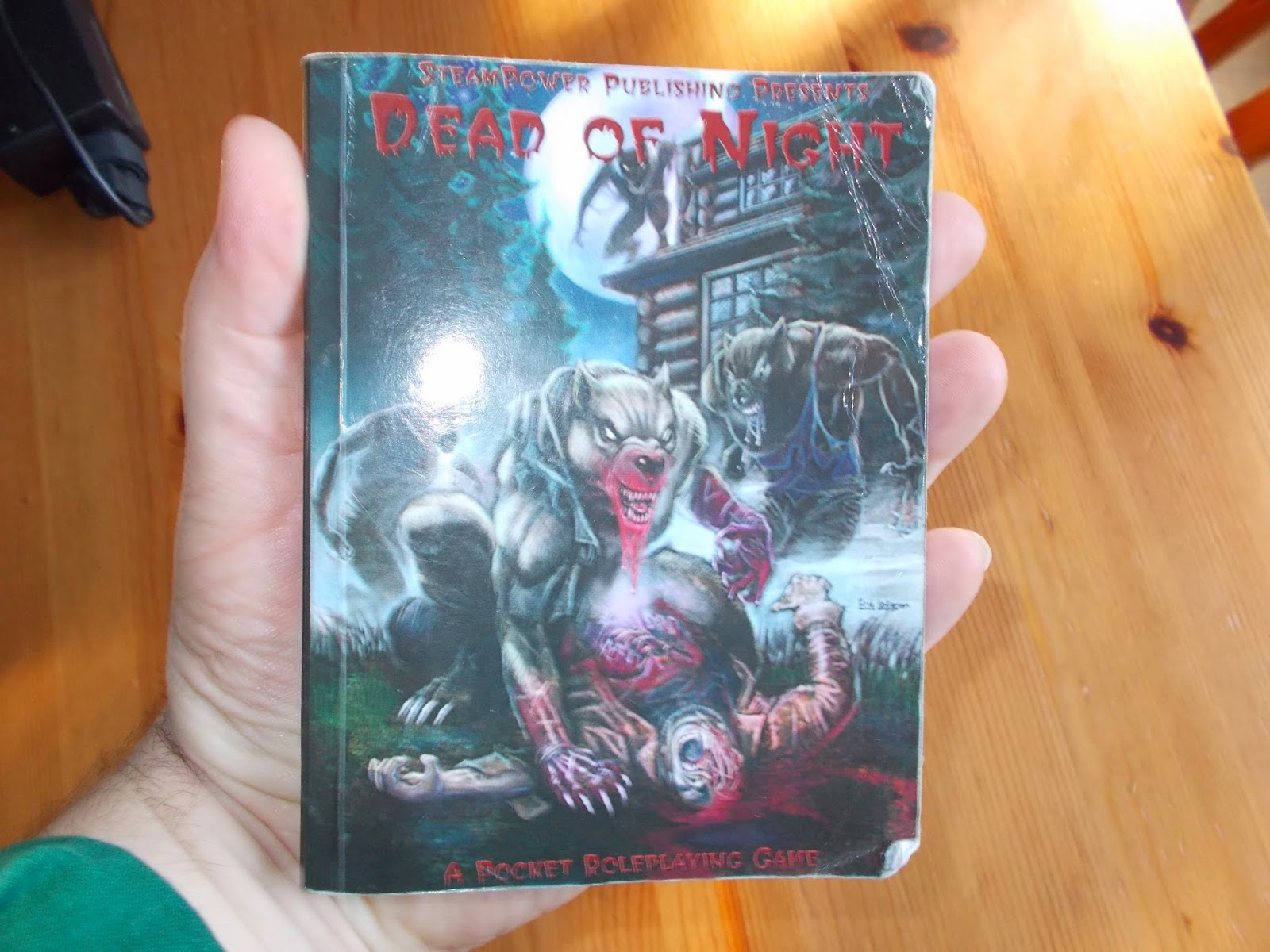 It’s my most recent purchase because a friend of mine has just moved and misplaced the copy that I got her of the tiny book version and so I picked up the second edition on drivethrurpg as a stop gap until the print version arrives as a late birthday present for her.

Dead of night is a game that works on the premise that the characters are working their way through a horror film, with all the cliché’s that form a part of those films, survival points can be lost for getting attacked, or you can use them to affect die rolls at critical junctures within the game.  Survival points can be gained for doing things that would be correct within the premise of a Horror or Slasher film, splitting the party for example or opening the supposedly inert tomb of the mummy lord.  With a number of fans of this sort of film, simple games can turn into raucous fun with everyone trying to do each other as the game progresses. Dead of night was one of the most revolutionary ideas I’d ever encountered when I read it, and it remains to this day one of my personal favourites for conventions because everyone’s seen horror films, everyone knows most of the rules of horror films, and it’s those that the game runs on.  For a beginning GM, a system that uses four stats and splits ten points between each is simplicity itself, allowing you to get people playing within seconds, no lengthy character creation and no difficulty in explaining how things work for everyone.

Looking at the second edition, the first thing to notice is that it’s better organised than the first edition was, there’s the character creation and rules of the game, and then it goes into the section where new rules such as Tension and Intensity are added to ramp up the involvement level in the game, something that was mostly lacking in the previous game.

Then we’re on to monsters, and a section entitled “What’s my Motivation...?” giving people the impetus for playing any one of a number of the monsters from classical horror such as the Unstoppable Killer (Jason Vorhees) and the Thing from Beyond (Alien), together with suggestions on how best to run those creatures and specialities that they might have to make them even harder to kill. 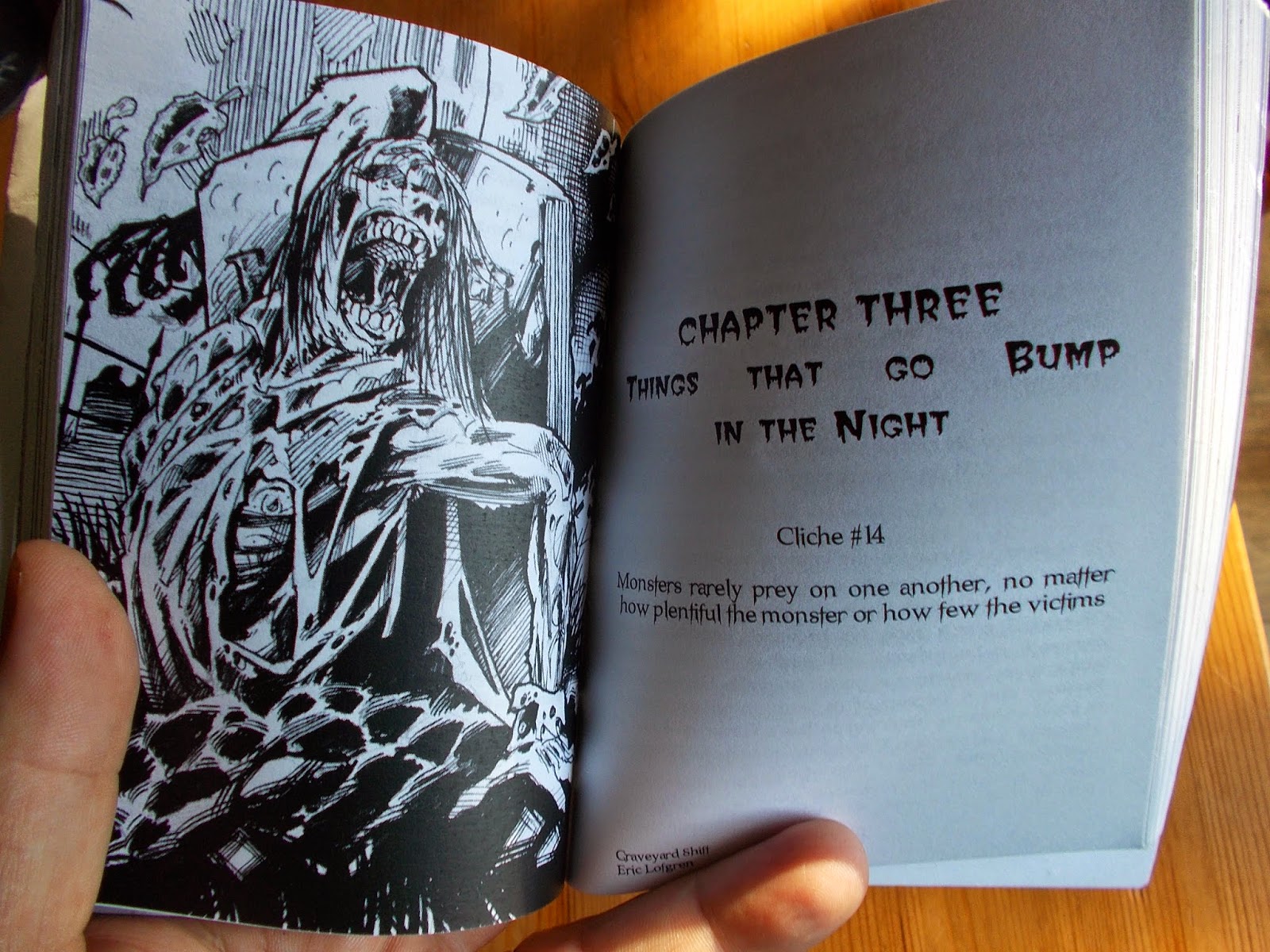 The next section is Genre, and a list of the various different types of horror film, which may seem like a bit of a misnomer as you’re playing this game because you like horror films, but there’s a really wide range and a good set of suggestions to get you some variety in your choices.

Which brings us to the Toolbox of tricks to use on players, a series of articles written by people who know their stuff in the horror genre, it’s more than a few different essays on the best way of doing things and it’s excellent stuff whether you’re a beginner or an old hand.

The last section is Scenarios, wherein several detailed scenarios are presented, with all the details and notes that would be needed for a novice GM to run through from scratch, they’re all well presented and clear and each has a very unique take on the game.

Artwork throughout is well done, with a lot of the images being done up in the form of film posters about that particular creature or scenario, which given how the games works, is a particularly nice touch.

Either way though, nice to see that it got the upgrade it needed, and I’m sure that Sarah is enjoying it just as much if not more than the previous version.