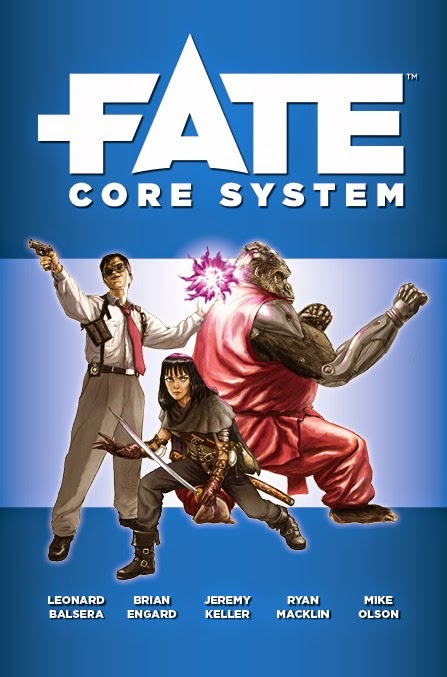 There’s a variety of different systems out there, ranging from the diceless wonders to the games that use so many tables that you need a computer to keep up with them all, they’re all useful for their purpose, but most of them are only good for the game that they were made for.  There are now a number of games where the system is all that is offered and the game worlds follow, with the system made available for all to use as they see fit.  The first example of this was when D&D made their system available to everyone on the understanding that they acknowledged who it was who had given them the system to put on their world setting.  This was followed in time by Savage worlds, and then by FATE, and today, it is FATE that I would talk about.

The system is a simple one, based on the original FUDGE system of four dice with pluses and minuses, but unlike FUDGE, FATE has the roll added to an aspect or skill that you tag with one of your fate points, with any positive as a success per the rules rather than having predetermined attributes.  The beauty of the fate system is that it isn’t limited by lists of skills or ideas that others have thought of, it’s completely down to the players to choose what suits them best.  The other part of the system allows the GM to offer the player an incentive in the form of a Fate point to undertake an action or complicate something according to the skills or aspects on their character sheet, usually one that will inconvenience them, in return for keeping the fate point with which to use for their own benefit.

Certainly the system can be easily abused to make very powerful characters in short order and then use the skill system to their own benefit, but when it comes to making characters that will fit any particular setting without having to change the system at all, there’s no system better than this one.  The curious thing is that for the most part, the system hasn’t seen much action beyond the realms of hardcore gamers, and it’s difficult to see that when we’re all Hardcore gamers, but given time, and a little more publicity (at which Evil Hat, makers of Fate, Excel), the system will eventually see the light of day beyond the all of us that know about it already.

The reason why I like FATE more than most of the free systems is that because of its combination of versatility and simplicity, it’s been used for a number of different world settings, most notably the Starblazer, Mindjammer, and Spirit of the Century lines, it saves people having to come up with a system that works, letting them concentrate instead on the game world itself, and for the most part, that’s what gets people interested in the game in the first place, something I’ve considered for quite some time when it comes to putting out my own game into the world.

That said, there’s now no shortage of games coming out for the FATE system, and the charge towards making more worlds shows no signs of stopping any time soon, so it could be in years to come that the argument isn’t between which is the better game of D&D and Pathfinder, it might instead be FATE and any other system.