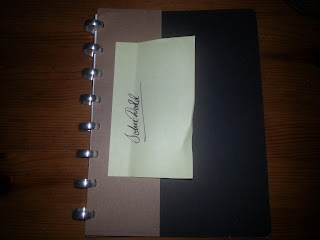 As with Pens, so it is with Notebooks, you keep looking for combinations of things till you have exactly what it is you're after.  For the most part, it's significantly easier with pens, you can get light or heavy, EF to stub nibs, plastic to metal casings, and all in between.

Notebooks however, Notebooks are a little different, particularly if you're wanting a very specific combination of things.  This week just gone, I had an opportunity to get in early on Rob de la Porte's latest experiment, the book arrived yesterday.

It was everything I was after.

The first problem I have is that I have tiny writing, there's no other way to describe it, so most of the time, with regular lining on notebooks (between 5mm and 7mm), I end up losing a lot of the page to blank space because my writing literally fits between the lines.  Not so here... 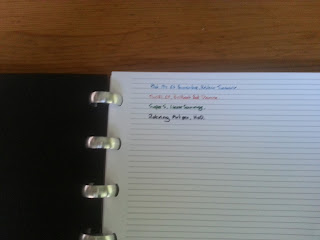 Then there's the quality of the paper, it's no good to me if it bleeds through, no matter the type of ink I use or the saturation of it. 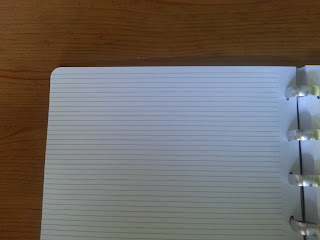 Zero bleed through, not even the hint of the opposite side.  It's technically 120gsm, but it has a silk finish, so doesn't feel as thick as it actually is.

Then there's the binding of the notebooks, I do a lot of work in smaller spaces, so I appreciate it when the notebook clean over without any resistance, and the rings used for binding here are very similar in nature to the Atoma notebooks I've used before, only in shiny aluminium. 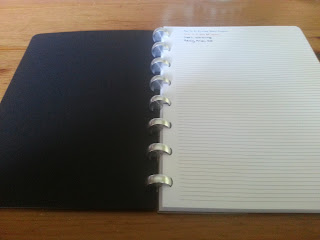 Given the nature of the binding, it means that all pages are detachable and moveable within the notebook itself, giving me the ability to change things around or re-order my notes as I need to.  This may not seem like a big thing, till you realise that I have more than twenty notebooks between A7 and A4, all full of notes, all of them making a reference to pages in other books where I've had similar ideas.  With this one, I just take the page out and move it next to the similar ideas as I have them, no more need to keep a multiple index, just change the book to suit.

Is there a price on perfection?

Of course there is...

£15.95 for the aluminium book I have here, £10.95 for the same book with plastic binding.  This isn't cheap, for the same money you could get a medium Leuchtturm or Moleskine, and while both of those books are good things to have, they don't possess the ridiculous utility of this one.  I'd get more pages in either of the other two books, but the 60 pages of invulnerable, hyper narrow ruled, re-organisable notebook here easily outweighs the use of either of them. It may well be the most useful notebook I've ever owned, and certainly the one that I'll be carrying most places to make notes with, which given the number of notebooks I have, is quite a thing...

The thing to consider here is that this was made for me on request, the 3mm wasn't available till I asked for it, and I've seen the other templates available for this, as well as Rob's willingness to consider anything at all, because he understands that if you are particular about what you write with and on, it's important, and he treats it as that.

These will be available soon from http://www.personalised-stationery.co.uk/

Second review of Personalised Stationery, one to keep an eye on here folks...
Posted by John Dodd at 13:38 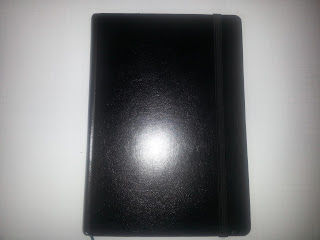 It seems to be the week for looking at different types of notebook, the thought occurred that I've lost my way in recent days/weeks/months, too many projects live, too many things going on, no time to recover in between them.  In the meantime, all the things I should have been doing kept on stacking up.

So, there's going to be a bunch more reviews coming in the next very short while, at least till I catch up.  Todays book is something new, a half ruled book, by which each double spread has a blank page and a ruled page.  Ideal for putting ideas and sketches in the same book, but for people who pretty much write exclusively (like me), it was a calculated gambit.

The Seawhite has a feel similar to medium Leuchtturms, thick card with a PU cover, heavy duty elastic binder and a single bookmark ribbon.  The paper in the Seawhite is 130gsm, very close to cartridge paper in its feel, and as evidenced below, holds the ink without feathering at all. 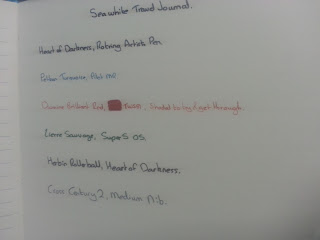 Those on the fountain pen forums will note I've also included a biro and a rollerball on the ink test, the reason for this is that I've had a number of people who've asked if there's any difference in papers for ordinary pens without fountain pen ink.  My comment has always been that there isn't much when you come to use Biro's, but for sake of completeness, I'm including them in the tests.

So to the bleedthrough test. 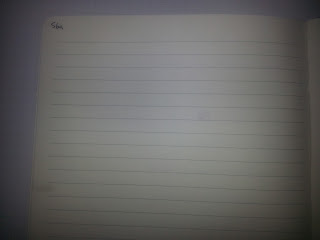 It's 130gsm, trying to get bleedthrough on it is like trying to get through Kevlar with a BB gun, an amusing exercise, but doomed to failure.  The interesting part of this is that I expected that the line on  the other side of the page wouldn't be visible either, but if you hold the page down, the line shows through just enough to get a faint line on the plain pages.  That in turn is enough to be able to keep a straight line on all the pages, which has allowed me to use it as regular notebook.

So, summation, Seawhite notebooks are fairly cheap, the A5 I'm using was £5.99, an A4 is £6.99, I'm using mine mostly for scribbling at the moment, the solidity of the book lends itself well to carrying anywhere.  The full range is available at https://www.seawhite.co.uk/online/ although a number of other online suppliers stock them as well. 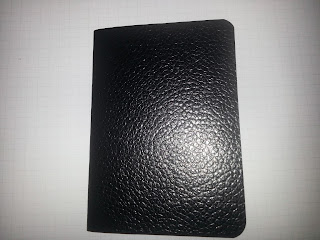 Alright, I'm not a hipster, and the title of this notebook suggests that I may have been brought over to the darkside, but fear not, I remain resolutely stuck in the 80's.  However, having seen these suggested on a random page whilst looking on the internet (I shouldn't be allowed to browse, really...), I thought to try them out.

For once, here's me just going out and buying a notebook, rather than waiting for the free sample, so it was to be hoped that they were going to be something special... 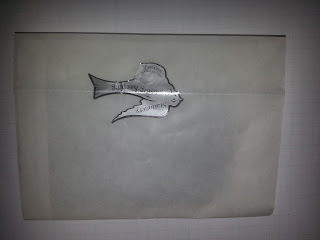 Very well packaged, address written in real ink with a broad nib and a practised hand, it certainly looked the business when it arrived, but at a fiver a piece, they're more expensive than a lot of the notebooks I look at, and given that they're only 130 x 95 mm, they're not the most massive of books either.  The cover is very thin and feels very much like textured plastic, not something to recommend most people to the book, but it works when you're putting it in a pocket journal.  Sturdy enough to stand every day use and light enough to bend and flex with the rest of the paper in the journal. 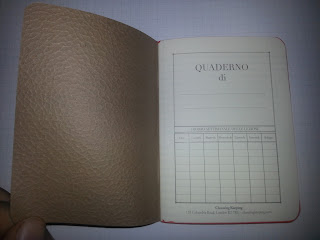 Front page is a normal contents page, more in keeping with a daily set of updates, and it'd need you to number the pages to make it useful, unlike such things as Leuchtturm where it's already good to go. 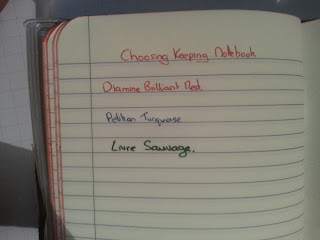 The paper within is what makes it stand out, lightly coloured, with red outline on the edge of the page, it allows fast drying, 5mm lines, margin on every page which will be to personal preference, and sadly the primary reason why I bought the books (the promise of a perforated page on every page) did not materialise. 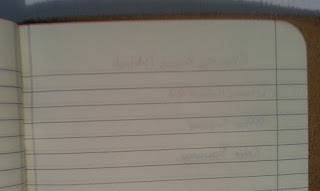 But as evidenced, even though the paper feels like less than 80gsm, the bleed through is negligible, and the feel of the paper makes for pleasant writing, even with very sharp nibs.

I bought two, and I'm enjoying the use of the first, it's not the best notebook I've ever tried, but it's easy to work with, and works well for scribbling things down in a rush.  There are a wide variety of other notebooks on the site, and they're available at www.choosingkeeping.com 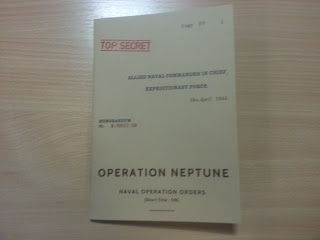 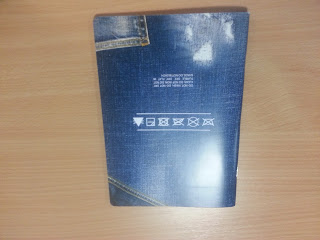 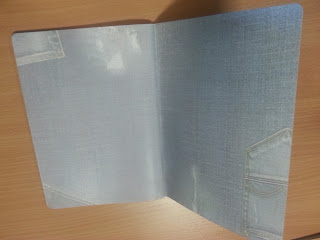 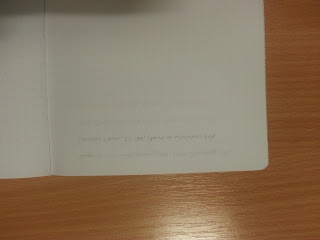 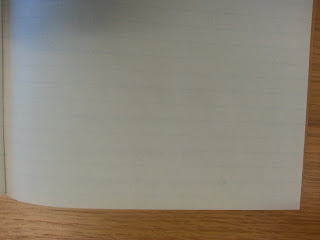 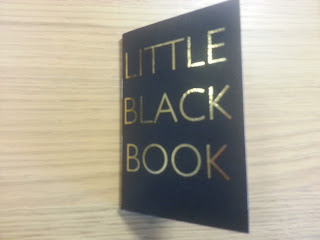 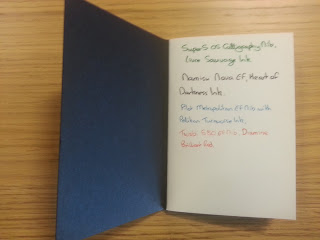 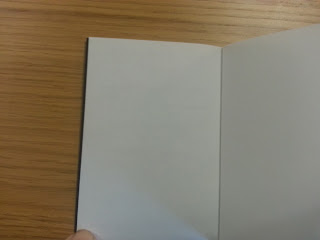 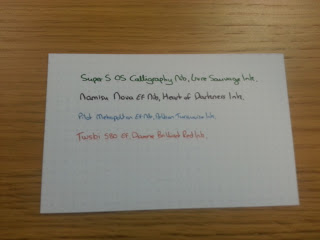 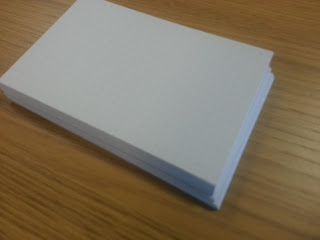 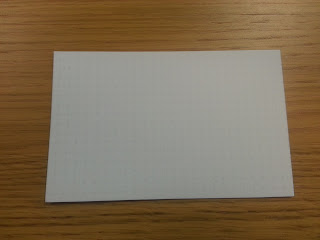