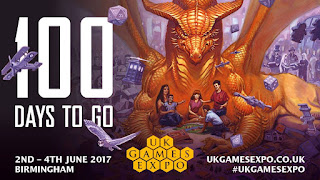 With us going live on the RPGs for this Sunday evening, we wanted to make a few announcements regarding special events that will not have been made live at the point at which we make every other RPG active.

The first of these events is the D&D World Premiere Epic, a 100 player event that has been given to UKGE following the successful D&D premiere from last year.  This event will be running on the Saturday night in the evening slot and will be going live as soon as the full details of the scenario are made available.

The second of these events is the Cthulhu Masters, a popular event every year, we’re currently setting the scenarios for the event, which will start with the qualifiers on the Friday afternoon, with one player from each of the qualifiers going forwards to the final on the Friday Evening.  One of our most popular events, the Masters has always featured handmade, unique prizes for those who make it through to the final, ranging from perfect copies of the Grail Diary from the Indiana Jones films, to a bound and sealed copy of the Necronomicon.  As soon as we have the scenarios finalised, we will be making an announcement and then setting the masters live.

Finally, there is an indication that there will be a Pathfinder society special event, but we are waiting on details from Paizo regarding the event and will announce the full details as soon as we have them ourselves.

We’ll still be taking submissions for RPG’s after this Sunday, but we would like to stress that with the unprecedented levels of rooms that have been required for Expo this year, we will be prioritising those who get their submissions in earlier when it comes to allocating rooms.

If anyone has any questions regarding submissions or games that will be coming up, please contact me at your convenience...

www.ukgamesexpo.co.uk
Posted by John Dodd at 14:14