So tonight I got to see an X rated film 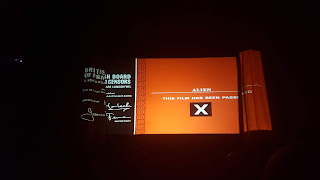 This comes as a bit of a revelation to me, particularly as I've seen this film hundreds of times before, from the original cut, to the directors, to the extended directors with added commentary, to the outtakes, to everything else.

However, I have never seen the film I saw tonight 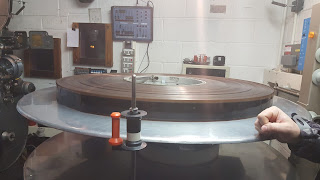 Every time a new edition comes out, you look for what's new in the version, the added bits, the extras, the new scenes.  What's the one thing you don't ask?

What they took out...

And it turns out, the 70mm edition has a lot of things in it that every version I've ever seen doesn't have, from little side clips of the actors moving about, to reframed shots that you've never seen from that angle, to sounds that you've never heard before.

Because it's being shown with 6 track magnetic sound, exactly as it was 40 years ago.

So me, Mark, and my excellent friends Cory and Joel went to see a film that we've all seen loads of times, and came away with wonder that there was a whole film that we'd never even thought about. 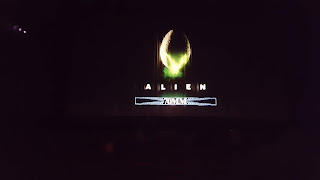 If you get the chance, go see this in 70mm, it's worth it just for the atmosphere.

One thing though, just after the iconic moment of the film, watching the actors all stood there, knowing what we know now, knowing the rotten trick that was pulled on them, there was a moment of silence...

And a ripple of laughter ran around the theatre...

Dragonmeet changes for this year

Last year at Dragonmeet was the largest Dragonmeet ever, and with it, we found that we needed more space again, and so the last three months have been spent negotiating with the Novotel.

Did I say Negotiating...?

The words used may need to be a little stronger than that.

Here's a swift lesson about hotels and convention centres, they don't care about your convention or you, they're strictly in it for the money, and that's how it should be.  This means that you're never going to get a freebie unless it's year one and they're trying to get you in the door so you'll pay them.  It also means that if you want something from them, you have to give them something in return, or be able to point out that they can make something from you.

In our case, thanks to everyone at the convention last year, we could point out that even with slow tills and bad service, they still sold out of food and drink by mid to late afternoon, and that, by itself, is reason enough to want us back. It's also reason enough to get more food and drink in, and to put more tills and better service in, all of which we have agreement on.  What we're now working on is getting the prices to somewhere near reasonable, which is forever a problem with hotels, just ask anyone who's been to the Hilton at Expo.

In terms of extra space, we've got the entire of the mezzanine this year, we've also got the big rooms on the top floor, because the boardrooms were only any good for single games, and when it becomes the equivalent of paying another three hundred quid per extra game you can host, it becomes counter productive.  This means we've got enough space to move more than the entire gaming roster into the rooms on the upper floor and the mezzanine, which frees up more space for open gaming and demonstration games, together with tournaments and a number of other things that we're still finalising.  Don't want to tease, but at the same time, I really don't want to get everyone all excited and then have to let you down, so more on that in months to come.

But one thing I mentioned in the podcast was that we listen, and we're still listening, so I want to know what people want to see at Dragonmeet going forwards.  We've held Larps before, and they did fairly well, so I'm looking to put those on again in the future.  We've had a Podcastzone, and it worked better last year than the year before, so they're coming back.  We've had seminars forever, but the question there is if we need the same seminars, different ones, or just more of either.

Bookings for traders are going to be going soon, and bookings for games being offered on the day are going to be opened at the same time.  What I'm hoping to do is have a clear list of games and traders on the day, some time before the convention opens, so in a change from previous years, I'm not leaving the bookings open till last minute.  When they close, it's a hard close, no more changes. Harsh, but it'll save us the problems that we've had every year prior with last minute alterations.

All that aside, very excited to show everyone what we're bringing to the Novotel this year, and we've been in discussion with Olympia, so when we outgrow Novotel, Dragonmeet will still have a home in London to go to.

But get those suggestions in, we can't make it the best convention without knowing what everyone wants to see there.

And if anyone wants to know my thoughts on conventions, they're to be found here.

http://www.enworld.org/forum/content.php?6134-Podcast-39-Secrets-of-Running-a-Convention-with-John-Dodd
Posted by John Dodd at 15:15

Convention round up and support requests

So I've been away a while again, last year was not good, and I mean that in a way where not good isn't an exaggeration, but I'm working on it.

Today sees three announcements for conventions, the first for Tabletop Scotland, the second for Longcon, and the third for Concrete Cow.  Taking on the directors reins at Dragonmeet ate more of my time than I had hoped it might, and this has had a knock on effect with other conventions that I run.

Tabletop Scotland is looking for new GMs to run games at their convention, it runs in Perth, between the 24th and 25th of August 2019.  They already have a strong D&D Adventurers league set of offerings, so what they're after is more in other systems than D&D.  Rewards for the convention include a GM T shirt and free entry for running a single game, with free entry for the whole con and a GM T shirt for running more than one game.  All enquiries or offers for games should be sent to david @ tabletop scotland .co .uk (no spaces for those wondering)

Longcon, the all weekend single game convention, is now open for submissions.  Running 6th and 7th of July at the Garrison in Sheffield, games can either run for one day or both days, but Longcon doesn't take normal four hour slots. The website is www.thedodd.com, please get in touch with me if you're wanting to offer a game.  Bookings for Longcon will be going live in May.

Finally, Concrete Cow is running all day tomorrow down in Milton Keynes.  An RPG heavy convention with a small trade hall and an excellent atmosphere, details can be found at https://www.mk-rpg.org.uk/Concrete_Cow

I'm going to be keeping up with convention news going forwards, whole bunch of new things coming up.

Let me know if there's any questions.
Posted by John Dodd at 09:09