A Writer, Reading - Review of The Space between the Stars 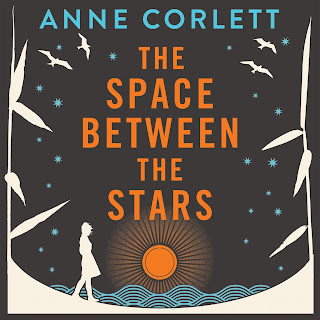 When you write, you have to read.

That's what everyone says, but a lot of writers I know don't read all that much, they settle for watching the latest TV series or skimming over the top of the latest best sellers.  The truth is, you have to read, and read thoroughly, because every once in a while, you come across a book that makes a difference in how you look at your own writing.

The Space between the Stars is such a book.

The human race is over and no one won.  A killer virus came along that wiped out everyone except a very scant few, amounting to around Nought point nought nought nought one percent of the population.  The virus mutates with every single victim, so even if you escaped it when you caught it the first time, stay around the virus long enough and it'll get you the second or third time.  The virus leaves nothing behind, breaking down the structure of the body till only dust remains.

The idea that there's nothing left behind is central to the story, what remains when there's nothing to look for, no bodies left behind, nothing at all?  It begins with Jamie Allenby, a vet on a backwater world, waking to find that she's survived, and that her troubles are only just beginning.  She sets out in search of Daniel, the man she had shared life and death with, who she'd left behind, and the forlorn hope that he might be one of the Nought point nought nought nought one who survived like her, as if love could be a defence against such a plague.

There are, of course, others that have survived the plague, and each tries to make sense of the new world in their own way.  Civilisation is still there, all the good and bad parts of it, and mention of a class system still being in place resonated to my English sensibilities.  But what made this book for me is the character of Jamie, a straight talking woman with all the complexities of a real person, who finds that not every she'd hoped for was in fact all she wanted.  The places they go are only touched upon, but the characters shine in every scene and I wanted them to succeed, to learn what they really want and then to get it.

That, and I didn't see the twist at the end, and I love it when any story catches me like that.

From a writers point of view, what I got most from this was that characters can hold a story far more than a scene, and that if you write your characters with their own intents and purposes, they become so much more alive.

Recommended, really good book, I'm looking forwards to seeing what comes next from Anne Corlett
Posted by John Dodd at 11:14

It is very, very rare that I get to actually go to a convention where I have nothing to do with the organisation or running of it, rarer still that the convention is question is larger than a hundred people.

Jude had her AGM in London on the Saturday, so we decided to make a weekend of it and go for both days, so it was with some interest that I went down to Tabletop Gaming Live this weekend just gone.

I didn't arrive for the opening of the con, Wood Green took a little longer to get to than I thought it would, but when I arrived, there was the very welcome sight of a double decker bus offering a free ride up the hill to Alexandra Palace.

I'll preface this by saying that I'm used to Expo, Dragonmeet, and Airecon, where every inch of the con gets used as much as it can be because anything not being used is a waste of resources, and those are limited for most.  Alexandra Palace itself is spectacular, large, spacious, well ventilated, and looking around from an experienced conrunner point of view.

Too large for the number of stands in there this year...

The official numbers on the doors haven't been released yet, but when everything is as spaced out as it was, and most people not staying for very long, it contributed to the hall looking quiet for an extended period of time.

Got there around 09:30, no queue on the front and walked in to find a trade hall that could have fitted in a far smaller space, massive aisles (sometimes as wide as six metres), and stands that had been originally booked as two metres having to fit into three, which led to views like this. 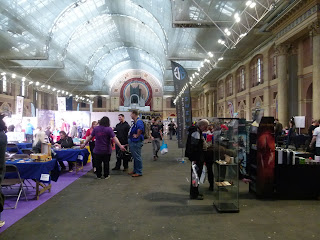 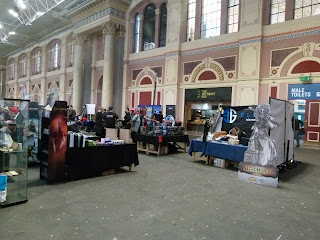 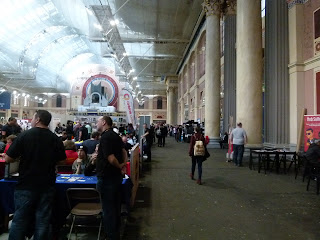 Many have commented that the lack of crush in the convention was something that really appealed to them, and I have to agree, being able to walk around a convention without having to push your way through really is something that's excellent to enjoy. For me, it's a sign that there weren't more traders there, particularly when you get to the back of the convention hall to find this. 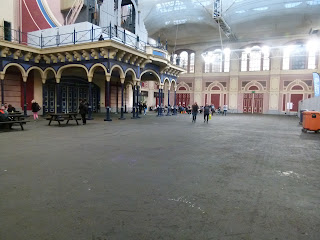 All photos above were taken around 11:00 in the morning on Saturday

The space being used in the other two rooms would have easily fit in here as well, so it felt more than a little empty, but there's at least plenty of space for the con to grow in coming years.  I took a steady walk around the trade hall, I know most of the traders from other cons, so spent some time talking to them about how it was going.

Year one, no one expects miracles, and while the estimates for attendance had been put at between 5000 and 10,000 uniques by the event, actual was lower than that and most of the traders had been hoping for more than attended.  At least one trader pulled out before the event and other traders weren't happy that information on the event had been changed several times in the run up to the opening day.  Some of that can't be helped, and being straight with your clients is the thing that saves most events.

I caught up with a few people around the con, played a few demos but didn't want to wait in line for things like Keyforge, the indie games more than shone at the event, and some of the things coming out soon are definitely getting my money.


Stopped midday for a snack, prices were what I'd have expected from Alexandra Palace, and that's something that the organisers will have to look at in years to come, the less we have to spend on food, the more we can spend on games and the happier everyone will be.  It's a constant struggle at every con, the food retailers know they have a captive audience and they play to it.

Then to the part of the con I'd been looking forwards to, the games room.  I know that the focus of the convention was more board games than other games, so I wasn't expecting masses of games, but I also believe wholeheartedly that without games to play, the convention becomes just another market. 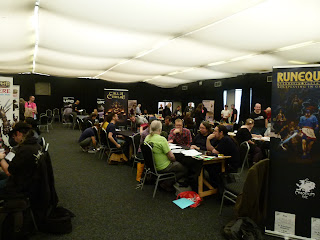 There were a few games available, and I got into a Pathfinder Playtest game run by the excellent Dave Harrison, our group prevailed somehow (I swear we rolled more ones than any other number), and evil was vanquished.


Stayed in the games room for a few hours catching up with people I normally don't have time to catch up with (the unfettered joy of actually going to a con where you're not working :) ) and then one last time around the trade hall before heading into London to catch up with friends.

The following day we arrived around ten, this time coming up in the car (I live in Barnsley, so we were going straight from the con to home afterwards), and having to walk up the hill.  How I missed that shuttle :)

Experience of multi day conventions is that there's always a main day, and everything else seems quiet by comparison, no different here, but it was good to see that there were still people coming in, many of whom had not had chance to go the previous day due to work or other commitments.

The other thing that was most noticeable for me was the lack of volunteers at the show. I know that Tabletop Gaming Live is a commercial venture, so they wanted professionals for all things, but at every other convention I've known, there's always help from the gaming community.  Whether its for running games, doing demo's, organising events, or doing seminars, there's an army of people out there who want to see things like this succeed. It's having the extra events, the games to play, and the times to enjoy that make conventions more than just a marketplace.

The Alexandra Palace staff were professional at all times, many traders were keen to point out that all issues they reported to the staff were dealt with quickly and efficiently, but they weren't enthusiastic the way most volunteers are, and as has been pointed out elsewhere, they weren't paying attention the whole time, so walking in and out of the venue without a pass apparent was possible, something that really needs to be addressed for next year.

There wasn't a bring and buy, which is often a huge draw (both for punters and on convention resources) for a convention, and there weren't any drop in games other than the ones being run on stalls.  All of these have been noted in the organisers address to the community and dates for next year have already been posted, being the same weekend again.

An audacious start, I'm still not convinced that a two day convention in London works for anyone outside of London, but I'll be interested to see where they go next year with this.