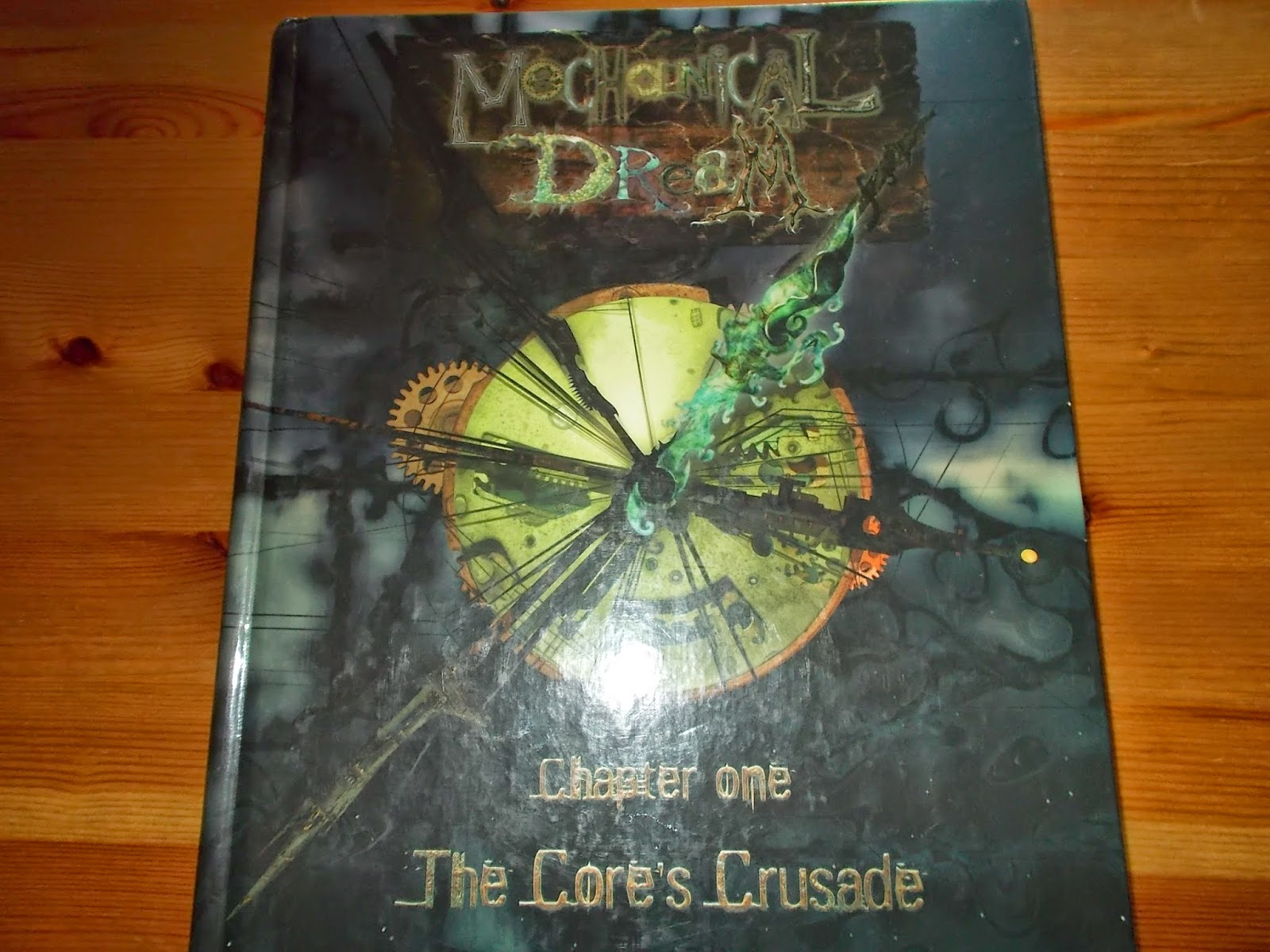 Back in 2002, a friend of mine showed me something that I was never going to forget, it was a roleplaying game called Mechanical Dream, with a main rule book that literally flipped from the light side to the darkside, having the mechanics and rules and character creation on one side and all the sections involving the world on the other.  Just reading through it had me hooked, and in the manner of all gamers with any trace of real gamer DNA in them… 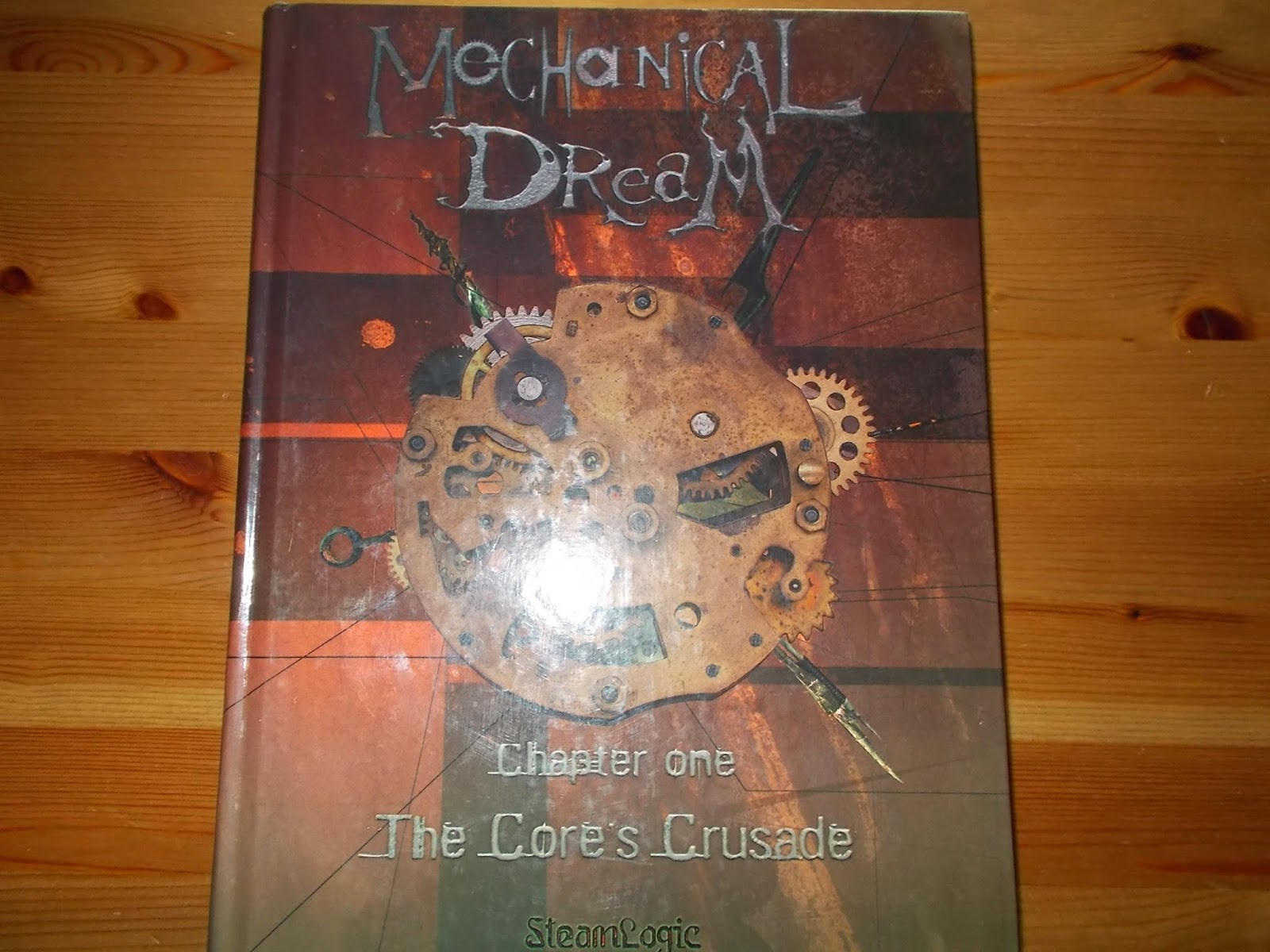 It had to be mine…

So, bought it, read through all the fluff, in which it describes the world that the characters exist on, with the planet being a huge circle of darkness called Naakinis, upon which was a circle of light some 30000 miles in diameter called Kainas, with this being circled all the way around by a wall of impenetrable darkness more than forty miles high called the Sofe.  Light is provided not by a sun but by a rotating pendulum and the whole world is subject to the vagaries of both the day and then the period where the light does not fall and a phenomenon known as the dream falls upon the world that the characters live in. 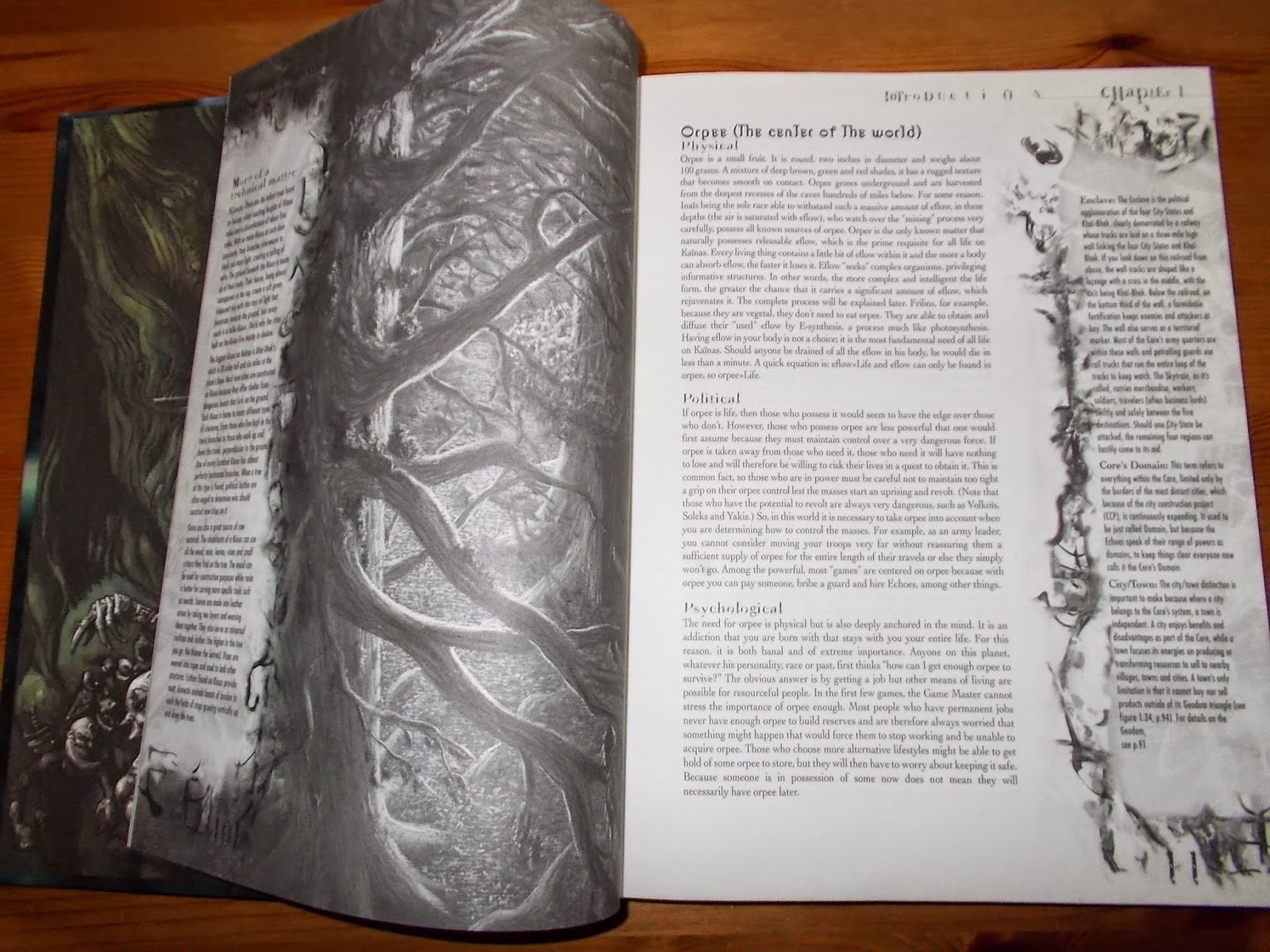 The dream is a manifestation of the built up energy of the world, where the consciousness (or subconscious) of those who live in the area is given free reign. The longer a place has been lived in and the more people that live there, the stronger the dreams effects upon the world, so cities that have been around for hundreds of years where once thousands lived can be massively affected by the dream, whereas new cities only just established may be comparatively safe in comparison.  When the dream falls, reality is affected in a number of uncertain ways and strange effects can be seen through the world.


With regards to the world itself, the problem was that there were very definitely two different parts to it, Kainas, where everything was normal sized, and Naakinis, where everything was absolutely not, and tree’s miles high, rabbits the size of elephants and all manner of other things were roaming freely.  The barrier provided by the Sofe was not impenetrable, but provided a convenient deus ex for why people never went any further than the boundaries of the barrier.  There were ten different races upon the world, ranging from the physically powerful Volkoi to the mentally strong Zin, and the plant based Frilin, each of them having a clear place in the order of things on this world. 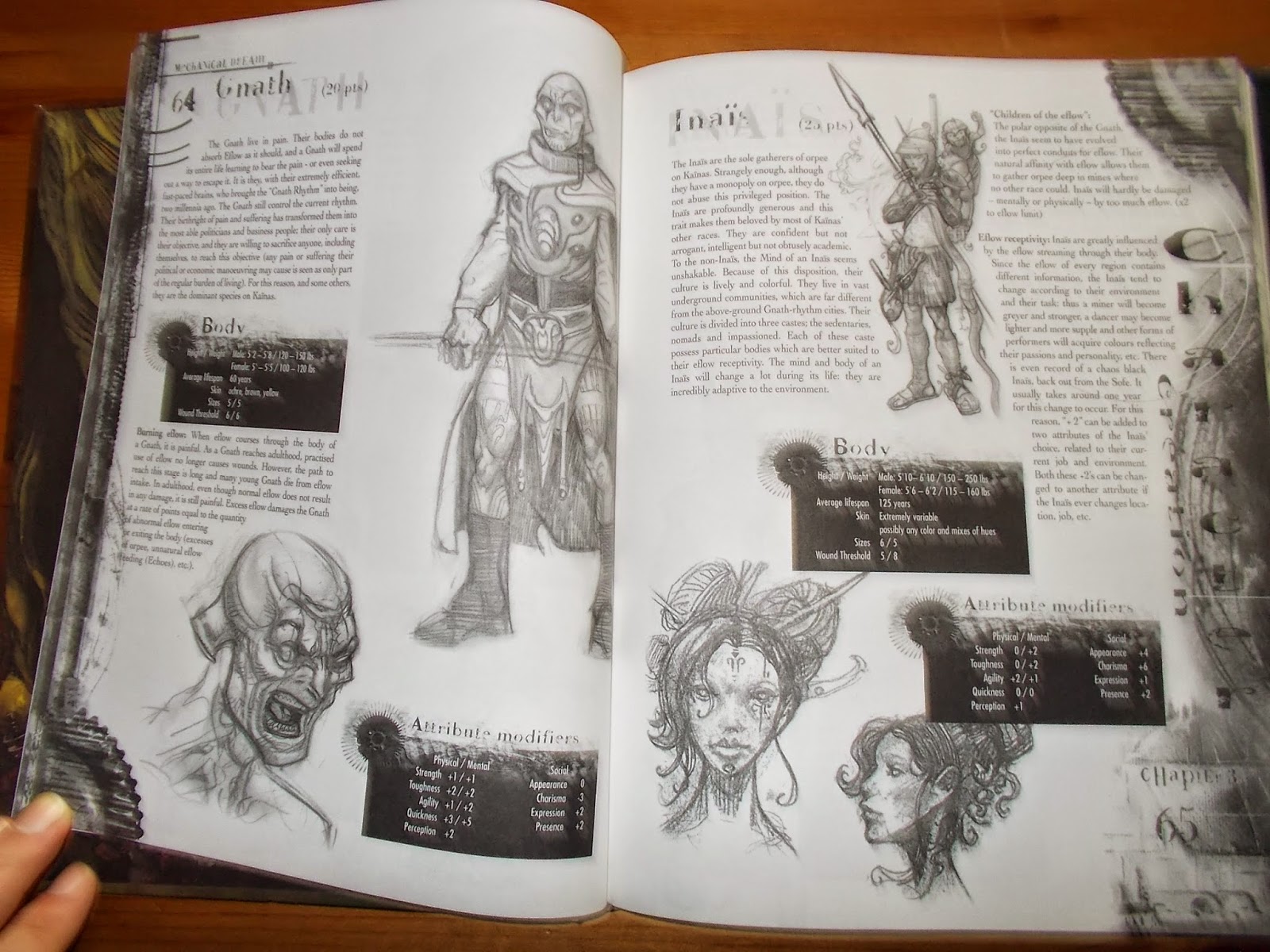 The writing in the book was mesmerising, both poetic in its expression but clear in the understanding of it. There were no fighters, no magic users in this game, instead the players took on the mantle of Echoes, members of each race who were able to channel their Eflow (Chi, The Force, whatever takes your fancy), to use their various gifts and gain information through something called a Whisper, which is the voice of Eflow that speaks to them. 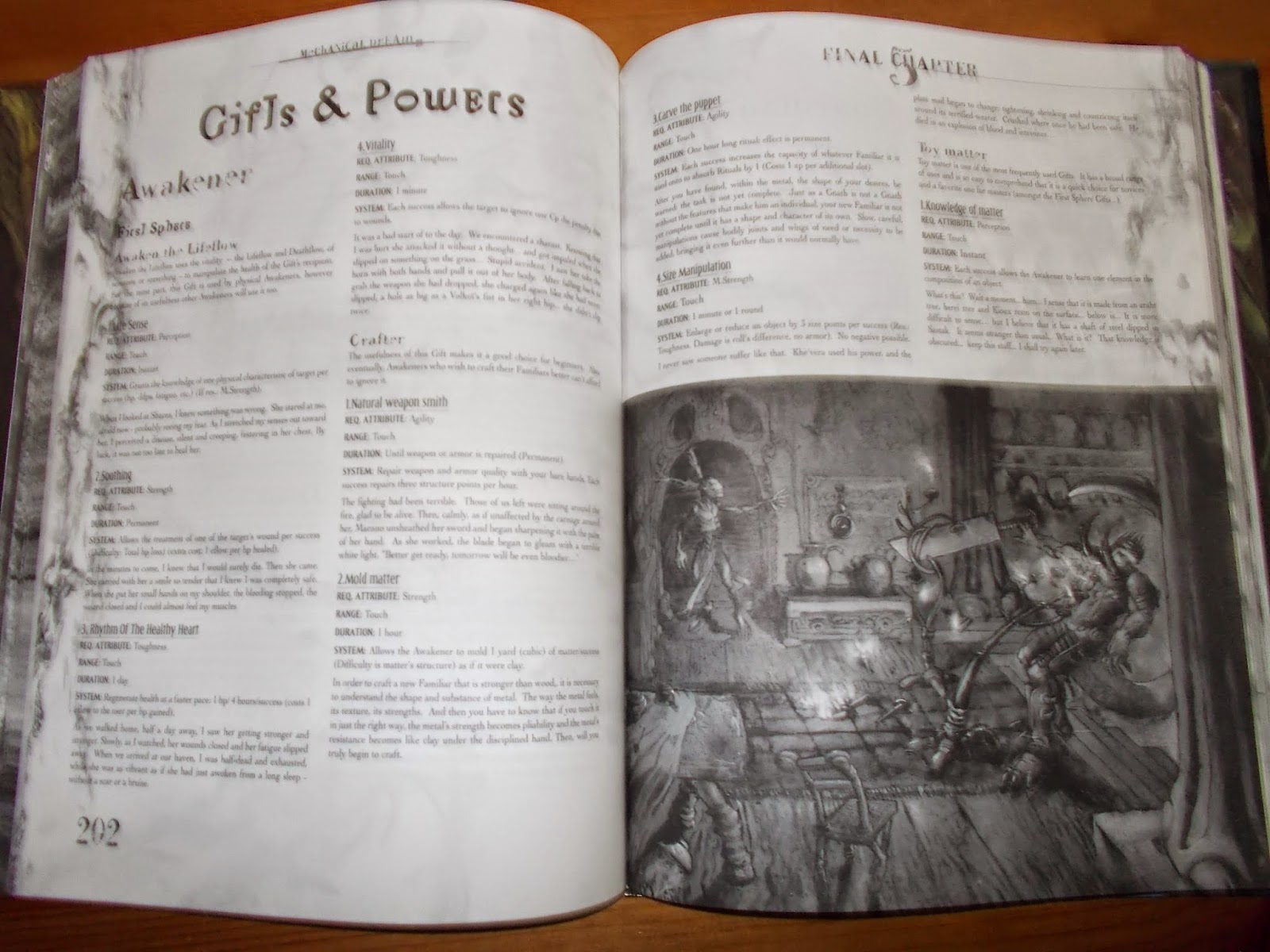 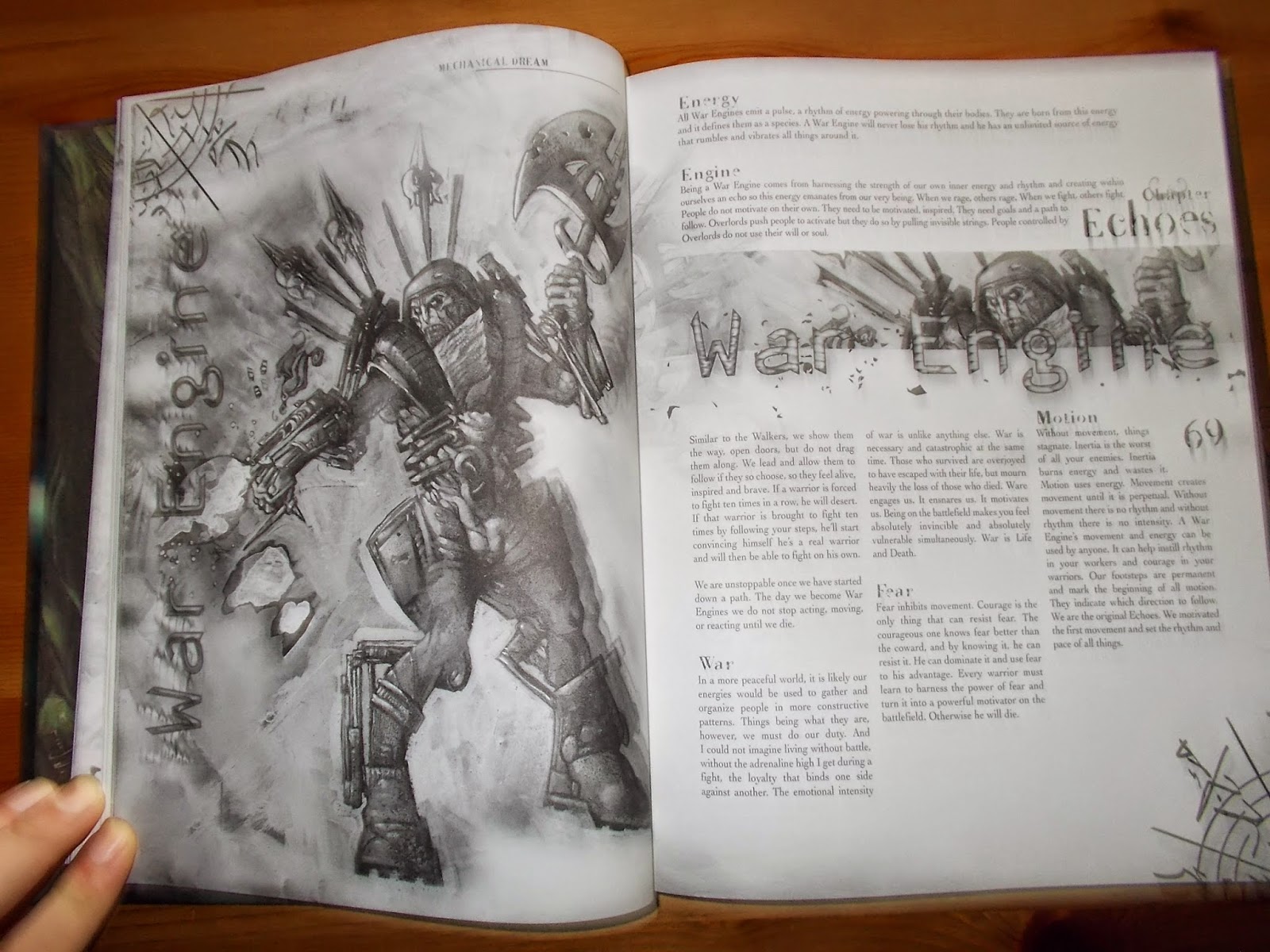 Character classes were imaginative, from the Judges who walked the world like those from the Mega Cities dispensing justice for the greater good, to the Nightmares, those completely taken over by the power of the dream that wandered the world doing only what the Dream bid them do and in turn, were as far removed from the normal world as any creature could be. 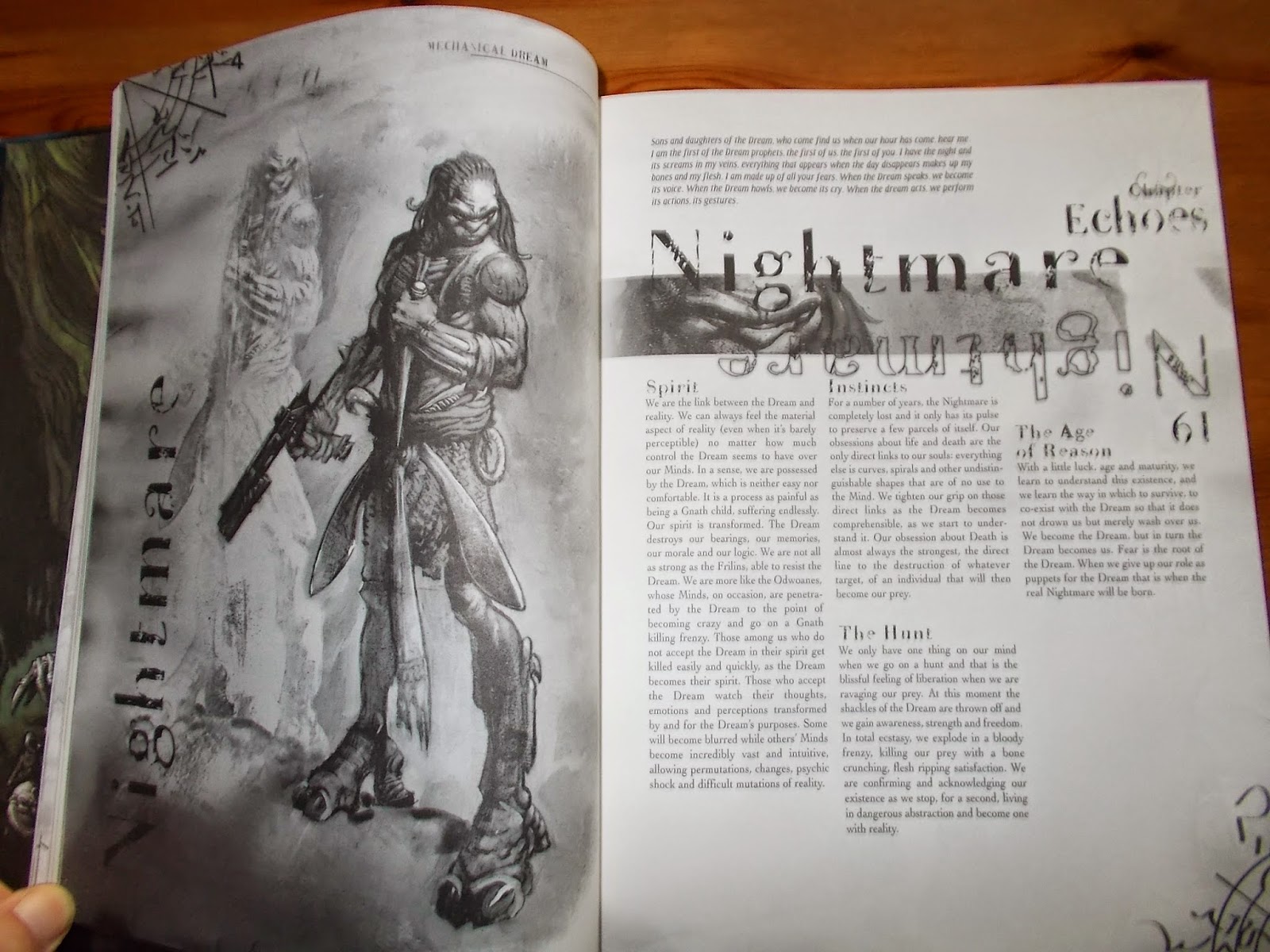 The book itself was excellent, with the same artwork in the inside cover, but changed in a subtle manner to show the effects of the dream on the same scene, the flip nature of the cover and the massive amount of artwork within was a testament to the amount of work that had been put in by the creators to make this exactly what they wanted. 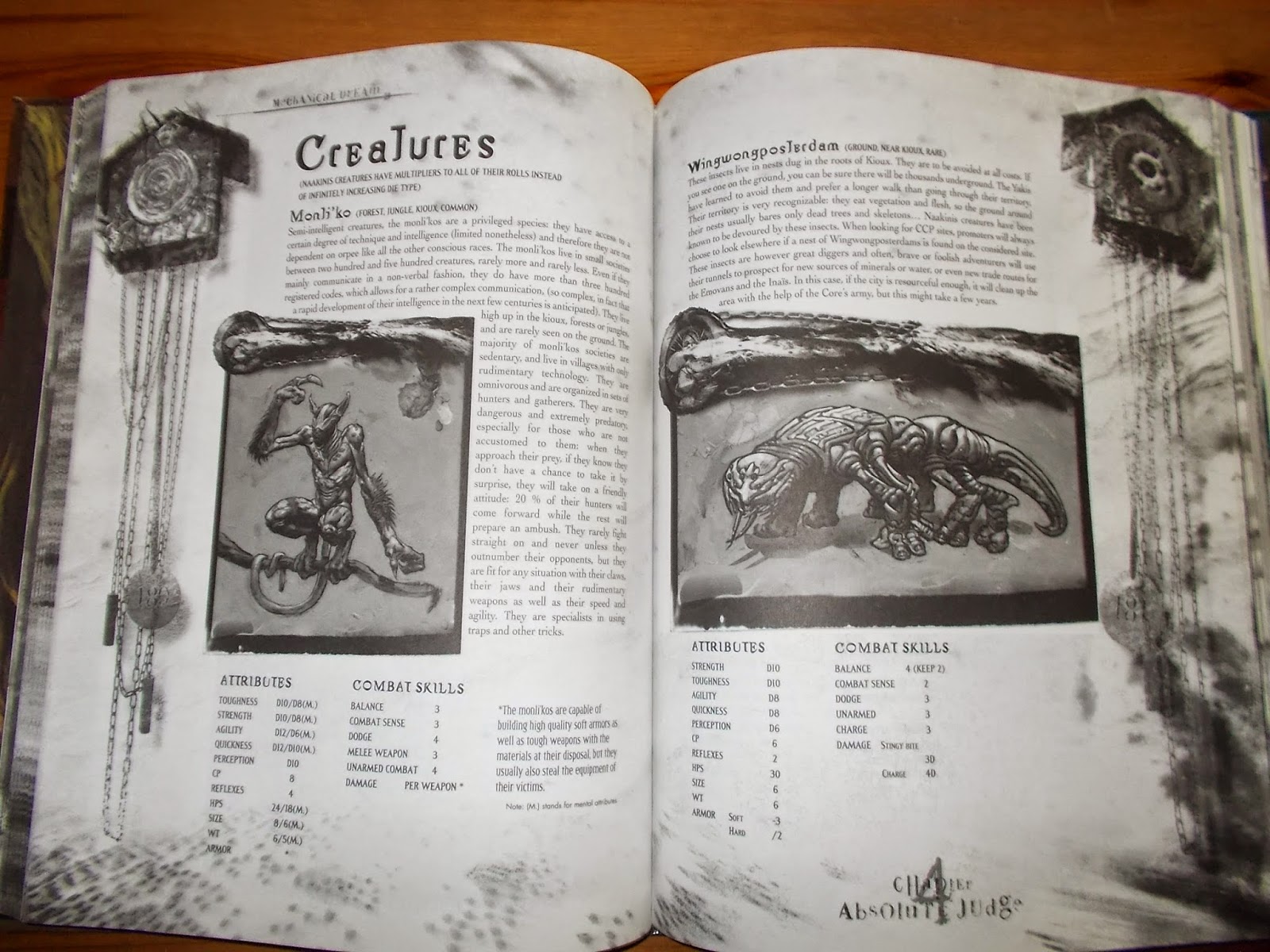 There was everything you needed to play the game in the single book although a second set of books were released in a slipcase format that detailed a whole variety of different things, with only one particular difficulty…

They were all in French…

The Problem with Mechanical Dream, and the reason that I’ll never get to play it, is that while we always reach towards the stars when we’re playing, being locked away in something from which you’ll never get out (even if it is the size of a planet in and of itself) creates a sense of imprisonment and with it, a sense that you’ll never achieve the potential that other games offer, even though said potential is just as elusive in those games as it would be in this one.  In fact, the very nature of the world is that everyone is fighting to stay alive every day, stealing from others is not only normal but encourages, cruelty is a part of everyday life, and for a world where the light is provided by artificial means, there is no secondary pendulum to provide the hope for the inhabitants. 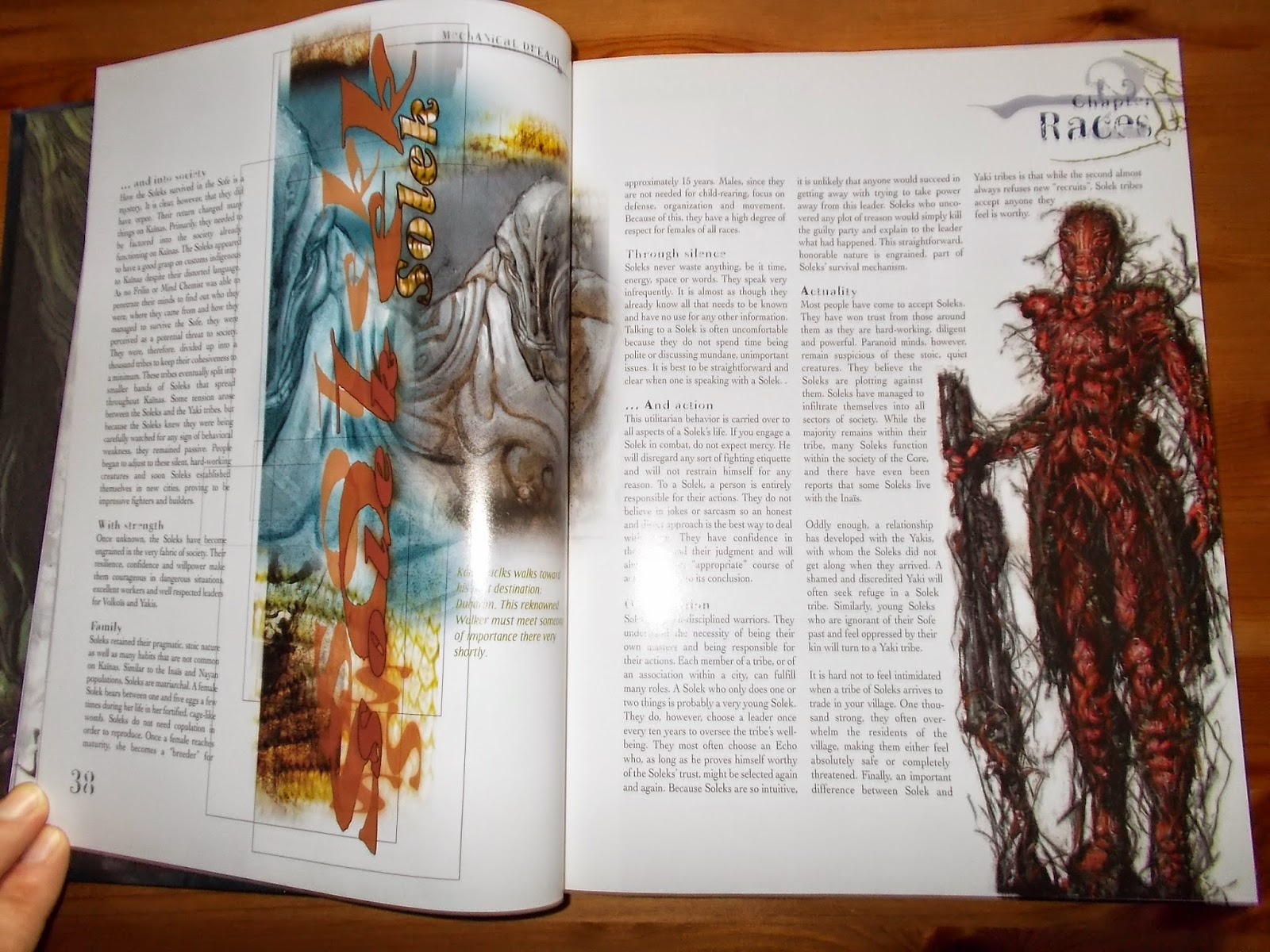 The game system is reasonable, although clearly not playtested as much as it should have been, and the background, while massively intriguing, does not provide impetus for what the characters would be doing rather than trying to survive every day, there is no career path to climb, no evolution of the storyline and because it was a reasonably expensive when it came out, it didn’t get the level of interest that it perhaps should have done. 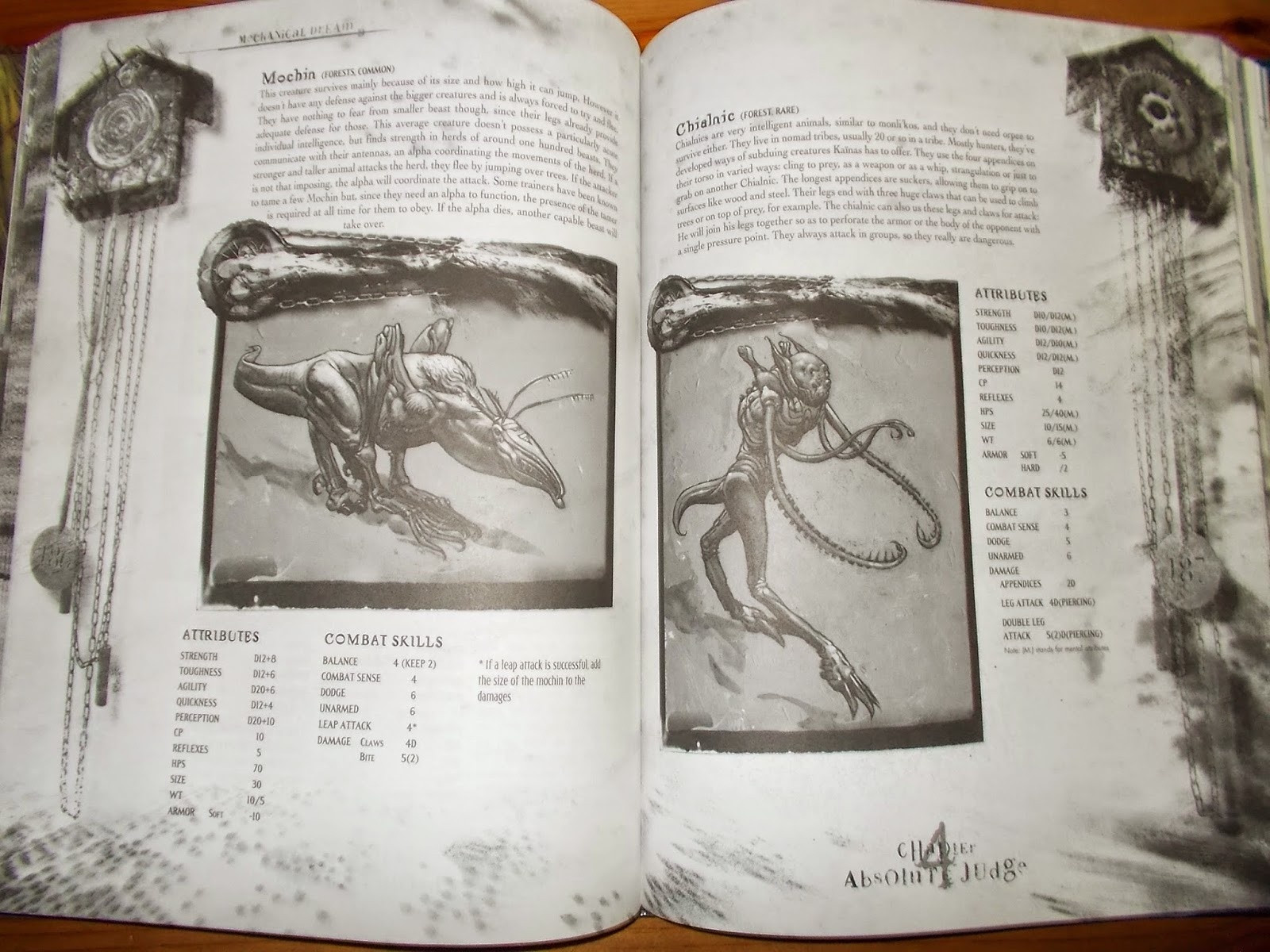 This is a product that was clearly two peoples dreams, they saw this, they had a vision and they made it the way they wanted to.  They dreamed, but as in the game, the dream can often turn out to be things that you didn’t want as well and by 2004, the company was bankrupt.

Which is a crying shame, it truly is, something with this breadth of vision and boldness of direction would surely have done well had it been released in later years, as other people are embracing new worlds now with the same vigour that the creators did ten years previous.