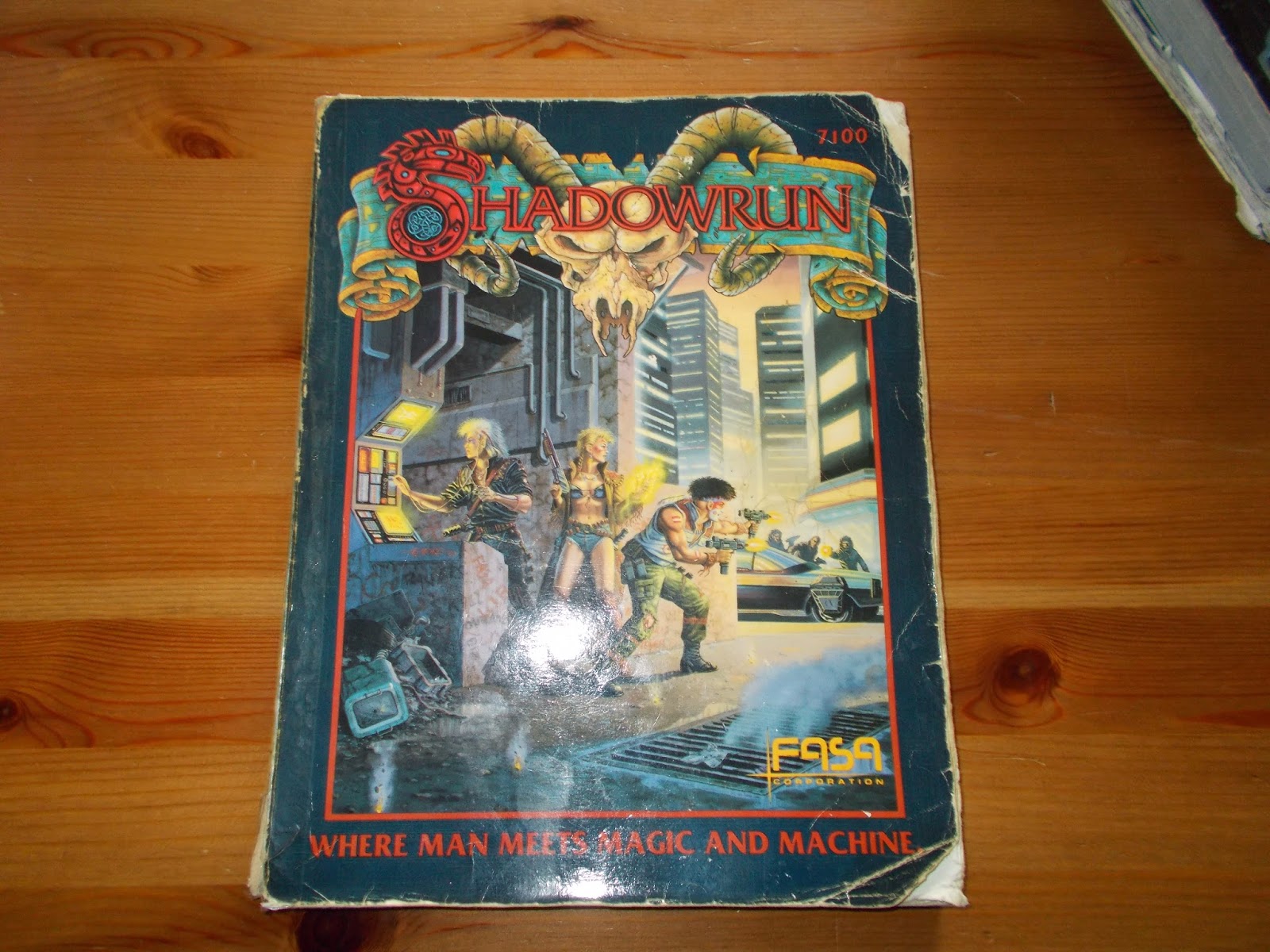 If the truth be known on this one, the answer is all of them, there’s never a time when a game that’s done you some good in the past can’t be some good to you again.  But it also brings the invariable question of what makes a game old?

It’s not as if the hobbies only been around for a short while, and with that in mind, I’m working on the premise of old as being anything that’s actually older than my son (who’s 23), so from a time when officially I was still a kid and not looking after one… 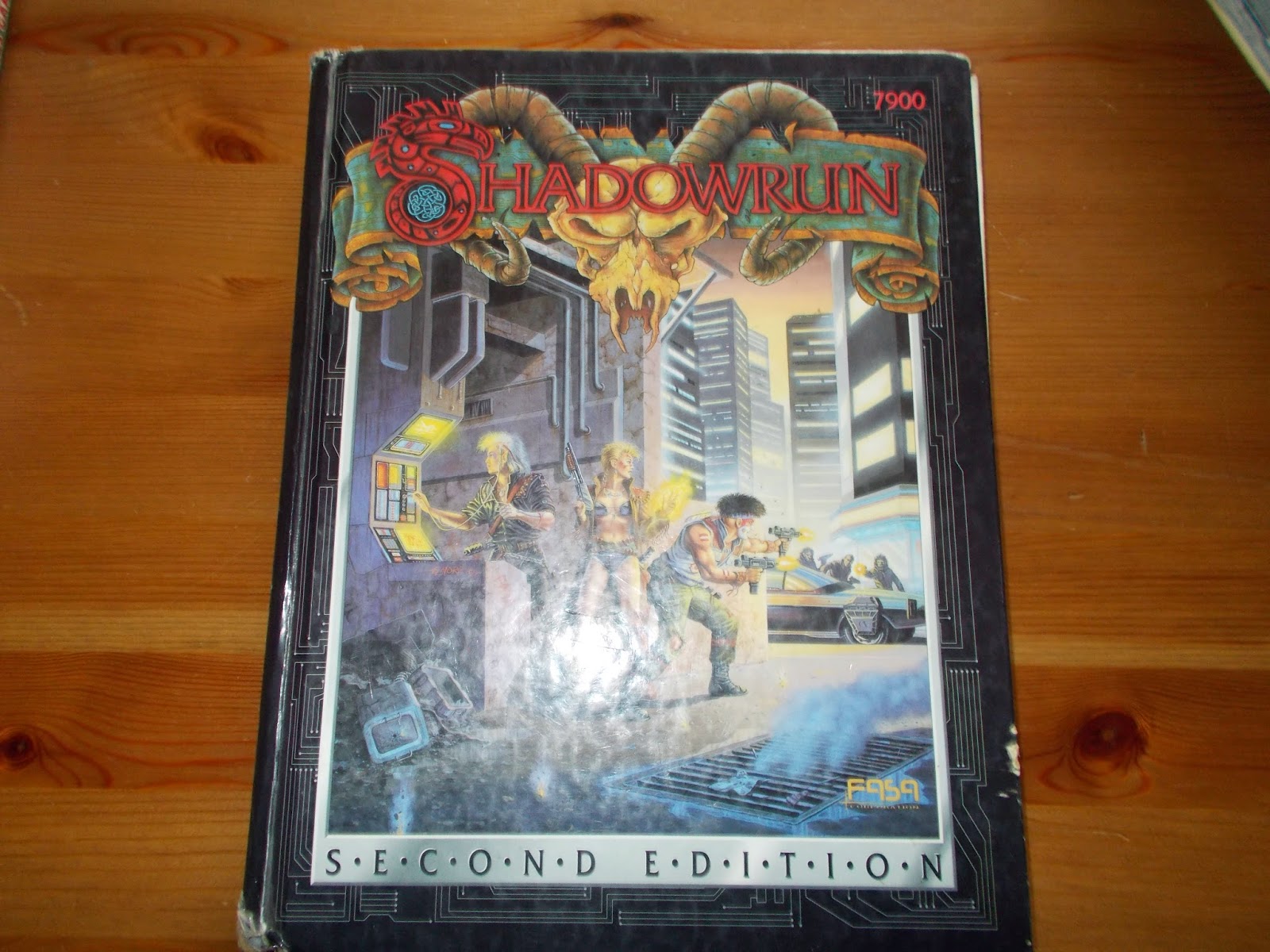 With this in mind, Shadowrun is the game that I’m looking at, more for the point that the game that I started playing all those years ago is not the game that it is today, and it’s good to see how things have been evolving over the years.  Way back in the day, deckers needed cables and plug in points to get into the matrix, now they just wander around and use the WiFi to do as they please, even though theoretically, they should have been doing it all the way back then.  As with all things, games designers are restricted by the things that they themselves have actually considered, but it’s good to see that when technology moves forwards, we move with it. 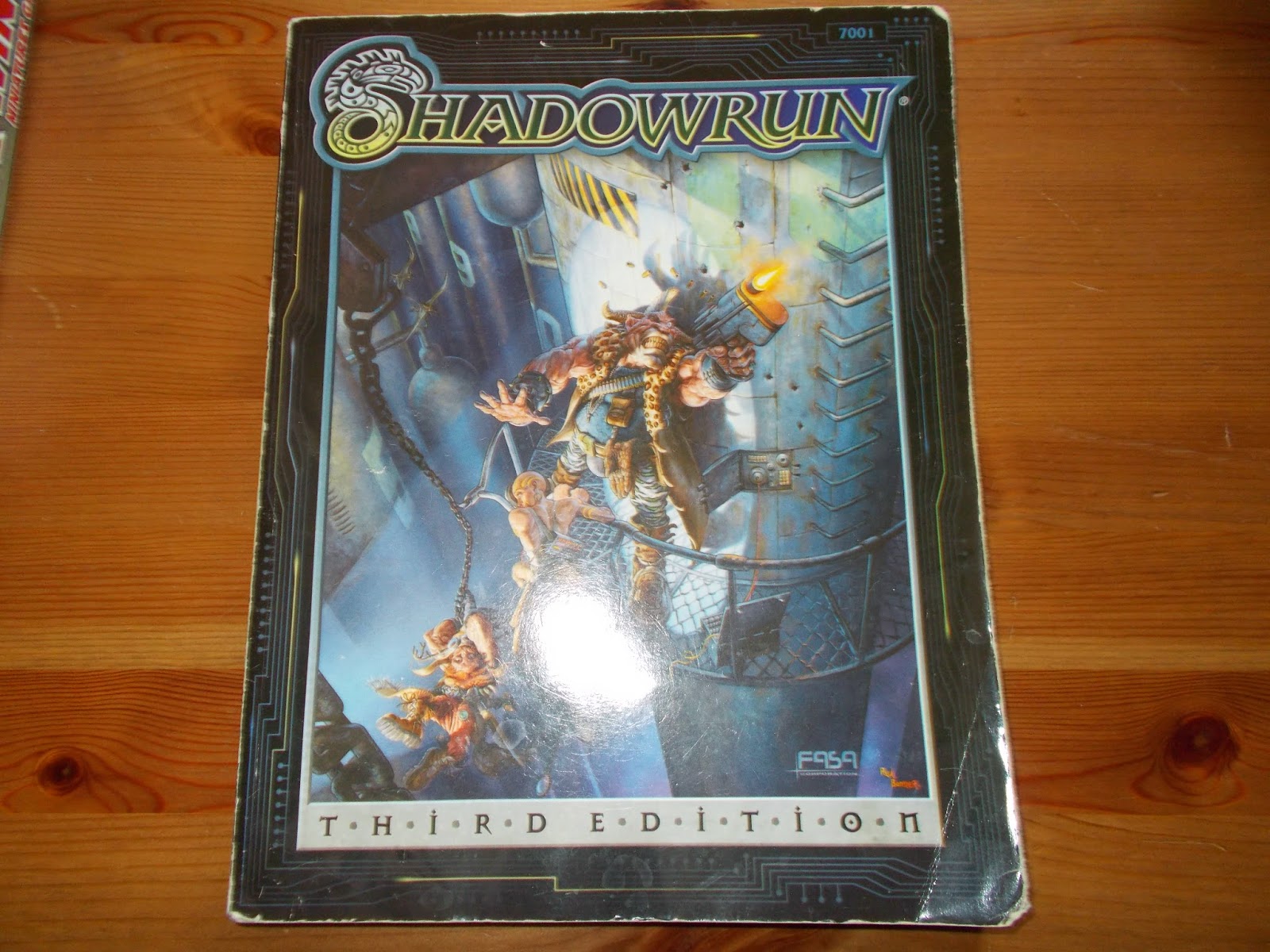 The first Shadowrun was a revelation to many, the inclusion of both magic and metal, fantasy and firepower, in the same setting allowed many to get on with doing things that they’d always wanted to but never quite got around to doing, and then there was the way it was presented, you didn’t have fighters and magic users, you had Shamans and Street Samurai , there was a very strong visual aspect to the game that brought you into the world and held you there.  Sure there were problems with the system, get enough pluses together and you could have a human withstand a hit from a rocket whilst they were clad in nothing but their pants, but minmaxing is not an uncommon concept then or now, so while you could do it, you’d missed the point of the game if you were doing it.

What made this game brilliant was the depth to the world that was presented in the main book, you could run the whole game from the first book and never need anything else.  The style of the game was different from its main competitor, Cyberpunk, in that it didn’t present everything as stylish and all about the image, this game was all about surviving, and as I’m sure I’ve mentioned before, in 80’s Yorkshire we knew nothing about style, the haircut alone was proof of that, but we knew everything about surviving. 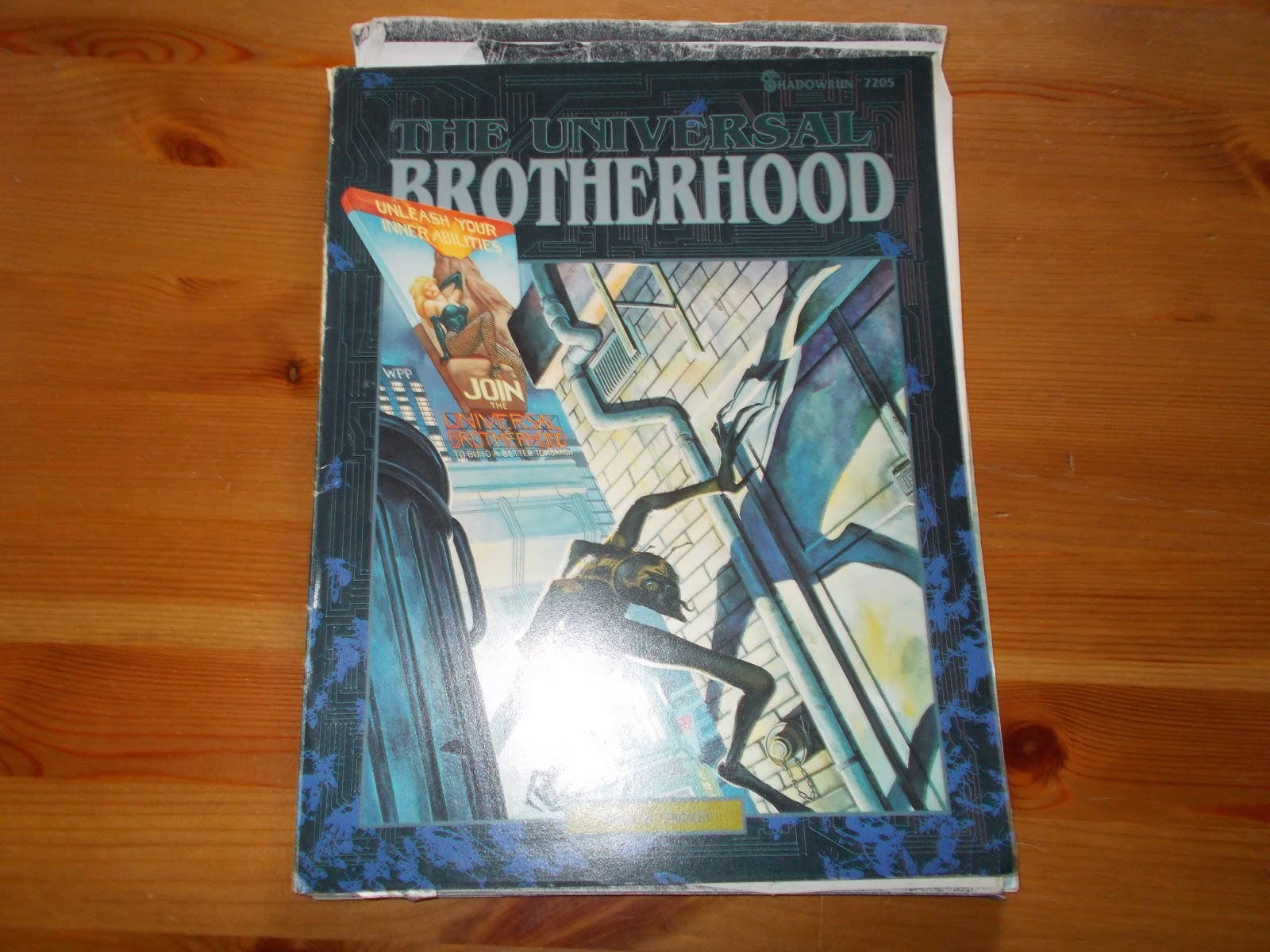 So this was a game for us.

As to why I still come back to it, it’s not just because it’s a trip down memory lane, I liked the way that the skills came together, I liked that if you had cyberware, you became less able to do magic, I liked that they’d thought it through so that you couldn’t go supercheese (Hello Rifts) and have the best of both worlds.  You had to choose which way you were going to go and then make sure that you stayed on that path because deviating from it would mean that you dulled the edge that you’d got and that’s never a good thing.  I also come back to the massive number of supplements for the game, from the Rigger handbooks and the Cannon Companions and all their merry joy to the darkness of Bug city and the silent menace of the Universal Brotherhood, they knew they had an audience and they played to it and for those of us that couldn’t get enough of the background, there was always more. 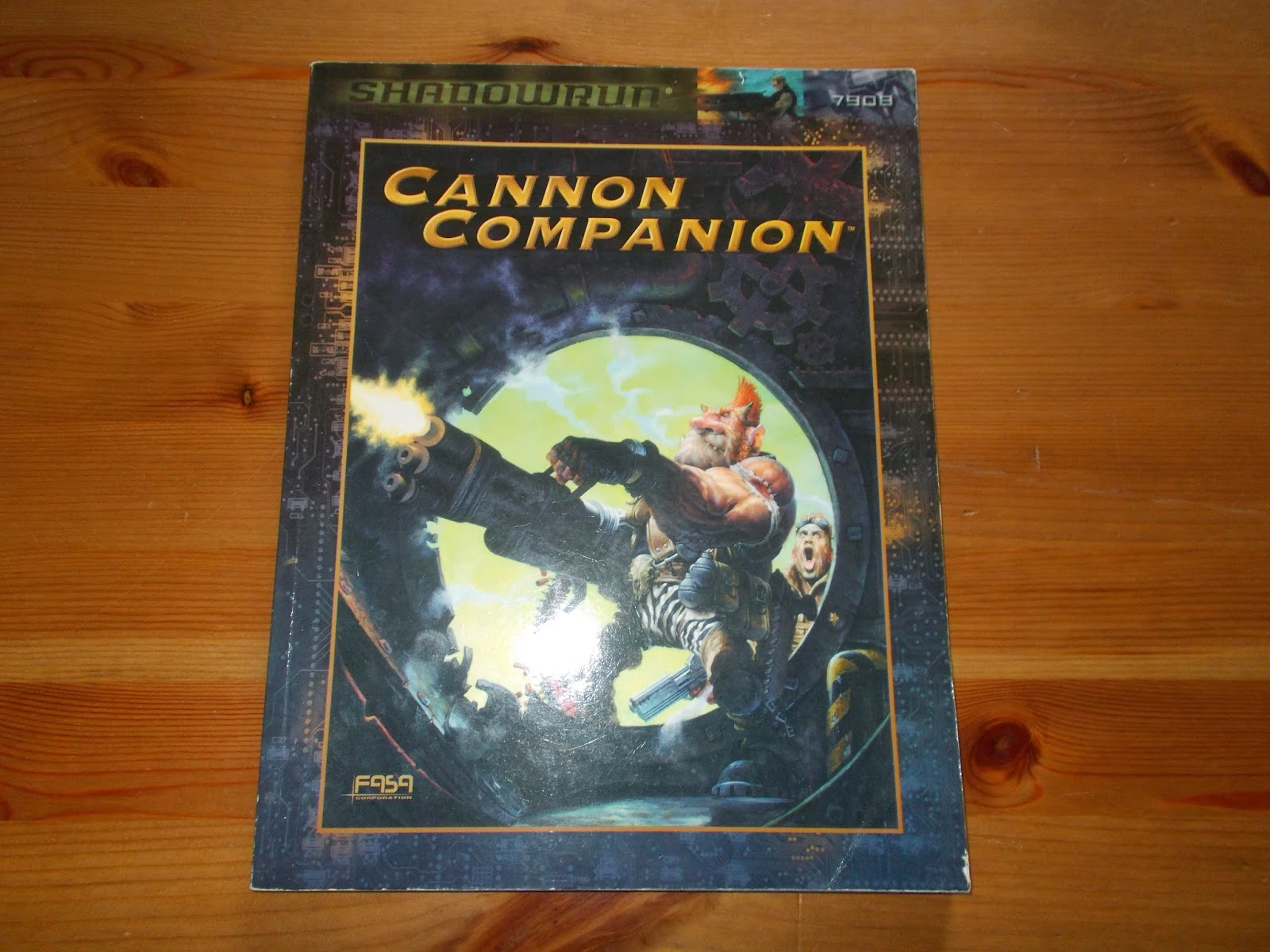 And the point of it is that they hooked you in the initial book with less than thirty pages of fluff, a basic description of Seattle (ten pages), a story (four pages), and a history of the world (eight pages), everything else was crunch, all the rules you’d need to play in the world, but those pages of fluff were so well written that you wanted to get into the world, you wanted to play those characters, you wanted your D&D mixed with your Cyberpunk and that’s where the interest spiralled in.

Second edition wasn’t much different from first, same background, more gear, more goodies, but things hadn’t evolved that far.  Third and Fourth changed the world some more, campaign books started coming out, the world near ended a few times, and they never made the mistake of covering the same topic more than once.  New gear, weapons, and vehicles to be sure, but most of it was background, campaign materials, things that would help you run the game, catalogues of interesting (and I do mean interesting) NPC’s, not just the block of stats and three lines about their favourite cat, these individuals had background, personality, and purpose.  You wouldn’t find them showing up anywhere, and if you encountered one of them, you knew there was a damn good reason why you had.

Things got a little more lethal with each edition, the same rocket shell that you could bounce in the first edition would splash you to the four winds in fourth edition, and then came fifth, and with it, another quantum shift in the game.  It’s one of the few games I know that have been evolving along with the world outside.

The first MRB was 200 pages, the current one is nearly 500 pages

But despite all that’s changed, it’s still Shadowrun, it’s still the game we started with twenty five years ago, but just like some of us had to...

(I don’t include myself in the last statement, just so everyone is clear...)
Posted by John Dodd at 02:59