Does having a cool character sheet help enhance the playing experience?

Certainly does for this man, it could be my particular OCD that works on it, but for me, the sight of a well drawn out character sheet, everything where I can find it on the one page and nothing to have to flip through, look up, cross reference, or otherwise makes me very cheerful.

So when it comes to character sheets, there are a few different ones that really got my attention, and all of them have something in common with the game that they’re designed for. 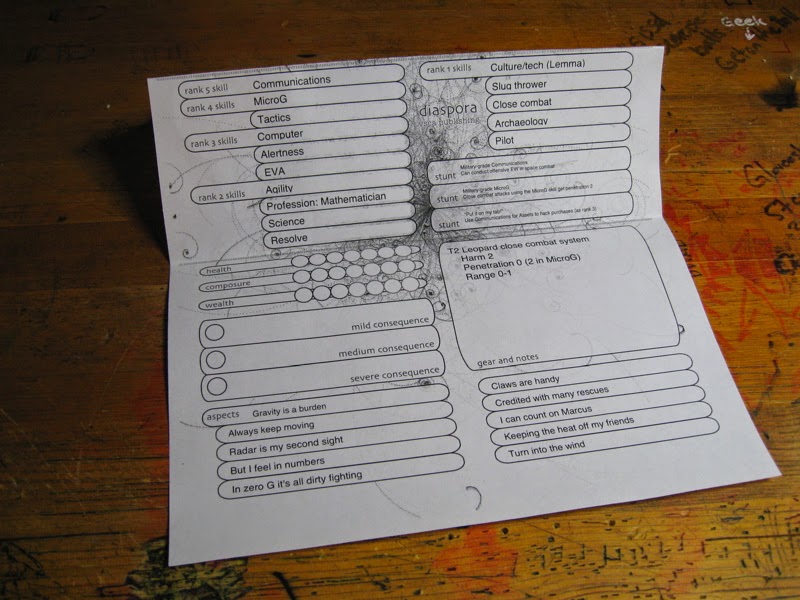 The first is the convention character sheet for Diaspora, beautifully simple lines complimented by the swirling pattern of stars in the background and when you put it on the table, everyone can see who you are and the basics of your character which helps everyone get into the game so much more easily. 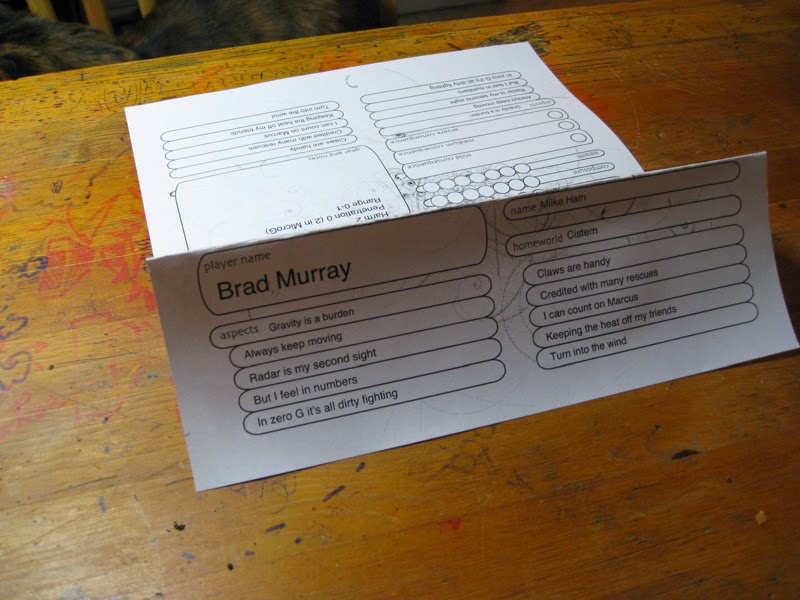 The second is the character sheet for spirit of the century, not the original mind, but this one. 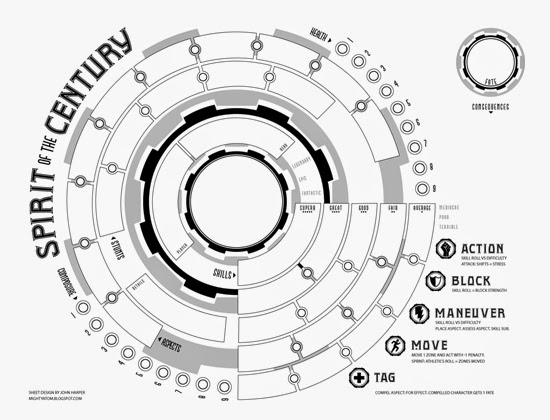 What I love about this is the way it’s been done to show the simple grace of the character whilst making it interesting to look at.  I know there are people out there who have problems with character sheets that have writing at all angles, but I’m really not one of them.

It was things like this that I looked into when I thought about the character sheets for my own game. I wanted to make sure that it gave the right impression when they saw the character sheet.  On the one hand, drawing such a sheet would be impossible, you’d spend days doing it, but we’re in the days of printing and photocopying now, so what was once a three hour task is now a five second button press, so character sheets can evolve beyond the mass of text and spaces for numbers that they once were. This in turn brings into play the ideas that if you can get an idea of the game from the character sheet, will it entice you to pick it up if you wander past a game playing at a convention where the players all have amazing character sheets to look at on the table.

Certainly it is for me, but I started my formative years in roleplaying in a manner I imagine is much the same as many by doing the “Roll up a million characters” thing, the books of which I still have somewhere in the library of games.  What always got me interested was when you looked at the character sheet and something about it made sense to you, whether it was the original L5R sheets and the stylised method of doing the stats, to the huge soulless blocks of the rolemaster sheets that came out or (as I mentioned a few days back) the massive penfest that is the Alpha Omega Character sheet.

It’s like anything really, if you like what you see on first glance, then you’re likely to take a second glance, and for many people, particularly at conventions and game stores, the thing you check out is the character sheet, so when you’re looking at doing your own game, consider this, and don’t make it an afterthought at the end of the shiny bits of the game.