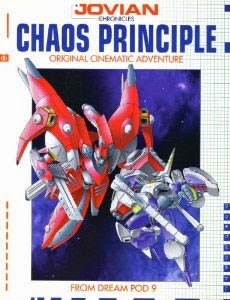 I’m a sucker for a good story, always have been, likely always will be, and it is this that I look for whenever I pick up an adventure that someone else has written.  Not the number of encounters that are in the adventure, not the challenge level of the monsters or the complexity of the puzzles (although I have to admit that it does help), no...

I look at how well the story has been thought out, how well it holds together and ultimately, how much fun the players will in getting through it.  It was some years ago when I was introduced to Jovian Chronicles, and thanks to the scenario that was played at the time (which will be covered in another RPG day question), I got the interest of finding out how well the scenarios were written.

There weren’t too many scenarios written for Jovian Chronicles itself, far more for Heavy Gear and other games that proved more popular over the years, but one thing that they did remains the best published adventure that I’ve ever seen.

Billed not as a scenario but as an original Cinematic adventure, it has already set itself a high bar from the point at which you open the book, but as I found when I started reading through, they were right to set the bar at that level.

It’s important to note that the Chaos Principle isn’t a beginners scenario, it’s not padded out in the way that inexperienced GM’s would need, there isn’t a detailed set of handouts and bits to read out to players, it’s designed for experienced GM’s.  It’s presented as a series of adventure points, each that leads into other options, culminating in a number of ways depending on the successes and failures of the players as they’ve made their way through the different parts of the scenario.

The game begins with the players being sent to investigate the possibility of some Ultra nationalistic influences into the various federations, and depending on which of six beginnings that you choose, the adventure can be angled to fit any type of group, from the gunbunnies to the thinkers and it’s that that makes the adventure interesting.  I’m not going to reveal any of the plot, but it’s an epic tale, half mecha, half mayhem, with enough puzzles and curiosities to keep any group engaged and get them to the endgame intact.

Unlike other adventures, this one has a path to follow, and while it sounds something of a railroad, the adventure will reach that path whatever the players do. The difference is that the ways in which the scenario gets around whatever the players do are subtle, and even a beginning GM could use them without the players thinking that they’d been steered in a particular direction.  What does it for me though, is that when it says that it’s an Original Cinematic Adventure, it really means it.  There are deaths, unexpected and expected, betrayals, massive plots that reach well beyond the range of the scenario and set things up to be epic for some time to come after the scenario finishes.

What does it most for me is that while the characters will never find out what happened after the scenario, the details are there, in the manner of an after the credits easter egg, and the poetry of that ending,  where one of the dead leaves his entire fortune to the man who caused his death, citing that while he may not like what he does, he did in fact very much like him, and there could be no better purpose for his wealth than for his enemy to live well upon it.

And I haven’t given away the whole adventure by saying that, but it gives an idea of the time and effort that Dream pod 9 put in to make the characters believable, to making them something that even on a limited scenario, people could care about.

And like any good film, it’s the characters that you care about that make it...
Posted by John Dodd at 15:11