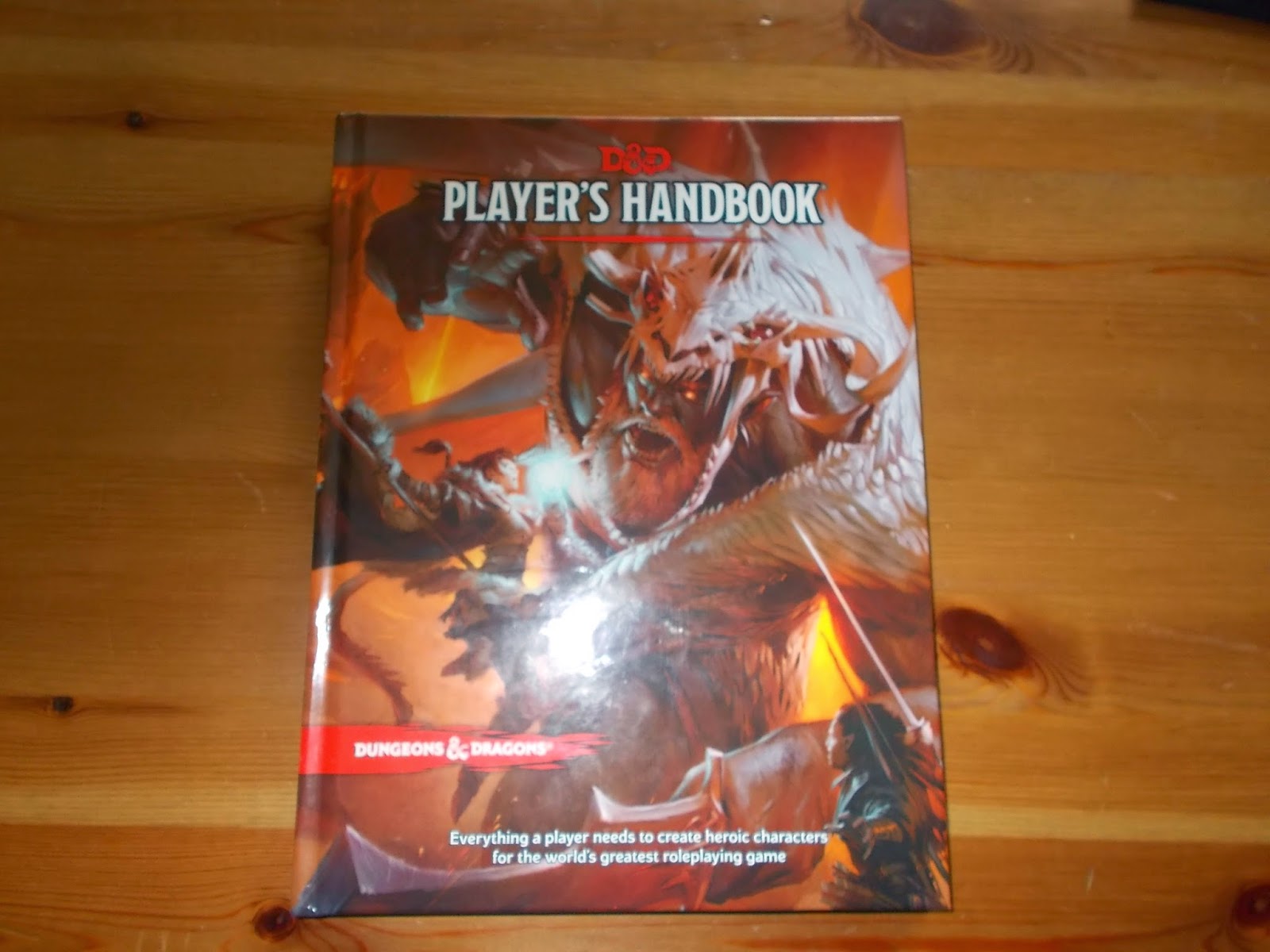 So yesterday I went down to the FLGS (that’d be Patriot Games in Sheffield), there to meet up with Pete Griffiths (Long Term D&D Fan and all round top bloke) to get my copy of the Fifth edition players handbook, generate a character and get introduced to the whole Adventurers league thing. 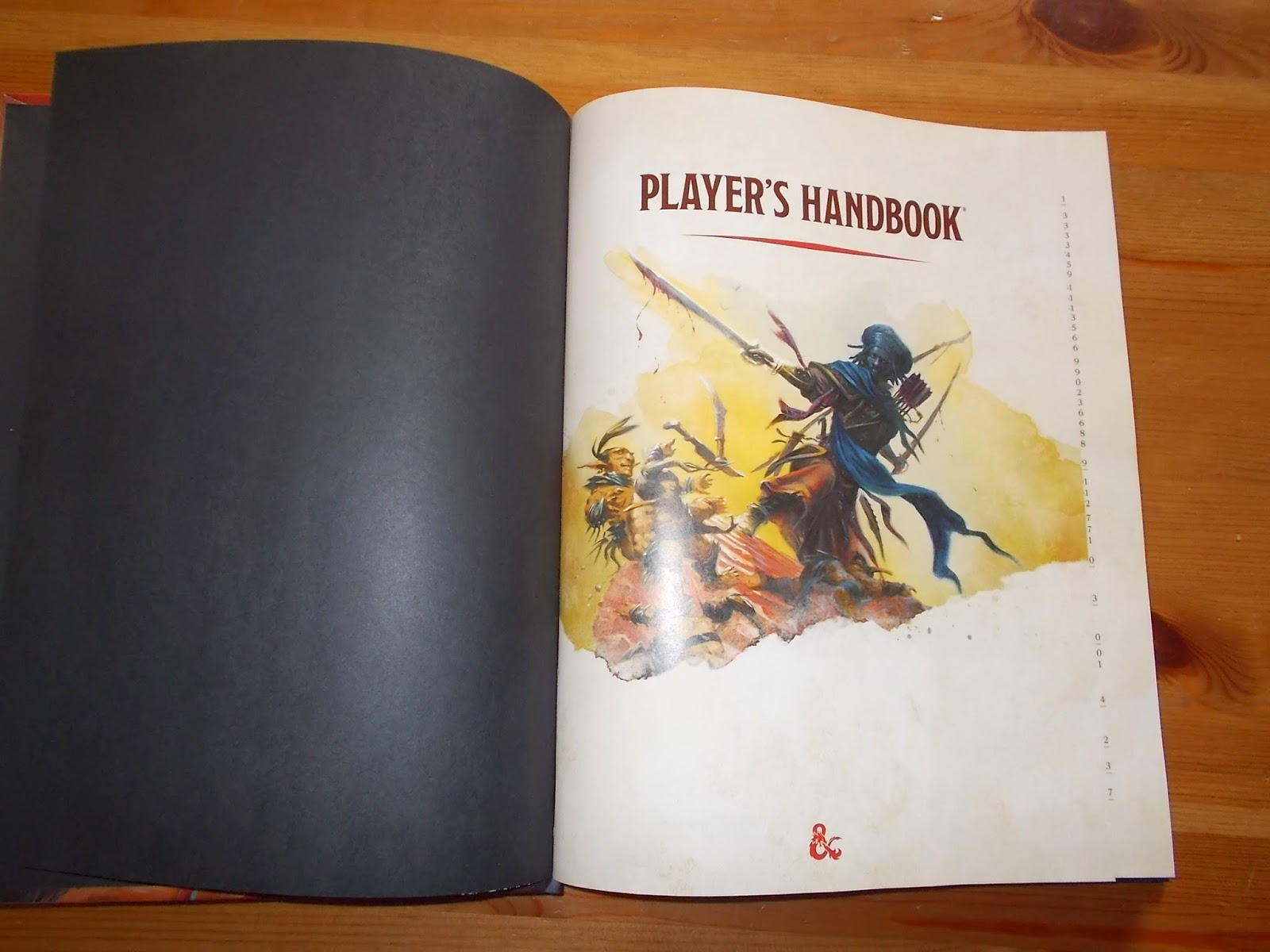 I was not the only one down there that evening to do the same thing.

I’ll put this in perspective, Sheffield is a town in the south of Yorkshire, famous for two things, Steel, and the Full Monty and in todays day and age, it’s debatable which one of those it’s more famous for...

So for the most part, people there tend to be serious and workmanlike, the Yorkshire ethic isn’t one of games and game playing, it’s of people working hard and grafting all day long.  Which is why when I went to Patriot games, it was really nice to see that lots (and by that I mean easily more than forty) of people had come down to the shop to get in on the action, generate a new character and sign up to the adventurers league. 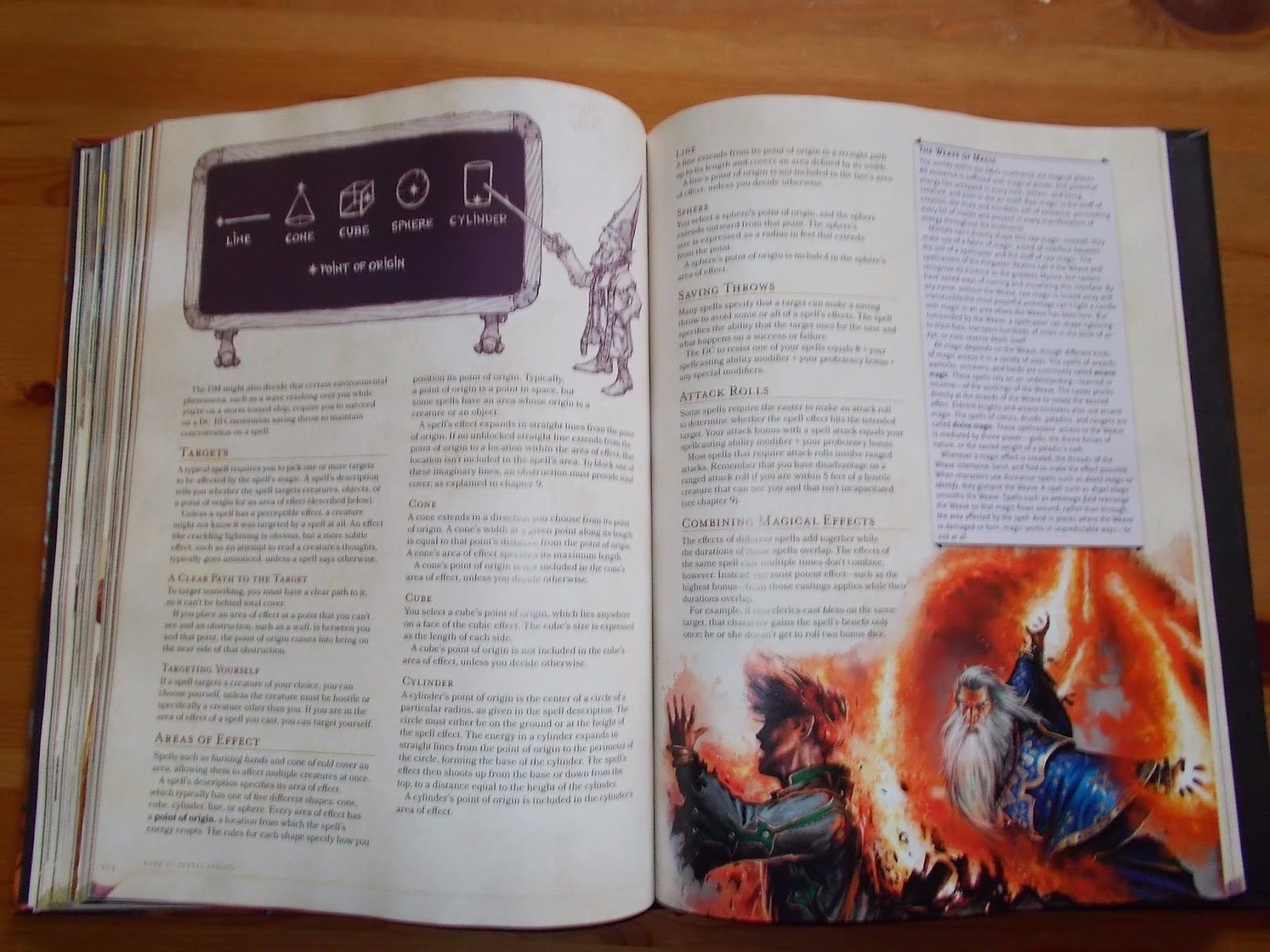 Less cheerful about the fact that I might well have been the oldest person there, but times can and indeed must change, and the new generation were just as enthusiastic as my generation had ever been about the new shiny.

A swift word on the book itself, production values are excellent, full colour throughout and nicely laid out.  I’ve heard a number of comments across the net on the lack of a quick start section for those people just wanting to bang straight in, get a character, and get adventuring, and here’s what I have to say to that. And I know that in the past, I’ve bemoaned the lack of a quick start section in a number of things, but last night I helped a newbie through the process of character generation, and I came to a revelation.

He didn’t want a quick start section, he wanted to run through all the different possible options, he was interested to read what things he could and couldn’t do, and as a result, he was happy to read through the books in a way that perhaps those of my generation and those who’ve been playing for years, just aren’t willing to do.  If you’ve played the game for years, the rules haven’t massively changed, and you already have an idea of what you want to do, what character type, race, alignment and everything you want to play, and either way. 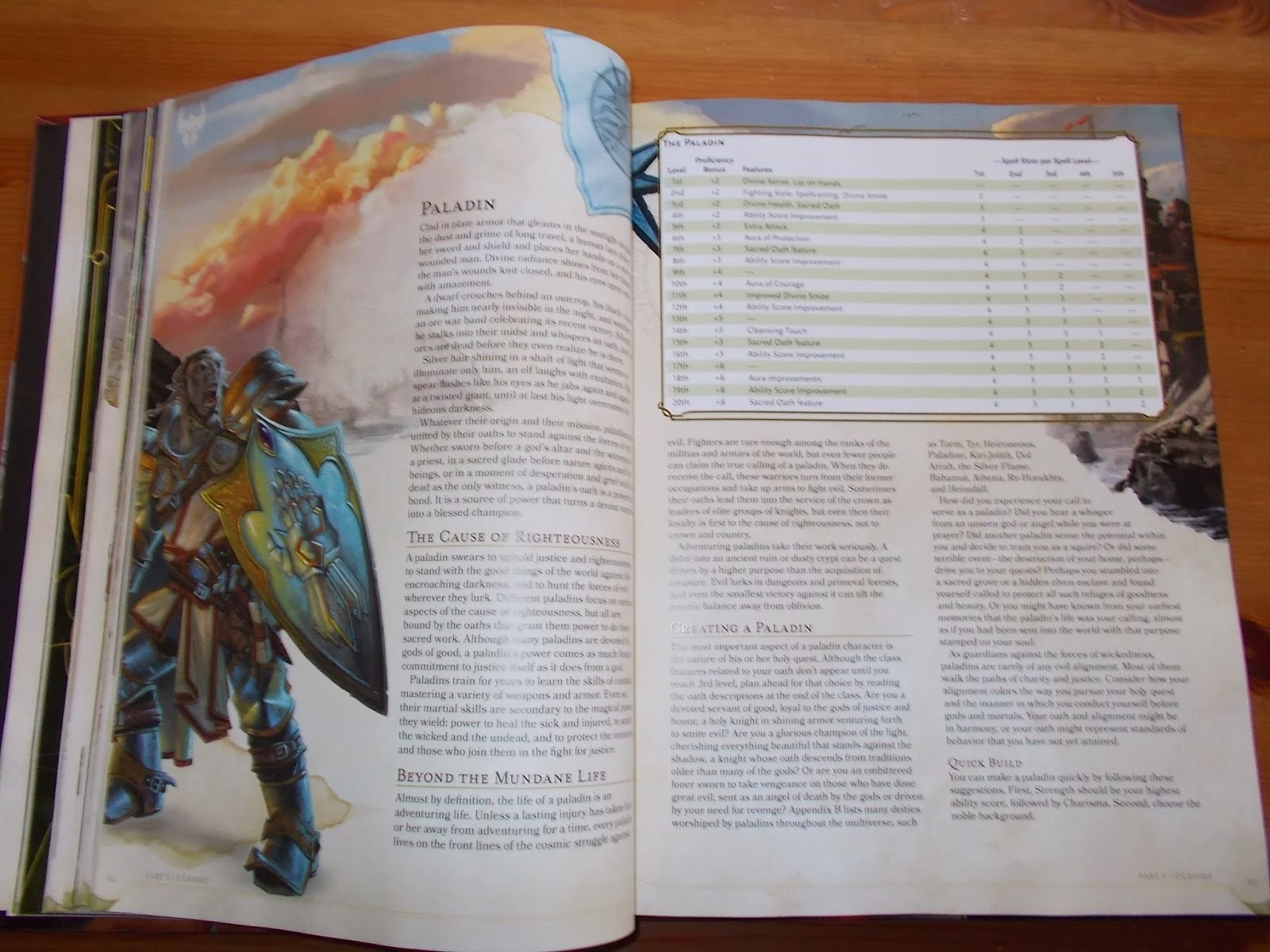 He ended up with a Barbarian Prince, flung far from his lands in search of adventure to the disappointment of his family and peers, all from reading through and picking sensible options rather than min maxing.  Now I have to say that I haven’t really played D&D for some years, lost all hope round about 4th edition and was fearing that 5th might look something similar. 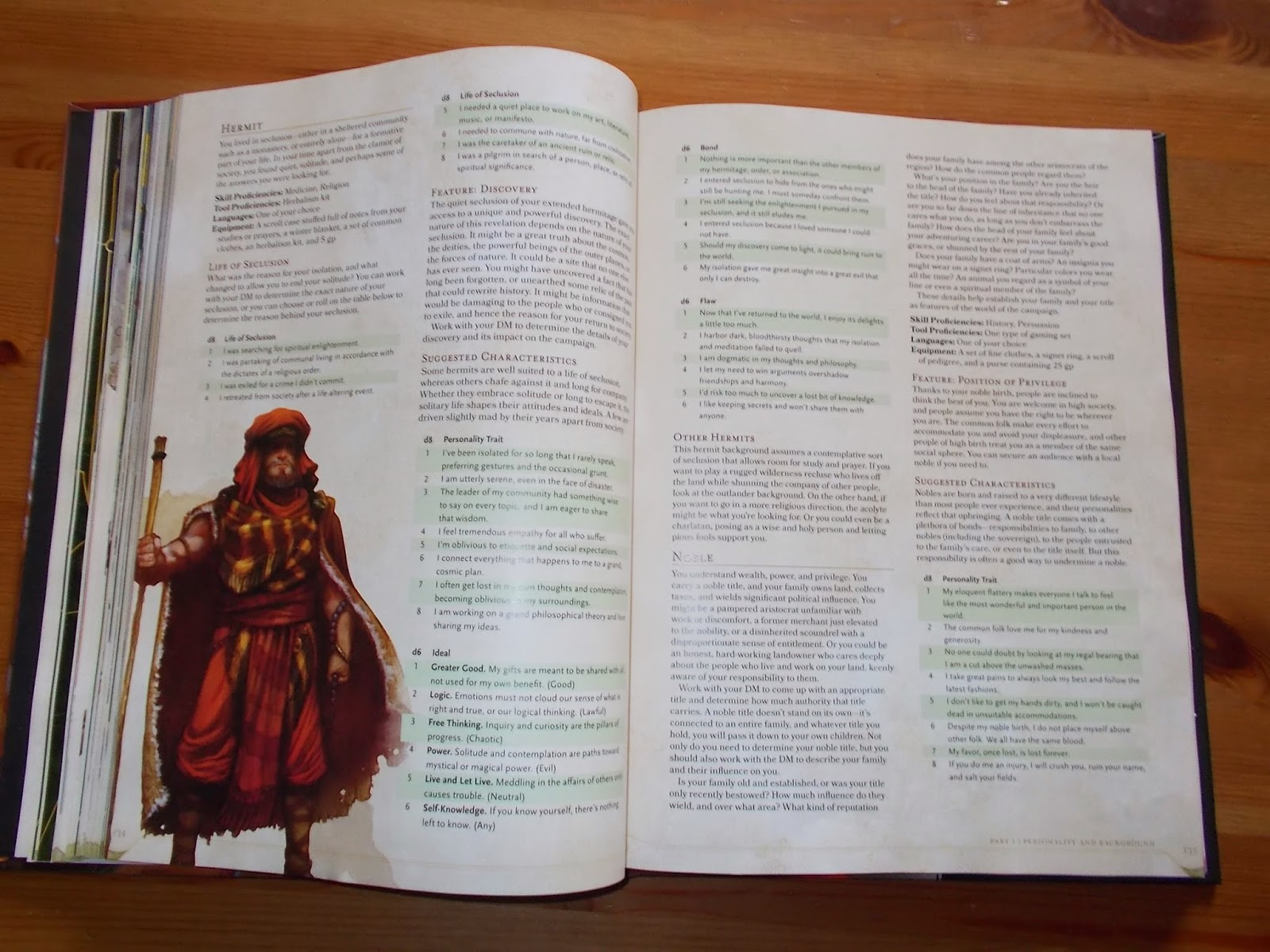 So, looking through the options as I was helping the newbie next to me, Dragonborn was an interesting idea, the whole noble “Monster” concept sits well with me at the best of times, so also went with the Paladin option and rather than choosing the Noble option, I chose Hermit, as of one who had gone from the world and meditated on what things needed to be rather than live a life in the world.  Again, all within the character generation process and easily findable with the old fighting fantasy trick of leaving your fingers in the pages. 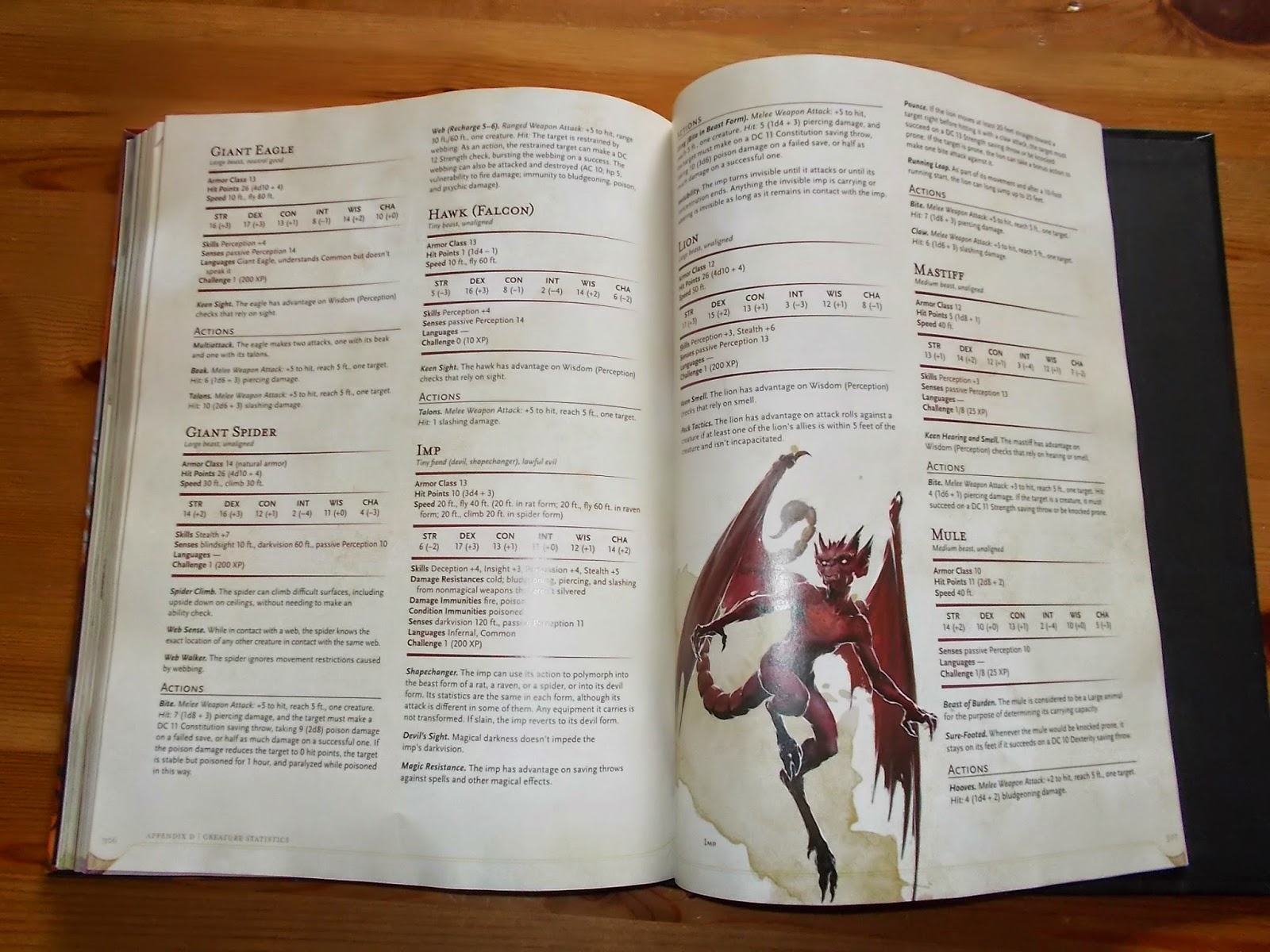 Easy to navigate through the book as well, the index is complete and the details of how to find things are clear, which makes the whole character creation thing very easy to do and doesn’t bog you down with unnecessary details that you just don’t need.  Previous editions have included things from the other books that distract from the process of character creation and while there’s a lot of stuff in here, it’s all player material, there’s nothing in here that will give you an insight into what the GM does or how they do it.

Some would say that’s a good thing, some a bad, from the point of view of an experienced player, I already have most of what I need in my head, from the point of view of the newbie to the side of me, he didn’t want to be distracted by what the GM did.  This was his first foray into the world of playing around the tabletop with other humans, as far as he was concerned, the GM would replaced the world of Warcraft server that fed him adventures on his computer and that was all he needed to know about the matter. 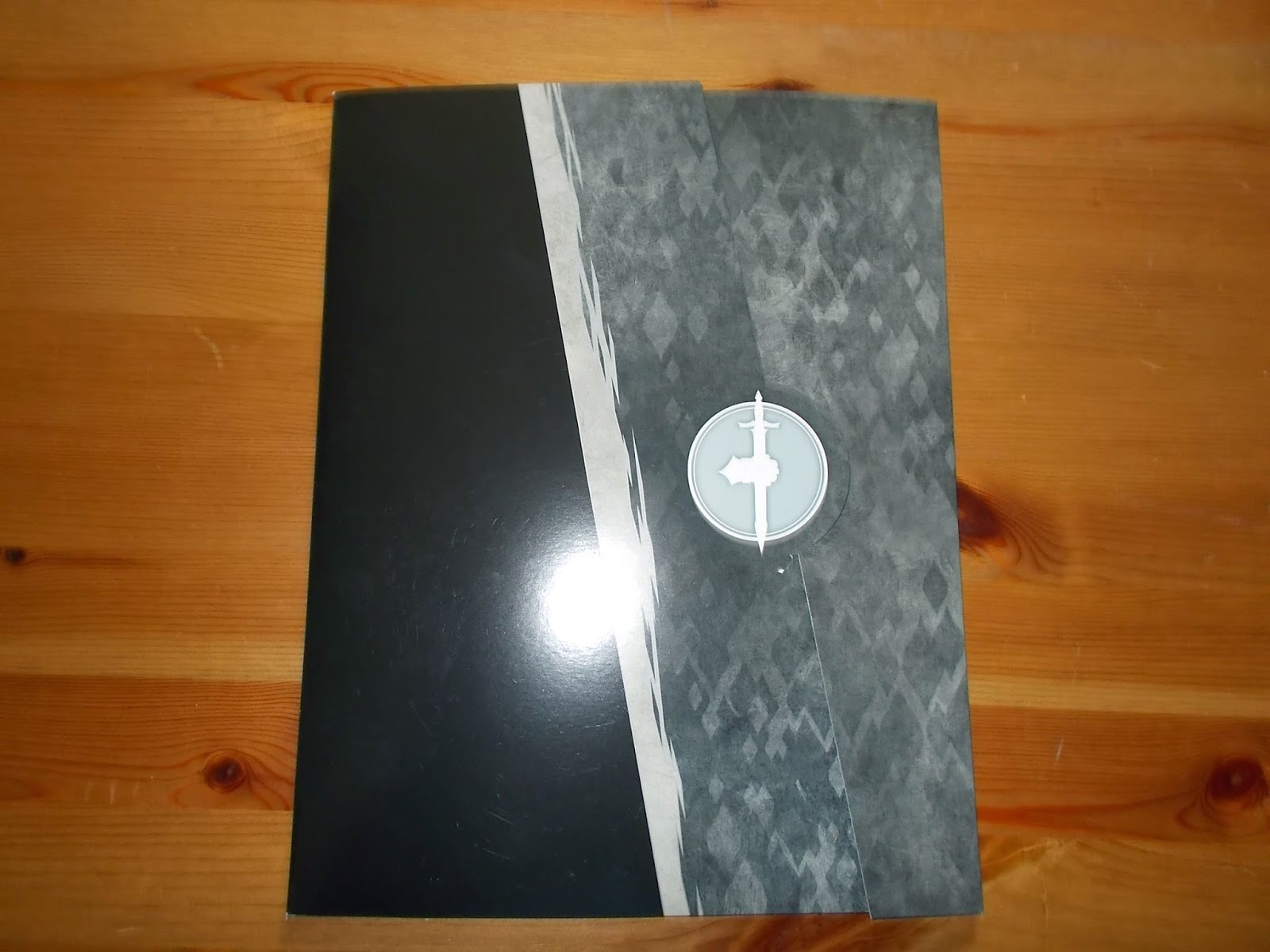 And this brings us to the League of Adventurers, for which D&D have been giving out a lot of promotional materials to help bring people into the world.  Not as much as the local club would have wanted, but if WotC gave out as many adventurers packs as there were adventurers, they’d be bankrupt and that right soon.  Besides, ask a gamer how much free stuff they want and they’ll respond with “All of it...” as all of us know.

That said, one of my good friends, Martin Tideswell, just got appointed to regional co-ordinator for Europe, so I’m sure that everything that can be handed out, will be... 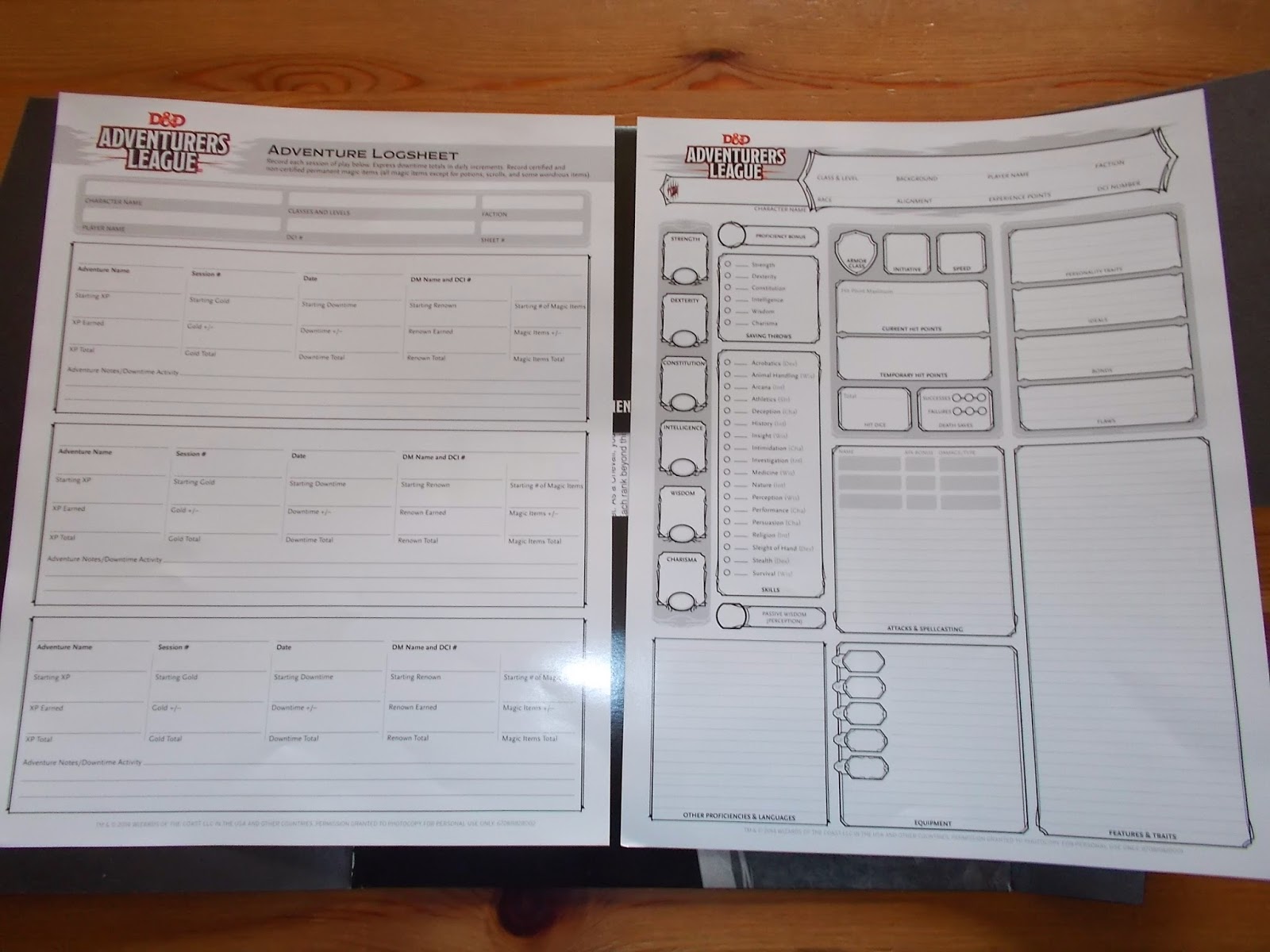 But back to the league, every person playing gets a pack that welcomes them to their particular faction, to be chosen from The Harpers (Wandering good guys protecting people from evil), the Order of the Gauntlet (best summed up by the line “SMASH EVIL”), The Emerald Enclave (mostly druids and rangers, dedicated to maintaining order and balance), The Lords Alliance (All for one and more for me, on top and like it to remain that way.), and the Zhentarim (All about themselves and what they can get for themselves).

No surprise with my Dragonborn Paladin that I chose the Order of the Gauntlet... 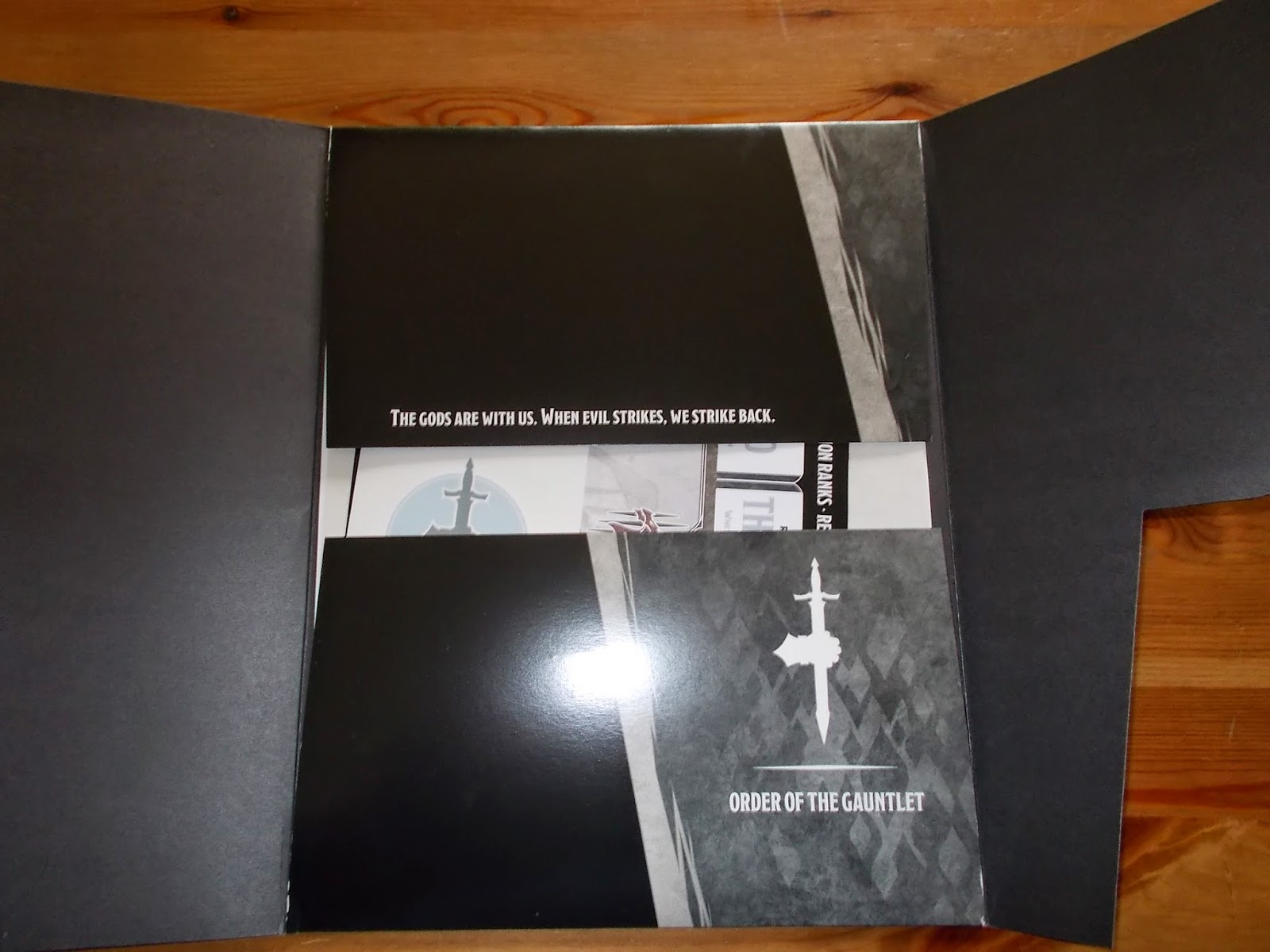 The pack is simple enough, you get a character sheet, an adventure log, a letter of introduction to the faction from its head, a membership note, a special one use item as a bonus from your faction, and a stand up card to take with you from game to game and put out there introducing your character to the rest of the world. 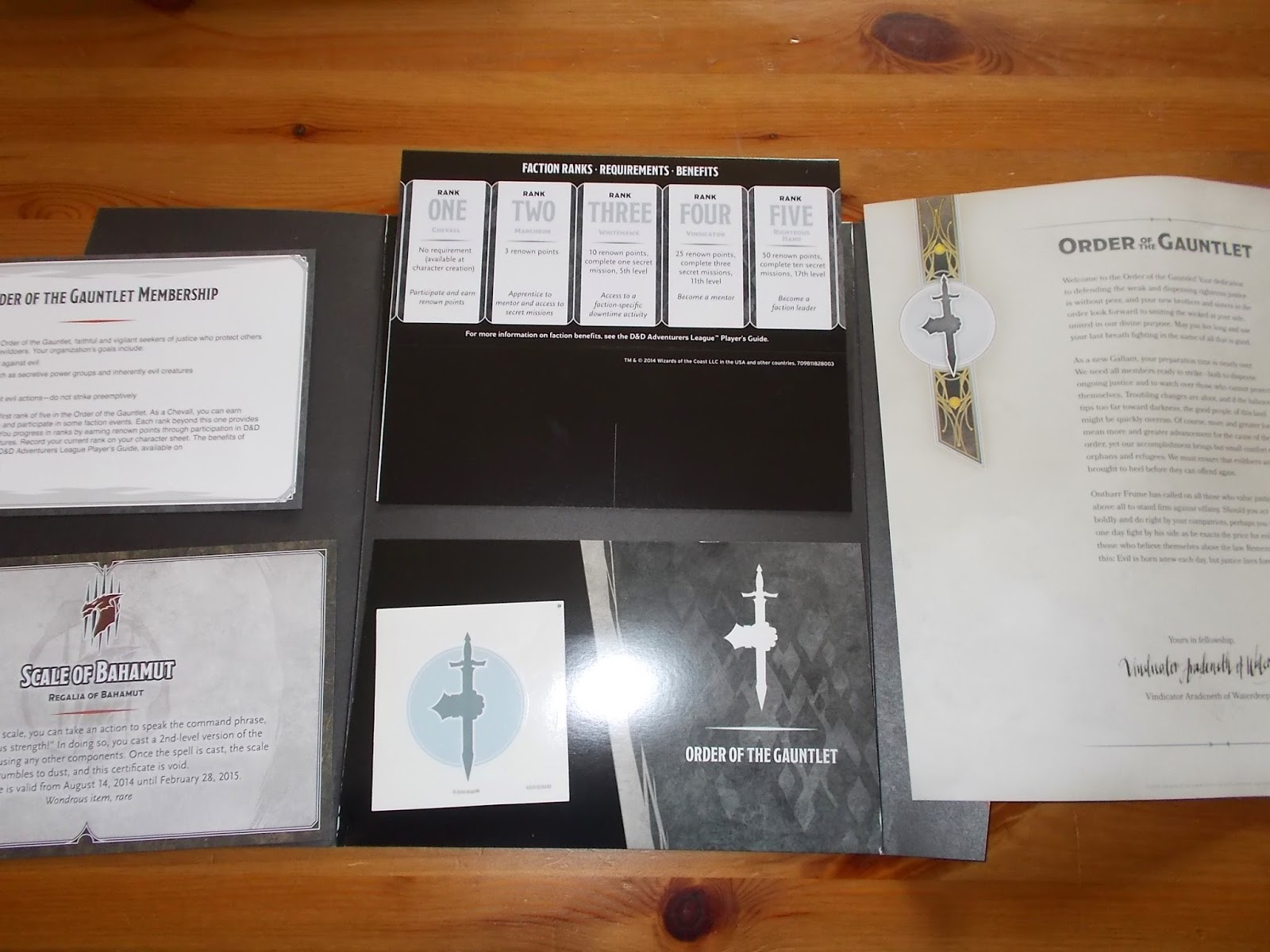 It’s a very good start, and if more of these packs can be given out (as I’m sure they are being right at this point at Gencon), then there should be a strong start to the adventurers league.  I’m playing in the first adventure next week, and there’ll be a report on how it went when I return.
Posted by John Dodd at 02:59