#27daysofgames Day 9 – Favourite premise or concept in a game: Machine of Death 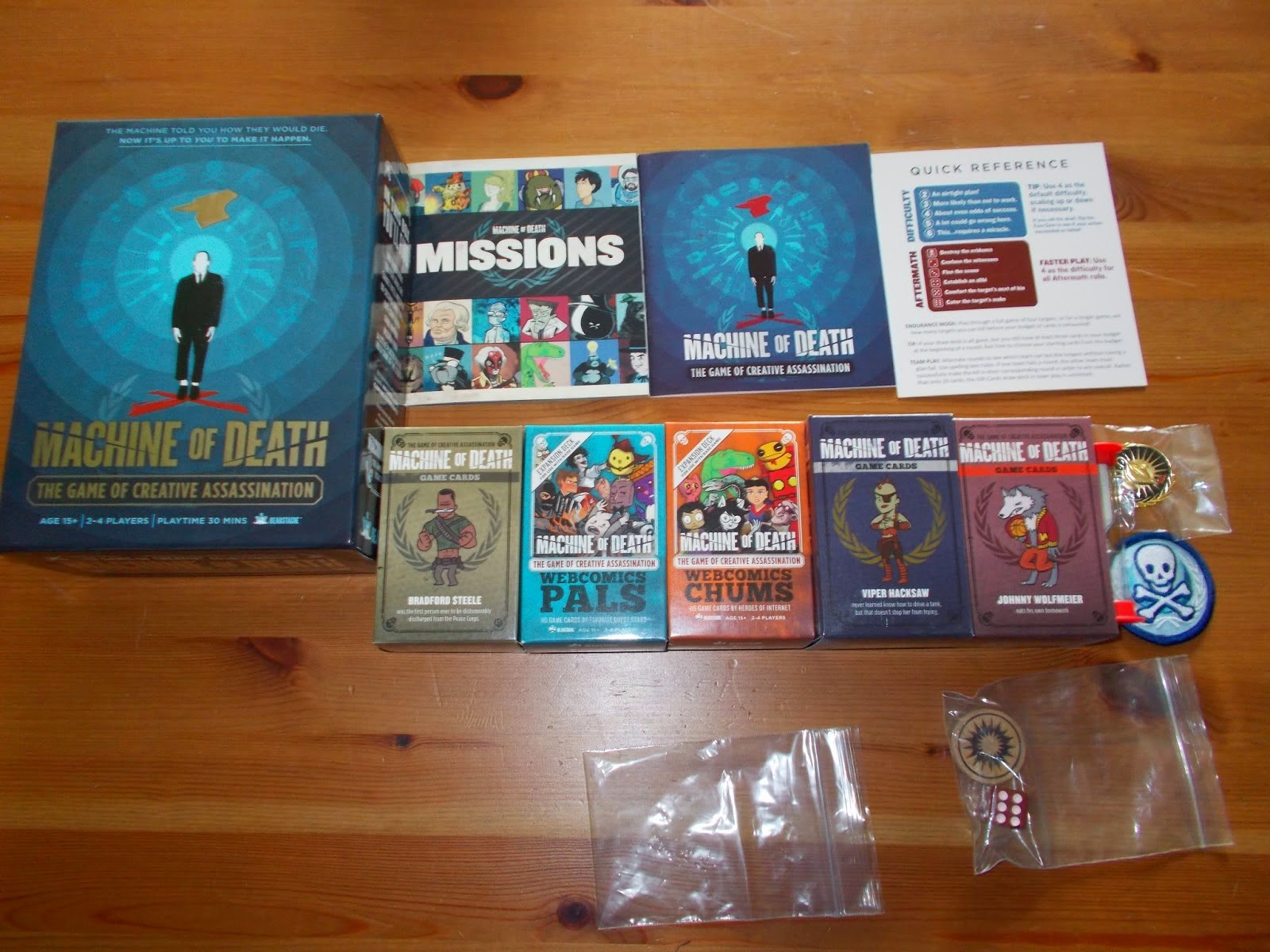 There are a number of interesting ideas in games today, and often the most interesting and long lived games are the ones about subjects that would seem dull or lacking in playability.  Farming and resource gathering, curing diseases and building railroads, in real life, all of them time consuming jobs that take years to do successfully, none of them subjects that would have been seen to be an interesting game years ago, and yet when you look at Settlers, Pandemic, and Ticket to Ride, you have to wonder if it’s the premise or the mechanics of the game that makes it good.

For me, it has to be a combination of the above, but the reason I pick a game up in the first place is because the premise has my attention.

And when it comes to premises that got my attention, it’s Machine of Death all the way... 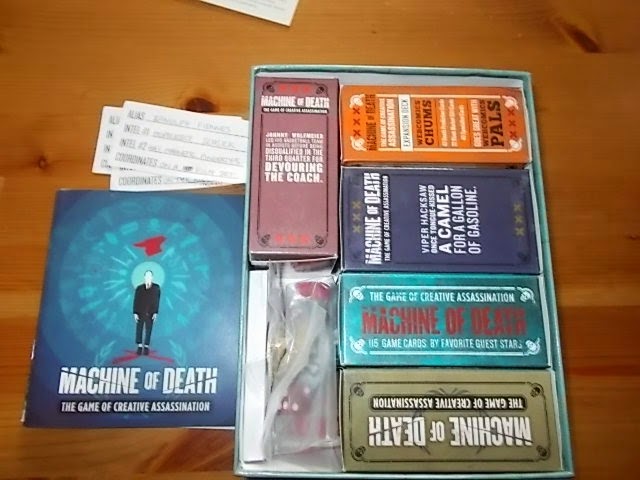 Machine of death as a premise indicates that there’s a machine out there that predicts how a person will die, not when or where, but how.  The difference is that it uses terminology that can be a misleading, the example of this is that one person gets told that it will be Old Age that kills them, and as they leave the machine centre, an old person asleep at the wheel of their bus goes over them and that’s it, they’re killed by old age...

This is a game in which the players take on the role of a group of Assassins trying to make sure that the Machine’s prediction comes true.  Players are given a target to kill, then the cause of death, and then the tools to cause the murder to happen and the complications in the case.  It’s then down to the players as a whole to come up with how all those things come together to solve the assassination.  What I like most about this is the almost completely freeform nature of the game, as seen in the cards here, when you draw Current as a cause, it could be that of a river, an electricity circuit, or something that’s up to date. 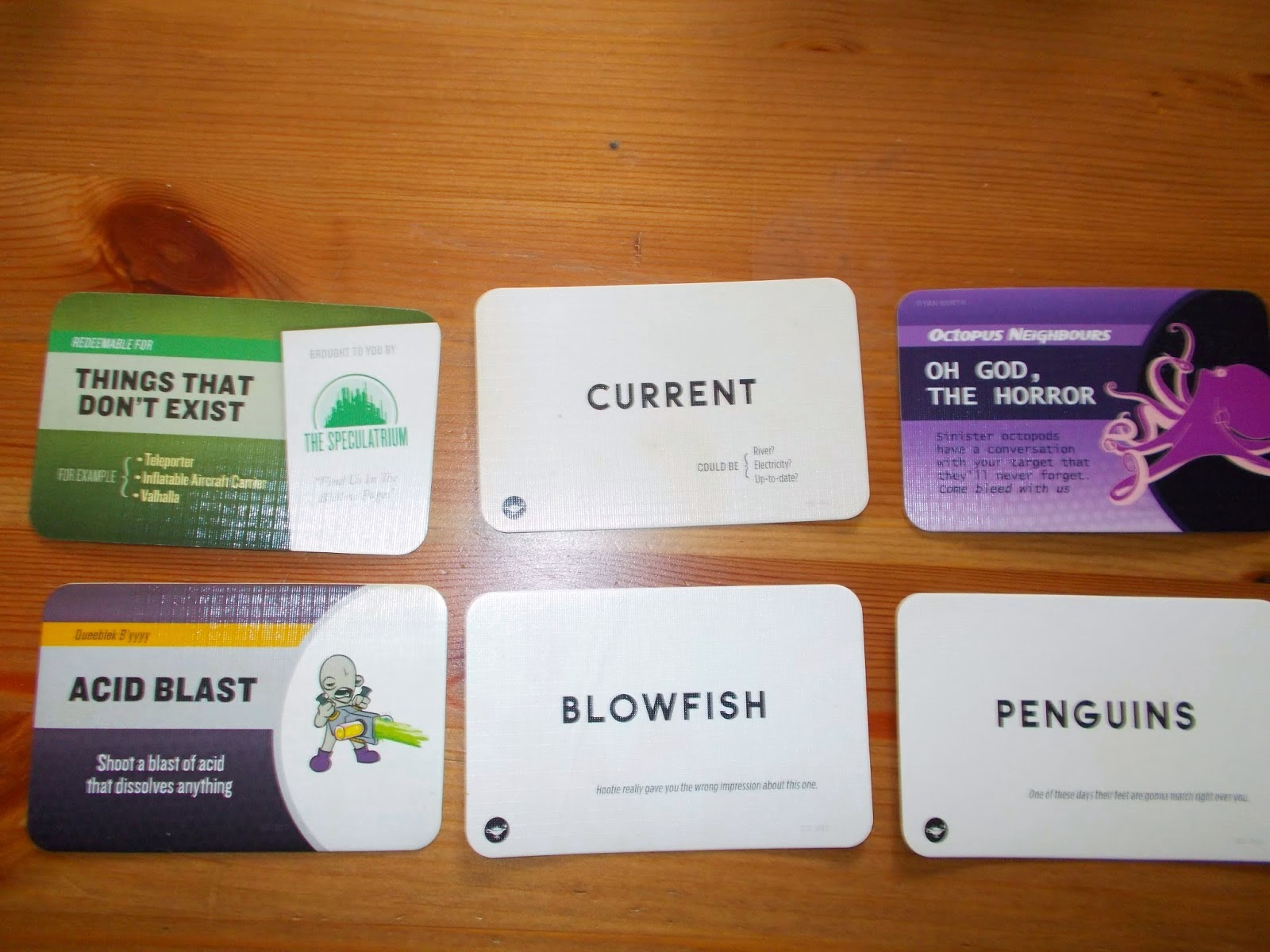 The key thing about the whole game is that you judge your rate of success on the game between yourselves, so it’s possible to say that all the plans you draw are very likely to work, and that makes the next stage infinitely easier to win when it comes to the endgame, but then what’s the point of the game if you always choose to make it easier, it’s like playing a two player game with only one player and then running around the room cheering when you win.

So when it comes to the endgame, you get a single minute on the egg timer to go through all the plans that you’ve figured out, and if you pass them all, the target is done, but if at any point you miss the roll, you have to make another plan in that same minute to come up with another way to finish the job.  If you do make all the rolls, you get a bonus in the form of equipment or circumstance that can be used on the next job.

When you’ve finished the series of four hits, you check the results, four dead and the team wins, even one survives and you lose.  As I said, it’s easy for the team to make the game very easy, but if you play it as it’s intended, it’s excellent.