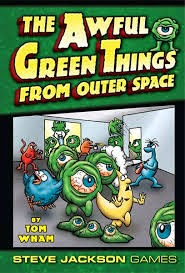 Some games have an innate humour to them, some are played for laughs, and some are unintentionally funny by virtue of what you find yourself doing while you’re playing them.  Awful Green things from Outer Space is one of the one’s that has both an innate humour and becomes funnier as you play it.

At least when I’m playing it anyway...

I was introduced to this game some years ago, when my brother got a copy of it and we thought it would make a good change to the normal games of 40k that we were playing most of the time.  A game that didn’t need us to spend a few hours building an army and making sure it was accurate was a welcome change. 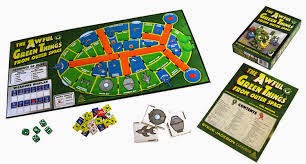 The premise is simple, Awful green things have turned up on the ship and are causing mayhem, it’s down to the crew members to subdue or kill them all, and to this end, they have a variety of weapons at their disposal.  The thing that makes this game interesting is that no one knows what the various weapons on the ship will do until they’re actually used.  There are a number of different weapons and an equal number of effects that they can do, ranging from killing the green things outright to causing them to split, to causing them to get bigger, and as you use each weapon for the first time, you draw out an effect from a closed bag and apply it to the weapon.

Given that some weapons affect whole areas of the ship and everything in them, this can be a big risk depending on what result you pull out.  A kill result will be a brilliant thing for an area effect weapon, but if you draw a split or grow effect on the weapon, the results could be disastrous.  Either way though, the game was designed with this in mind, and so most weapons get tested on isolated green things where possible (after all, drawing a beneficial effect on a room full of them would be bad), and that’s where the fun comes in, the crew are trying to get to all the green things before they grow to the point where they can’t be stopped, and the green things, well, the green things are just trying to eat all the crew, and depending on the weapons effects that are drawn, that becomes easier the more the game goes on.

I love Awful Green things, I think it’s one of the best examples of having to think on your toes (for the crew anyway) that’s ever been produced, and I’ve always enjoyed both the imagery used in the game (serious images just wouldn’t have worked with this) and the speed of the gameplay, tactics vary from game to game and it remains fresh even after a number of years playing.

The reason why this is the funniest game I’ve ever played is because of the reactions of the players when you find out what a new weapon will do and the entire game dynamic can change in a heartbeat, changing what was a sure rout into a crushing fail without a moments pause.  My brother and I tend to mock each other somewhat (I’m being kind here) when we play games, particularly when something unexpected comes up and we have to replan the strategy accordingly.  Most games might have one or two times in a game that cause us to replan, this game does it practically every turn, and that is a good thing.