The Beginners Choice, D&D Next or Pathfinder? 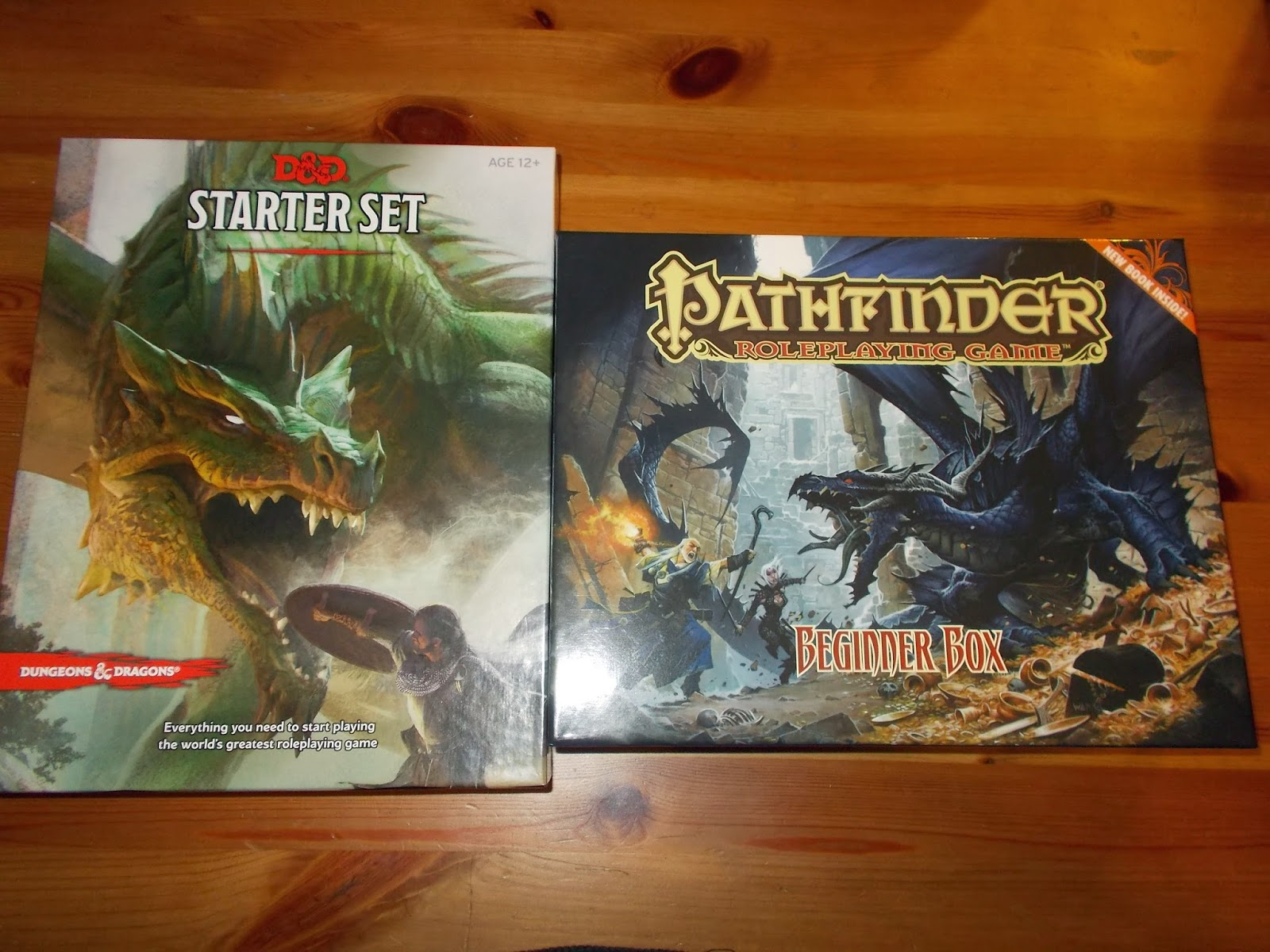 Spent the last few days collecting the feedback from a few absolute beginners regarding the beginner sets of D&D 5th and Pathfinder, (Swift disclaimer, bribes may have been levied in the form of various sweets in return for their attention to the subject matter).  I also got the opinion of a few people who don’t actually play fantasy games, as I figured that asking someone who already has a take on the games would probably have a level of Bias involved that I’m trying to avoid.

Starting with the general layout of the box and the artwork within, Pathfinder scored heavily for being full colour all the way through, and not just the colours of the artwork, but the backgrounds and the way that the images were put together.

Everyone noticed that the front cover image of the D&D box set was used repeatedly...
Whereas the pathfinder art was only repeated on the stand characters and only then to identify that the stand was that particular creature or character.  The other thing noted was that the D&D box set felt cheaper, more due to the lack of things within the box (and the filler space), whereas the pathfinder box was quite literally crammed to the top with usable accessories. 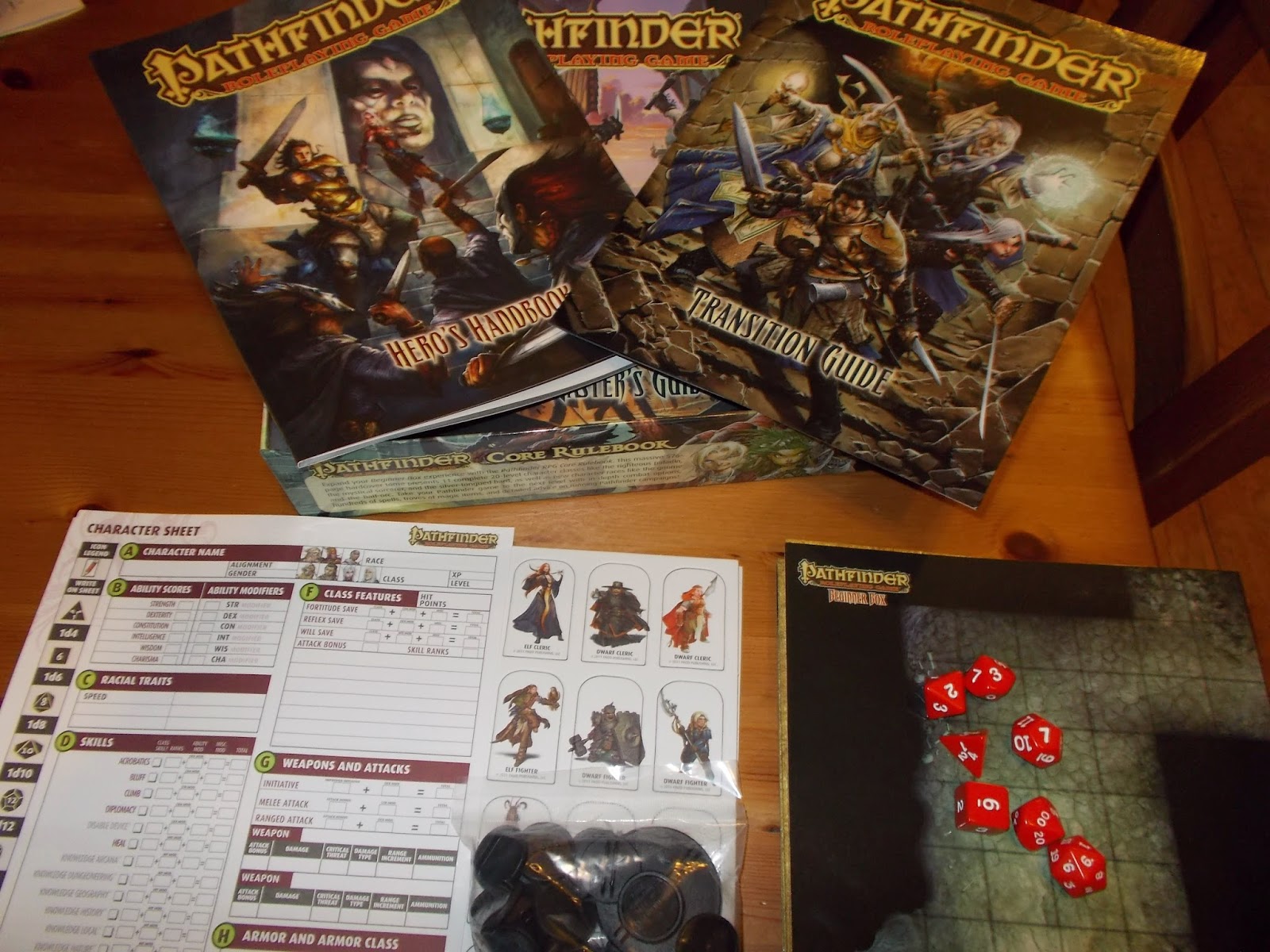 The absence of the percentile die was noted by a few of the beginners, with some of them looking at it from the point of view that a single die removed from a million units would probably save some money, but at the same time, it also gave the impression that the game had been looking to cut corners, particularly when you came to the demonstration characters and the addition of various leaflets, assistance, and other pamphlets in the Pathfinder box.

So we moved on to rules, and with both of the systems sharing at least some common ground from the previous editions, it was more a matter of how things had evolved since the time of Third Edition.  Spell usage and casting requirements on both sides were viewed as a little confusing, with one particularly enterprising rogue figuring that if you steal the mages box of components, you effectively reduce them to casting things that aren’t that powerful, which isn’t strictly true, but it means that they were at least giving it some thought.

That the Pathfinder had character sheets clearly laid out with the various actions that could be done was both noticed and appreciated, with the D&D sheets seeming somewhat bare by comparison.  All agreed that characters should be rolled up to see if the difference was still apparent when it wasn’t all singing all dancing, and so they were... 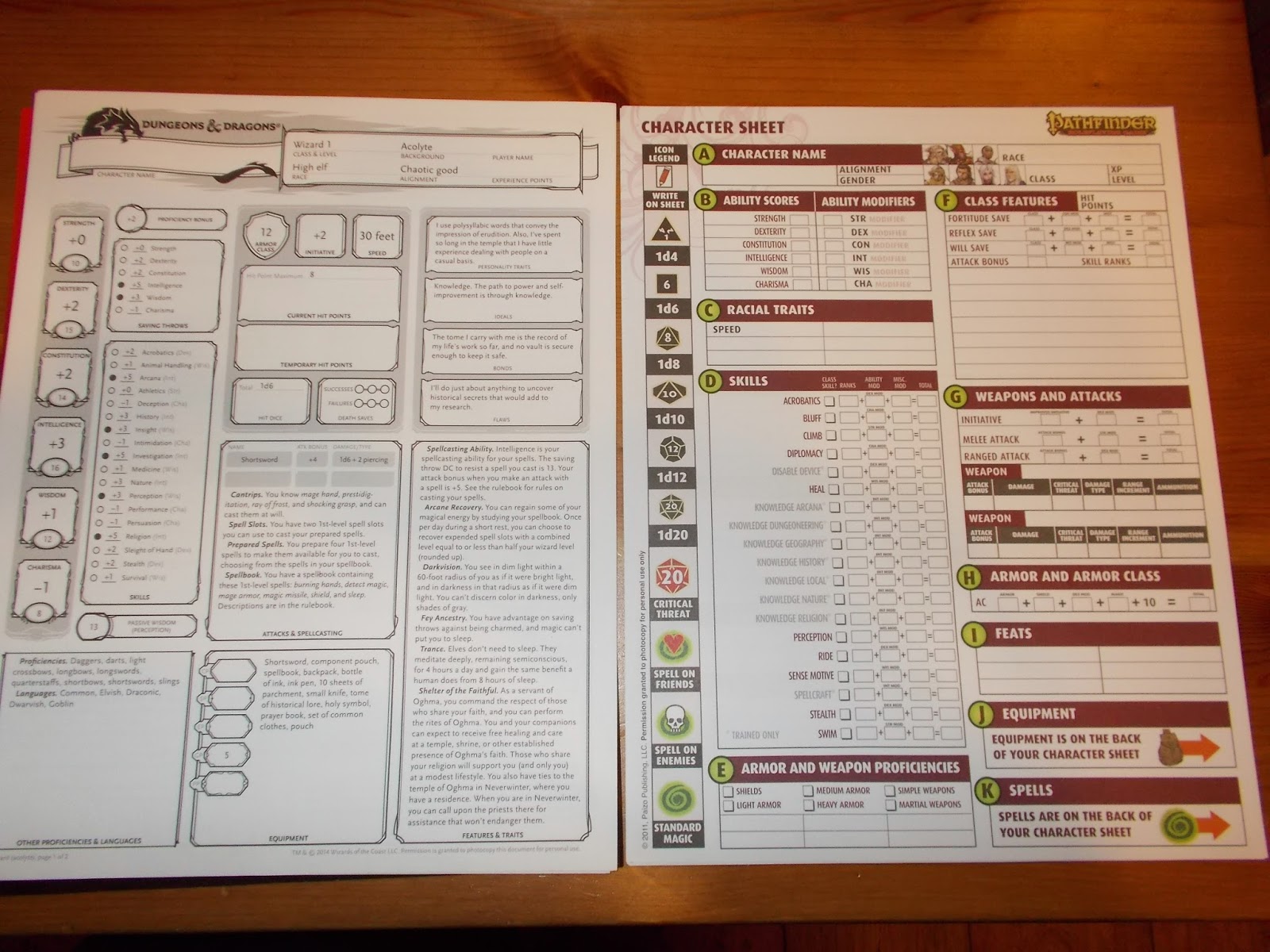 There was more back and forth glancing with the Pathfinder than the D&D, but with the way the blank characters were laid out, back and forth element took less time than the few bits of checking that the D&D required.  While I thought that the addition of the character generation rules for free as a download was a good move on the part of D&D, I was almost universally disagreed with by the beginners, all of which were much happier to have a book in their hands to flip through and considered the lack of said rules to look through in the box to be a dreadful larceny.

I shall not repeat the exact commentary given, but it was spirited...

While they did do the character generation in the end with a printed out version of the rules, they did say that they would have found it far more tedious to have to do it by screen.

Which brings us to the adventures given to run through and both adventures offered getting a run through the first scenario only, rather than try and run through the campaign (and therefore delaying this review another month...), it was agreed that the board and the stands made it easier to visualise things, but it also added an unwanted dimension of turning any combat situation into a skirmish wargame which removed some of them from the feeling that they were playing something in their heads.  Somewhat counterbalanced when the board was removed while talking was going on.  Some liked, some didn’t, but the fact that the option to use the board with the starter set was appreciated.  With the D&D maps on the A4 size paper, the book had to be passed around to get the same impression as in the middle of the table, it wasn’t large enough for everyone to look at.

Adventure done, the Advantage/Disadvantage mechanism was talked about quite a bit, and while the Pathfinder rules were better laid out and clearer for the most part, there was little variance in the actions the characters could take, and most players didn’t feel confident attempting something not on the sheets.

That brought into play the GM’s sections of each box, a lot more ways around using things and tricks for new GM’s to try to get things working in the Pathfinder box, whereas the D&D box contained a few pages and skimmed over most of it.  It was generally agreed that while it would take longer to play through the D&D mini campaign, you’d have nothing to do at the end of it, whereas the Pathfinder instructions gave you ideas on what to do when you were done with the material that you were given.

That brought us on to the Monster Manual and creatures listed within...

From an experienced GM point of view, I’m happy to work with what I have to make something different, I know how to vary the hit points or attack bonuses to make things more or less difficult, and I’ve been doing that for years, so it’s second nature to me.

From the beginners point of view, it did not go unnoticed that the only things listed as monsters in the D&D box were those that were in the provided adventure, many of them without artwork to accompany them, only a written description.  Very much the feel of “If you want more, there’s a monster manual coming out soon”. 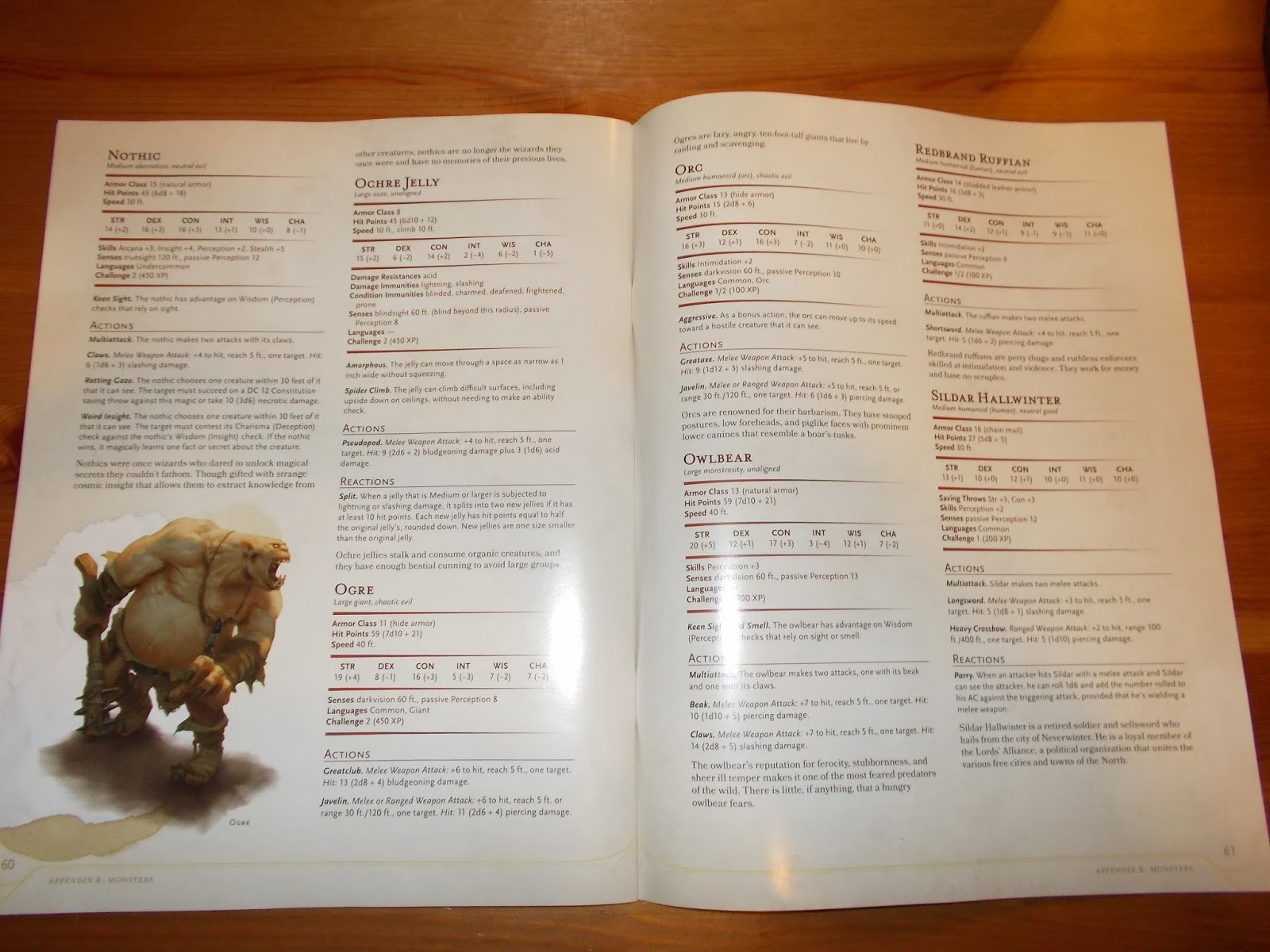 On the other hand, the pathfinder had all the creatures in the scenario and more, all in full colour with their own images. 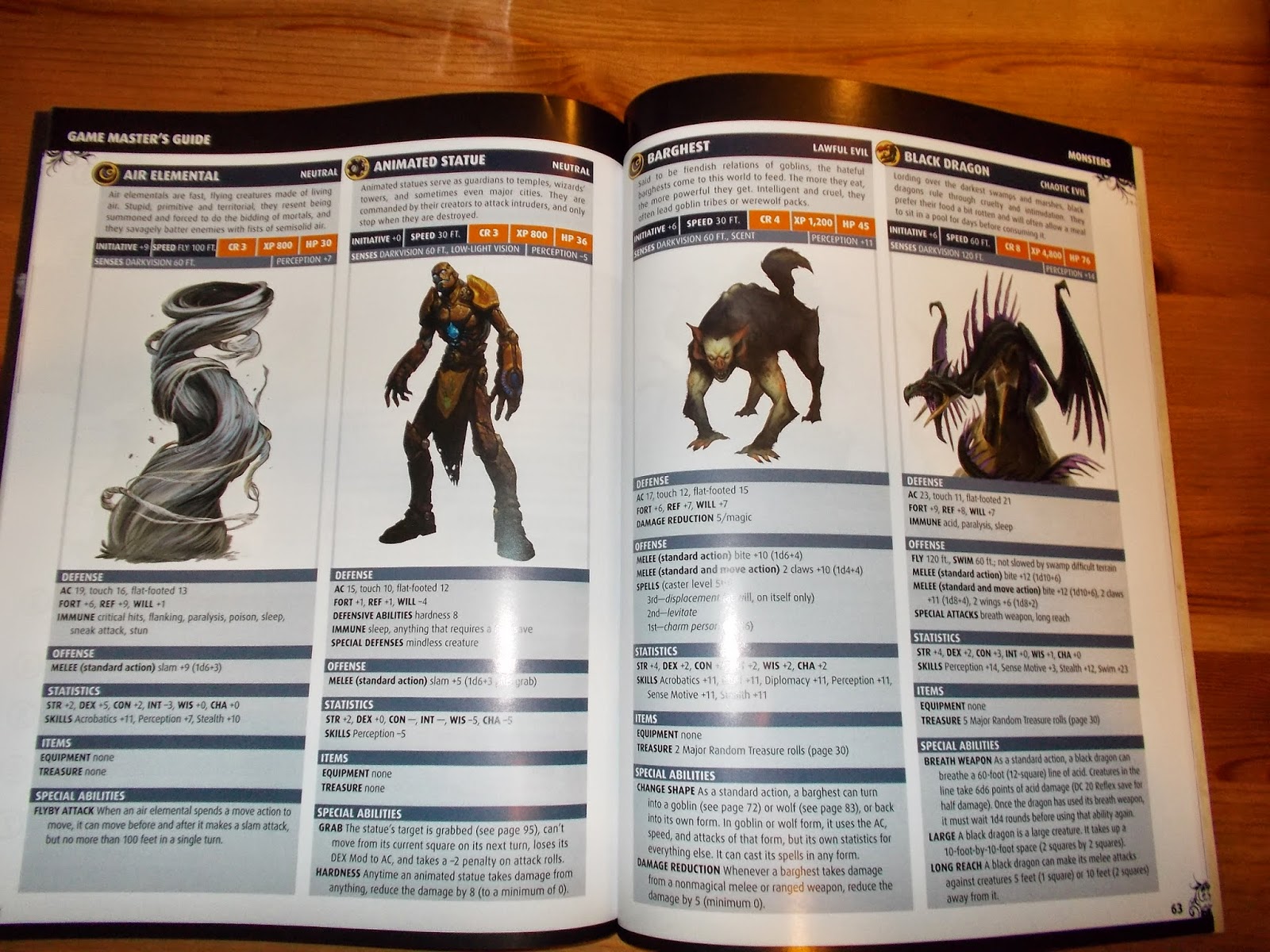 More than that though, when the creatures were encountered in the D&D book, there was the comment of “Go look it up”, whereas the Pathfinder stats were listed next to the creature in the scenario.  More monsters to play with in Pathfinder swung that particular vote decisively.

Small touches to be sure, but all the difference that needs to be made when it comes to people just starting out, both players and GM’s.

This in particular was the thing that made the difference to all of the beginners, the D&D set expected that if you needed a rule, you went and looked it up, the Pathfinder saved you the time and put the rule there for you to save you that half minute of looking.  Everything was geared towards keeping you in the game and not in the rulebooks, and even though I hadn’t picked up on that (knowing most of the rules anyway...), it is a good way to start people playing, keep them as much in the game as possible, which isn’t possible if you have to break game every few minutes to check on something.

In the end, the beginners said that even though the pathfinder is more expensive by a small amount, the additional expense is more than worth it.  While they would play both games given the choice, they found the Pathfinder more interesting in presentation and ease of use, they liked the options that it gave them and that you could play for a long time with just the basic set without having to buy anything else.

So in the Game of Games, D&D may indeed be Tywin to Pathfinders Tyrion, and both sides will have those that prefer them for different reasons, but in this test, Tyrion has certainly caught Tywin with his pants down...