D&D and Pathfinder, on the question of beginner sets being misleading...

Recently I put out a post regarding two different beginners sets, Pathfinder and D&D, and to say I got a little feedback from the post is like saying the Titanic took on a little water...

Overwhelmingly though, the D&D faithful put forwards two views on the matter.

1    1) They too were disappointed by the starter set
2) Quite a few (not all by any means, but enough to make me wonder) believed that Pathfinder were selling a slightly more expensive product with a lot more production value than their normal offerings, in an attempt to get more people into their game and thus cheat D&D of their rightful following.

So, considering that this might indeed by the case and that the Pathfinder box set may indeed be “Gamer Crack” to get people in before giving them something inferior, I took a look at a few different pathfinder modules, campaign settings, and general bits.  I also put them forwards for the beginners to take a look at, because at the end of the day, while I may like them or be willing to read through a million words of text to get to the shiny at the end of the rainbow, a lot of beginners really aren’t... 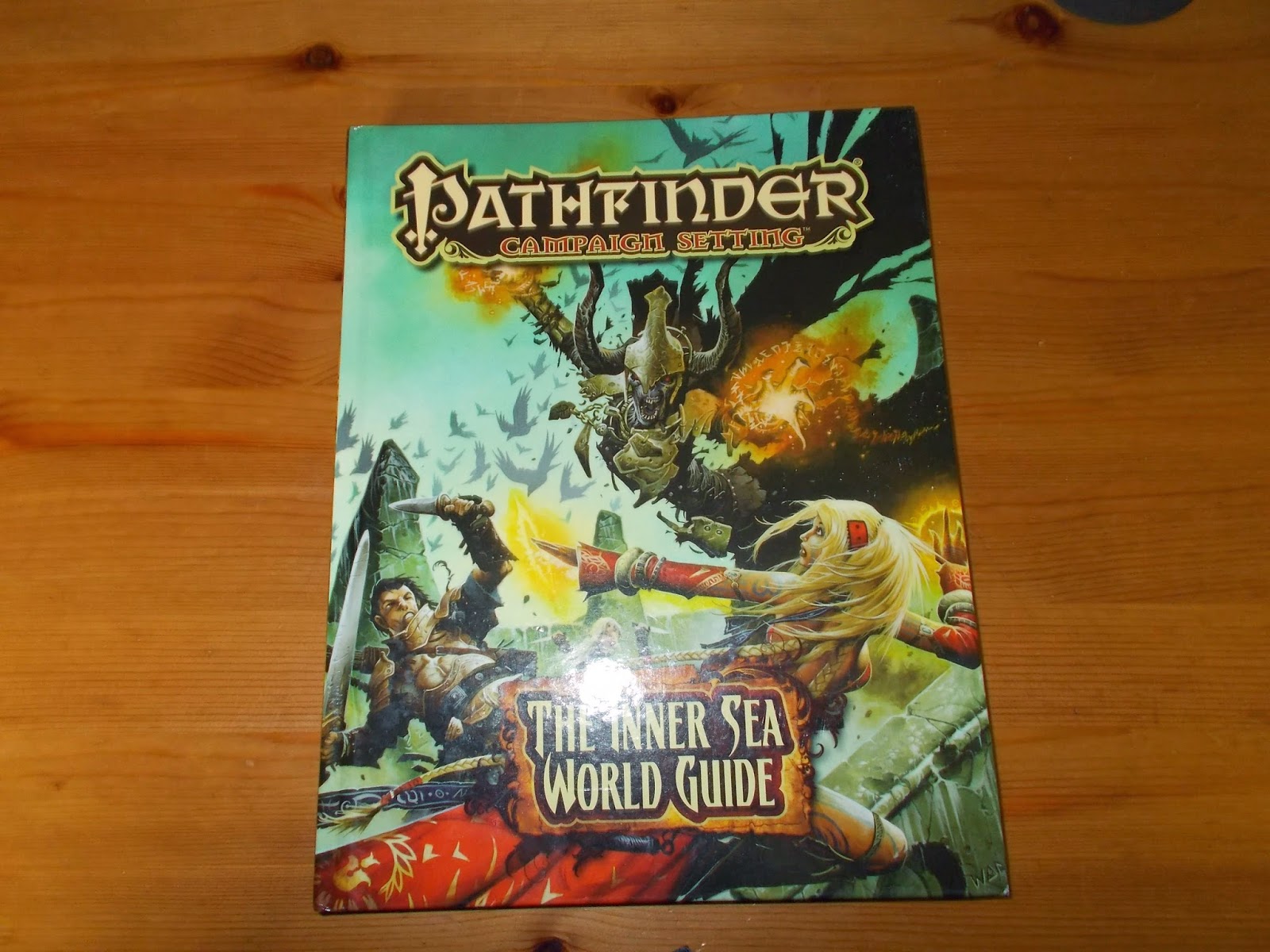 So, from the top, Production values are excellent, good hardcover with excellent binding, full colour throughout with images on almost every page, I found a few pages that didn’t have artwork, but the key point here is that I had to go looking to find pages without artwork, so from the point of view that this is one of the core books that beginners will pick up, the level of art provided and the production values therein appear to be a constant.

The book is divided into seven different sections, each of which details a particular part of the world.  Part One is the races of the world, each with a sample illustration of a member of that race, sample names, details of cultures and traditions, and enough to get a grasp without being swamped by details. 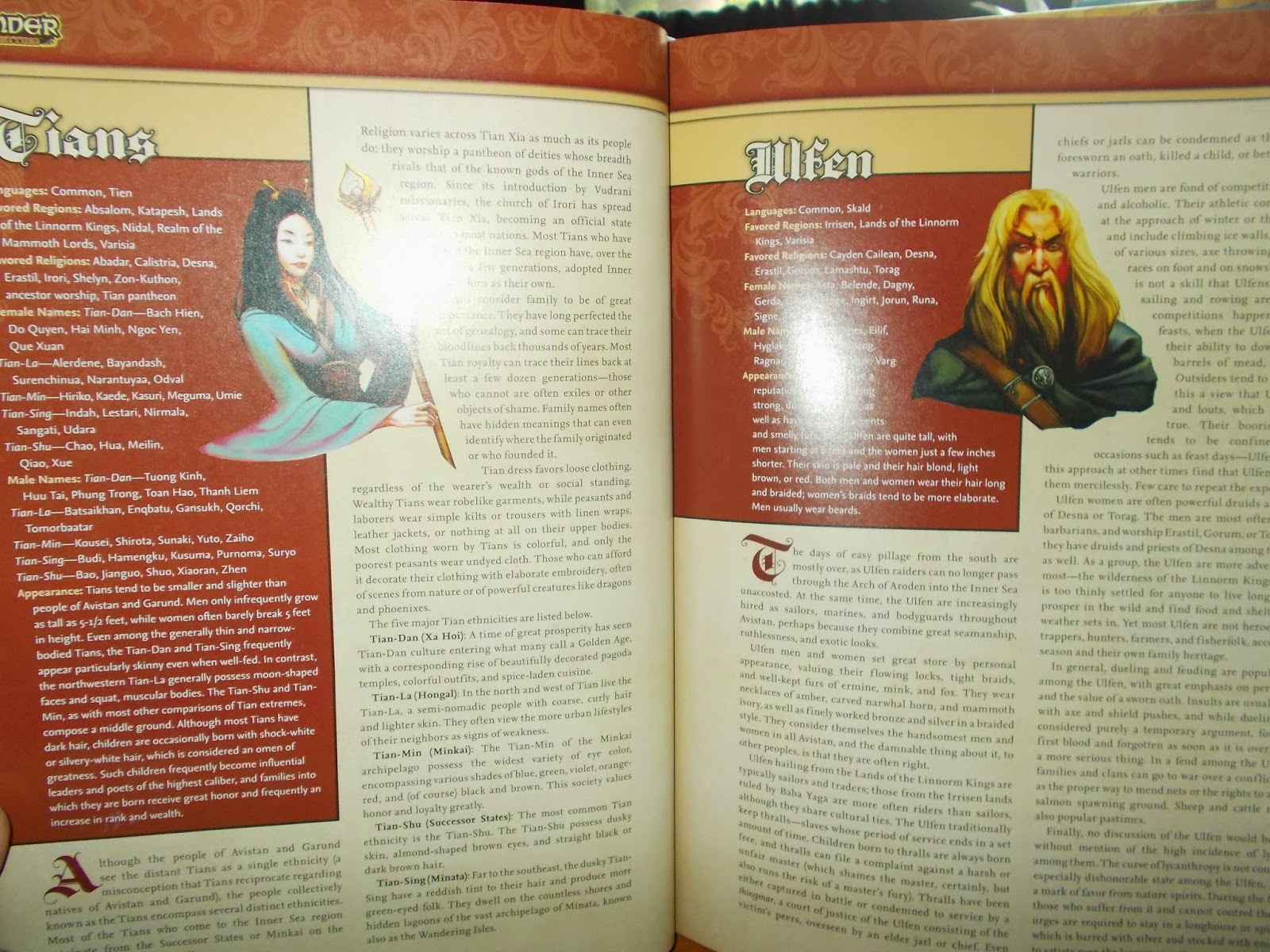 Part Two is the descriptions of the Inner Sea regions themselves, from Absalom to The Worldwound, again, for the most part a single illustration detailing something of what you might find in the area, then details on what goes on there, the races that live there, religions that are practised. It’s not a massive amount of detail, but it’s enough to give you an idea of what you want to do and where you want to go. 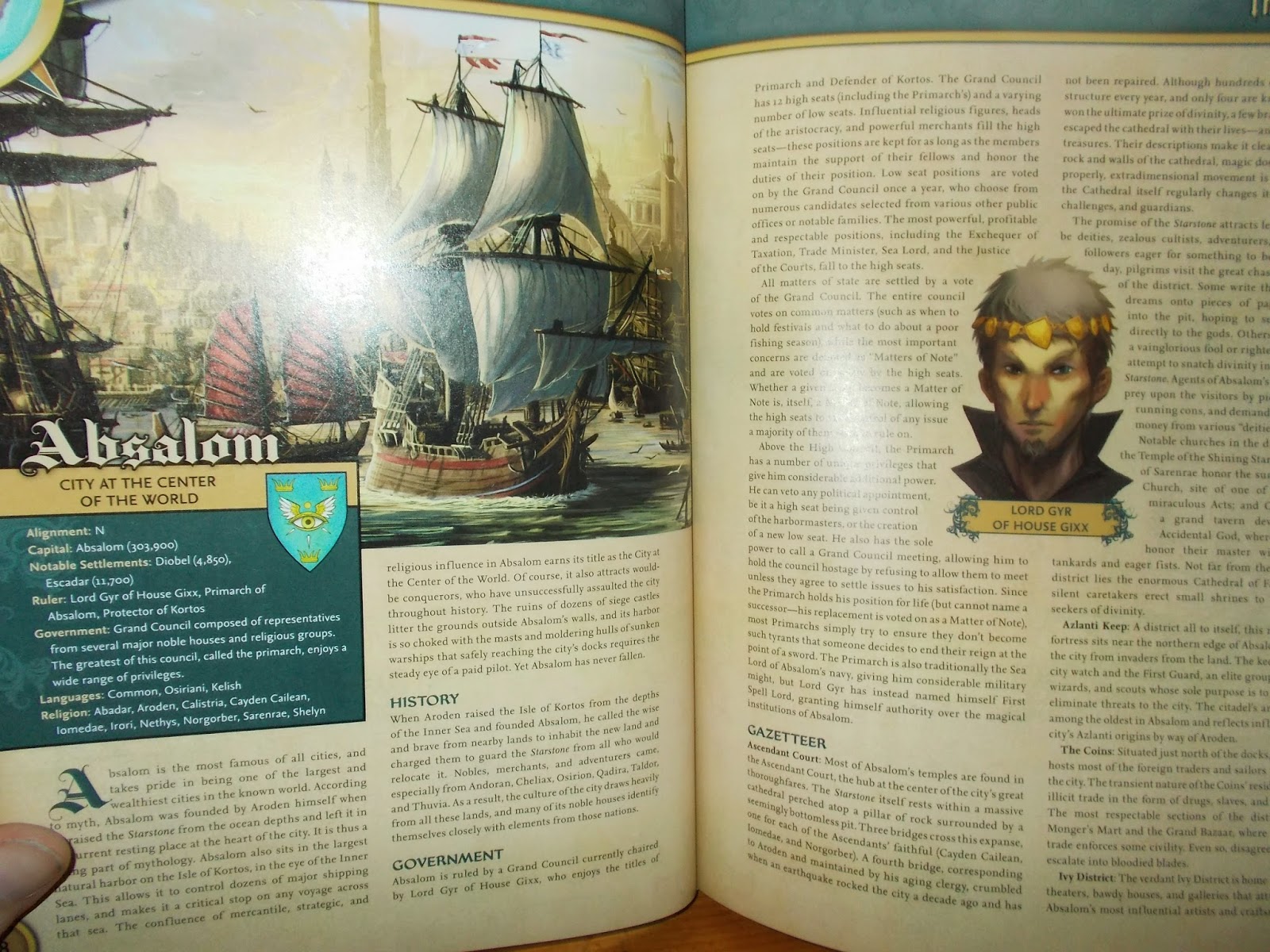 Part Three deals with Religion, Deities, Gods, Philosophies and the like.  Given that the world is one in which various gods are seen to grant powers and abilities, this section gives you enough to get a concept of the gods, but not enough that they seem in any way familiar. 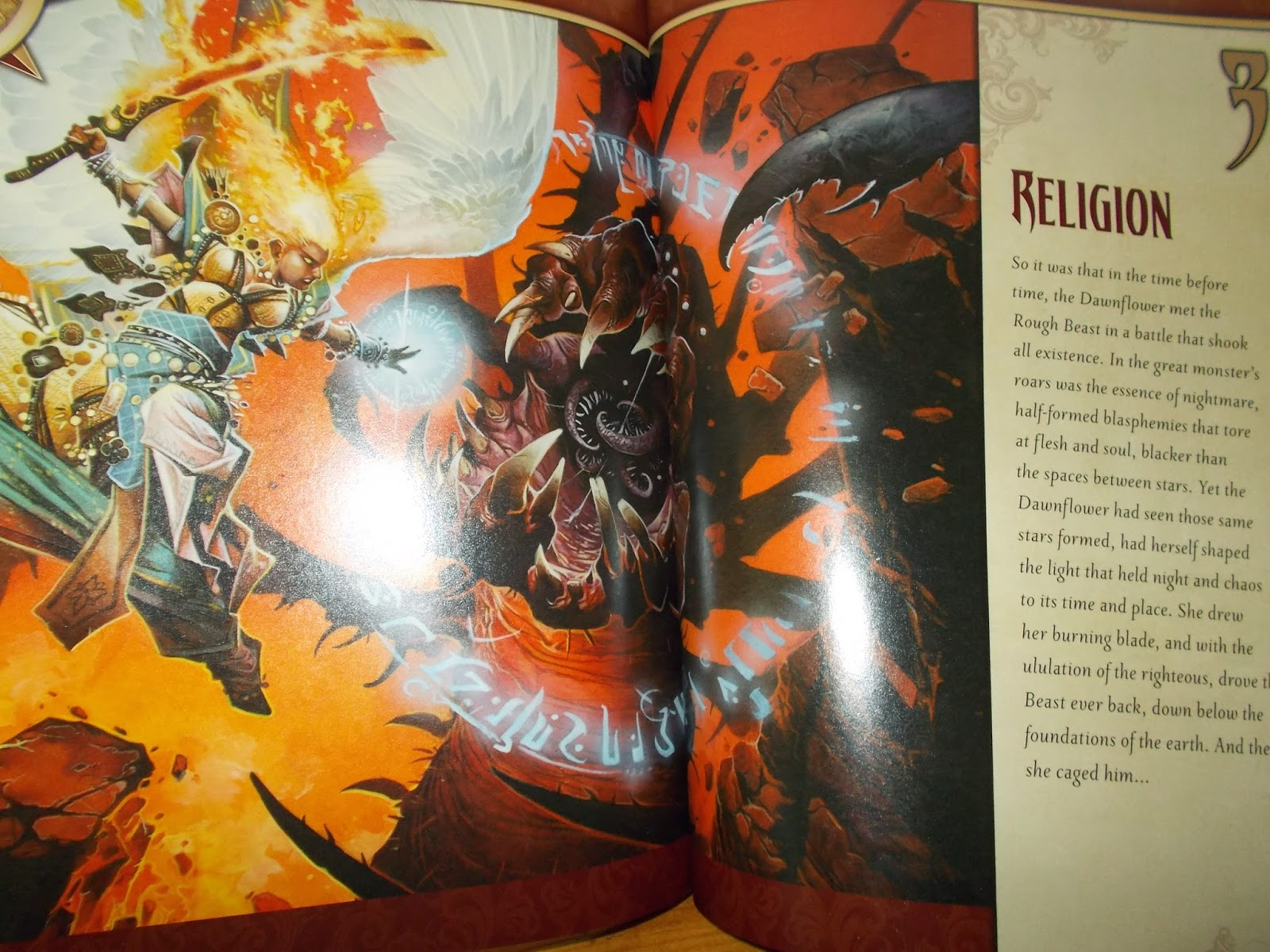 Part Four is the section on daily life, and interestingly enough, this is the shortest section in the book.  It touches briefly on currency, day and month cycles, travel and living expenses, but covers each only in small detail, presumably because most characters will be out adventuring for the most part, but still... 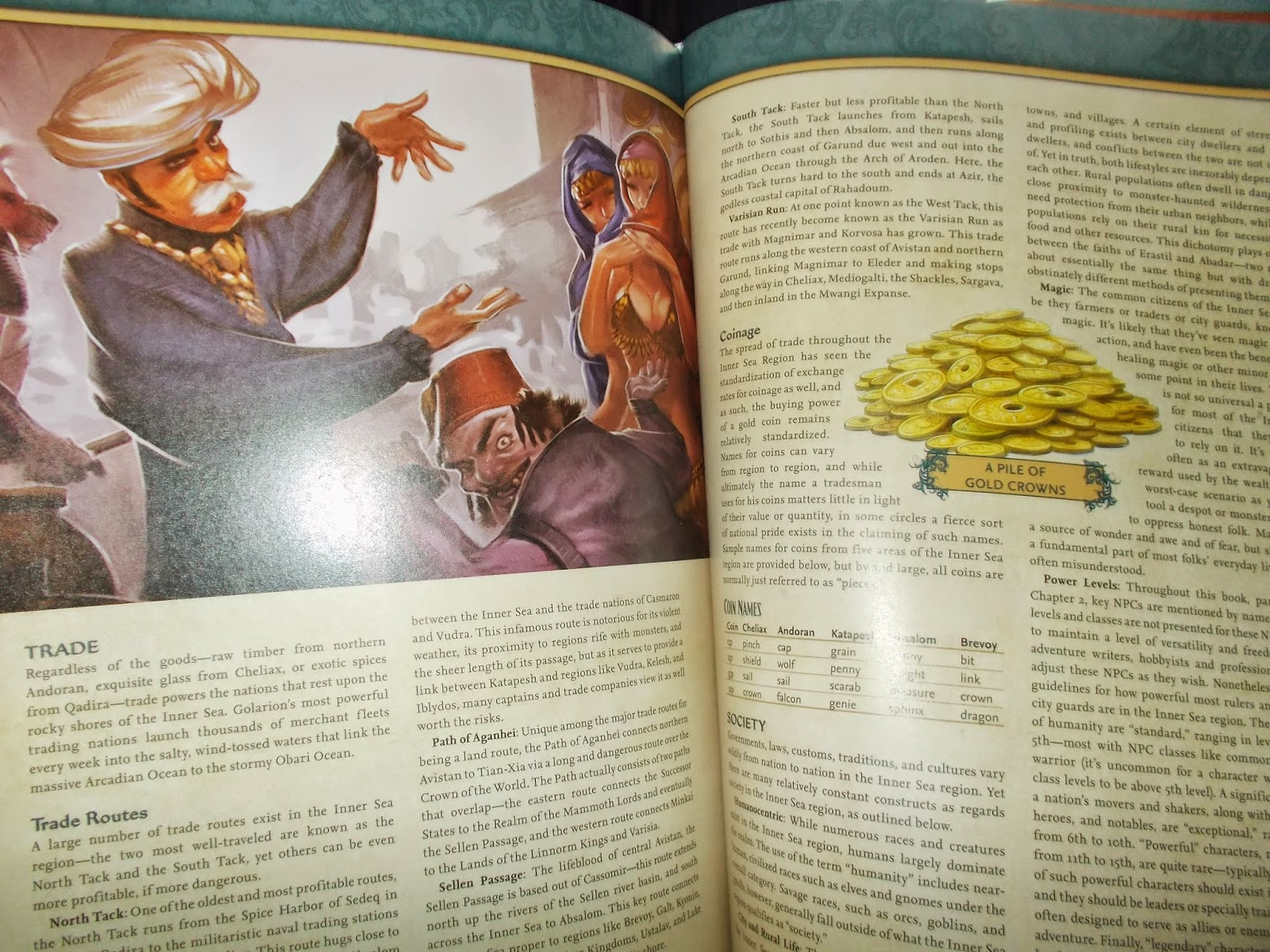 Part Five details various factions that exist in the world, from the Aspis Consortium to the Pathfinders themselves, together with what each faction does, what they are good with, their allies and enemies, and why you might want to join (or avoid) each faction.  There are ten minor factions and five Major factions presented, with the full detail going to the Majors, each of which has worldwide influence in the setting. 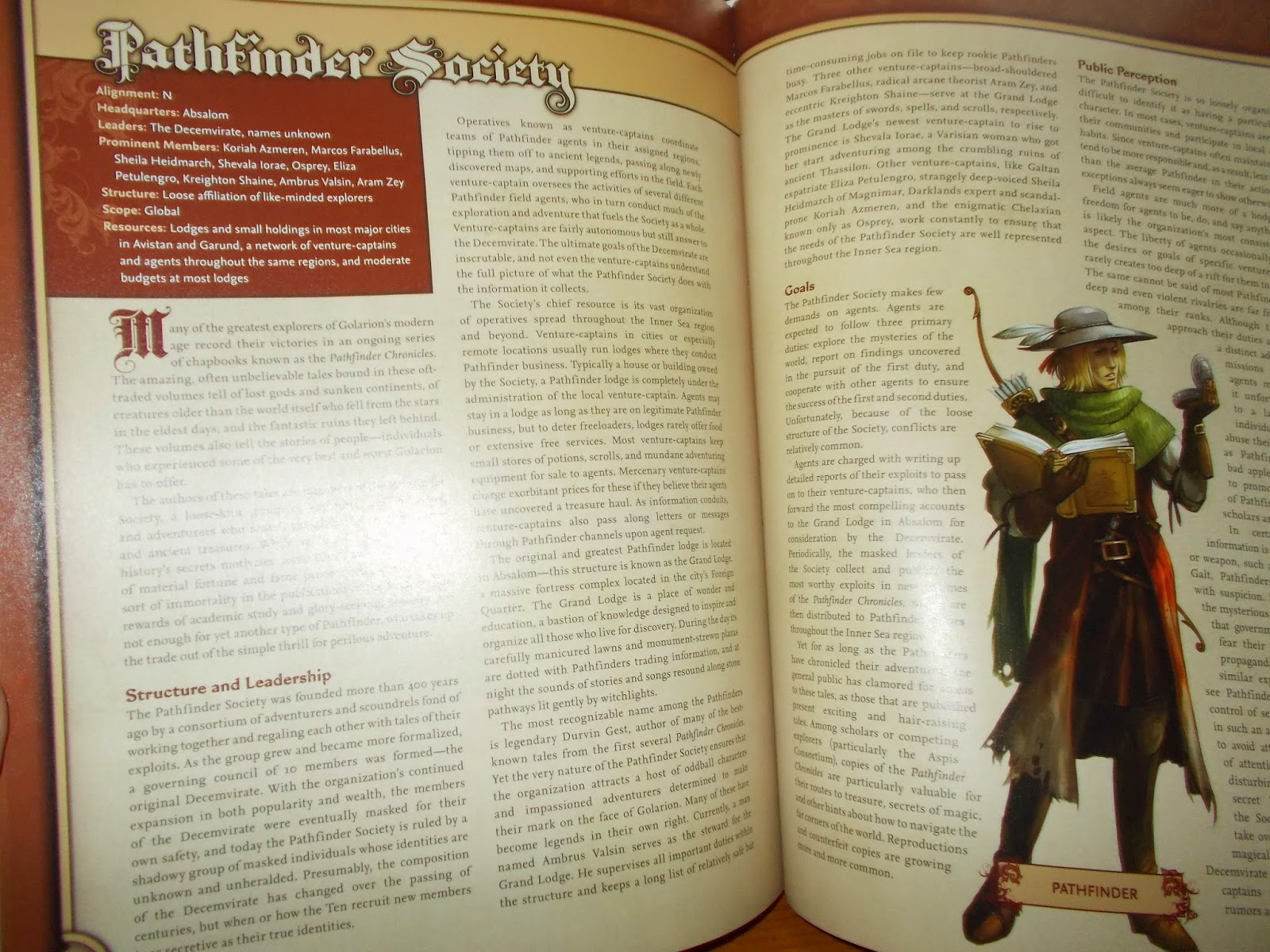 Part Six covers Adventuring, and is more the details of what the characters might need and what they might come across in day to day travels across the realms.  It’s a short section, second only to the Life Section, and the information is densely packed in for ease of reference. 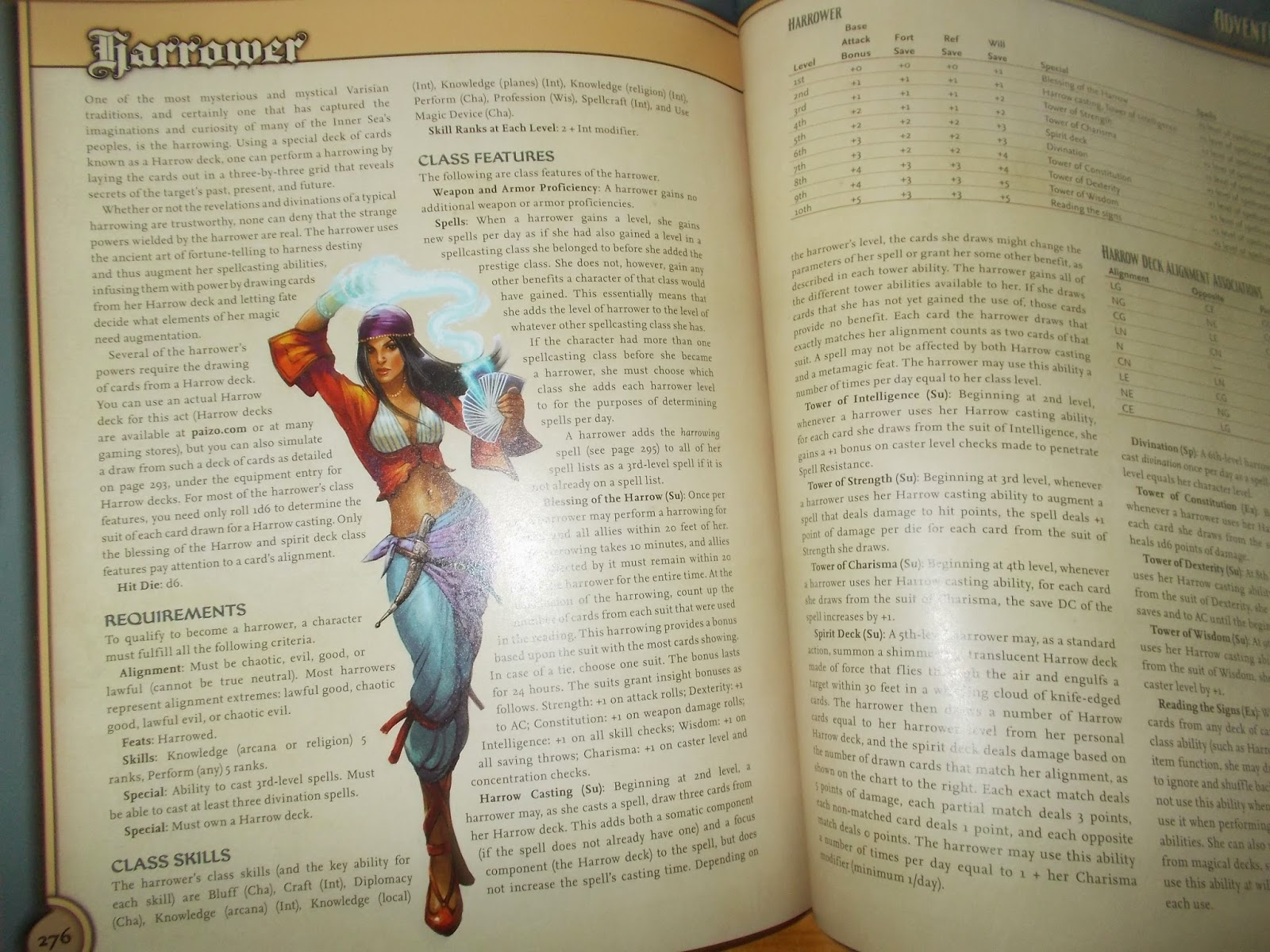 Part Seven covers Monsters, new monsters specifically that aren’t covered in the Bestiaries that form a part of the core set.  Not a long section but colourful and interesting. 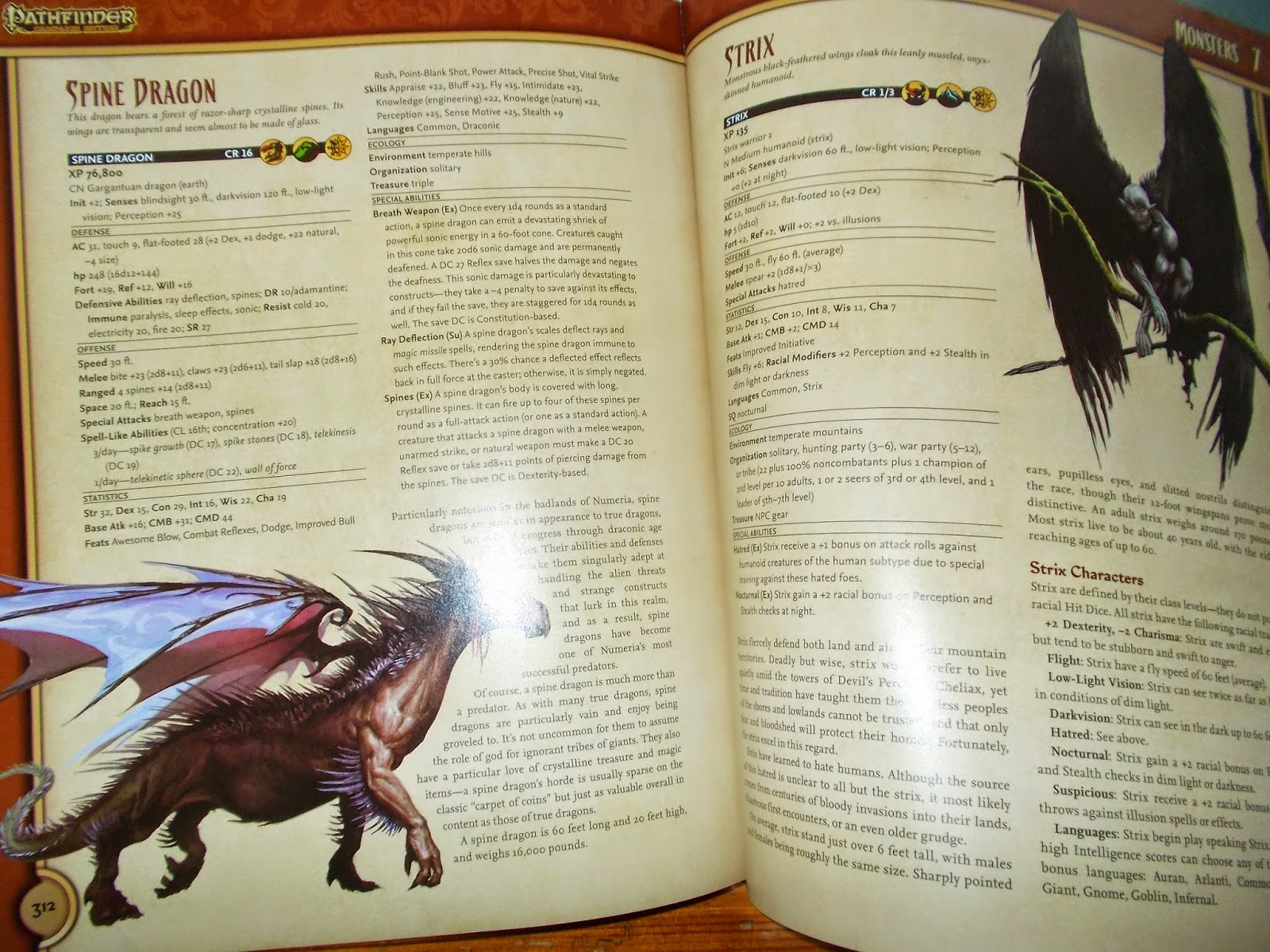 Which brings us to the summation, it’s a worldbook, not a campaign book, so the basic details of everything about the world are what I was expecting from this book.  It needs the Pathfinder basic rules to work from and if you’re going to get out there and hit things, you’ll need one of the Bestiaries as well.  It’s well presented throughout, the amount of art through the book is consistent with what was found in the beginners set, and the images have clearly been commissioned with a particular thing in mind, it’s not used multiple times, and the writing throughout is consistently clear and evocative, which is good for experienced players, but great for inexperienced players, giving them a good impression of the world, the good, the bad, and the ugly within, and the nature of the world that they’re intending on adventuring within.

The final part of the book is a massive map enclosed at the rear.  While not as detailed as the map found in offerings like Numenera, it does the job required well and without any issues. 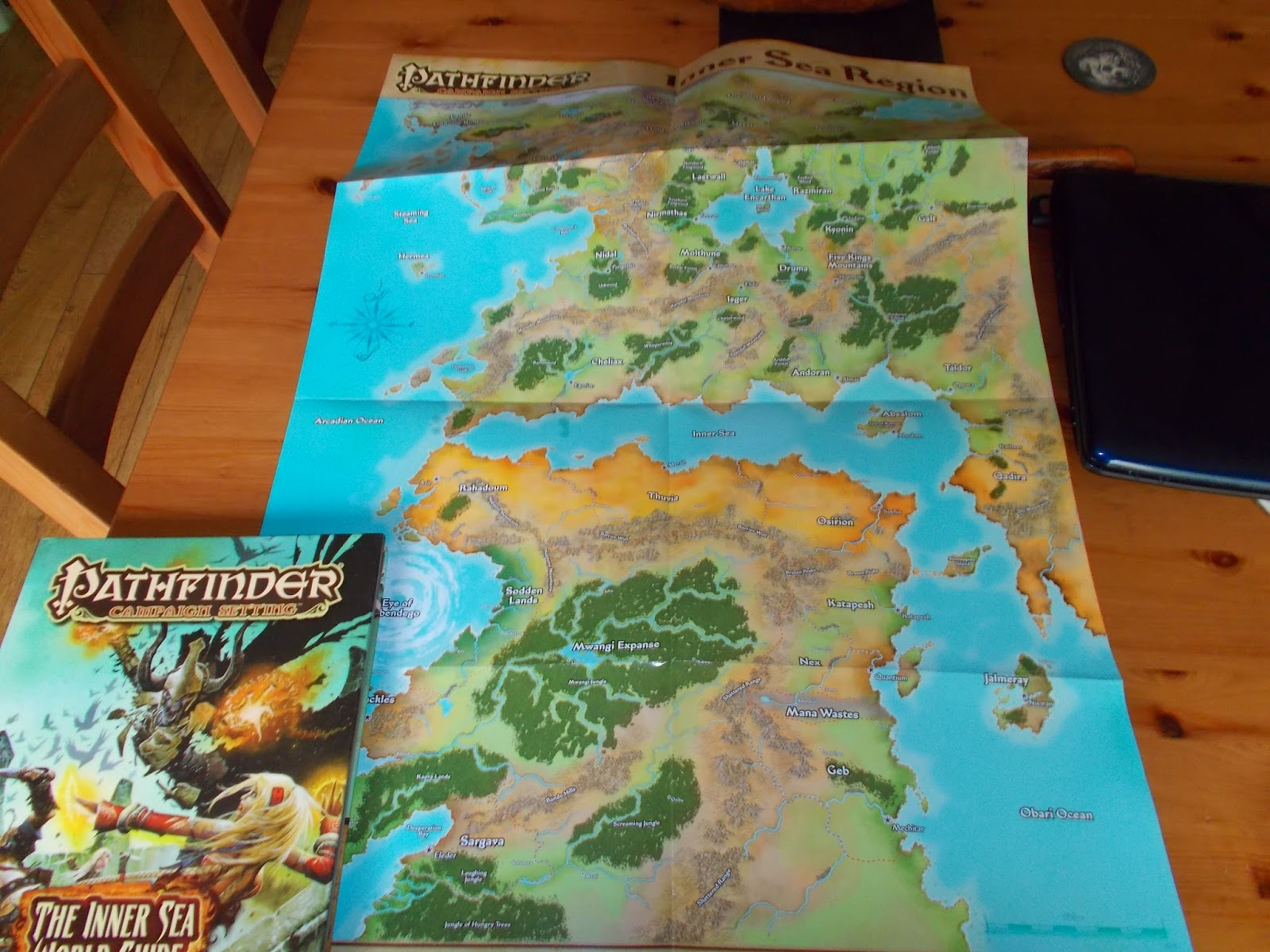 In all, I can’t say that I found this lacking when it comes to the level of presentation given, and this is one of the main books for this particular system, I’ll be reviewing the modules and MRB separately, but this certainly sets a strong precedent that the beginner set does actually have the same production values as the regular products.
Posted by John Dodd at 05:56