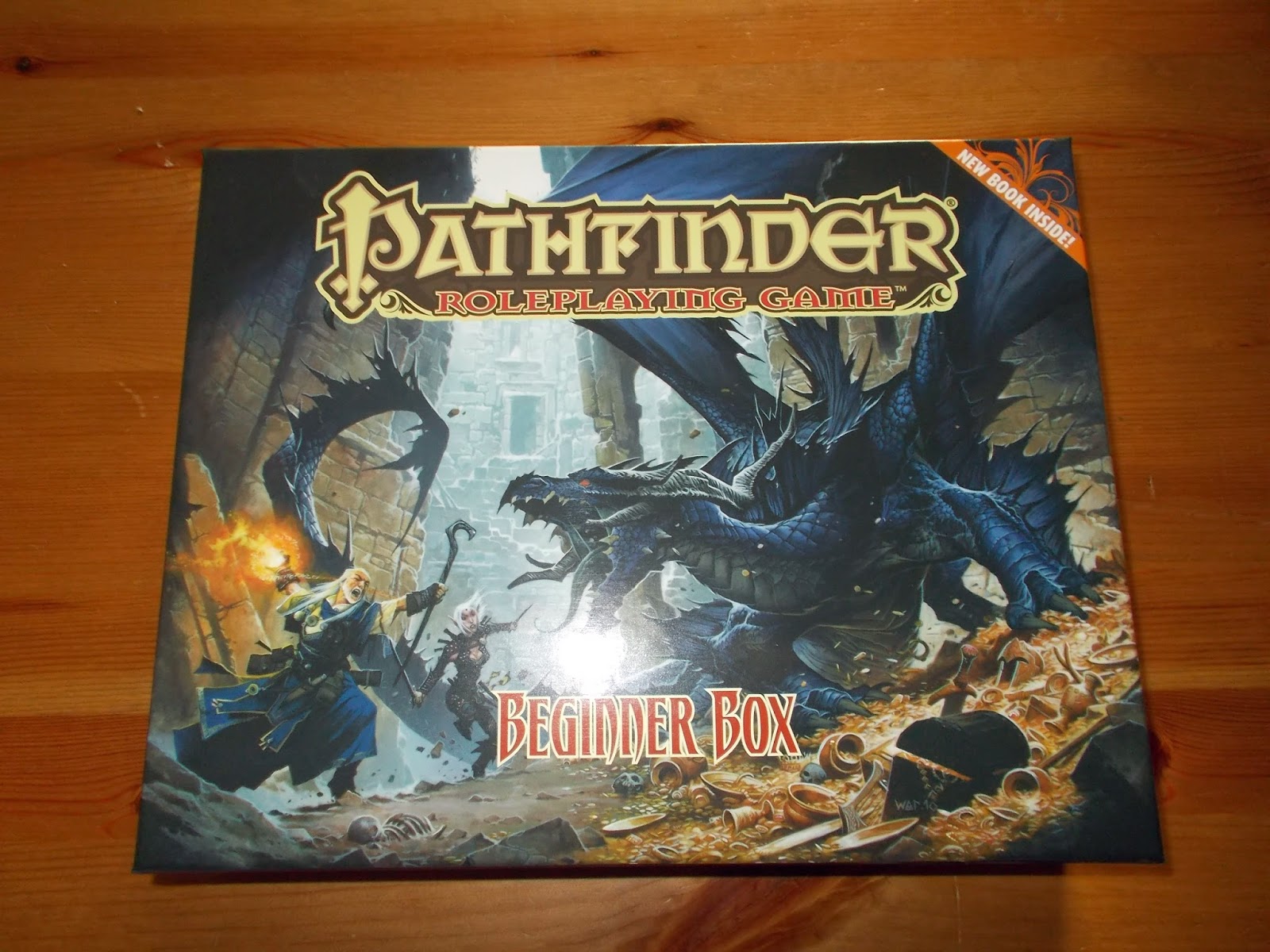 So, following the review of the D&D beginners set a day or so back, I’m now looking at the Pathfinder box set to see if the young pretender has what it takes to take on the crown prince.

First thing to consider is that it’s more expensive than the D&D set, accounting for free delivery on both, you’re still seven quid more to pick up the pathfinder set, so the question is, is the additional cost justified.

First impressions are that the box is a lot heavier, the box itself is heavier card than the D&D set and better construction.  Then it’s on to the contents...

A small page at the top of the box that asks you what you’d like to do straight away, so the first thing you’ve got in your mind is that immediately you’re being asked what you want to do with the game, there’s a number of options from running straight in and playing solo to making characters to just running in with characters that have already been prepared for you. The production values are excellent, everything is good stock, glossy covers, clean printing, proof read well, the characters have a front page that gives you an immediate indication of what each type of character is about. 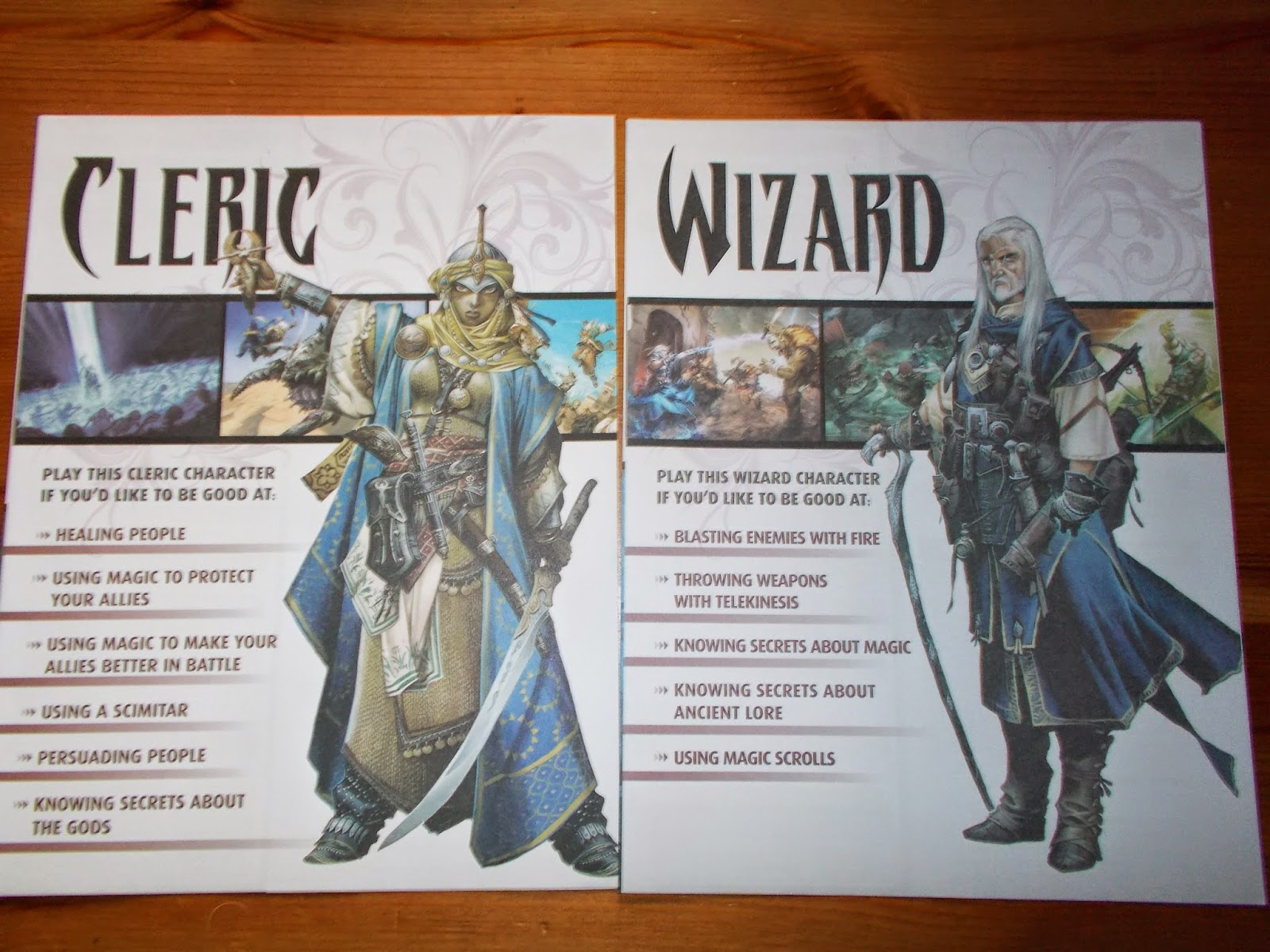 It’s simplistic if you’ve been playing the games forever, but for those who’ve never touched on it, it’s a fantastic addition, letting you throw the characters down on the table and have brand new players immediately get a handle on what the characters can do and why they’d want to play that character. 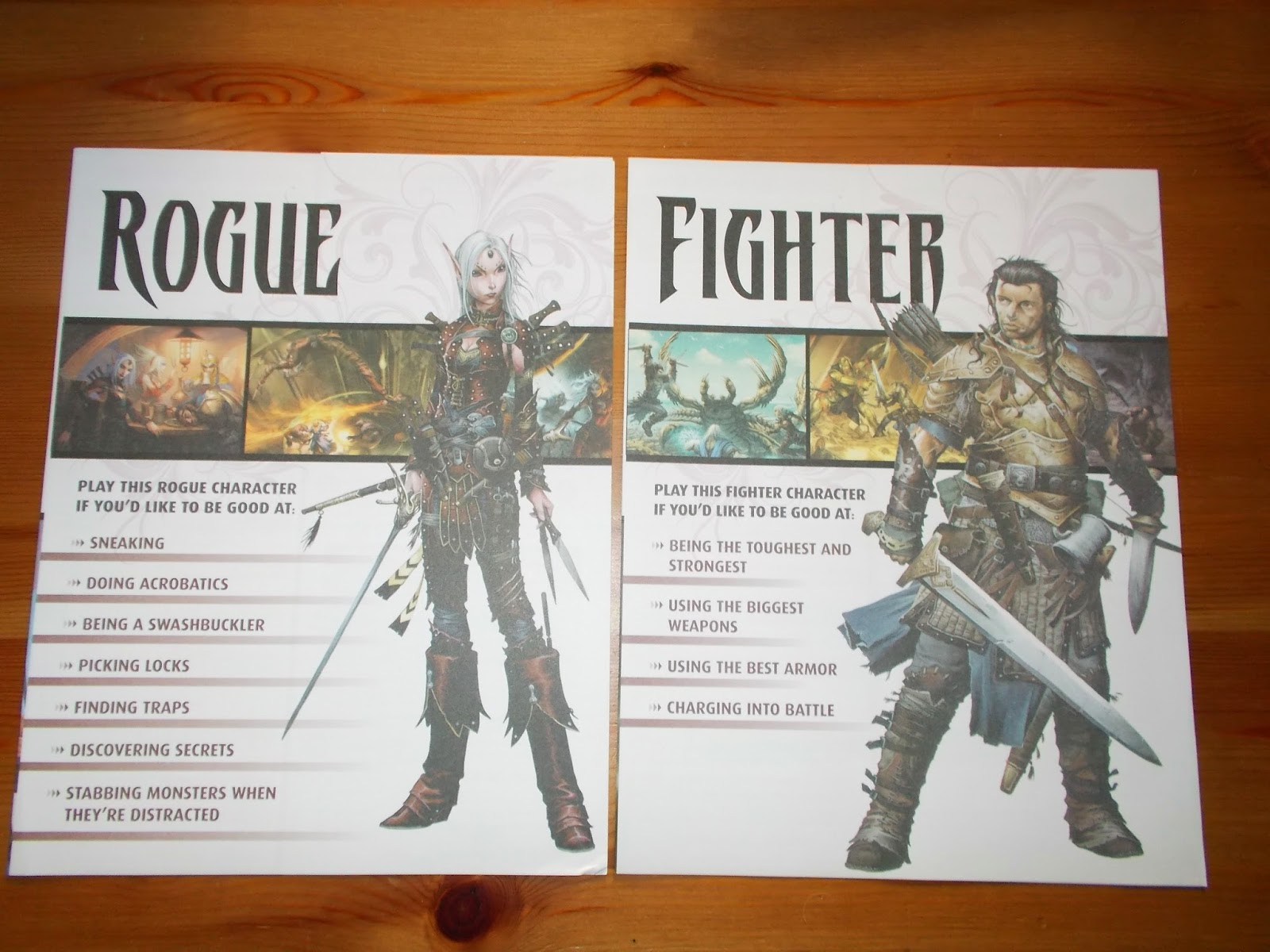 You get a normal set of dice, but the difference between this and the D&D set is that the D&D set asks you to throw the D10 twice for the percentile, this set gives you the percentile, it’s not much, but in the eyes of at least one of the beginners I handed the set off to, it made a lot of difference in the outlook, they’re not asking you to stretch to anything else, you literally have everything you need to play right off the bat. 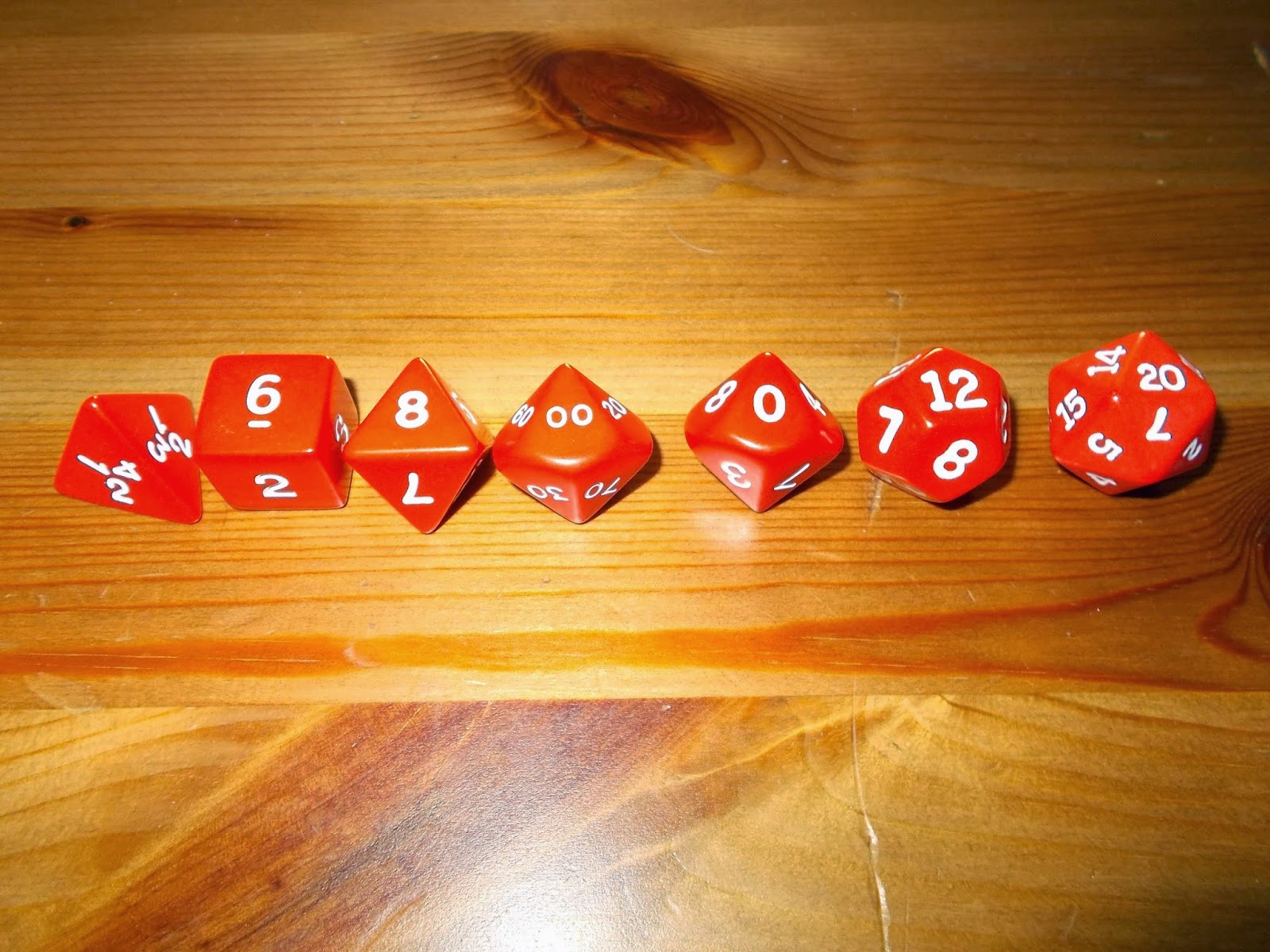 There’s a battleboard, double sided, dry wipe compatible, measuring three feet by two, dungeon map on one side, plain grid format on the other, folds neatly down to fit in the box. 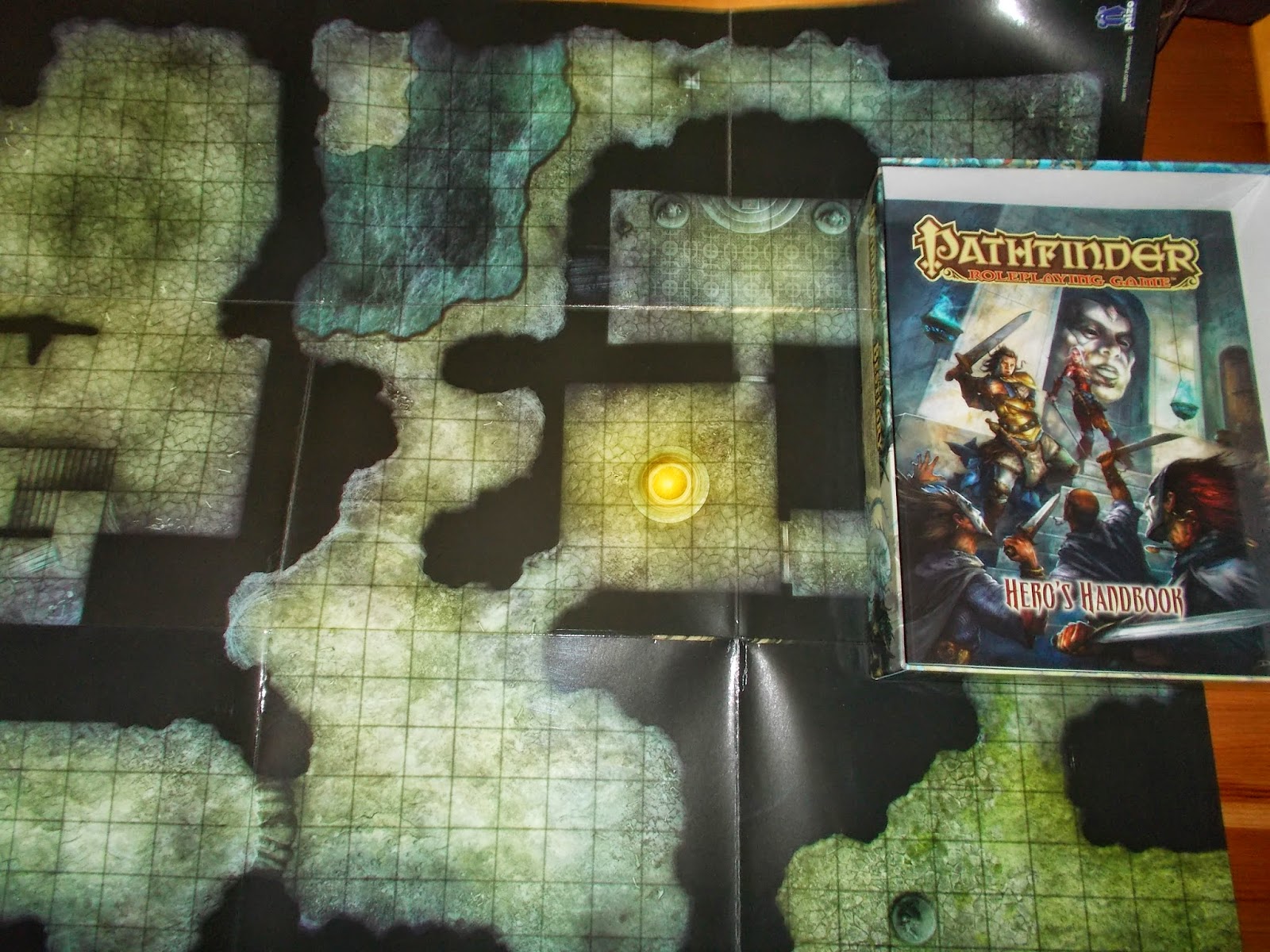 There’s a ton of stand up pieces to be used on the board, ranging from characters and larger monsters. 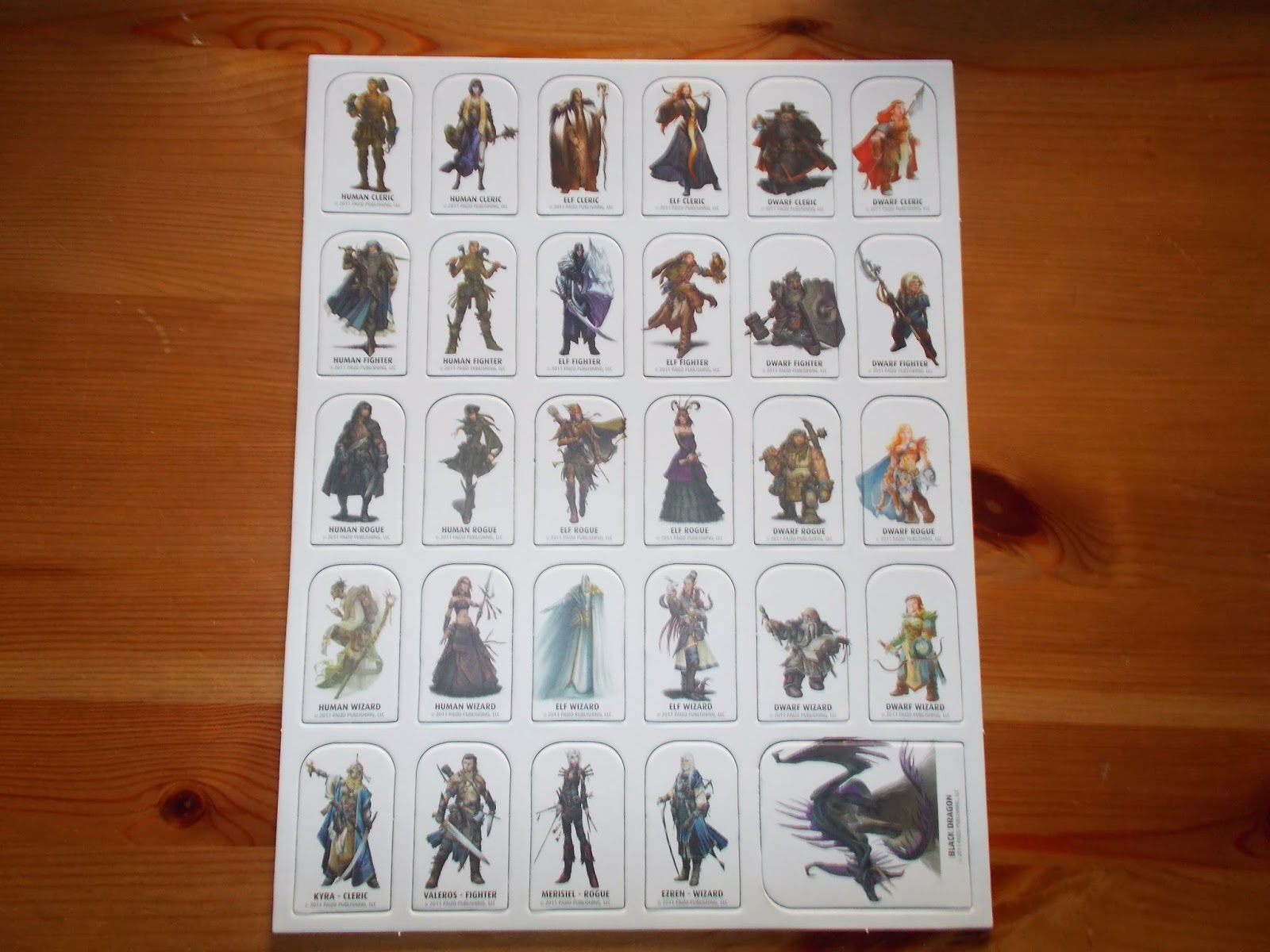 To a variety of smaller monsters... 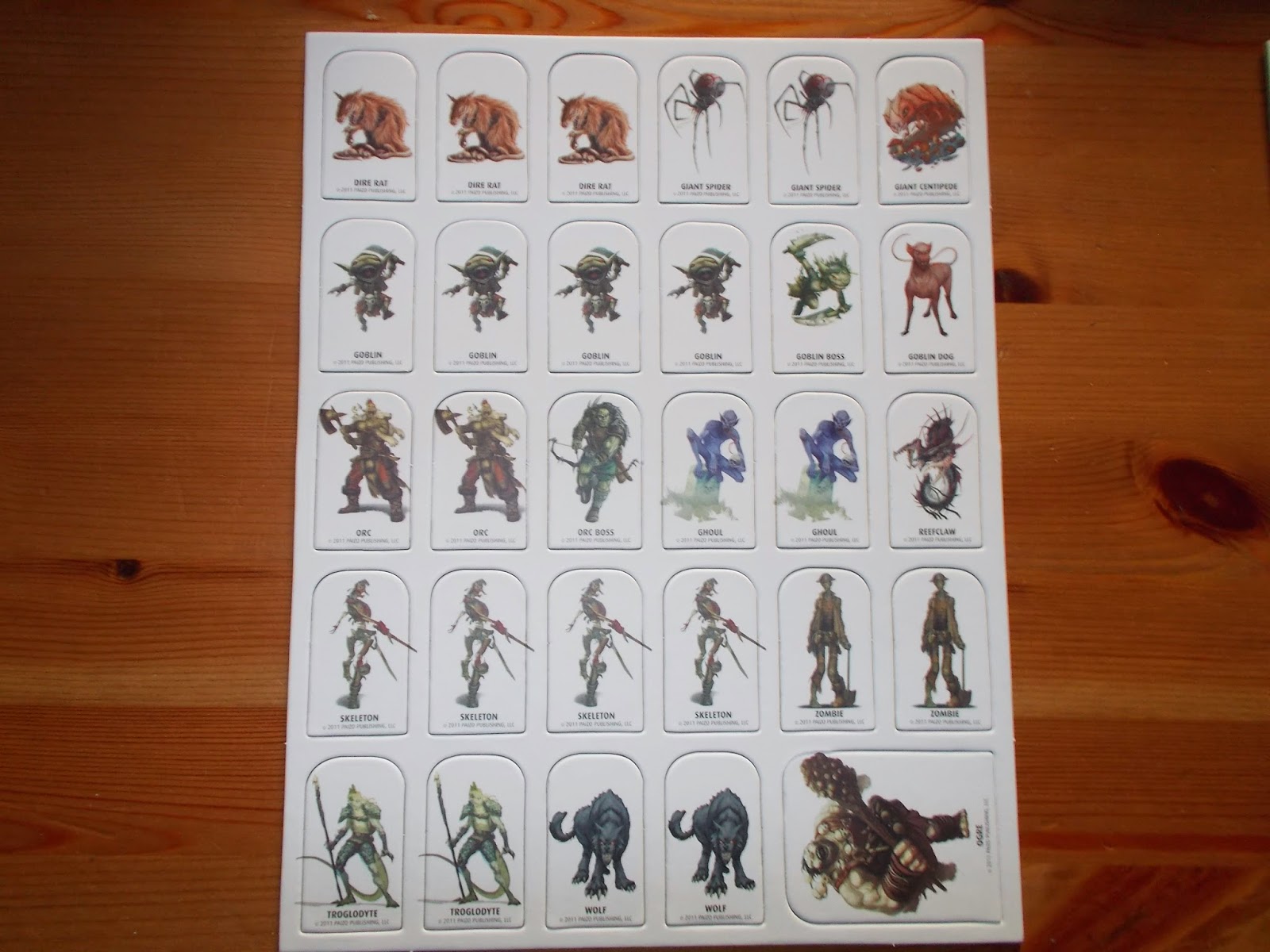 There’s sufficient stands to be using them all at once, and the map lends itself well to the size of the stands, allowing players to get right into things once they’ve started. 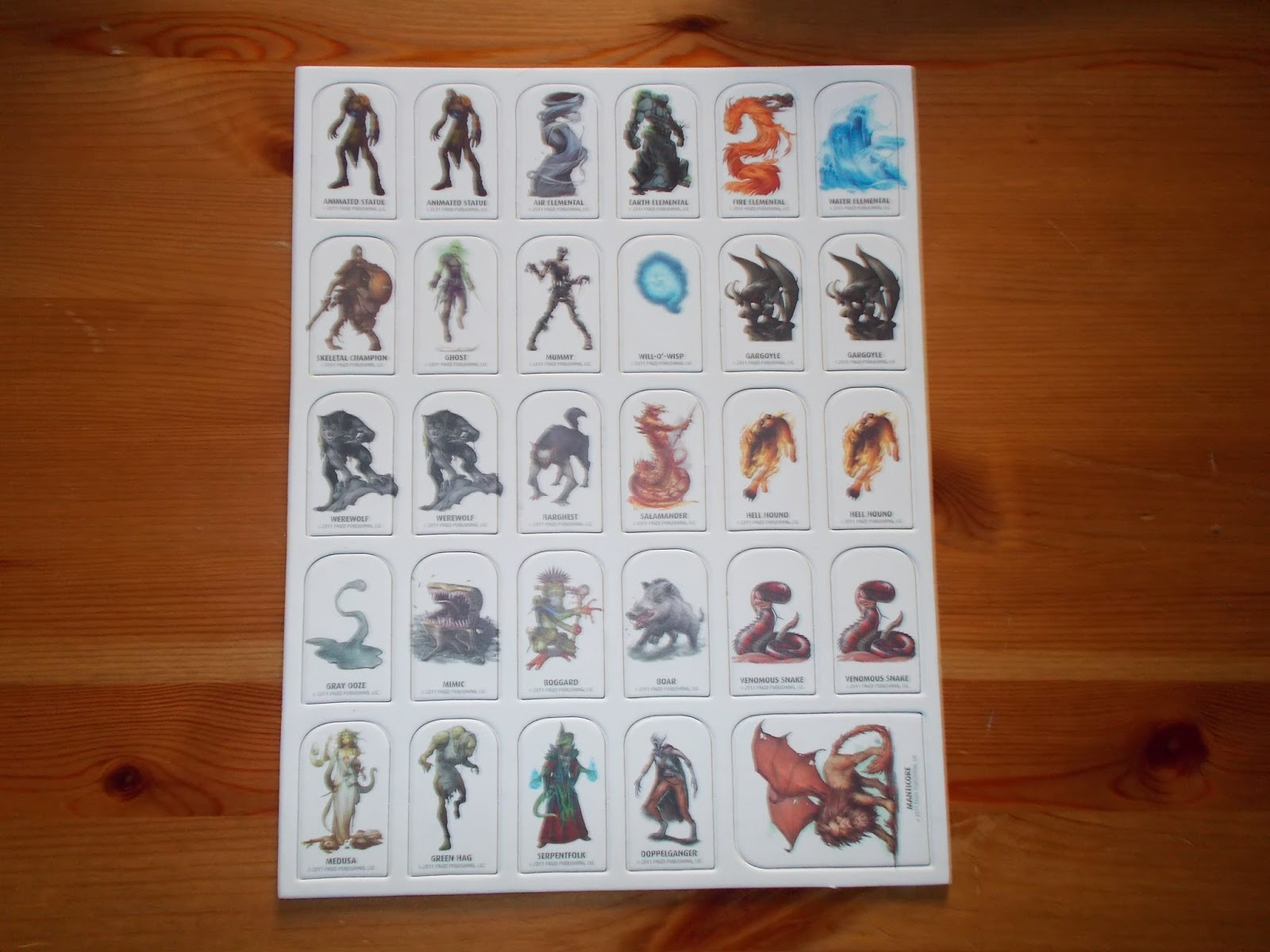 The insides of the books are well laid out and clear in their presentation, there’s never any suggestion that you should know something, everything is explained and made clear so that anyone unfamiliar will have no problem picking up the game and running it.

There are character generation rules included in the box, no need to go looking anything up, and they’re equally clear and colourful, it’s clearly designed to suck you in to the game and the system and it does a really good job of doing that. 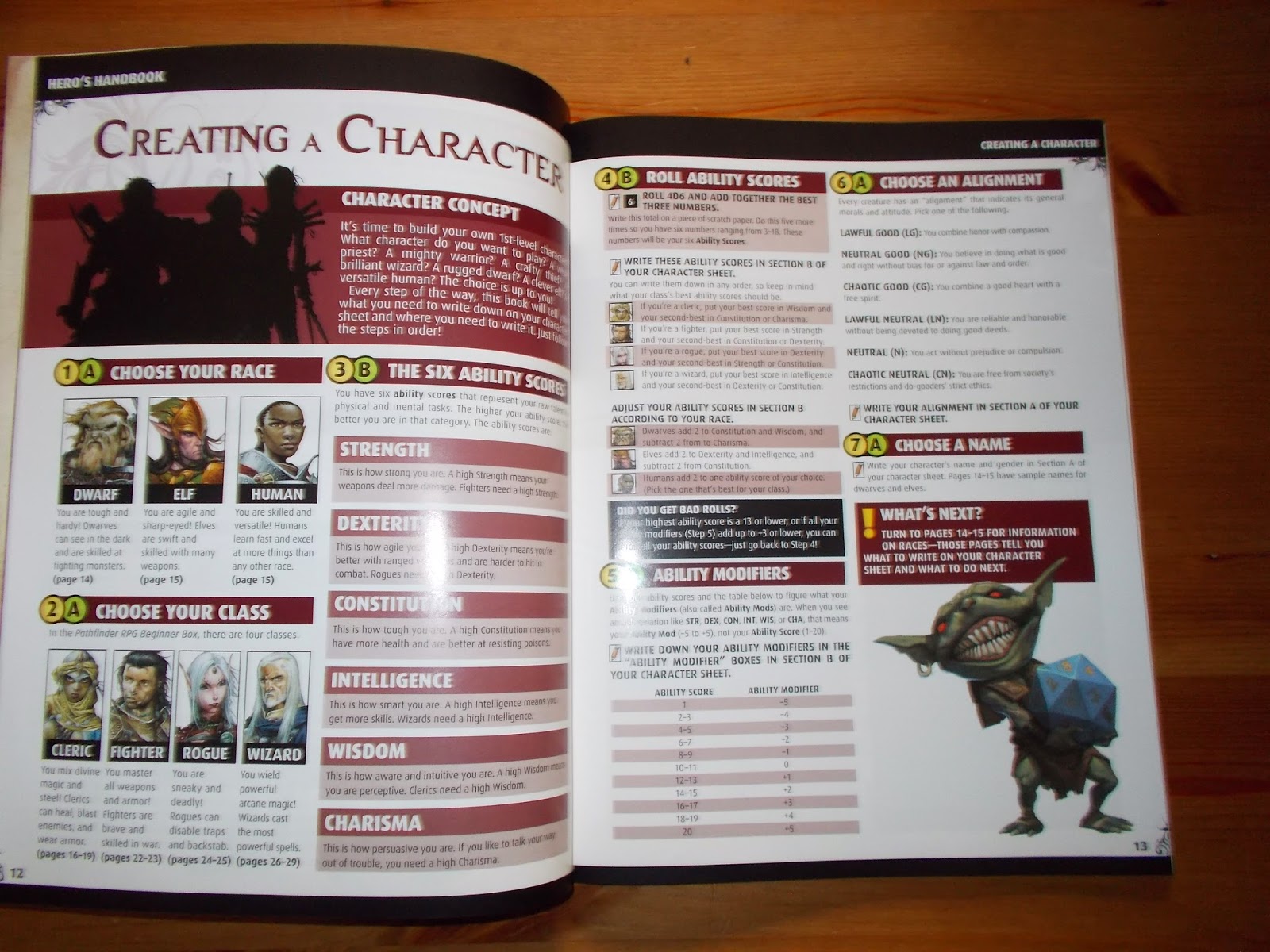 There are three books included with the set, the first is the Hero’s Handbook, with all the details in it required to create heroes, the rules of playing the game, and not a single thing about running it or anything that’s unessential for you to know as a player.  It also includes a choose your own adventure game at the front that allows you to jump straight in and get an idea of the rules before you’ve even showed the box to everyone else. 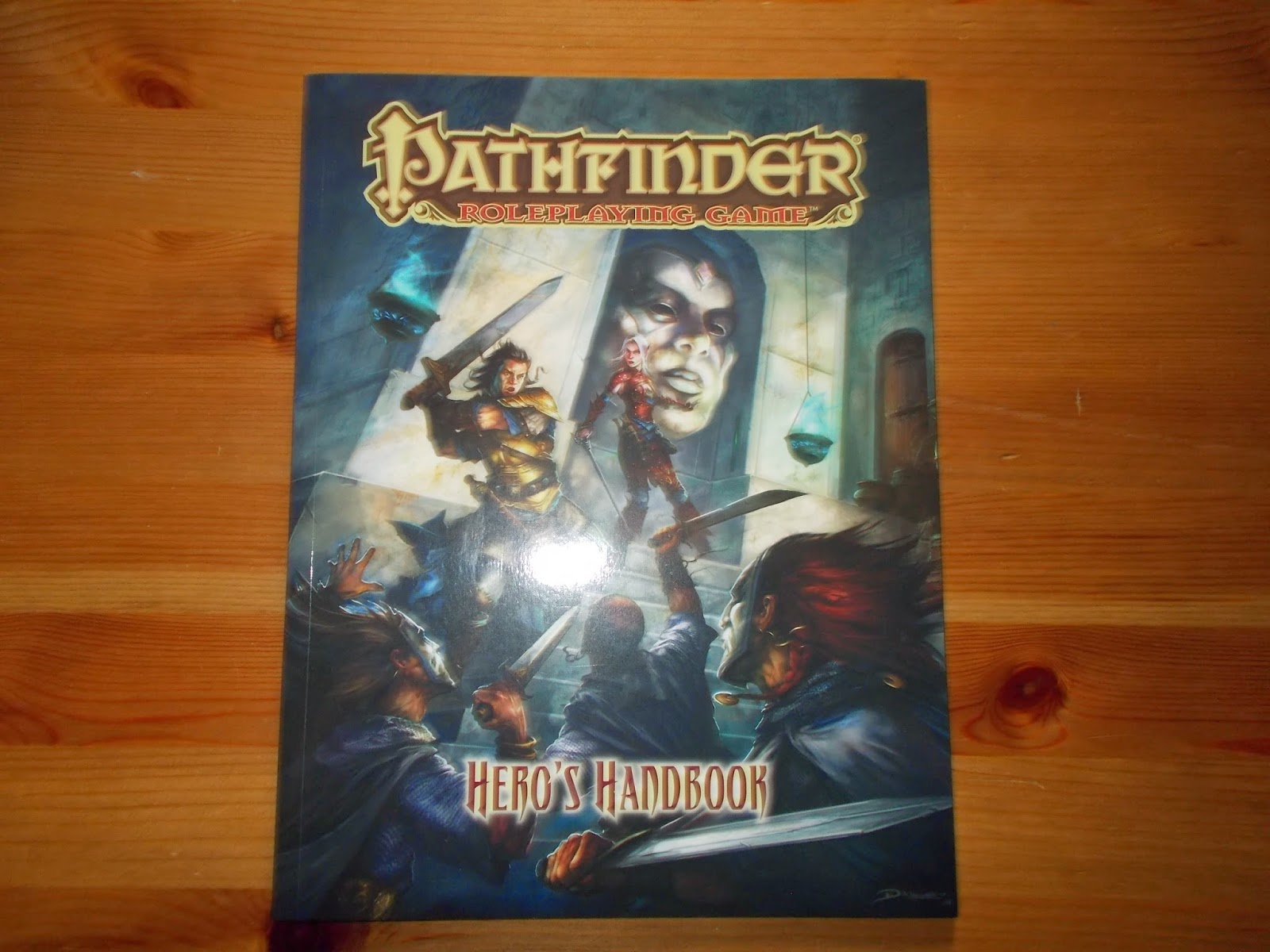 It’s nothing complex, merely a swift dungeon crawl, but it doesn’t pull any punches, it’s reasonably easy to get killed if you’re reckless, but it sets the scene nicely, puts points in where people who have read the scenario and the background will do better than those who haven’t, and gives you an idea that this isn’t one of those games where you endlessly respawn when you die... 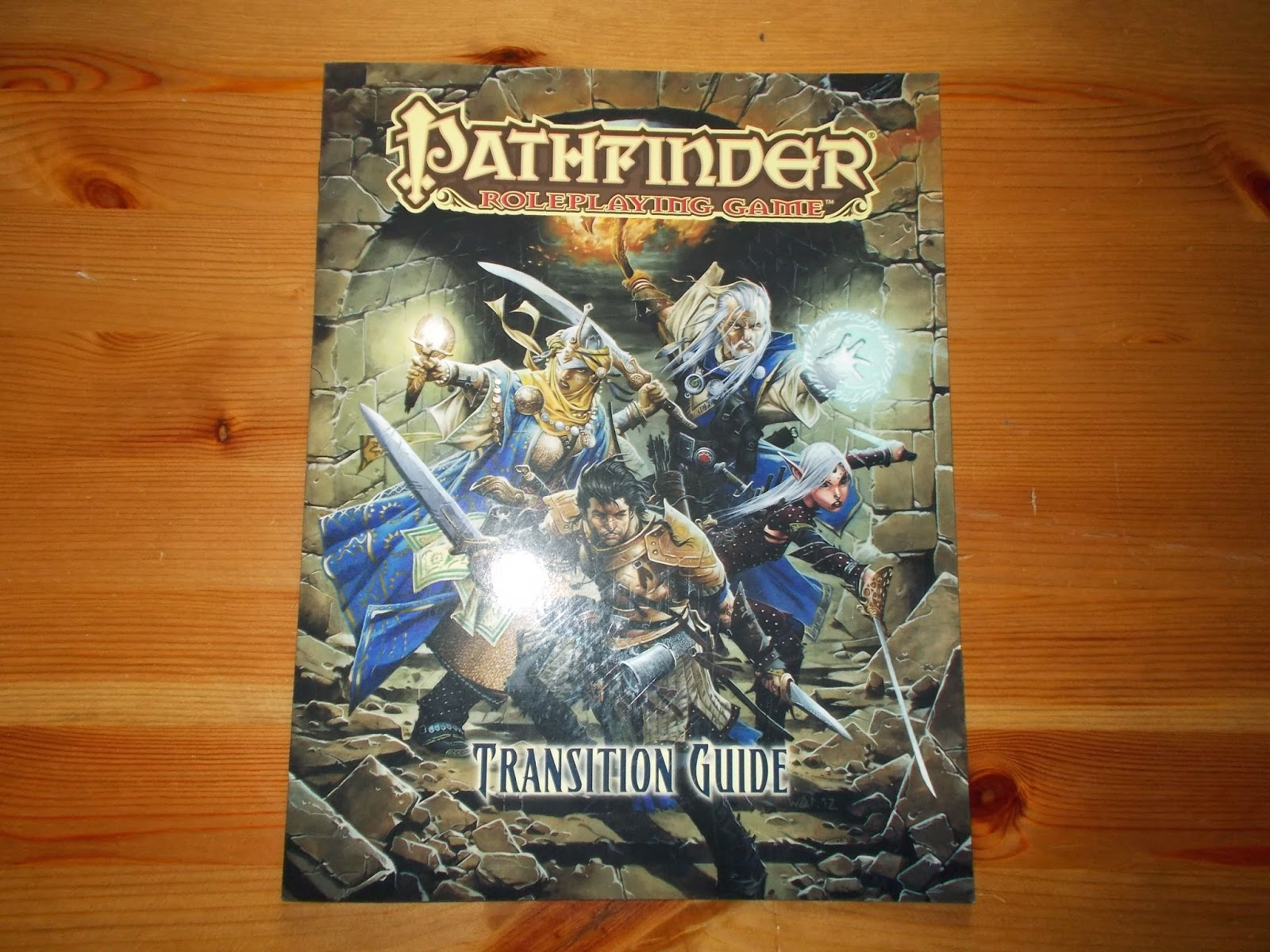 Then there’s the transition guide, which gives you the details of what to expect when you go from the beginners set (which will get you to around 6th level) to the worlds beyond as detailed by the main rule book.  The book is pitched towards reassuring beginners that the enormous main rule book isn’t something to be scared of, and that they don’t have to read the whole damn thing, just the bits they need at the time. 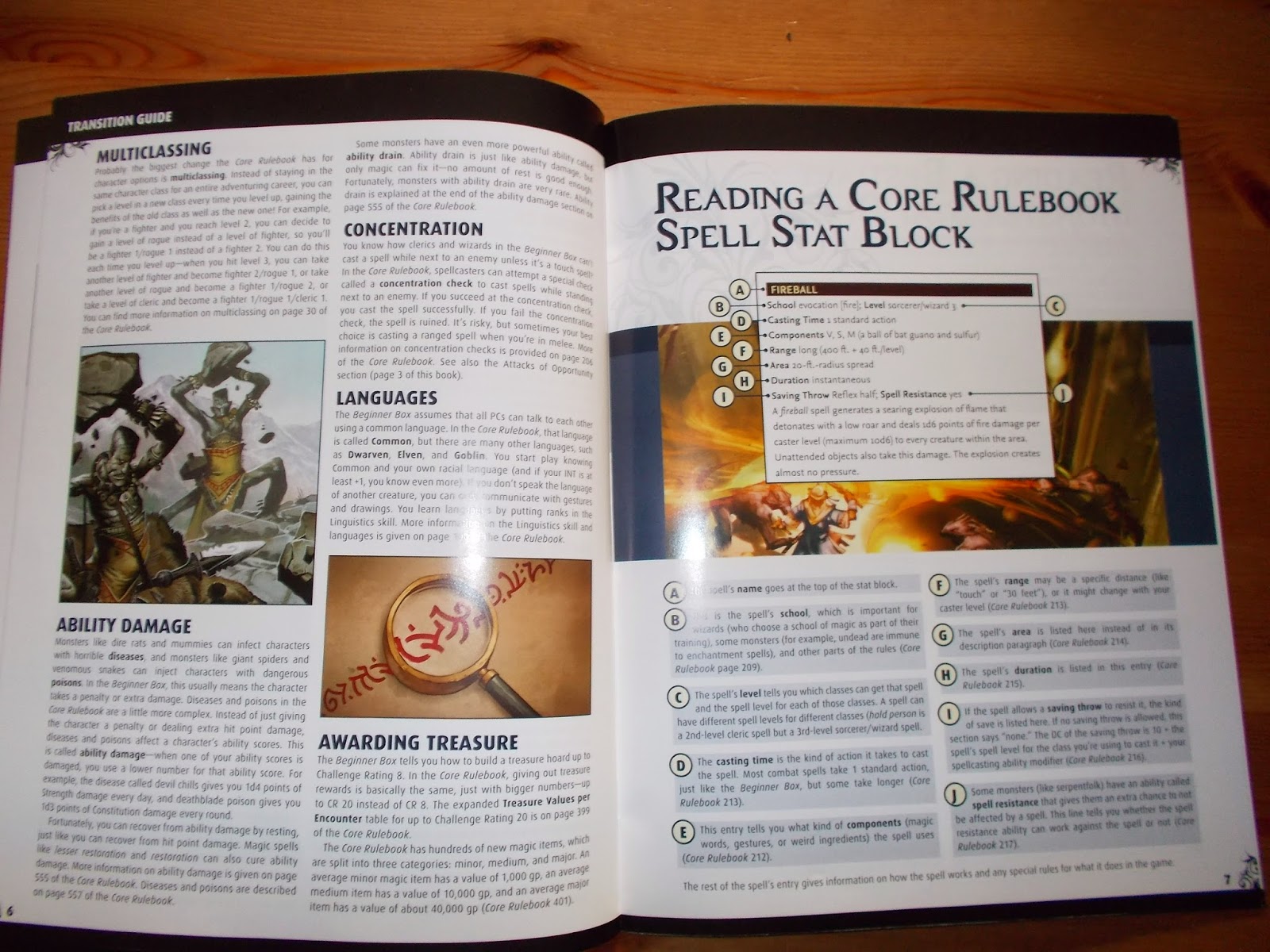 Final book is the Games masters guide, with all the details to run the dungeon adventure on the dry wipe map and then the details of how to provide a fun environment to the players, it doesn’t sugar coat things, and to my cheerful surprise, provided a whole set of instructions that outlined what is expected of a good GM, most of which echoed my thoughts from a few posts back. 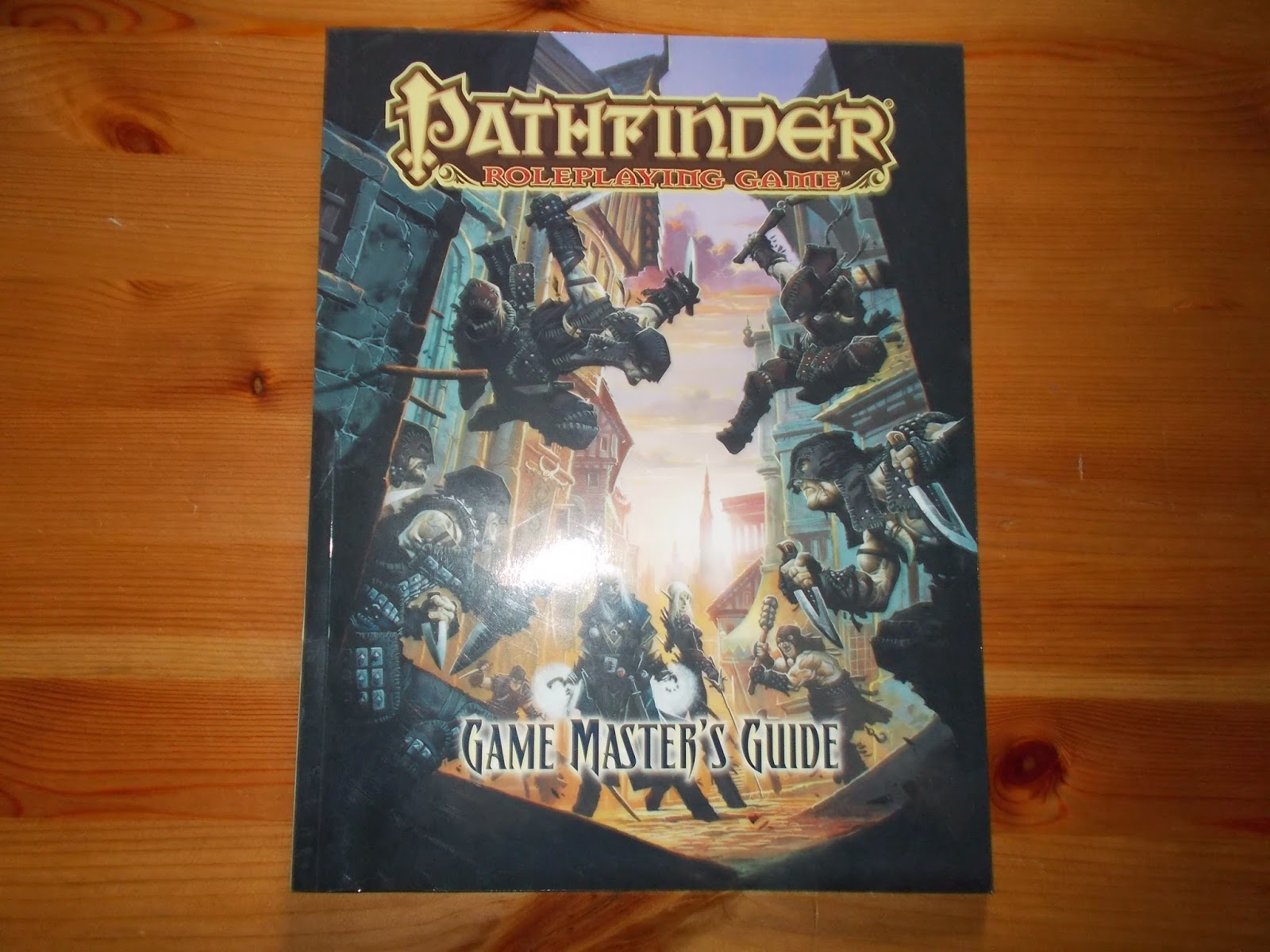 In all, it’s excellent, there’s a clear sense that the producers of this box want you to play the game, they’ve given you enough in the box for a whole bunch of adventures before you ever have to go and buy any other books, and that includes free download links to other products on the website should you not feel ready to run things just yet.

I’ll post the commentary from the beginners regarding both this and the D&D starter set tomorrow, but for anyone thinking of introducing people to a fantasy roleplaying game, they really can’t go wrong with this set.
Posted by John Dodd at 14:47