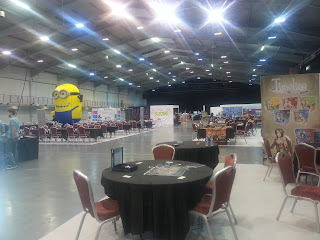 So, some time back I mentioned that there was a new convention coming out that was starting with a very bold four day event and run with 24/7 gaming, this was to be called Strategy Games Con and it was sponsored by MCM expo events.

This last week has seen a few things change in the event, with little to no notice to those attending the event.  The first of which was the loss of the thursdays gaming, a change which only became apparent on tuesday, then yesterday the change of times for the event from an 0900 start to a 1300 start.

Suffice it to say that if I hadn't known the person running the event, I would have been curious to see if the rest of the event was going on as planned, and when I got there, it was apparent a number of other people had had similar thoughts.

But I was already down there as I promised I would be, so I dropped in...

Arrived on site around 11:00 to find the redoubtable Andrew Prowse already on site, as he had been from 09:00, and certainly the best dressed man on site, which given his new kickstarter (Top Hats and Treachery) was entirely suitable. 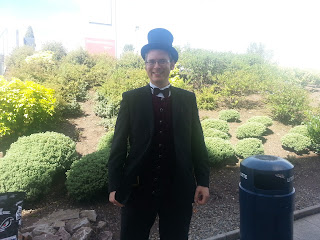 And so into the hall to make sure the few RPG's I'd managed to arrange were all set up and good to go, I had no fear with Simon Burley leading the charge, but when I've said I'll help, I always turn up to keep my promise.  As it turns out, Simon was already on site, closely followed by Robin Poole, and of course, one of the I love the Corps crew who brought possibly the best badge of office I've seen in recent times.

Took a look around the trade hall, which was smaller than had been advertised, but had a few interesting traders there, including KakapopoTCG, a new retailer that dealt with wooden puzzle boxes for dice and play pieces, completed with intricate mini padlocks and other curios, then old favourites like Dicing on the Cake.  With Battlefield Hobbies pulling out last minute, it has left a large hole in the programming, but they're doing what they can to fill that gap. 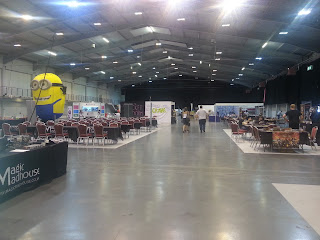 Caught up with the Esdevium demo team on site, good to catch up with Mick and Kat and see that they were on top of things, but I do feel that the last minute changes in the lineup that didn't get communicated well reduced the number of people coming along on the first day, particularly with it being a new convention and not yet proven.

I wasn't needed to help at this, so we pulled off site and headed home, I hope it gets more people tomorrow, there's a few people who are staying over who've said they'll get some photos and post them up.  I can confirm that the gaming will be open 24 hours a day across the weekend contrary to some rumours that went on earlier in the day about the saturday and sunday being reduced to 10:00 to 16:00 (those being the times for one of the events in there.), and that the cafeteria area out front is the open gaming (the signs are on the wrong side of the pillar, don't be fooled), and while I'm not there, I am interested in how they do this weekend, so if there's anyone there, get in touch.