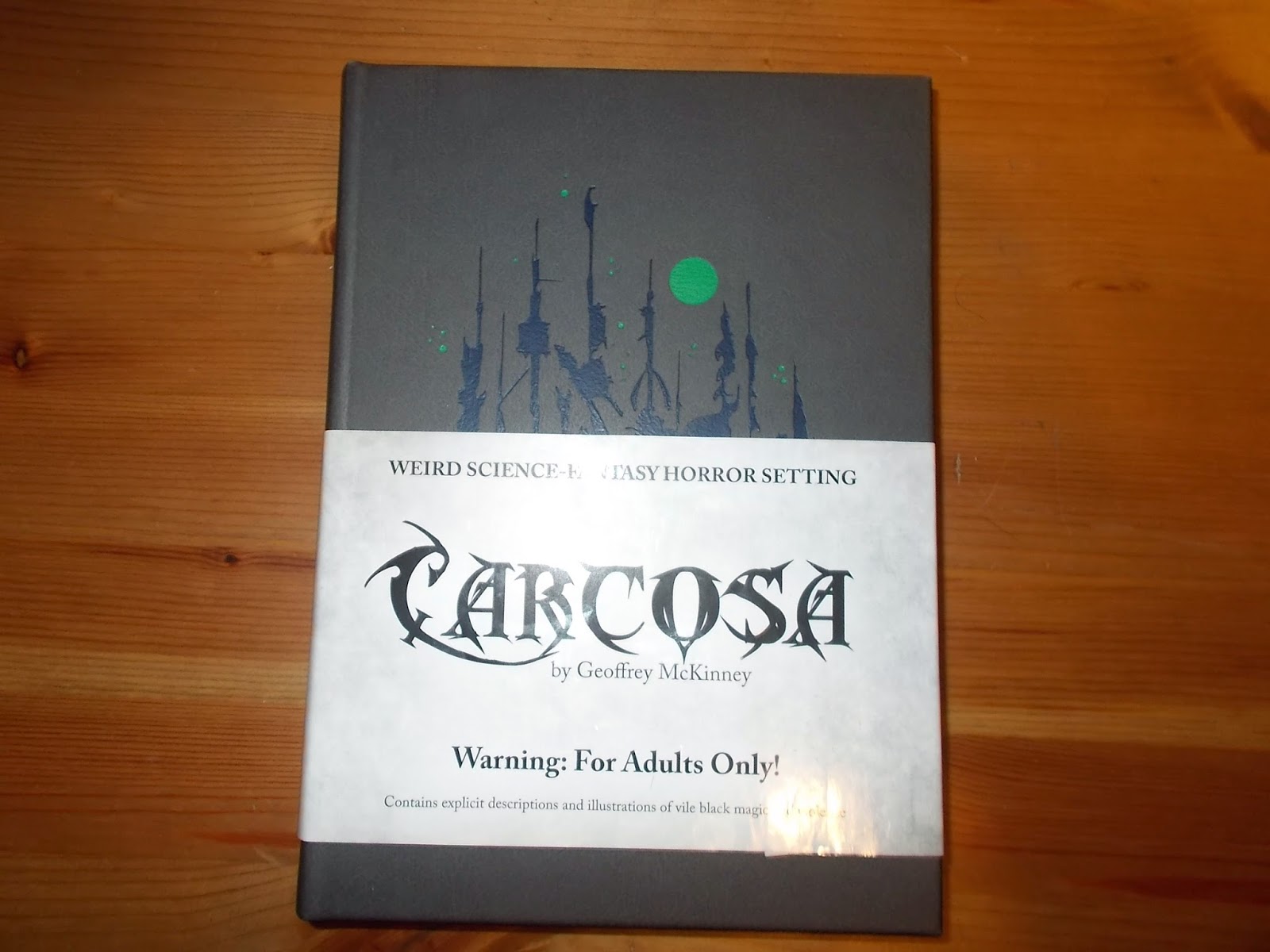 It’s rare that you get books in this day and age that embrace the mentality of the older books, when the setting would comprise of a single book with hundreds of locations and nothing else to go with, so you could play the wandering game of starting at the top of the map and going down towards the bottom and seeing what you encountered on the way and know it would never be a random encounter. 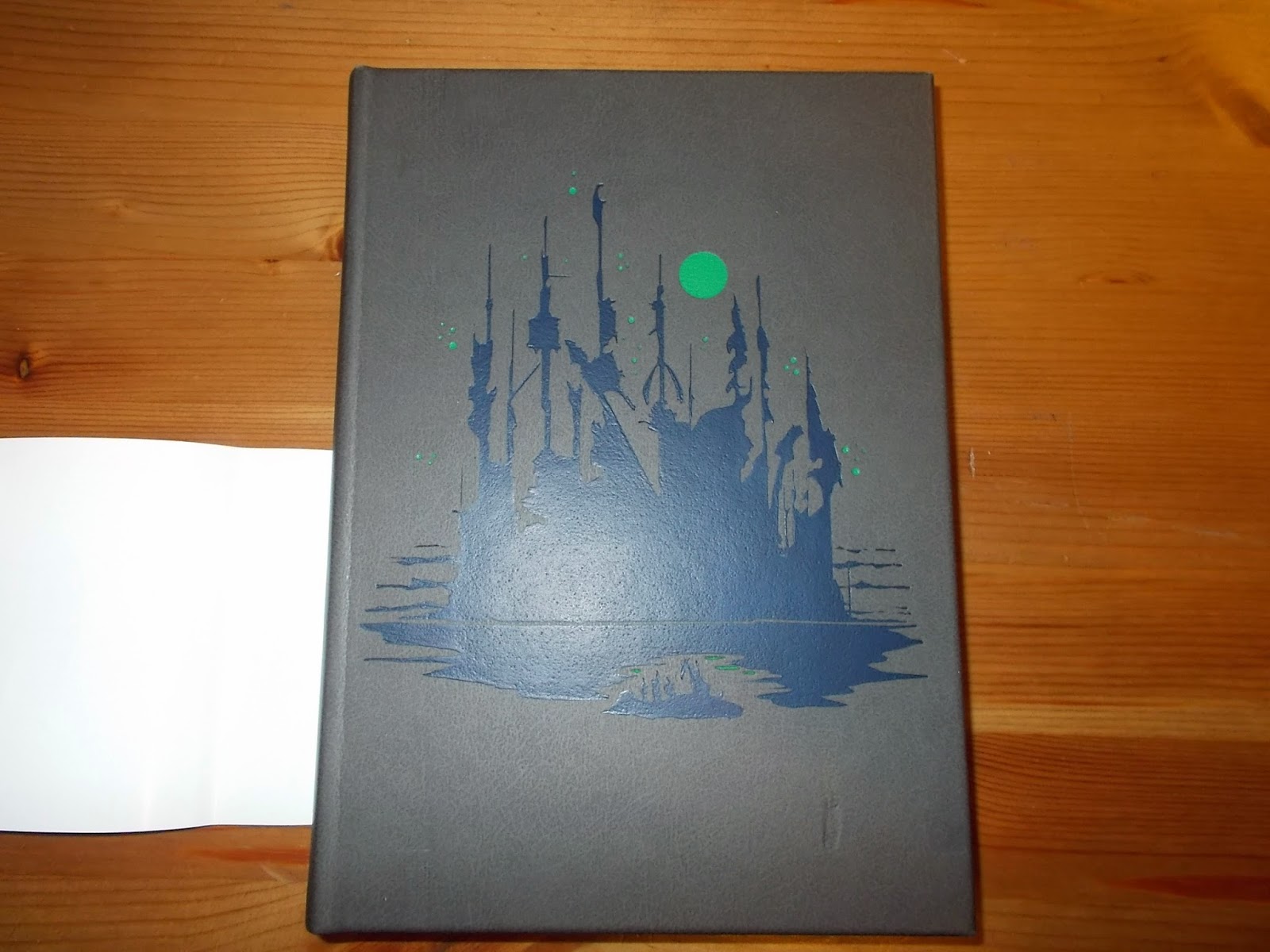 The problem inherent with settings books like these is that for the most part they’re just a set of encounters, and while that’s fine if you’re playing it in the manner of a wargame, going from point to point and just solving the encounter there, but it makes for significantly less fun if you’re trying to form a meaningful campaign out of the setting. 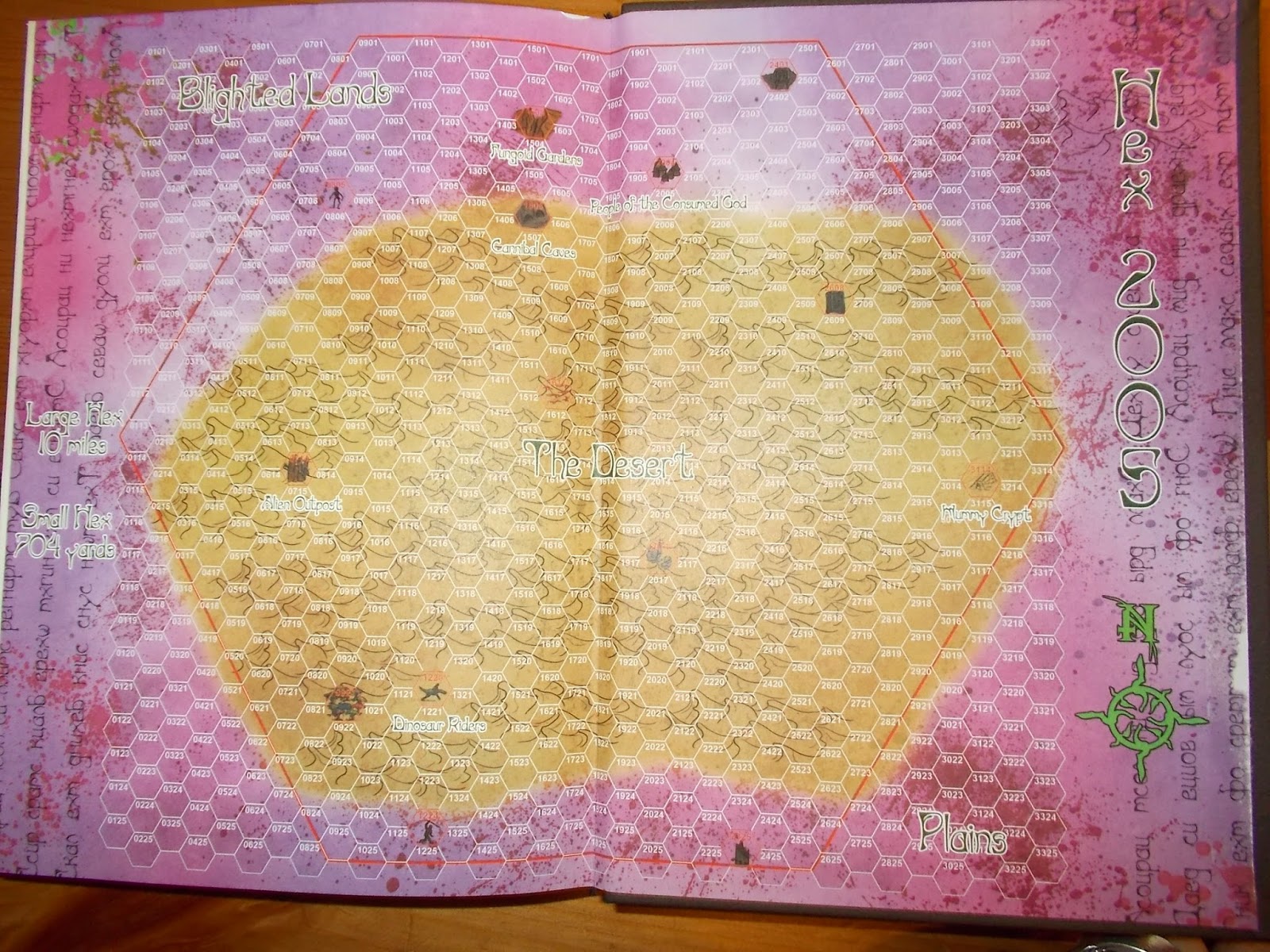 Originally, Carcosa was the name of a city in the Ambrose Bierce story “An Inhabitant of Carcosa,” wherein it was described after it had been destroyed and in scant detail.  Since that time, the name has been used for a variety of stories, worlds, and settings, most of them to do with the Lovecraftian Mythos in one way or another. 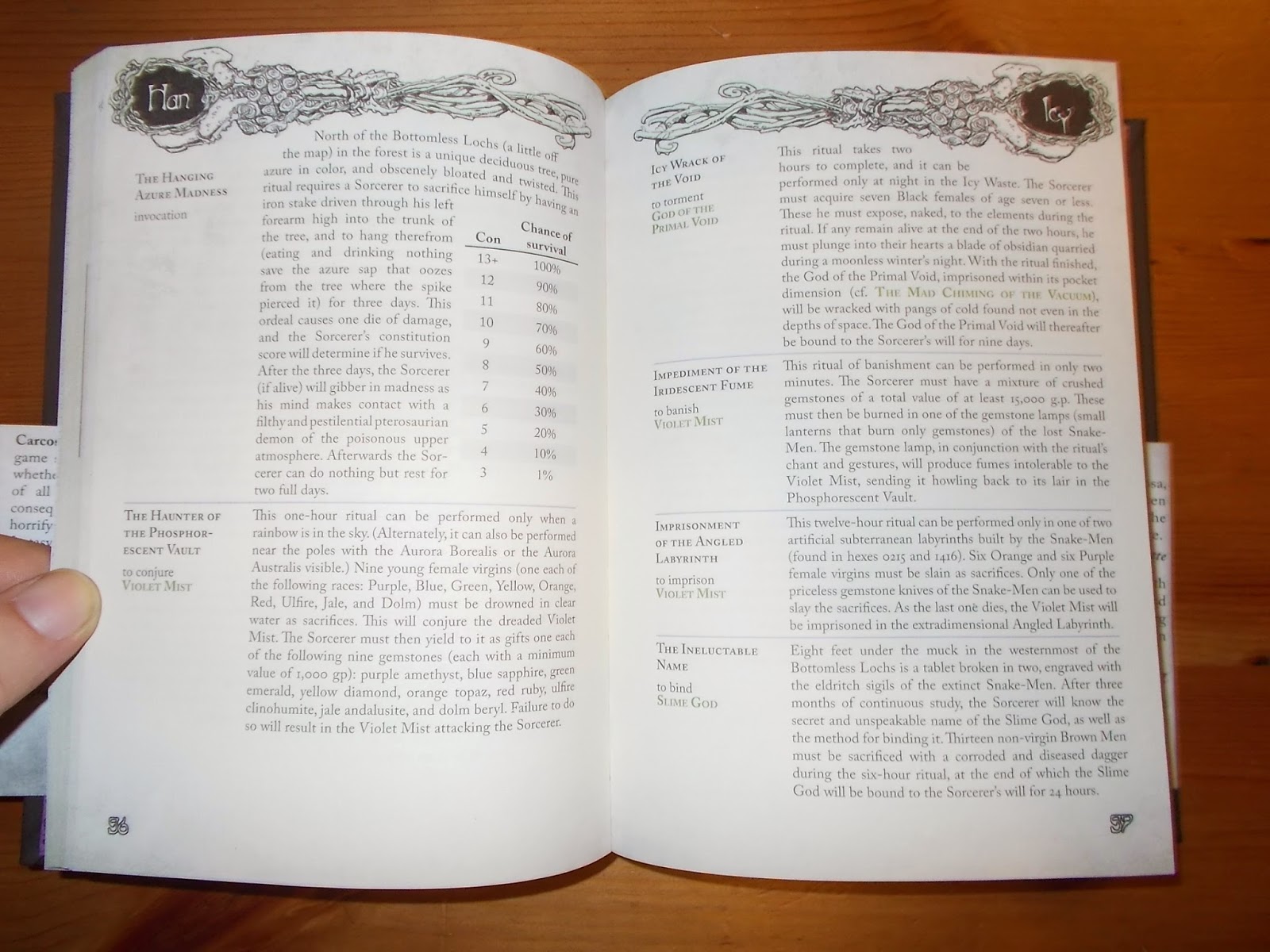 This latest book is a planet called Carcosa, and as you might expect, the general inhabitants of this planet are either their strange creatures of the mythos, those imprisoned as slaves upon it, or the sorcerers who seek to gain the power of the gods and demons that live there. 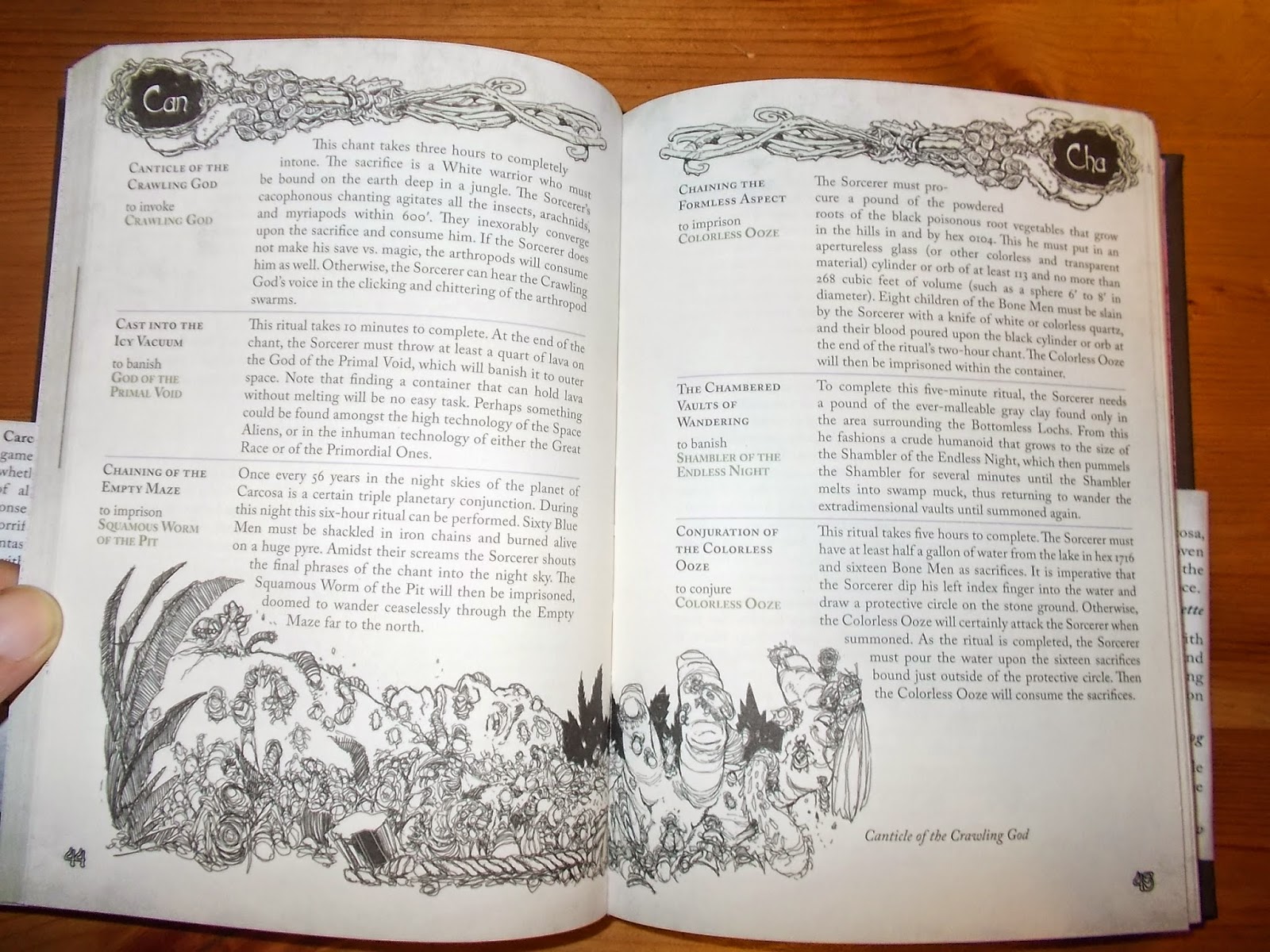 From the beginning of the book (starting at the cover), it’s made clear that this isn’t a book for the faint of heart or those with no tolerance for adult issues, and when you start to read the contents of the book, it becomes apparent that they’re not joking when it comes to that.  There are details of a number of spells and rituals within the book, many of them dealing with human sacrifice and the torturing of innocents and enslaving of entire peoples to achieve the results that the sorcerer wants.  It doesn’t stop there, there are details of atrocities within the book that the various demons and gods conduct and the ways in which they can be helped or hindered, not to mention the details of how little hope there is in the world and how the darkness is an ever spreading tide of evil. 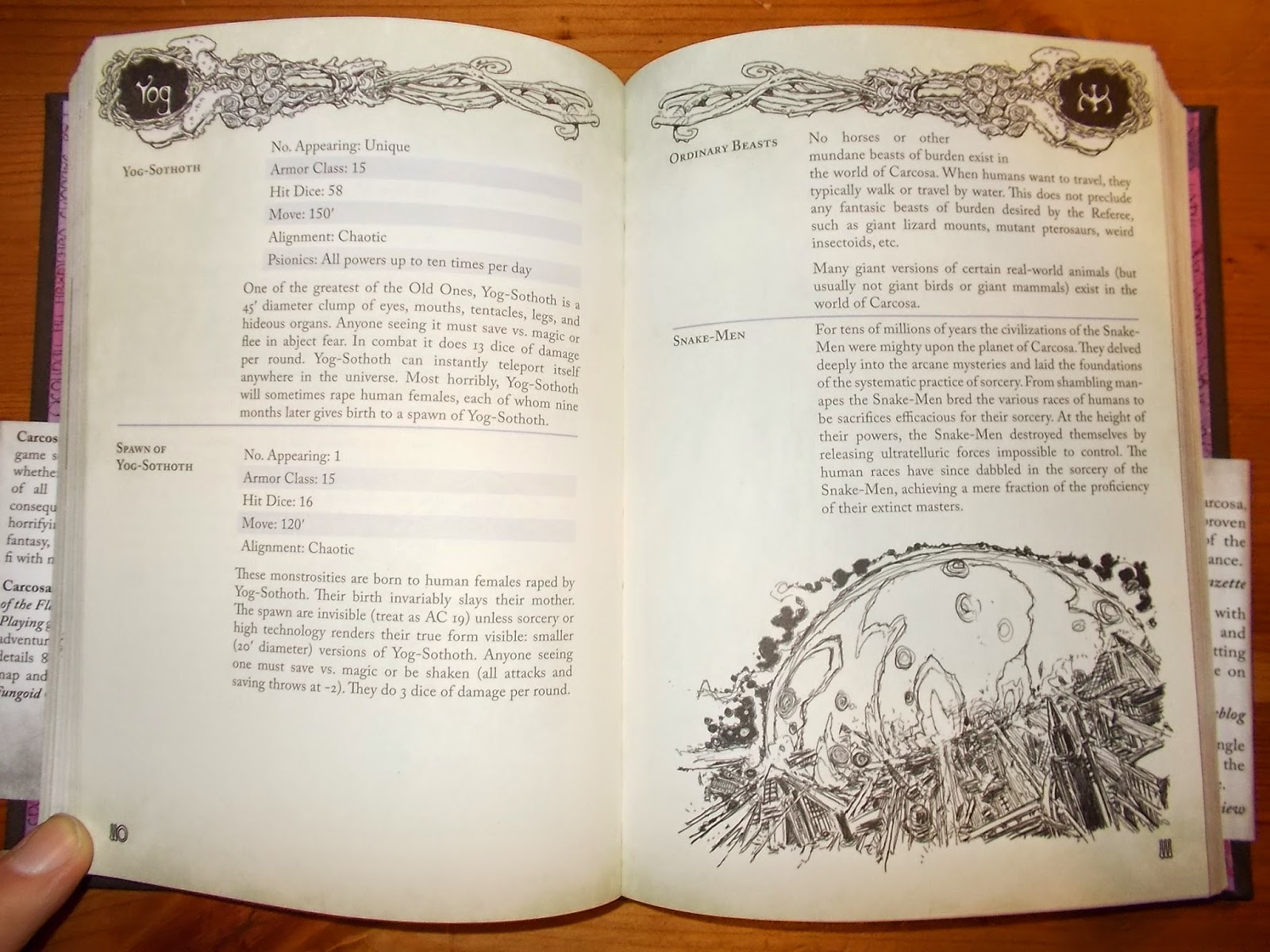 What makes this book different is that everything is described in detail, but without any slant towards the good or evil of it.  Everything is neutral, and it’s the description of such things without any moral slant on them, as if it’s simply what happens in this world, that makes it all the more horrifying.  Most of the inhabitants are just trying to get by, hoping to get through their lives without being abducted and used by sorcerers or gods in pointless experiments. 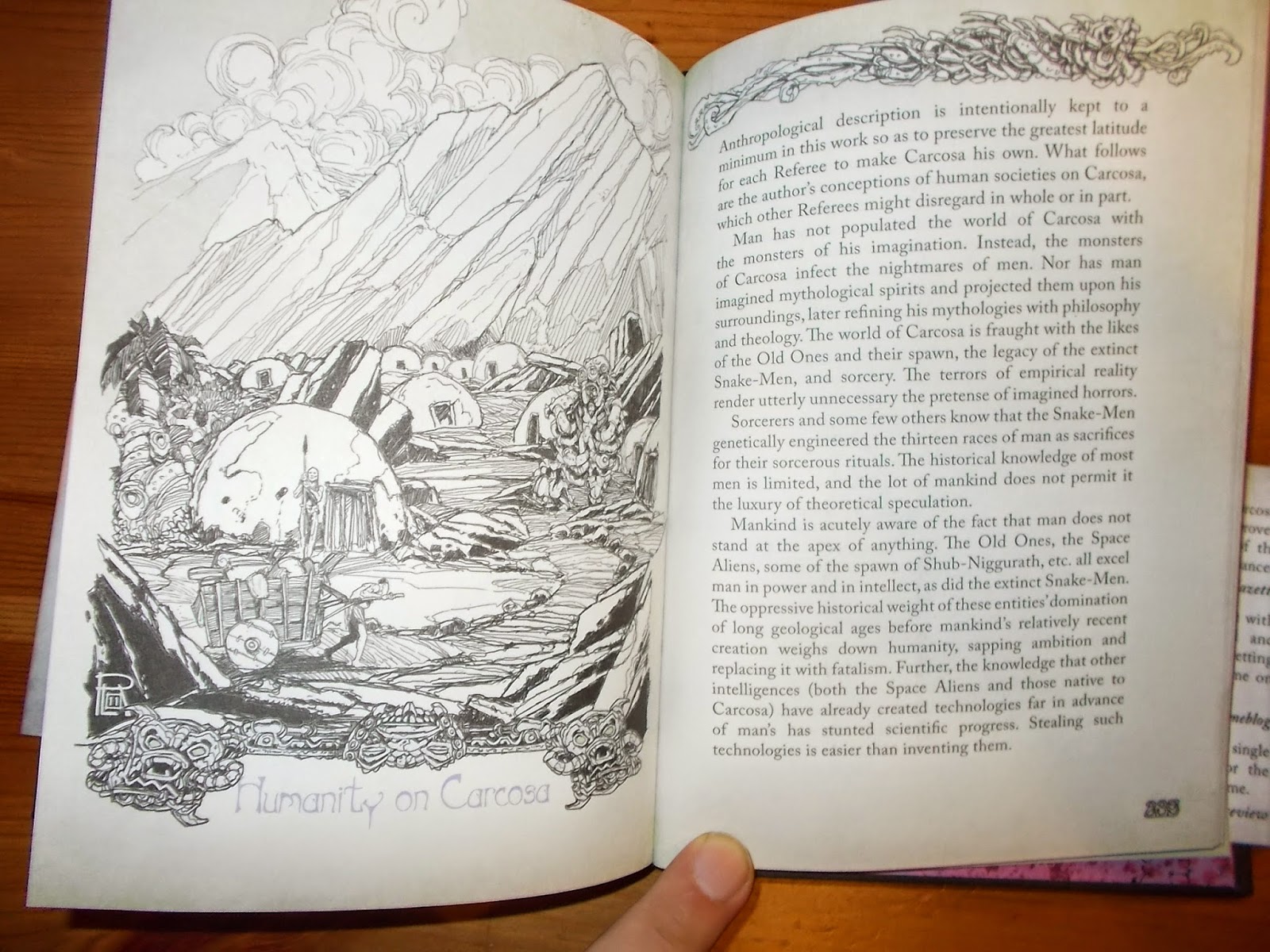 Every hex on the map is detailed individually, and the locations aren’t just “Several trees and a ruin” in the manner of older maps, but rather details of how many creatures or people are in the area, their leader, their motivations and other things that would be of use to a GM trying to make something of it.  It’s not detailed enough to make a whole encounter out of the notes given for each hex, but for any GM with a reasonable imagination, it’s enough of a world to make any number of players lives very very miserable... 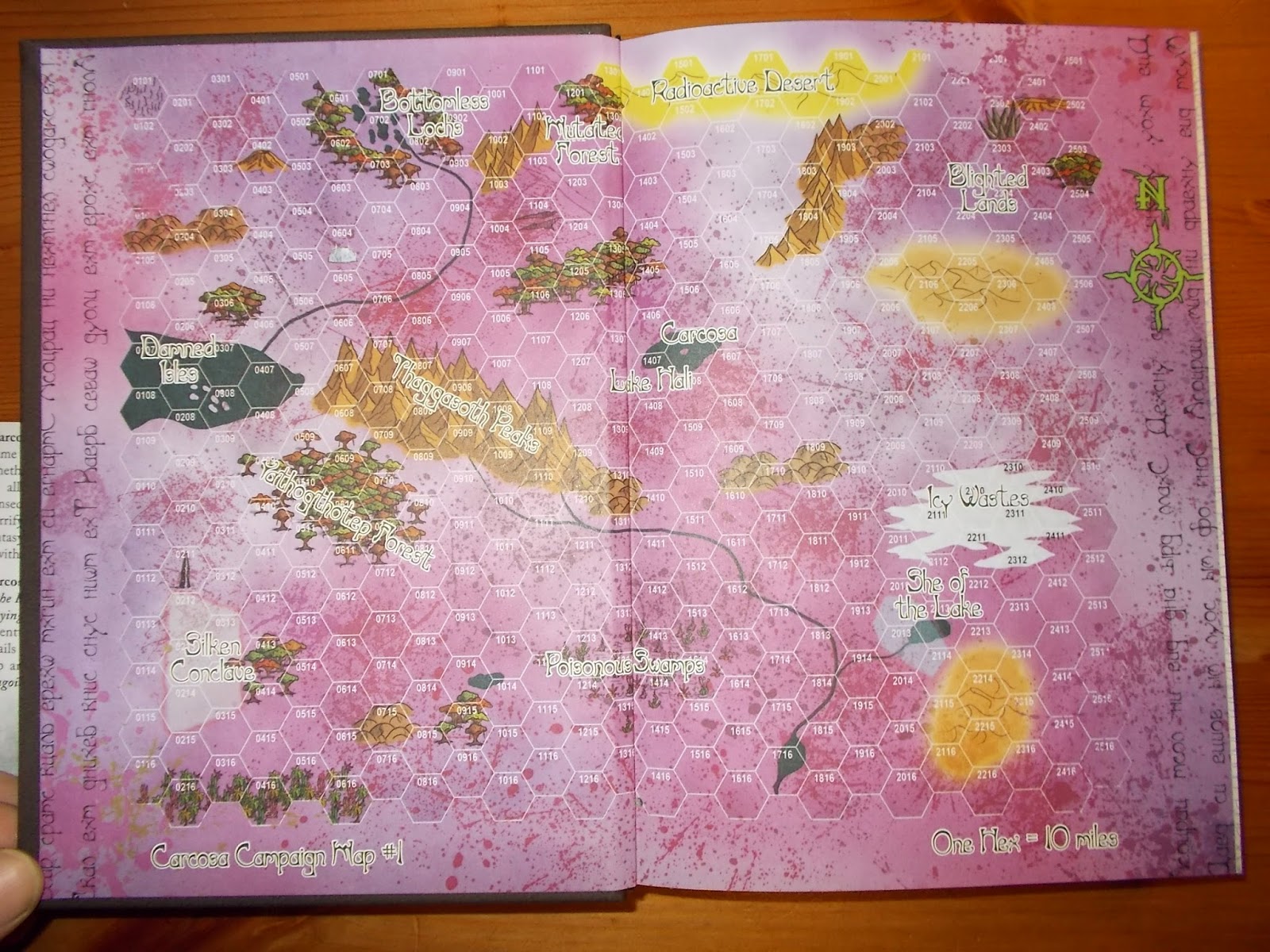 That in itself would be an interesting thing to start with, but there are very few world settings out there where there is a distinct lack of things that are “Good” (I.E. not working towards the greater good), and while this world has a whole lot of hopeless in it, sometimes it’s in hell that the heroes learn to make the greatest difference.

There are, of course, stats for all the creatures, including the gods and those that are so far beyond the players reach as to be the stars above, and while I agree that technically everything can be killed, it seems incongruous that the world has so little hope and yet offers the possibility that such things are vulnerable in some way.

Either way, this is an excellent resource, both for those who play Lovecraftian games and those who are just looking for a little more dark in their daylight, it’s not readily available in print, but the PDF is available on drivethru.