Player versus Player without Pixels....Lost Worlds 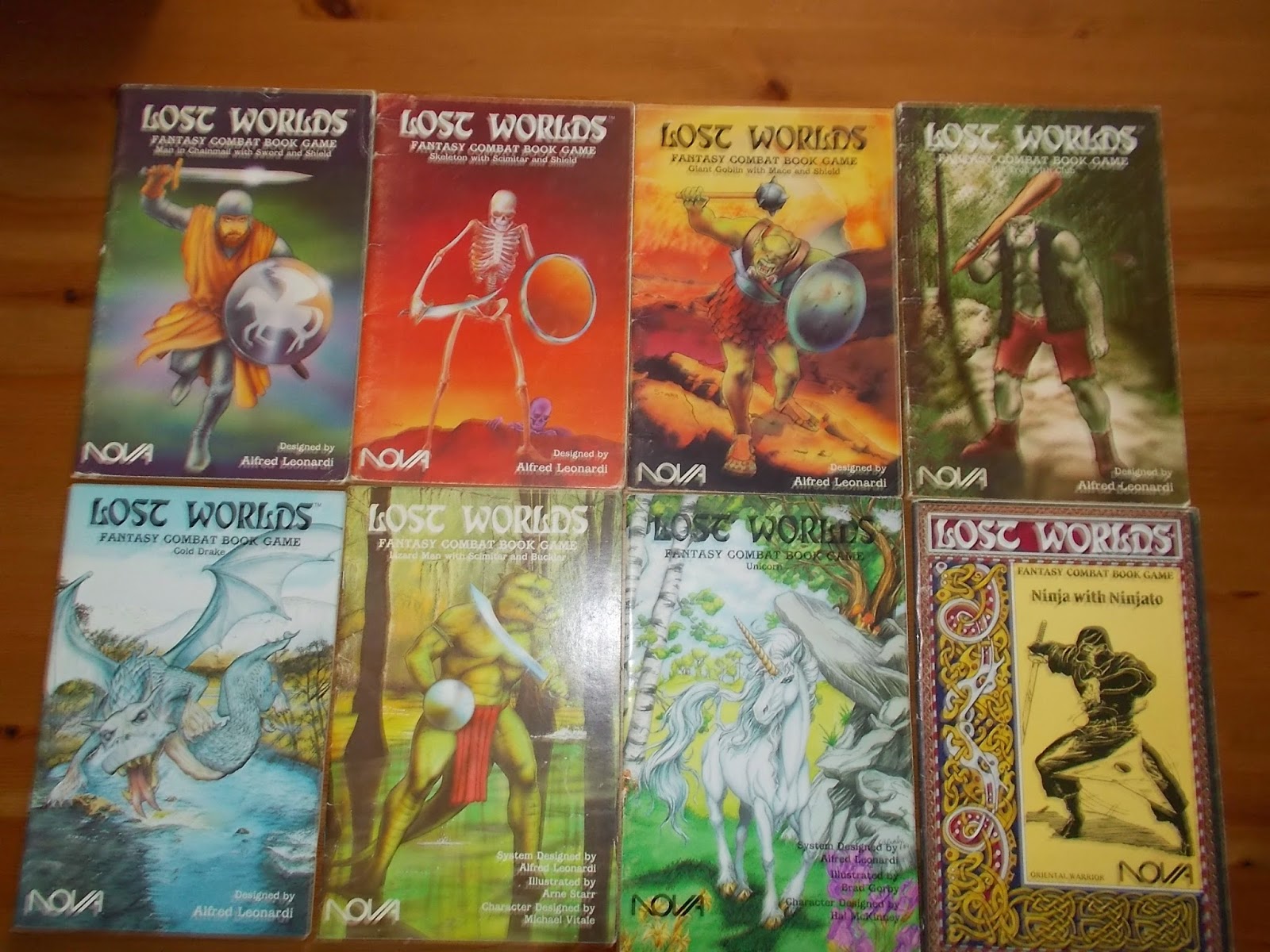 In the days when the nearest thing to a console was the ZX Spectrum, and RPG’s were all in black and white because the very concept of full colour was something that only people with more money than sense could consider. There was still a need for games that pitted one player against the other in single combat, and there were a few games that catered for this particular need.  Today we’re taking a look at two of them, the first of which is Lost Worlds. 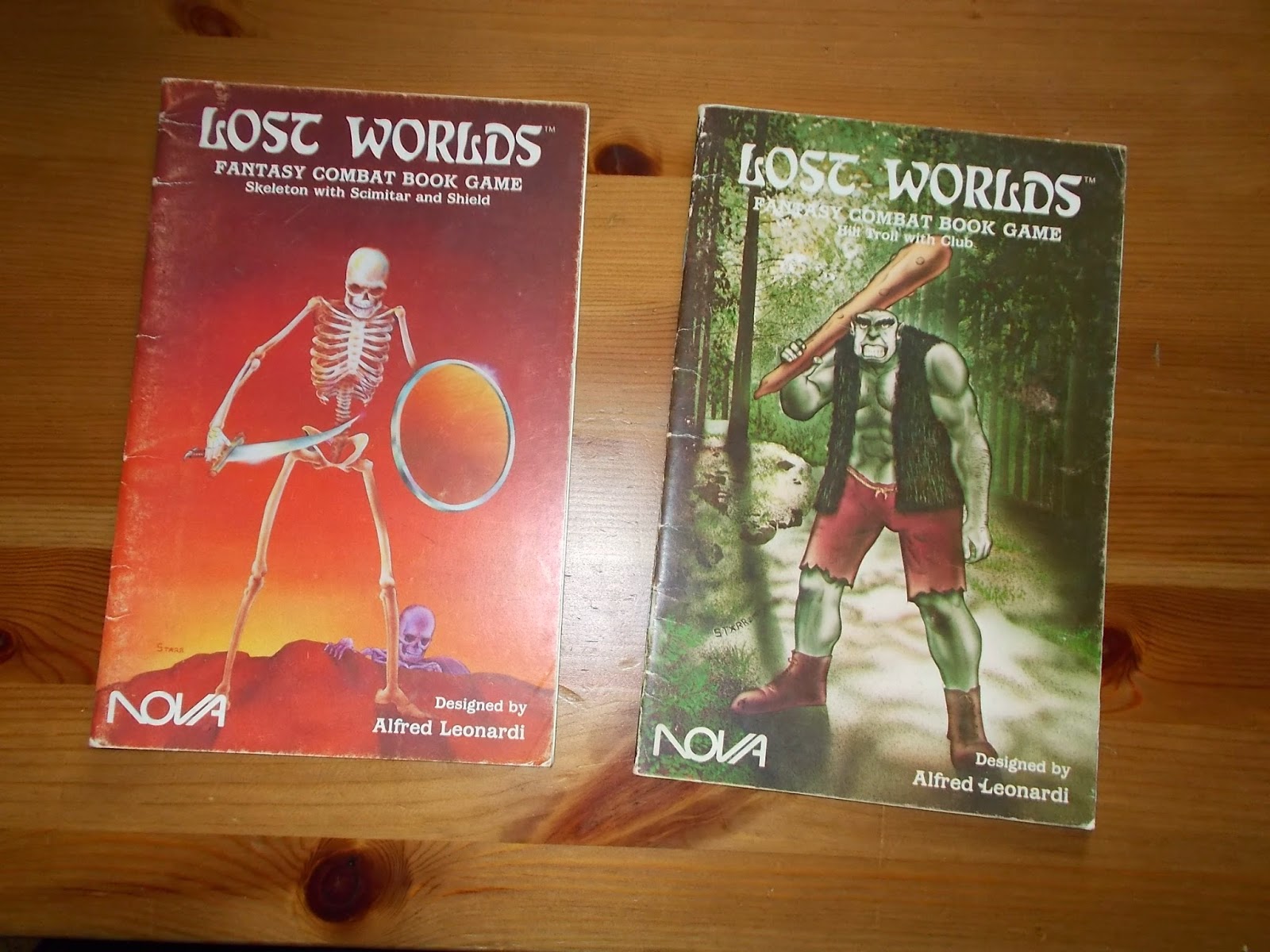 In lost worlds, you needed two books, one for each of the fighters that was going to be doing the battling, each book had a moves card in it that you kept, the book you gave to your opponent.  The rationale on it was simple, no dice, you picked the move that you wanted to and your opponent picked the move they wanted to.  You both announced and you cross referenced your move with your opponents on the table at the bottom, turning to the relevant page to see what happened. 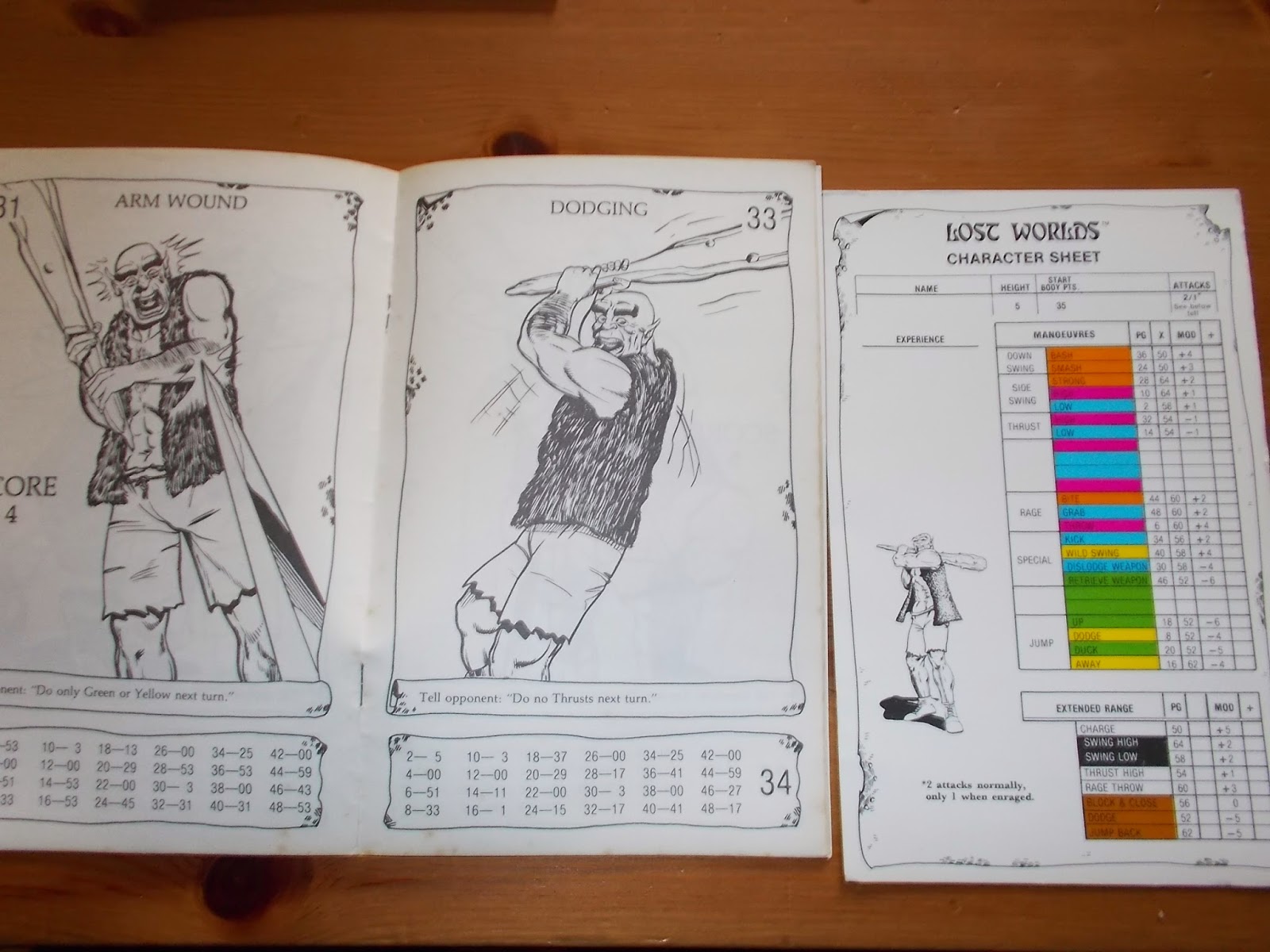 The joy of this was that each of the pages was accompanied by an image that showed you what your opponent was doing (usually with an expression of pain as you smacked them somewhere). The larger, more powerful creatures had a larger damage modifier, so it was possible to do damage even when the damage scored was in the negative figures, but with these larger damage modifiers came a reduced number of moves that they could do as they usually relied on a few moves to do the hitting. 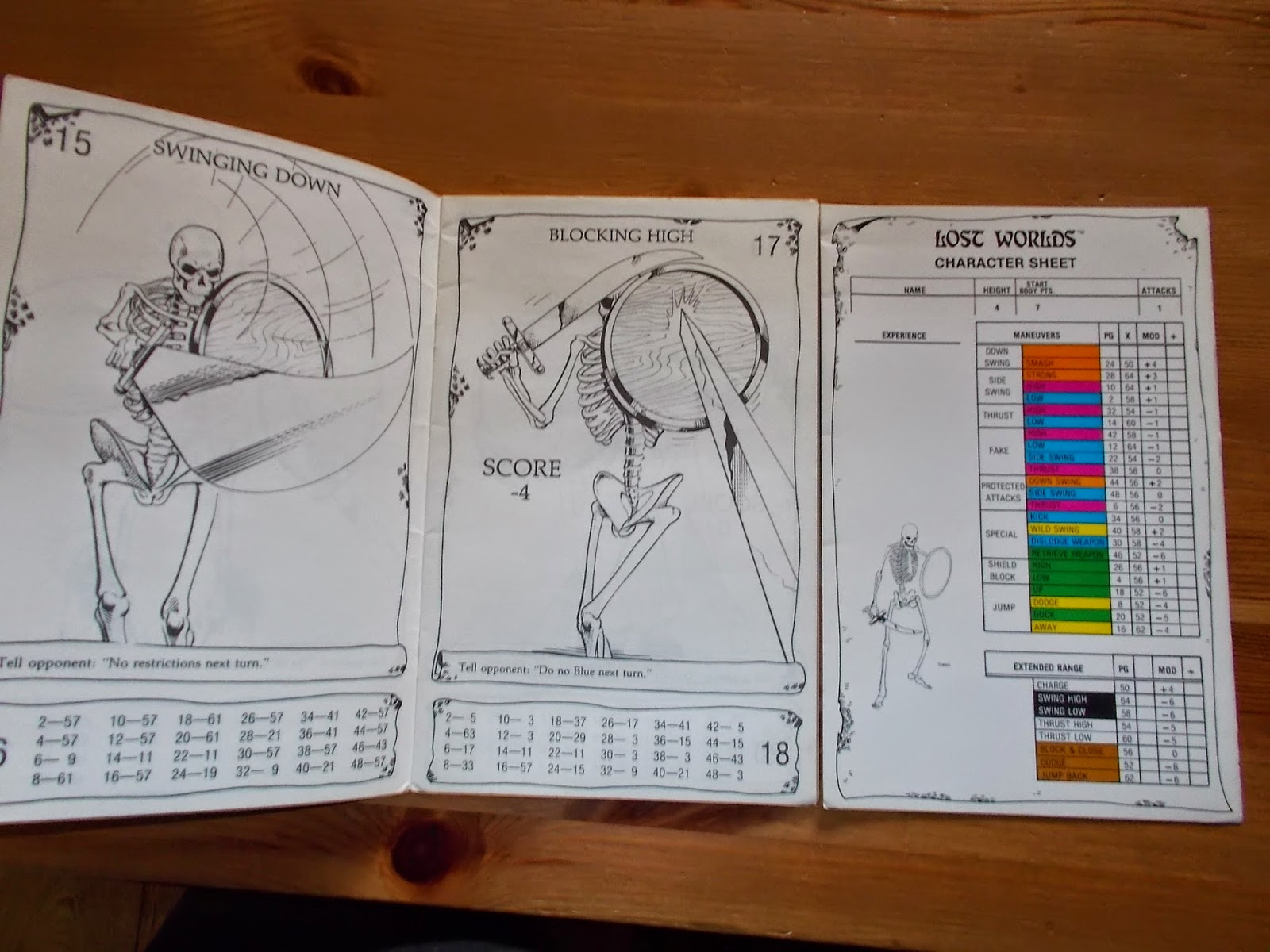 Sometimes a move results in restricted moves for your opponent or yourself, these were listed as colour coded moves, so do only green or yellow meant that you were restricted to jumping and avoiding moves for the next round till you got back on your feet.  It was possible to disarm people, move to extended range so that you could bring larger weapons (or breath weapons and spells) into play, and there were rules for improving characters after a number of fights, you could increase the modifiers on particular attacks, improve your hits points and so on. 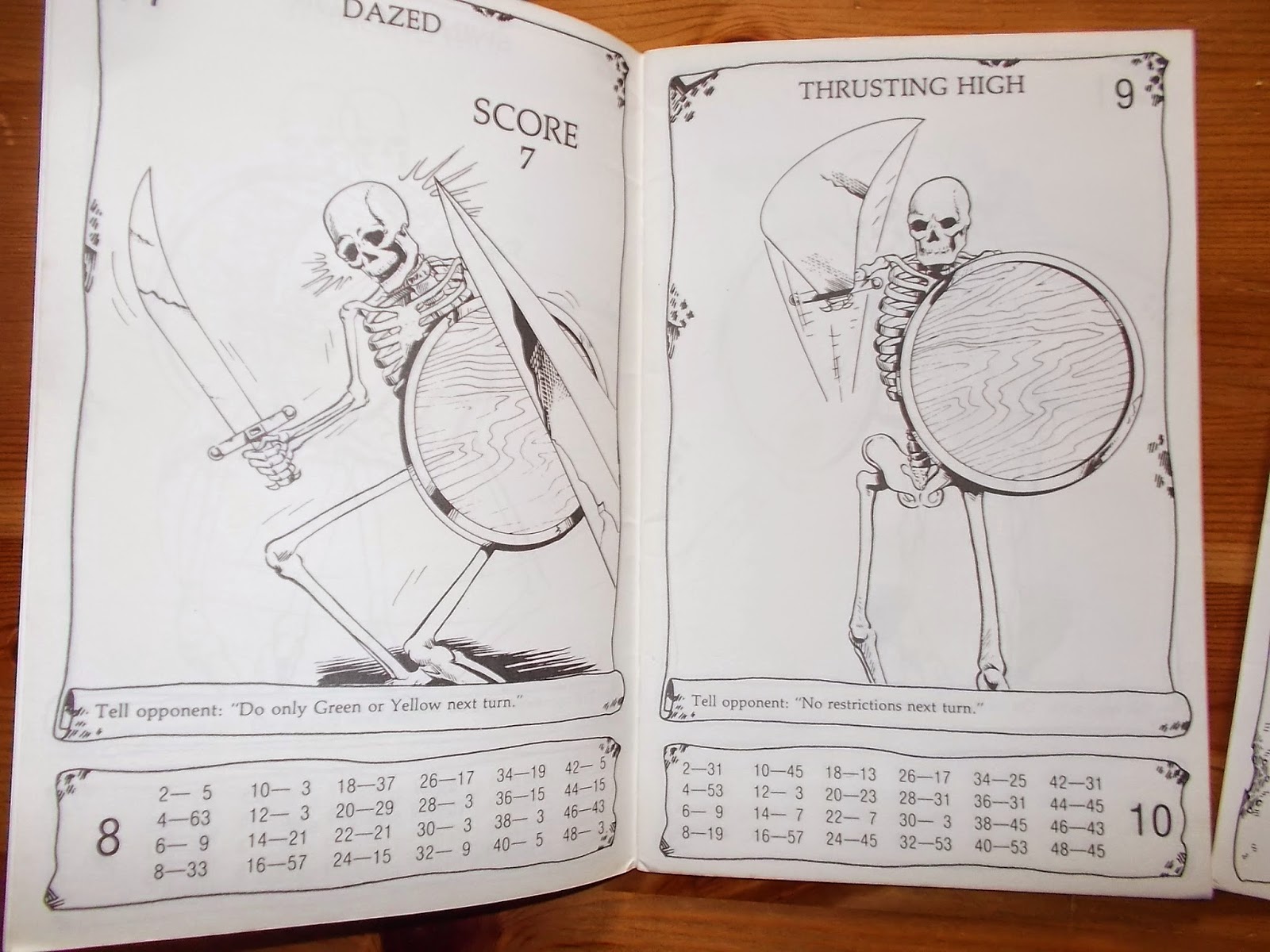 There were a number of different books, ranging from the Fighter wearing chainmail to the Hill Troll with Club and all different types.  Learning the game took less than a minute and playing it took less than five, the variance in the different opponents was the primary problem, as it wasn’t widely released for the most part and while it was since re-released, the short nature of the game and the rise of games like street fighter took away a lot of interest for people.

However, for those who knew it, it was an interesting game and remains a firm favourite for bringing out at conventions and having impromptu throwdowns...