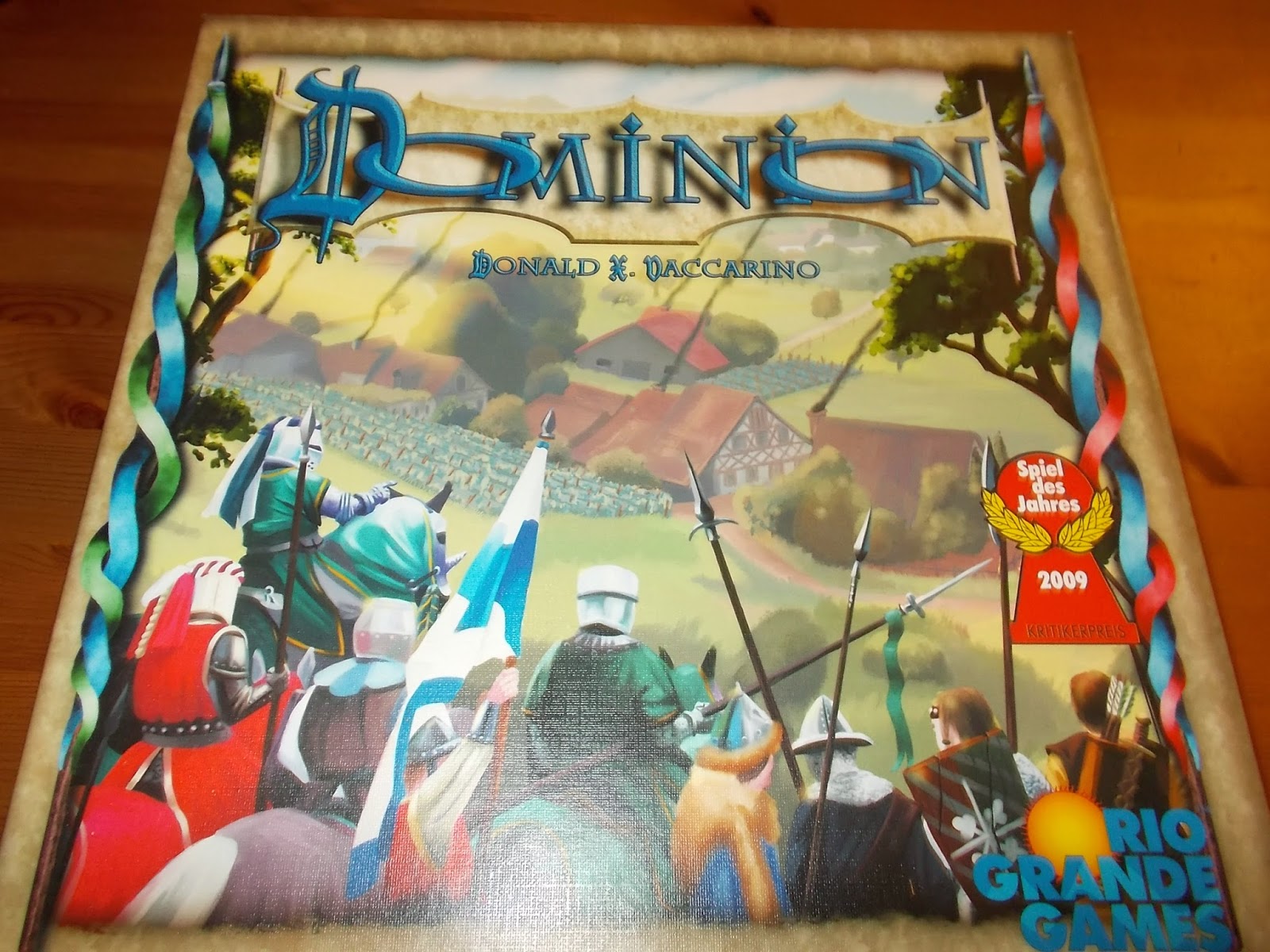 So last night we had two different games to try out, the first being Elder Sign, which set us up for bad moods all over, which meant that Dominion had a whole of bad blood to get over to win us for the night.

Billed as a Deck building game, we were a little curious at the rules as they were presented as most of us are Magic the Gathering Veterans of some years experience, so to us, a Deck Building game is one where you build a deck and then go out there and beat people with it.  There were certainly enough cards in the set to enable us to go out there and build decks, but then we read the rules and a little confusion set in.

“So you throw your whole hand away every turn...?”

Was the thing we didn’t get around immediately, the whole point behind most card games is to have a hand full of cards that will prove useful and then hold on to those till you can make use of them, how are you supposed to do that when the game has you throwing the cards away every turn. 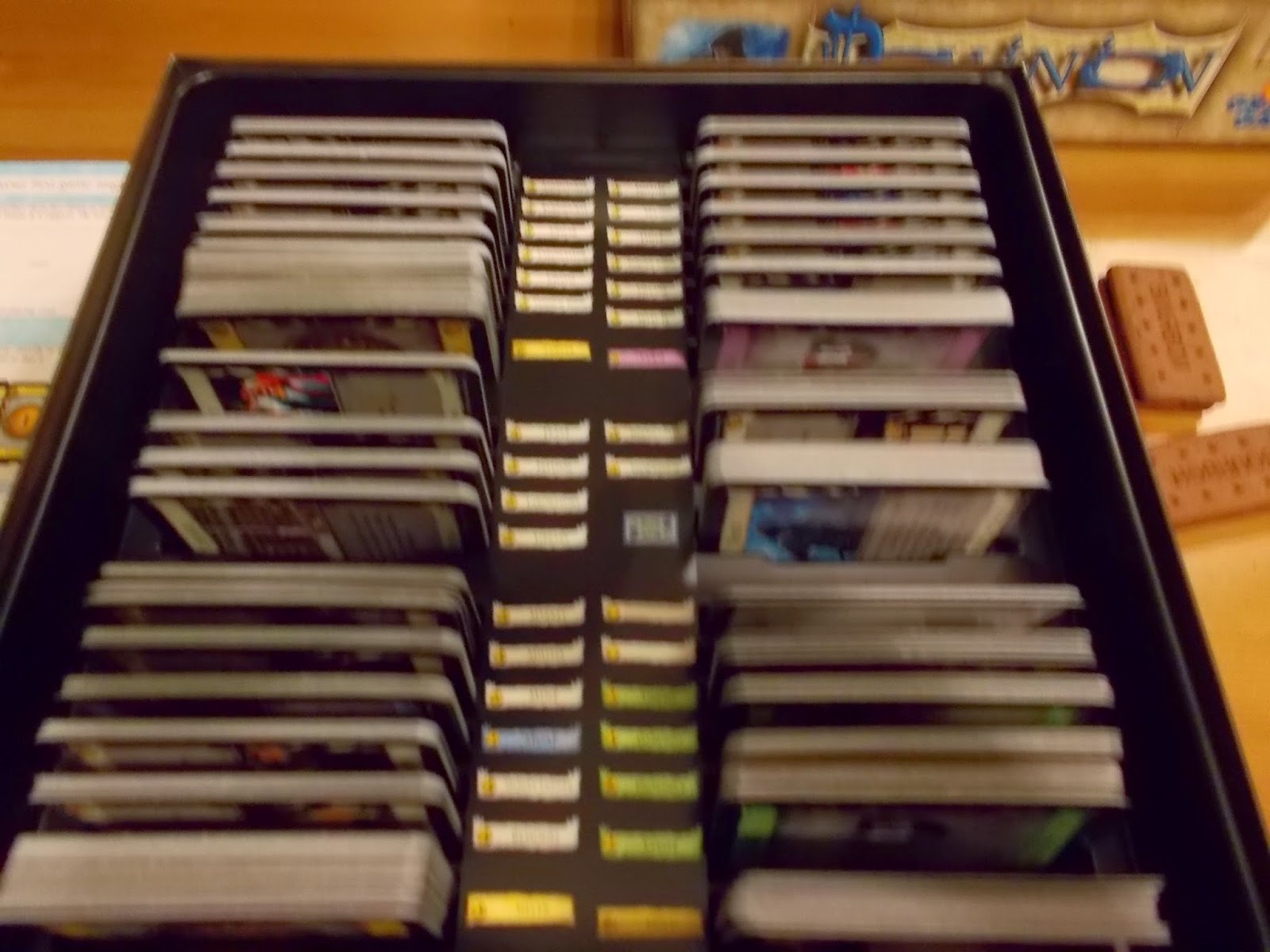 So we started playing to see if it made more sense when you were looking at it in real time...

Curiously enough, it did...

The premise behind Dominion is that there are several piles of supply in the middle of the table, you start with a few coppers and you buy cards from the table that are then put in your discard pile, when you get to the bottom of your deck, you reshuffle the discard pile and start again, at which point the cards that you bought on your way through the deck the first time will then be available for you to use.

The game gives a suggestion on the cards to play the first game with and there’s a number of other cards in the deck that can be used to allow permutations of play and different strategies to be put down to make for more interesting games depending on the types of players you’ve got around the table.  Once we’d got the idea that you were buying cards to be used at a later point and that’s how it’s a deck building game, things became significantly easier to work with. 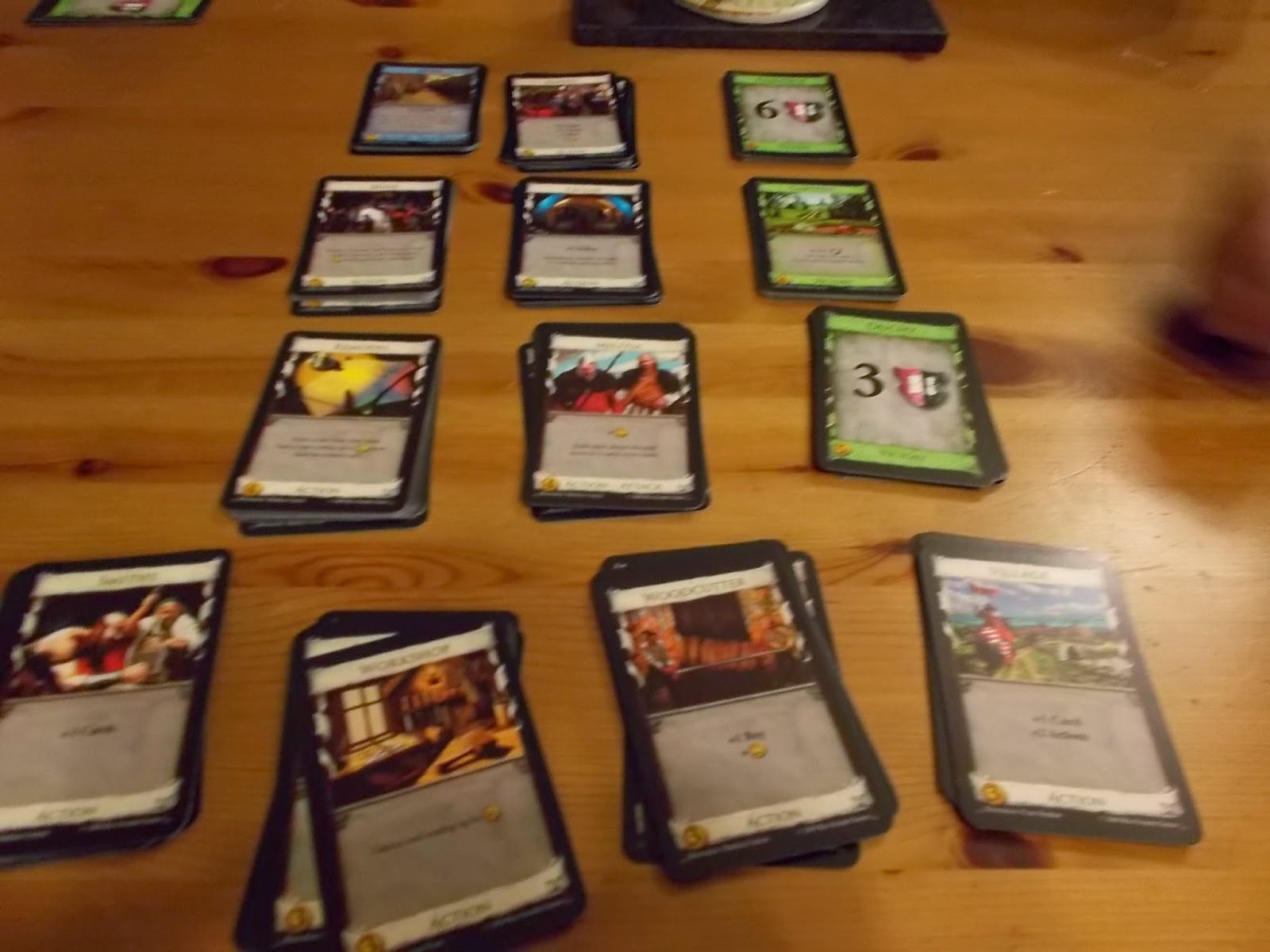 The turn sequence is simple, A, B, C.

A for Action, you play an action card from your hand, depending on which action card you play, this can set you up to play more action cards, get gold, get more buy actions, and a number of other things. You get to play one action card each turn unless you can get more actions by playing that one card, we had combinations late in the game where we were playing seven and eight action cards in a turn because of the combinations of cards that were coming up. 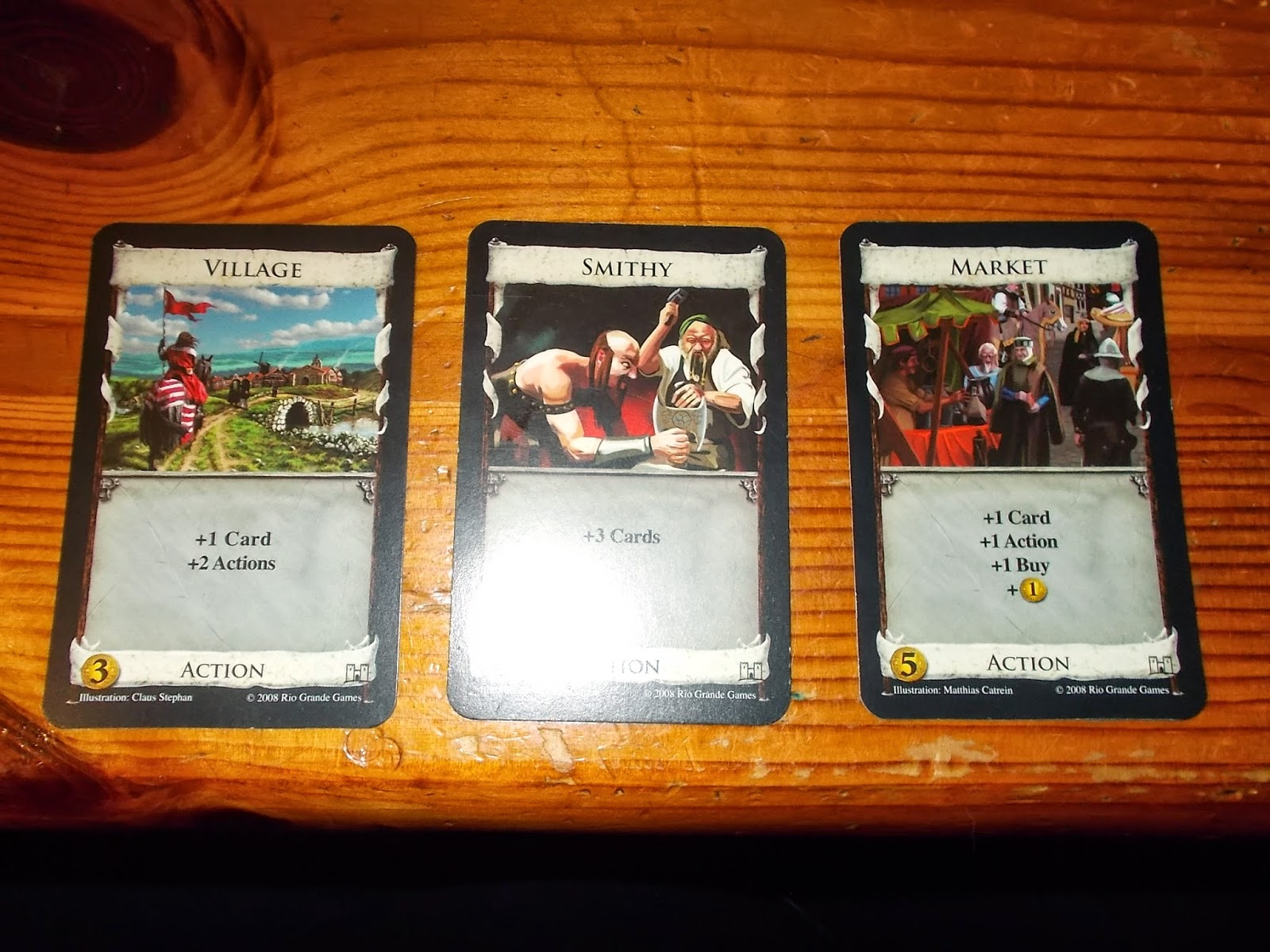 Once the Action has been played 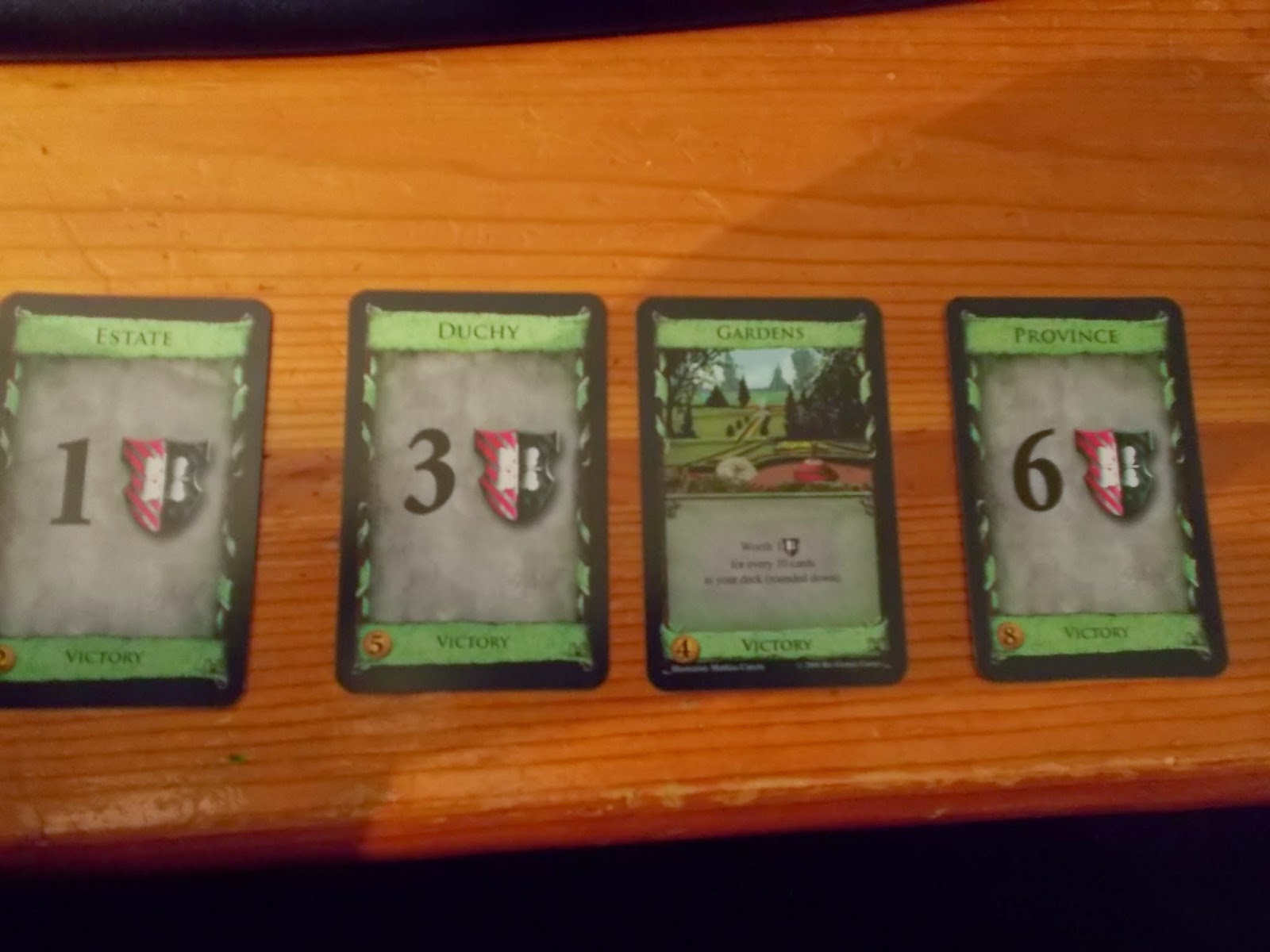 Play continues till you’ve got to the bottom of the province cards pile (high scoring cards) or you’ve exhausted three supply piles on the table, at which point all players count up the score they’ve got from their decks and the highest point score wins.

It’s a deceptively simple game, plays very well (you can see why it got game of the year), and can be learned in very little time (less if you’re not used to other card games), we liked it a lot and will be playing it again a few times before deciding whether or not it’s worth putting out the extra money for the large number of expansions that are available for the game.
Posted by John Dodd at 15:05