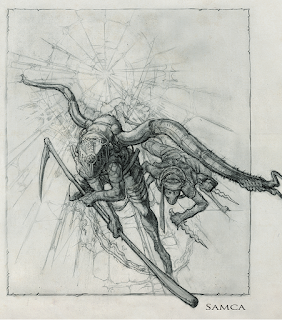 We’ve had some assistance offered from the Revelations, they’ve offered their entire core of Paladins for the duration of the virus, and our higher ups have taken them at their word.  They’ll be working mostly the poor quarter and ensuring that we get reliable intel without having to risk any of our people roaming in the streets.

And that brings me to the other problem we’re going to have.  They report to this station and they’ll be coming back in at the end of every shift to give us the details of what they have.  You all know that the Revelations have a god given immunity to diseases of all sorts and that includes this one, but if I’ve learned one thing in all my time dealing with people who are immune to something, it’s that they take that immunity for granted, so the chance of them following proper protocol and cleaning themselves up before coming back here is hovering around zero.  Most Paladins I know are dirty buggers at best, too busy dealing with injustice to wonder about the niceties like cleaning up after themselves, they figure they prove their worth with the amount of evil they’ve been wading in.

In summary, they’re immune, we’re not, so when they come in, we’re going to be waiting with the scouring team around the back.  They’re not going to like it, but I’ll be happier if they debrief when we’ve cleaned all the injustice off them.  I’m going to be drawing up a roster for who’s on hose duty each day, and if any of the Paladins get narky about it, you come and get me and I’ll minister to them about it.

In other news, we’ve got a convoy of Samca coming in from the east after Mit Tarmin closed all the bars between here and Desel, I don’t care how many arms they’ve got, they’re the best bartenders in the world and they get the same rights and safety that everyone else does.

That’s it for the morning, insects and injustice for everyone, just remember…

Let’s be careful out there…