So having finished with Expo for the moment (and nearly recovered), it’s time to look at the conventions that are coming up in the near future.  Some new, some old, and some…Digital…

For me, the things about most conventions is making sure that those giving their time for the convention are suitable rewarded for their efforts, and in some cases, the organisers of the conventions don’t see eye to eye with me on that.

So I don’t promote them…

That said, coming up shortly are the following conventions, each one of which is looking for a variety of helpers and the rewards are all agreed.  Those already on my convention notification list will be getting this separately, but if there are any questions, please ask.

Online convention running on the 29th of October, there’s hundreds of people interested in it and they’re about to put the announcement on their new website.  As it is, you can find more details about them at https://www.facebook.com/BrigadeCon/?fref=ts&em=1  and they’ll be putting joining instructions up shortly.

Now in its third year and getting a very strong following, they’re looking for RPG’s and Demo games and are offering free entrance to the con in return for a single slot of volunteering.  Located in Newport, Wales and running on the 17th of September this year for one day only. They’re distinctive from many conventions in that the entire profits of the convention are sent directly to charity and even with that, they’ve managed to grow the event for each of the years they’ve been running.  Their main website is at http://allis020.wix.com/dragondaze and they can be found on the facebook group at https://www.facebook.com/DragondazeCon/

The major gaming convention for London, this year in a brand new venue and running on the 3rd of December 2016 for one day only.  We’re needing RPG GM’s, Tournament umpires, and playtest teams as there’s a lot of things going on in the new place and we need more volunteers than we ever have before.  Running a single slot of games or demos will get you entry and we’re running from early in the morning till late in the evening with a variety of live games, RPG’s, huge board games, and other special events to be announced.  The main website is at http://www.dragonmeet.co.uk/ and the facebook group is at https://www.facebook.com/dragonmeetconvention/ 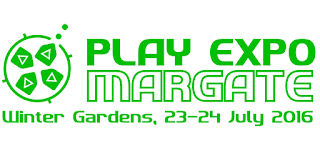 In its second year, Play Expo Margate is primarily a retro games convention, but they’re looking to expand their repertoire into RPG’s and board games.  Held on the 23rd and 24th of July in the Winter Gardens at Margate, they’ll be looking for GM’s and Board game teams to assist them bringing the fun to the show.  Free entrance in return for five hours of games being run and they can be found at http://playmargate.com/  Their facebook page is https://www.facebook.com/events/610304849108125/

A new convention backed by MCM comic con, starting with a four day run between 25th August and 28th of August at the International Centre in Telford.  Primarily covering CCG and other collectible games, they’re also looking to expand the number of other games that they can offer, their present schedule of games can be found at http://strategygamecon.com/events/events-programme/  They’re looking for RPGs and Board/Miniature tournaments and are offering free entrance for 24 players hours (4 hours, 6 players) for RPGs and Accommodation with breakfast for 120 player hours (five slots of 4 hours, 6 players), but they are looking for more commercial RPGs (I.e. ones that will sell out) rather than homebrew offerings.  Tournament offerings will be judged on a case by case basis, but they will offer free entrance to anyone volunteering a tournament of 20 or more players.  Their main website is located at http://strategygamecon.com/ and information on upcoming events can be found on https://www.facebook.com/strategyshowuk/

Now in its third year and returning at the earlier date of 1st and 2nd of September this year, Wyntercon is a multi-faceted convention running at the Winter Gardens in Eastbourne.  They’re looking for RPG games and possibly demo teams, although more details on that will be forthcoming.  A very friendly event with a lot to offer to people, very family friendly and varied.  They can be found at http://www.wyntercon.com/ and keep live updates at https://www.facebook.com/wyntercon/

I do help with some (most) of these conventions, so if there are any queries, please let me know or contact the organisers directly.
Posted by John Dodd at 09:02