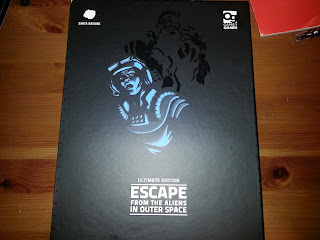 Alien is one of my favourite films.  Despite it being nearly as old as me, it remains a masterclass in the underrated art of suspense.  There have been a number of games made about it over the years, some bearing the official name, some not, but I’ve not encountered one that captured well the feel of the film.

With one of the longest names for a game ever, this is Escape from the Aliens in Outer Space – Ultimate Edition.

The first thing to note in this is that the productions values are excellent, heavy duty laminate cards with ring bound playing mats, pens and a solid box to hold them all in.  Upon opening it, there’s a well laid out box with space for the cards, maps, and pens all separate, nicely fitting together. 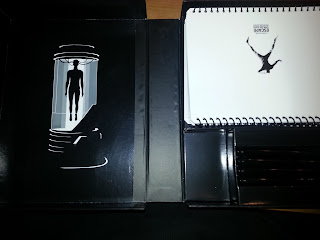 The players take one of two roles, that of the humans, or that of the aliens.  The humans are just trying to escape, the Aliens…

Well, the Aliens are just after a few good square meals…

The game sets up on one of the predesigned maps that are included with the game, everyone gets a playbook and pen to work with and starts from either the alien or human start point as befits their draw.  Each player records their move in secret and then must determine whether or not they have alerted everyone to their presence.  As can be seen on the image, the maps take the form of a variety of different shaded sectors.    Players are dealt out a human or alien card at random, so no-one knows who is who, or indeed what is what.

Each player gets one move a turn, the humans can move one square at a time, the aliens can move two, but if they are seen to move two, it gives away the game rather quickly.  After each move, if the player (human or alien) arrives on a white hex, they announce “Silent Sector”.  If they are not on a silent sector, they draw a card, which will give them one of four different rules. 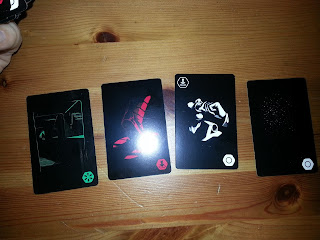 There are people out there thinking “So there’s no way to tell if someone is cheating...”

No, in the middle of the game, there isn’t, but someone doing this would only get one chance at it, because at the end of the game, everyone reveals their playbooks, and it’ll be easy to see from your own note taking if they were lying at any point. 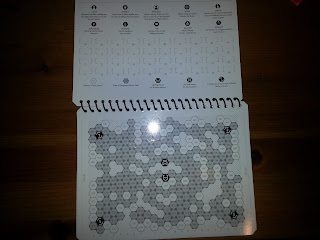 Very atmospheric, because you don’t know who or what the other players are, so when one of them announces a noise in a sector near you, you start to worry either way.  Because the point of the game is for the alien to launch an attack on a hex where they think a human is.  If an Alien makes an attack on a hex where a human (or alien for that matter) is, the player being pounced on is killed and removed from the game.  It is possible for a ship full of aliens to run around and kill each other while the humans make a break for it.

The point for the humans is to get to the escape pods, marked on the map as black hexes in the corners.  When they get to the pod, they draw an escape pod card.  If the pod is green, the human gets away safe, if the pod is red, the pod malfunctions, everyone knows that a human just tried to escape from that pod, and the hunt is on again.

The game ends when all the humans are dead or escaped (and the spread of aliens to humans is even, so people will have a good idea when the game is over), and takes five to fifty minutes to play through depending on the number of players and the maps chosen.

The advanced rules include specific roles for the players, special abilities for them to use, equipment, and mutations for the aliens to work with (including a kill turning the human into an alien…) which all add to the fun of the game.

The thing about this game, and I can’t stress it enough, is the atmosphere it generates. When you’re all sitting around the table, unsure of who is what and where everyone is, you find yourself guessing and second guessing everything on every move.  There are a bunch of resources on the main Osprey website with additional maps and content available, but you don’t need it, you can play the same map on this a thousand times and get a different game and result every time.

Brilliant game of bluff and counter bluff, imaginative gameplay and superb production values, easily one of my favourite games this year.
Posted by John Dodd at 10:17