And on a day when the world seems to be all about changing places and flipping sides, it’s not on purpose that I review a game that has that as the central premise… 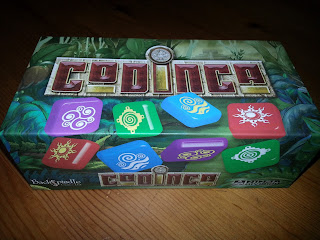 I first encountered this game back in 2014 at Expo, but there were a few problems, not least of which was the price point on the game and the use of a back board and wooden/stone pieces rather than the plastic ones used in this particular version.  I backed the kickstarter then but it didn't make it, and when I found that Backspindle had managed to produce a version that was both affordable and available, I had to get it.

Two to four players, the grid that the pieces are set up in remains the same, each player changes the position of two adjacent tiles or flips one piece from gold to white and tries to make the patterns they have been dealt. 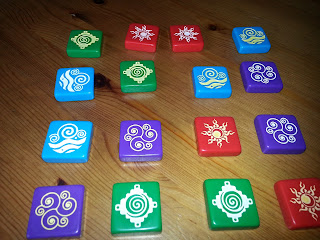 It is, and that is one of the greatest strengths on this game, it starts out on a completely level playing field, and you can play by just aiming for the formations you’re trying to make, or you can play offensively and ensure that your opponent can’t get the formations they’re after.  When there’s two players, it very often becomes a game of sabotaging the other player, as the other tiles on the board will remain unthreatening to your strategy for most of the game.

Playing the game, there’s a feel reminiscent of playing with a good set of Mah-Jongg, the pieces are of a good size and weight and it makes for a satisfying tactile element as you flip and click them around the table.  As the game goes on and people get more adept at it, it becomes a clicking frenzy as everyone waits for their turn to slap the pieces down.

The board starts like this, and every player is given a random draw of patterns (one from each of the types, Square, Corners, Diagonals, and Line) with a combination of colours for each of them. 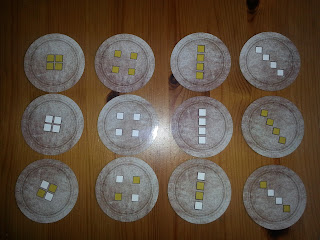 As you make each combination, you reveal the card that it matches and then put it face down on your winning pile.

But you have to be aware of what the other players are doing as well...

The reason for this is twofold, it gives your opponent the understanding of how many patterns you have left to make, but it also encourages them to remember which ones you already have made so they can try to disrupt that.  Not a game for those with goldfish memories this one. 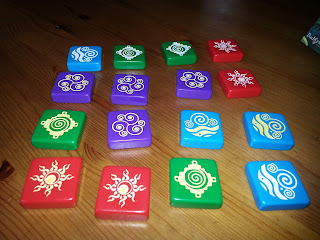 When not playing the basic version of the game, there are spirit cards that affect the entire board at once, changing the colour of every tile on the board and making a massive change to the state of the pieces.  These cards are very powerful, and used properly, can score points with a single move rather than having several turns of flipping tiles over.

The quality of the box is excellent, strong cardboard with a magnetic seal on the front, instructions in six languages, and sixteen pieces of hardened plastic that stand up to a lot of abuse. 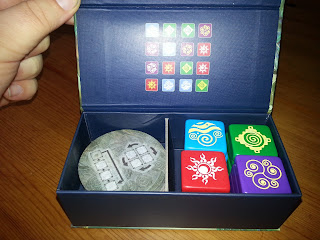 More details about this at http://www.backspindlegames.com/codinca/ but this is one of those games that you can use to introduce your non-gaming friends to the hobby, you can learn it in less than a minute, but the combinations are endless and it lends itself to all styles of play.