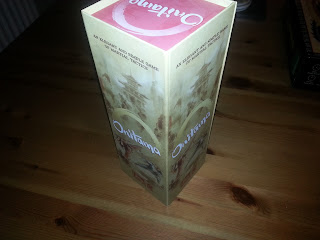 I’ve been taking a greater interest in Abstract strategy games of late.  Don’t get me wrong, I still like games where there’s a few handfuls of dice involved, but I’m finding that the game you get when random elements aren’t involved is proving far more interesting.

I like that at the end of the game, no one gets upset because they got robbed by a series of bad dice rolls, and no one argues that they would have won if…

So this is a game that I encountered at Expo, found out it was sold out, so picked up a copy afterwards, haven’t stopped playing it yet. 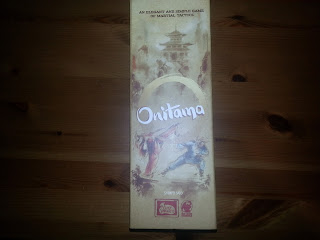 The first thing to note is the excellent production values, I’m noticing more and more as games not only have to be good to play, but also look good.  The box is about the same size as a bottle of whiskey (and costs less than a good bottle at that), has a magnetic lock to keep it sealed, and is constructed of good solid cardboard. 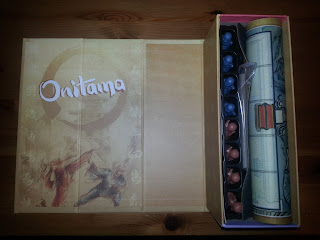 Inside is a moulded plastic insert with the eight student pawns and two master pawns, the playing board, cards, and instructions.  The board is made of similar material to high grade computer mouse mats, wipes clean without any fuss, and rolls up well to fit in the box.

The pieces aren’t the most complex constructions, but they’re appropriate for the game and capture the feel well.  The cards are almost Tarot sized, laminated front and rear, well designed with clear indications of their purpose. 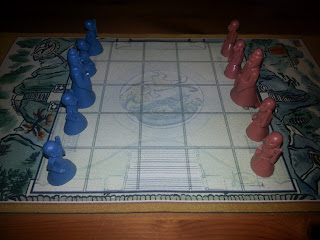 The game sets up with four student pawns and one master on each side, play begins with five cards, two for each player and one for the top of the board. 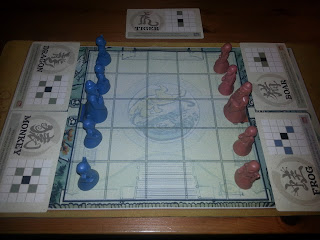 Each turn, a player makes a move from those available to them, each card has a black dot in the centre of the move list that represents their current position, and they can move to any of the greyed squares indicated.  If another piece is on the square moved to, it is removed.  When they have moved their piece, they take the card that corresponds to the move that they made and swap it with the one at the top of the board. 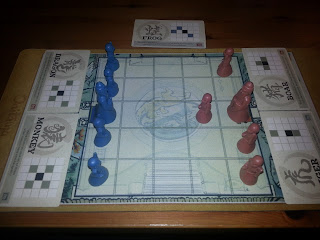 The next player moves using one of their cards, and then swaps it for the card that was originally the first players, and so on, meaning that everyone at some point will likely use every card. 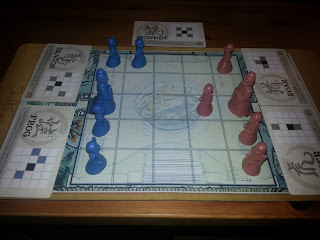 After a number of moves, the board may well end up looking like this as pieces move back and forth to try and move to a winning position. 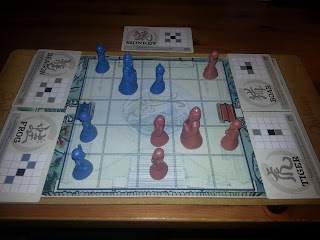 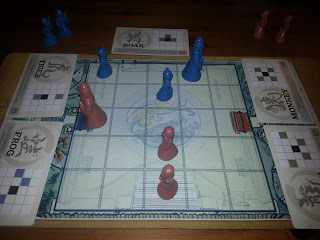 There are sixteen cards to choose from, giving a few thousand combinations to work with, and even with the same cards, all it takes is a different starting order of cards for the game to be completely different. 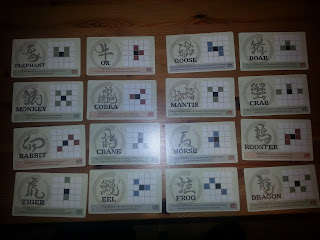 The thing is that you need to keep your mind on what you've got, what they've got, and more importantly, what they're going to get when you make your moves.  Many are the times that cards like Dragon, Tiger, and Crab are held back because of their powerful two-space moves, but then you're limiting your own movements if you don't use them, so it all becomes circular.

It's a two minute teach for a five to fifty minute game (depending on how involved you get in the strategy), and I've played it against everyone from my friends to my mother in law with surprises every time.

Easily my game of the year thus far.
Posted by John Dodd at 15:27