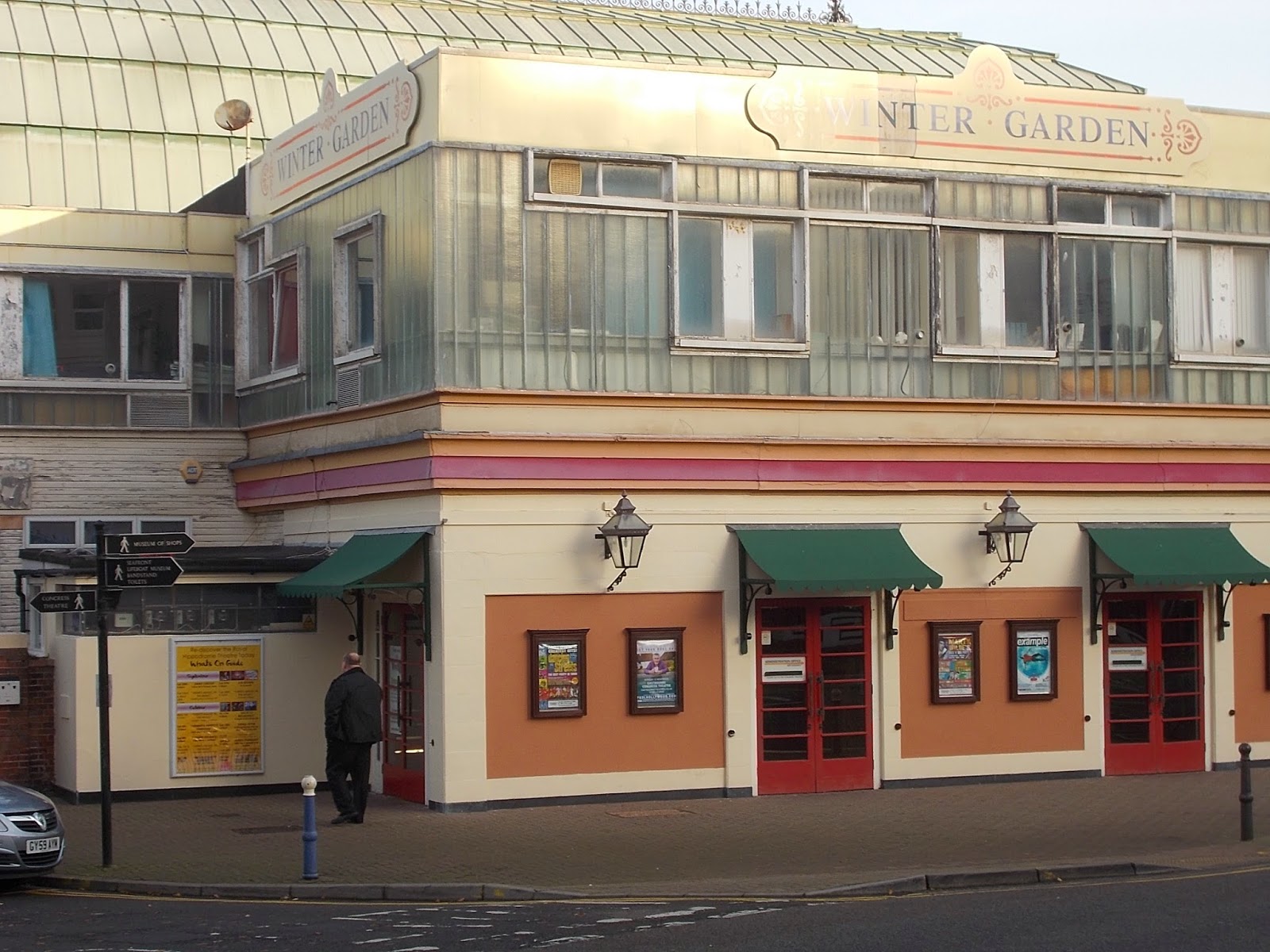 I’ve spent the last few days helping to run Wyntercon down in Eastbourne, it’s been tiring in a way that Expo isn’t, because with Expo we’ve had a number of years to get the logistics of things right, to get teams in place to deal with things, and because we’ve had that time, we’ve seen most of the problems that can occur with that particular convention.

So when it’s a whole new convention, you’re back to starting all over again.

Got down on Thursday despite the SatNav thinking that the Woolwich Ferry is a road, and caught up with Andy Kybett, the director and main organiser of the convention.  He and I have been working through things for the best part of the year, but with me being up here in Barnsley, most of the support I’ve been able to lend has been through my own knowledge of conventions and lessons learned from years of doing this sort of thing.  All the running on the ground and signing of contracts and traders has had to be done by him.  When I arrived, most of the trade halls were set up, with a few traders having not made it and the inevitable last minute cancellations that always occur when you’ve got a first year convention.  Went back to the hotel to book in and then met up with Virginia Hey and David Prowse to go to the All Saints Chapel for the VIP guest party.  I finally got to meet with Vijay Johnson, the cosplay co-ordinator at Wyntercon and a lady who leads by example with more costumes than I’d brought clothes, and it’s easy to see how she inspires people the way she does.

Amazing venue and excellent night, my team of GM’s had made it down ahead of me, with two last minute cancellations that I could do nothing about, but I had an excellent evening discussing the nature of narrative games against those using buckets of dice with other people (Frederik, Rachael, Richard, and Simon) who have the same level of passion that I do for that particular subject.  We didn’t stay up that late, all of us wanting to be ready when the following day came.

And all too soon did it come...

Friday morning and there were a whole bunch of people waiting outside when we went live, still waiting on some of the artists and one of the traders to turn up, but everyone else was in and all the guests had their tables, so to work. 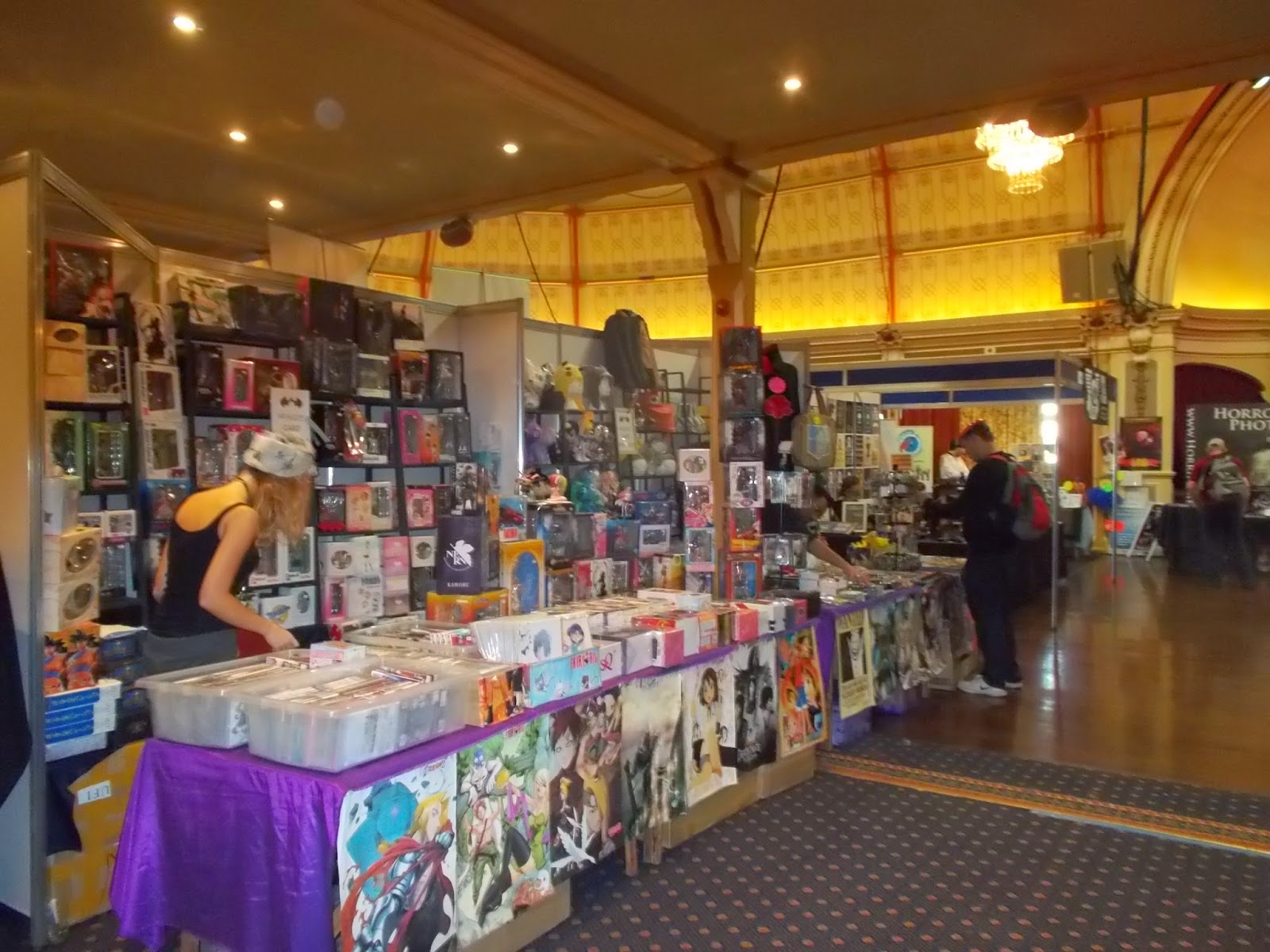 Friday’s are always an anti climax, even on days when they’re school holidays, there’s a bunch of people who’ll turn up for Fridays and they’ll have booked the day off in advance, but for most, Friday is for the Hardcore and so it was with this convention.  Good turnout with a lot of people in costume to begin with, and not just people wearing a T shirt with a skull and calling themselves the punisher, people who’d really spent a lot of time and effort on putting their outfit together.  Roleplaying on the first day was quiet, but the indefatigable Lords of War team lead by Martin Vaux were dragging people in to play games at every chance they got, never taking a break, all go, an excellent example of what demo teams should do if they want to get the sales.

Friday night was the Halloween Ball at the Atlantis nightclub, and I should point out for those that didn’t realise, but the Nightclub is at the end of the pier and the pier had all but burned down a few months ago, so even having the ball there had been a major achievement.  Most people who attended did so in full costume (to the point where I had to do a double take when Andy turned up in a dress...) and the effort made by all created a phenomenal atmosphere that made the evening a great success.


Again not too late back, for the fear that Saturday, as it is with Expo, would bring masses of people.  To be sure, it absolutely did bring masses of people, not the same scale as Expo, but more than triple what had been there the day before.  We found new problems, new quandaries, dealing with celebrity is very different from dealing with the public and when some of your stewards don’t turn up, everyone else has to run around twice as fast for twice as long, but we got through the day, there was a brilliant response from the local community with politicians (of course), press and massive number of cosplay groups and individuals turning up to support the event. 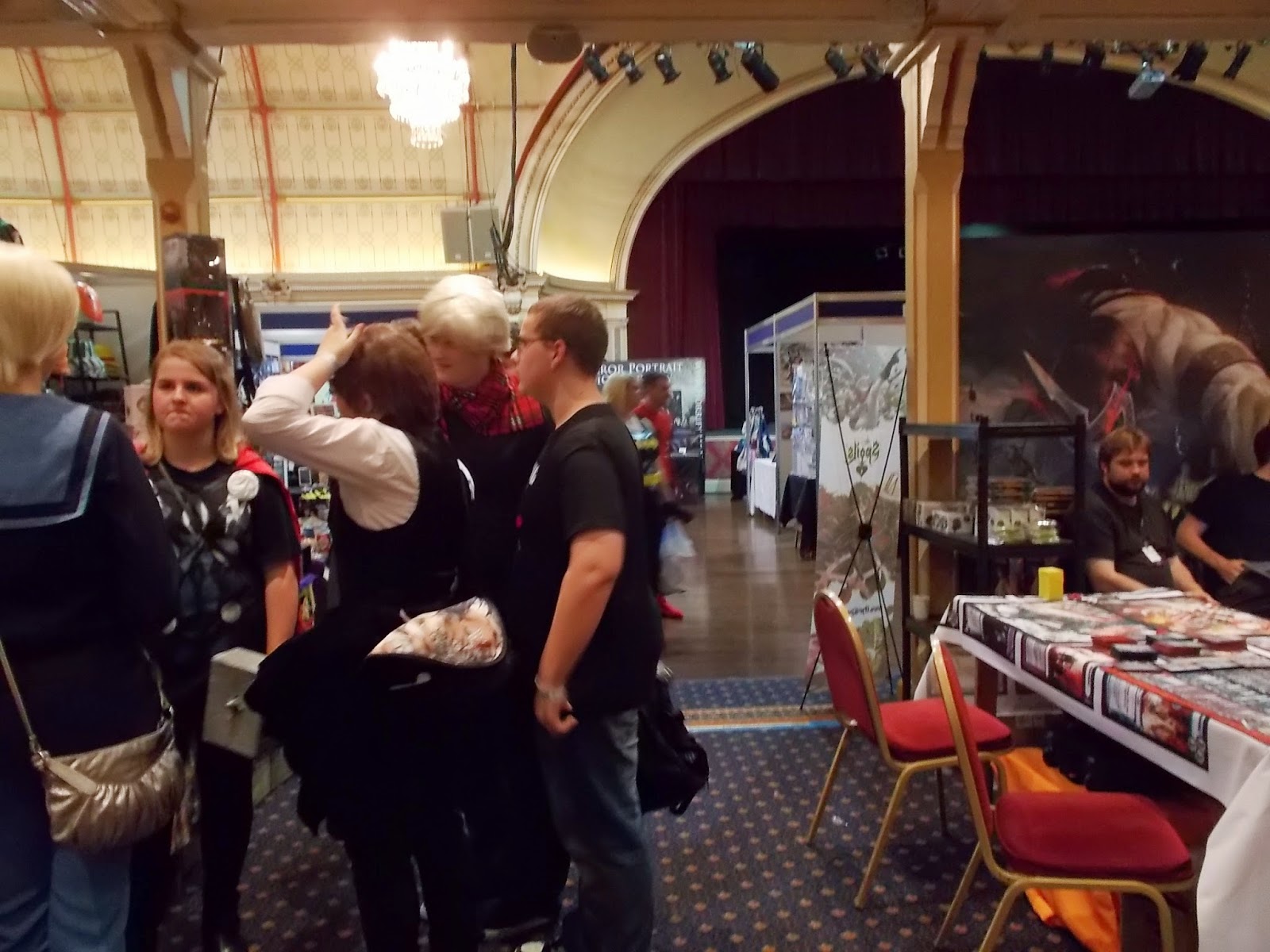 The range of traders there was massive, from cake makers (got to love zombie head cakes) to replica weapons and steampunk traders and the variety was very well received, because whatever you were looking for, you could find under a single roof. 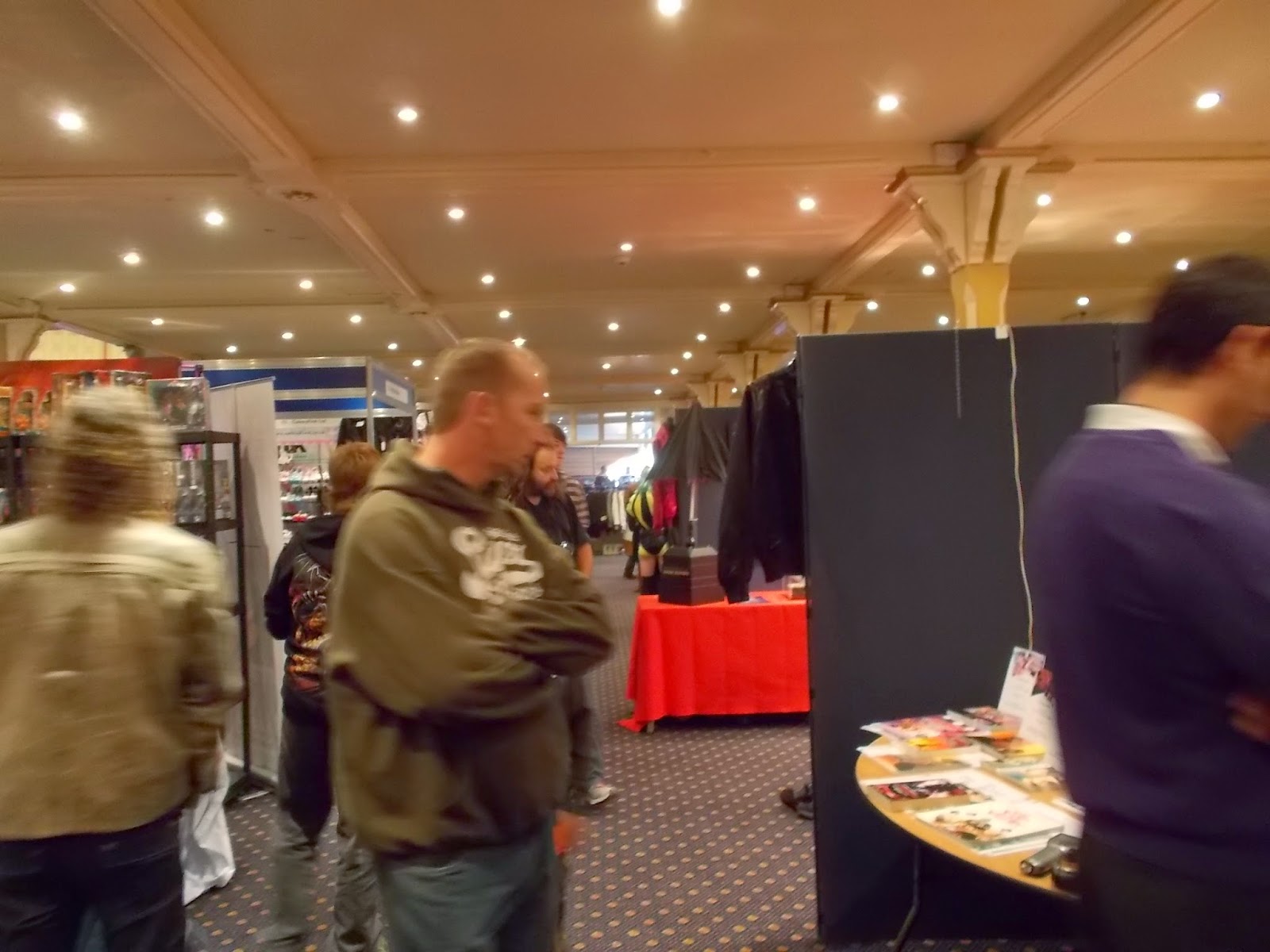 Saturday evening had another round of special events lined up in the form of the local cinema being completely taken up to screen special viewings of classic films ranging from the Dark Crystal to Bladerunner, which I didn’t take up because running around all day does take it out of you, and when it comes to being ready for things, even when it’s the last day to follow, you want to be at your best.

Sunday arrived, quieter as we’d expected, but still well attended and with everyone enjoying themselves and having an excellent time of things.  There was a cosplay competition in the afternoon and a last round up of everyone before heading out for the survivors evening meal at the local Chinese buffet, following which me and Andy met up back at his place and finally took our shoes off after three days of sprinting.

When it came to Wyntercon, these are the lessons that will be applied for next year.

1: Multiple locations for events are something that really should only be tried when the event has been running for a few years and people have got some idea of the surrounding area.  When it comes to events on certain days (Halloween night for example), keep the special events to a minimum because most people with families will be elsewhere. When you hire a venue, use all of it before you go anywhere else. Sounds like common sense, but when you’re building the first event, there’s always the temptation to build the grandest spectacle.

2: Put together groups of people you can trust and you know you can trust, when someone doesn’t turn up, have their name down on the lists and have their numbers available so you can find out where they are.  When you have traders, make sure you know who they’re bringing with them, limit the number of free passes that you give out because each one counts against your final profits, and in the case of an event like Wyntercon, it counts against the amount you give to charity when everything gets counted.

3: Have people there that you know you can delegate to, in the Roleplaying zone I couldn’t be present to manage the games in the way I am at Expo because there were too many other things that needed my attention, so I asked Rachael Hodson of the Phoenix Games Club to step into my place and she took that trust and repaid it a hundred times over, the section was run well and I’ll be looking to her to help at a number of the other events I organise because boundless enthusiasm is something that you can’t put a price on. 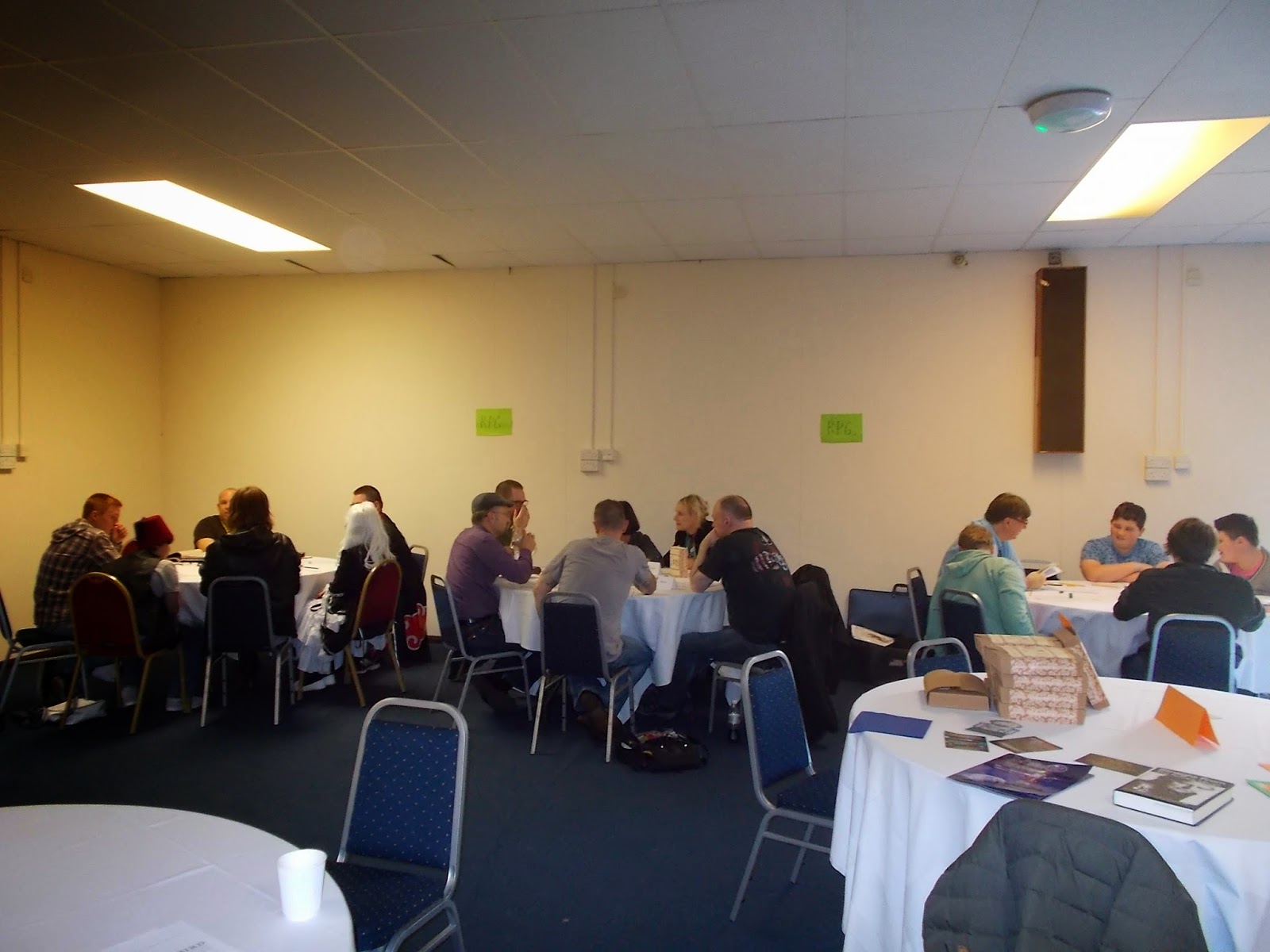 4: Have the best icecream in the world in the venue...

My personal thanks to my own team of Richard Evans, Simon Burley, Mark Perry, Frederick J Jensen (who presents the best case for narrative gaming I've seen in a while), Kevin Rolfe, and Leo Marshall, all of whom worked tirelessly to make the roleplaying section excellent, special thanks to Rachel Hodson, for putting in effort well above and beyond the call of duty to make it brilliant.

Overall we had an excellent event, and given the success of it, we’ve got chance to do something similar next year, so more details on that to follow, but for now...