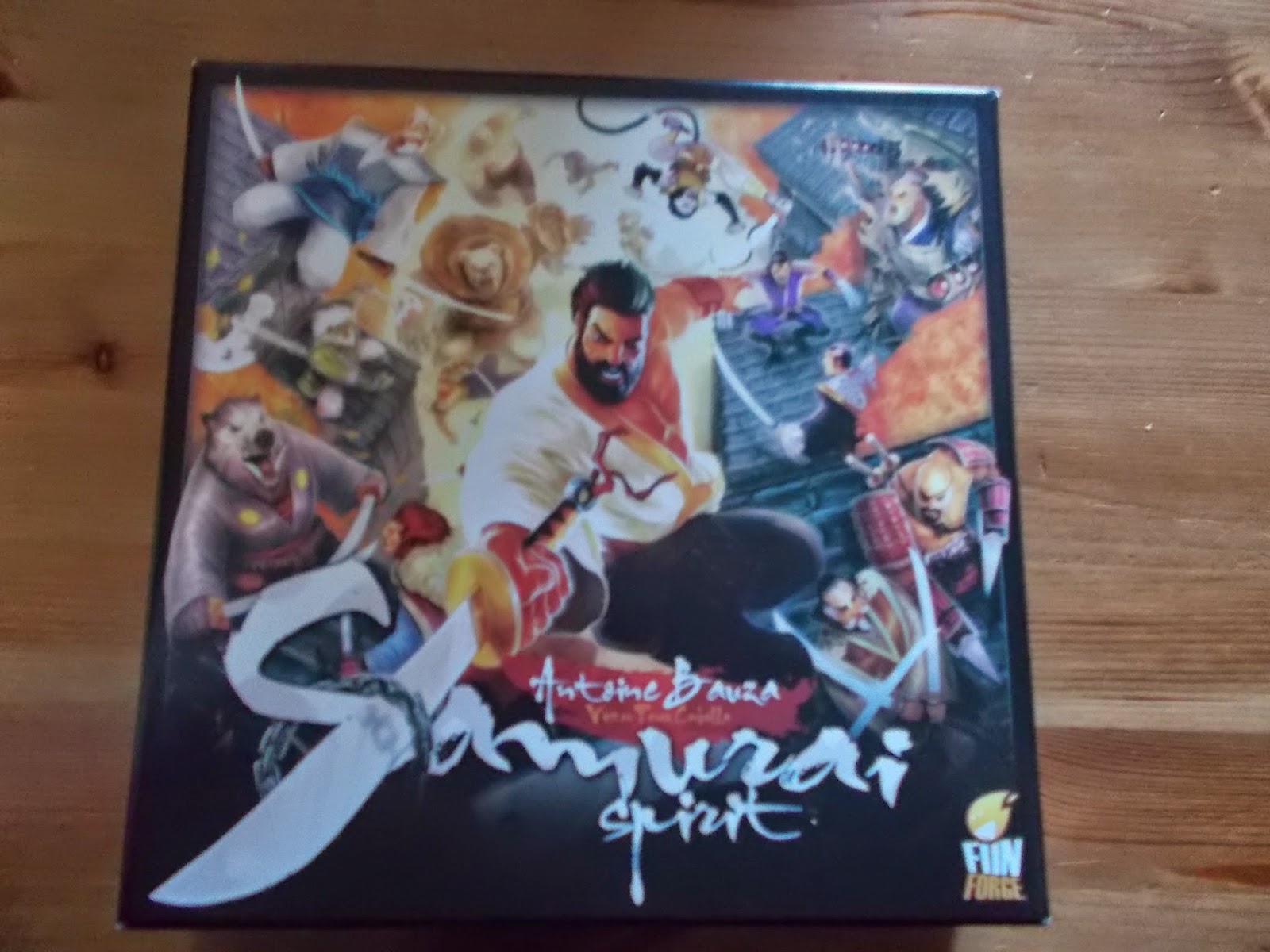 Next on the list of games from Spiel was something that struck a chord with me, I’m very fond of the Seven Samurai (both as a film and a concept), and I have a strong interest in werecreatures in general. 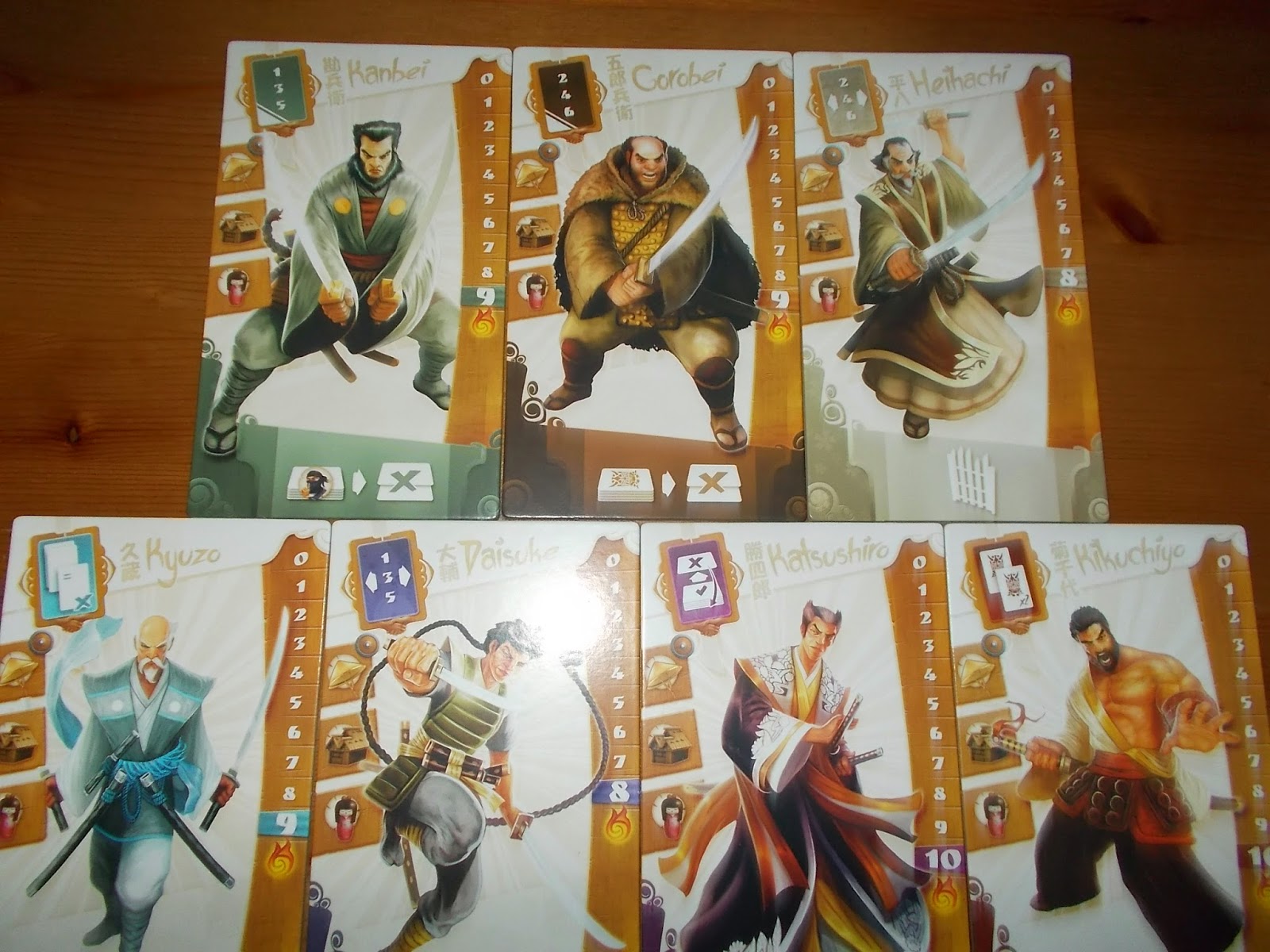 So a game that allowed you to recreate the Samurai’s defence of the Village but having all the samurai as a variety of werebeasts... 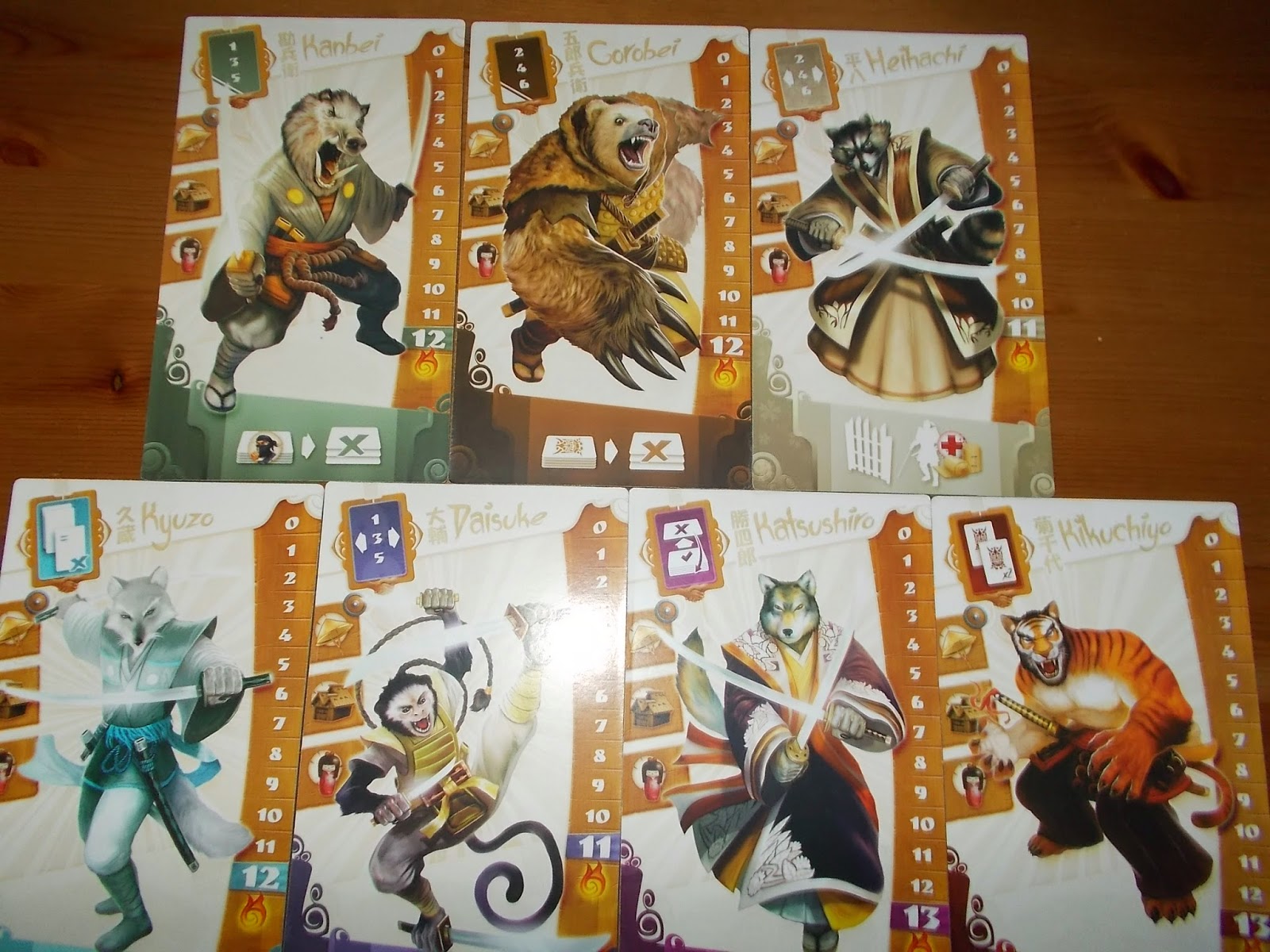 Well, there could be nothing but win involved... 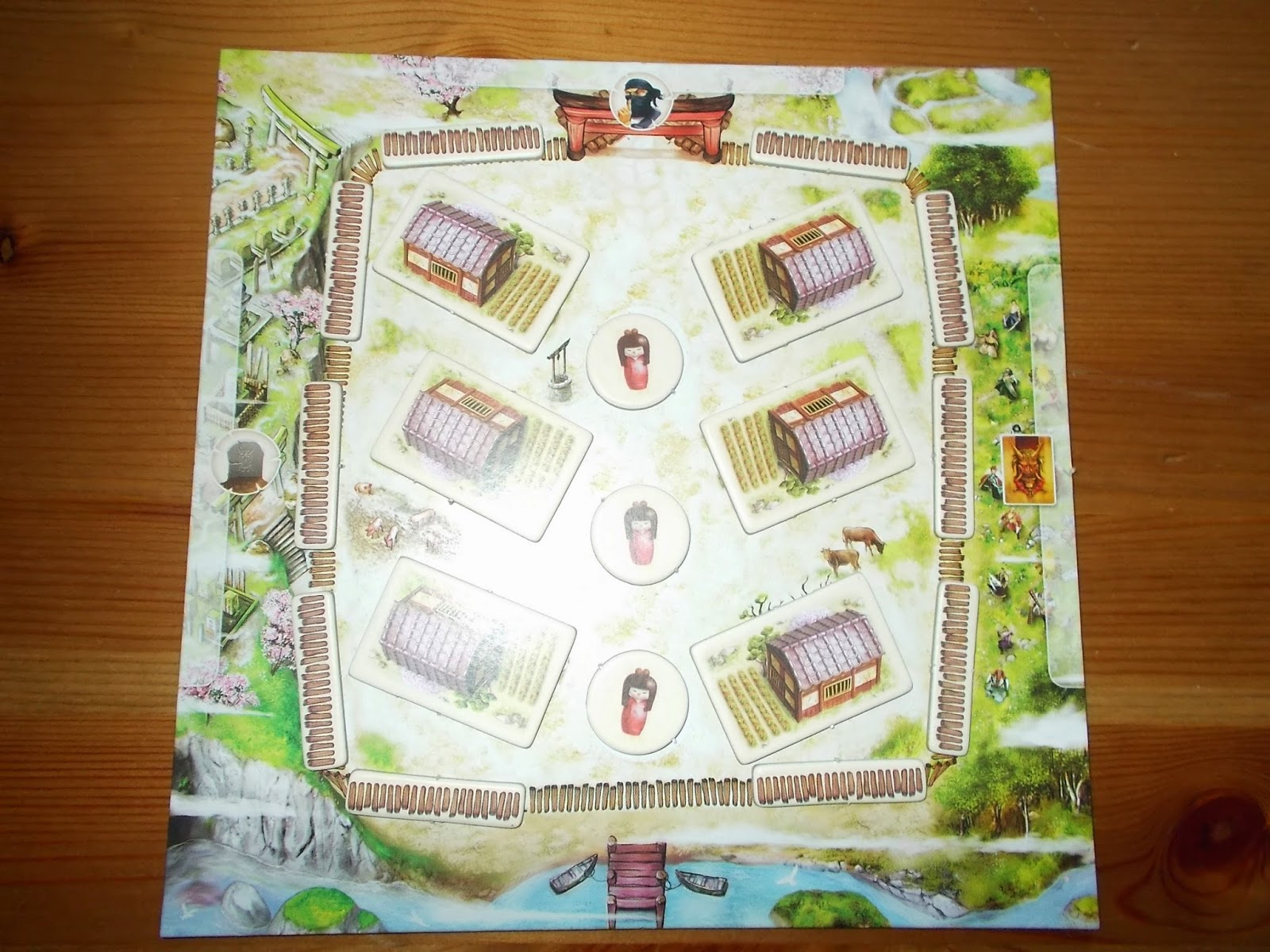 A swift word on the production values before I cover the game, it’s full colour throughout, all good solid counters, the boards for the samurai are thick card, with wooden samurai pieces to represent the health track of the samurai in question. 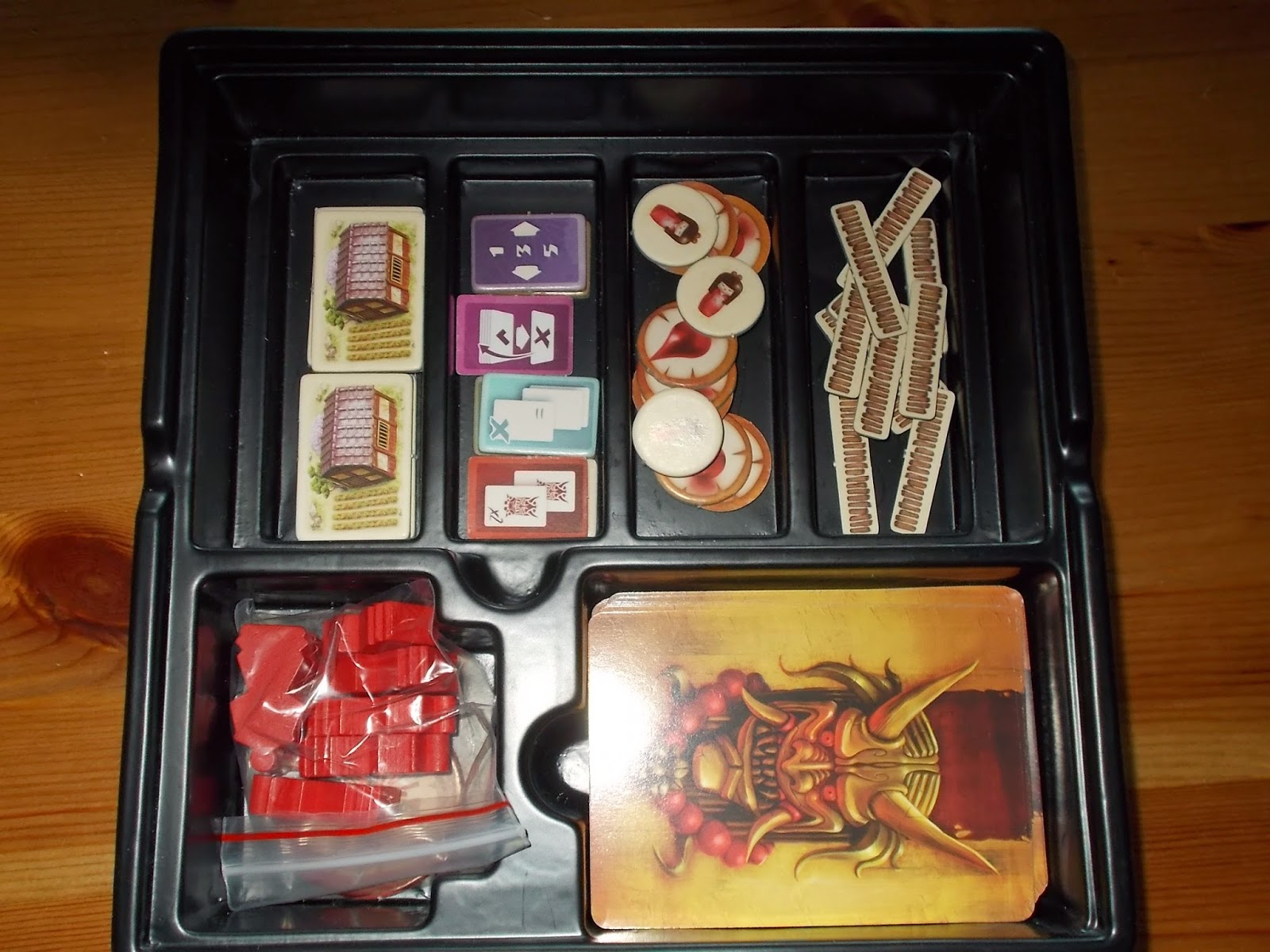 Two to seven players, optimal obviously being seven, but not required.  The game follows a simple mechanic, with a deck of Raider cards to represent those looting the village and the samurai themselves.  Each turn the samurai take it in turn to take on those attacking the village, with each samurai drawing cards in turn until they feel they can handle no more.  For each card drawn, the samurai has the option to Fight, Support, or Pass. 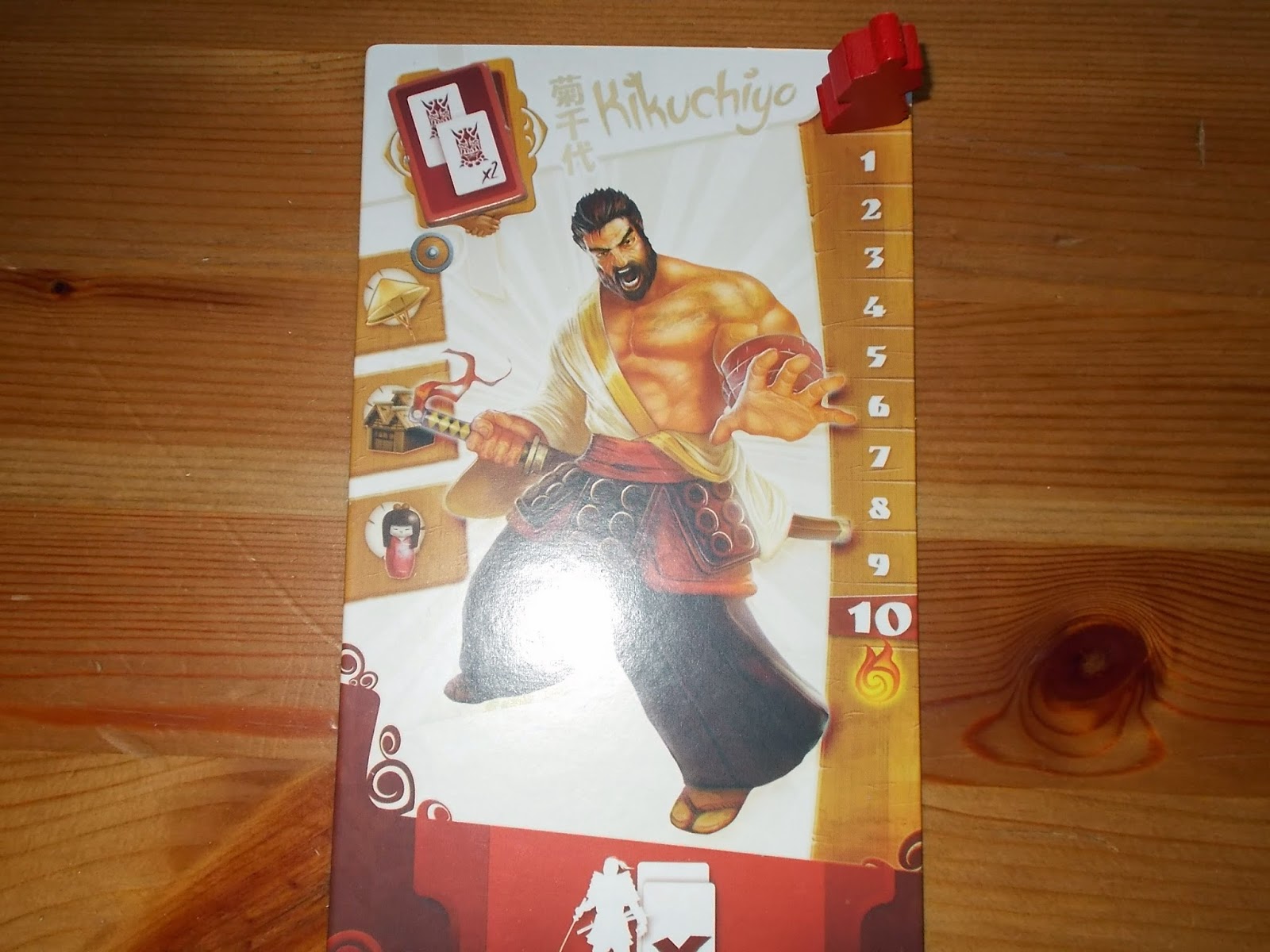 If fighting, the samurai chooses either to Confront the enemy, in which case they place the raider card to the right of their card and at the end of the round, applies any penalty listed in the bottom left of the raider card. 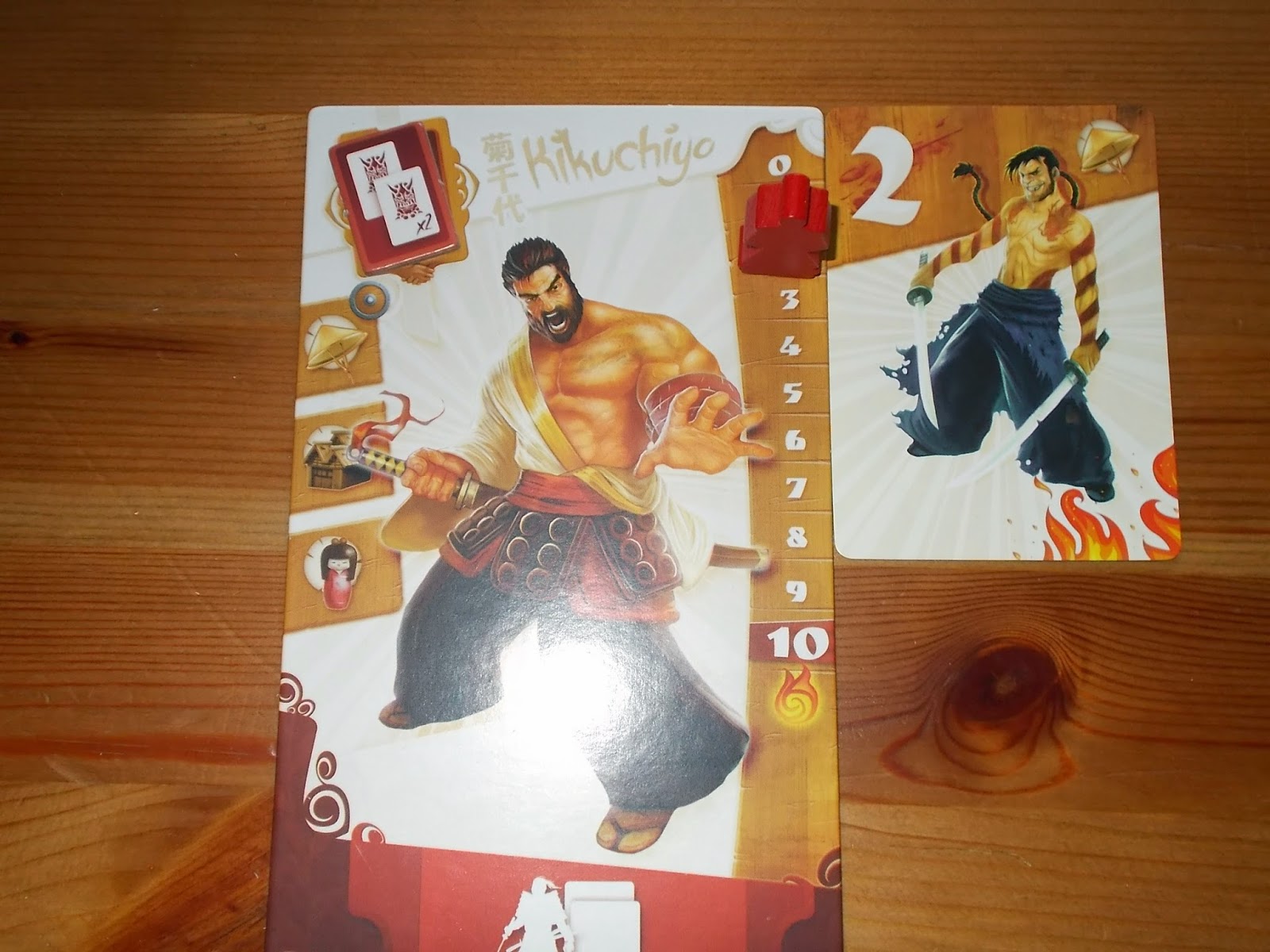 Or they choose to defend if they have the relevant Icon available on the left hand side of their character. 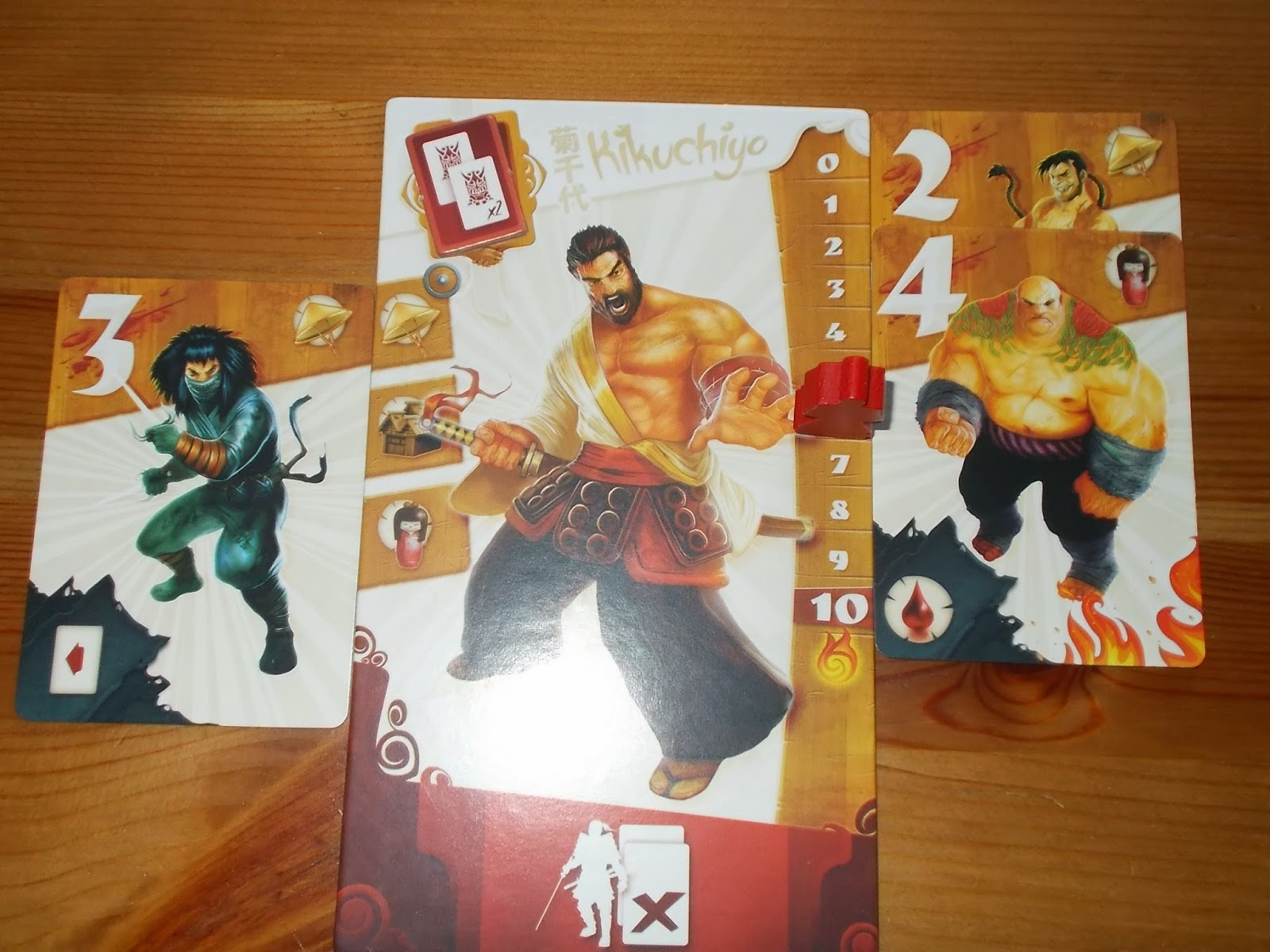 The second option is to support, at which point, they pass their special ability token to another samurai for them to use as they can, with the final option being to pass and play no further part in the combat from that point forwards.

As more cards are drawn, so the odds against the samurai stack up and they have to watch out for going over their health level, at which point a wound is scored.  The point just below it is the one to aim for, at which point they can use their own special ability (Kiai) for their own purposes. 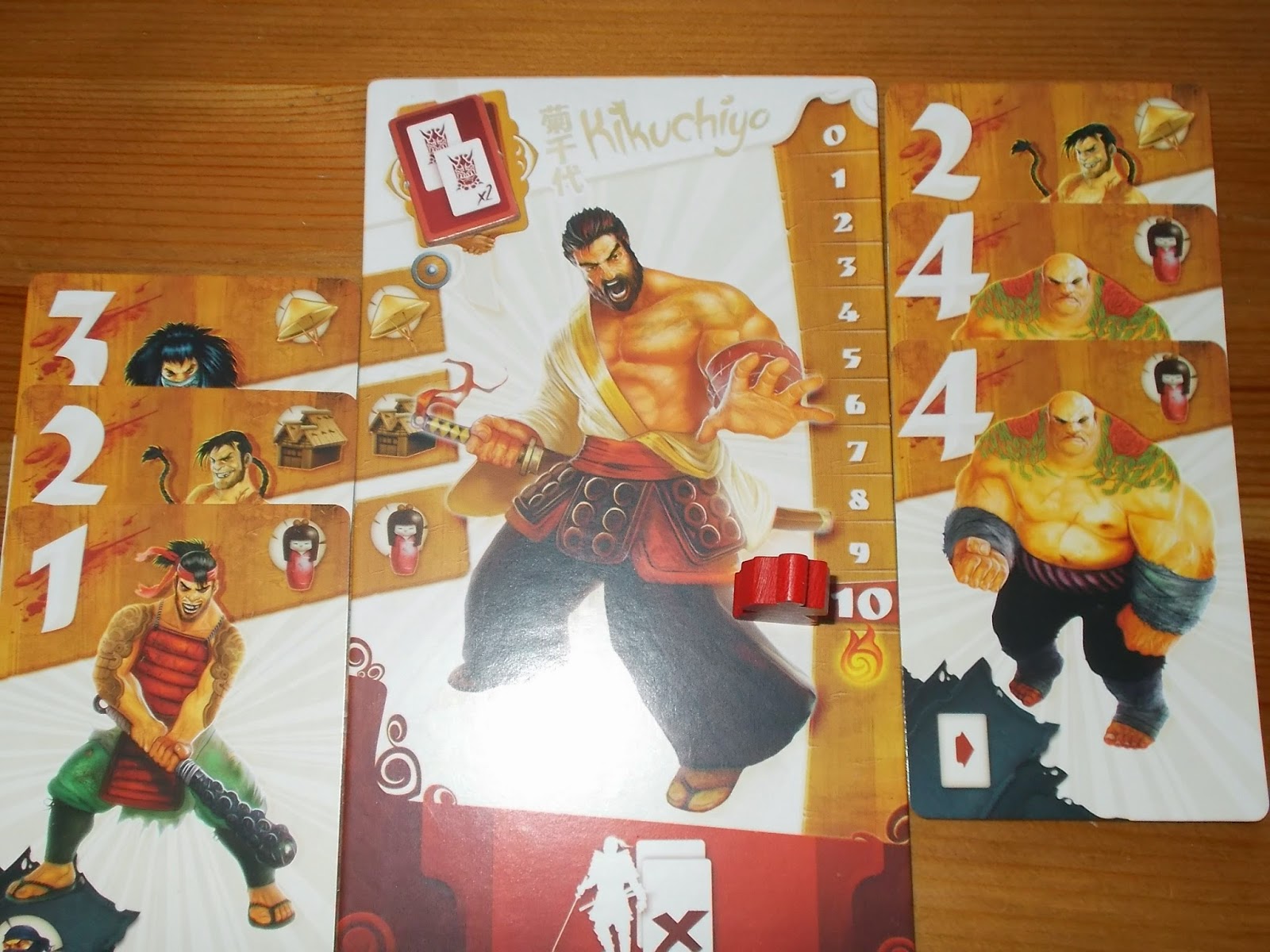 If they go over the level of their special ability, they sustain a wound, if while wounded they take another wound, they flip to beast form which gives them increased health levels and a more powerful Kiai ability.  Another wound at this stage will kill them and lose the game for all the players. 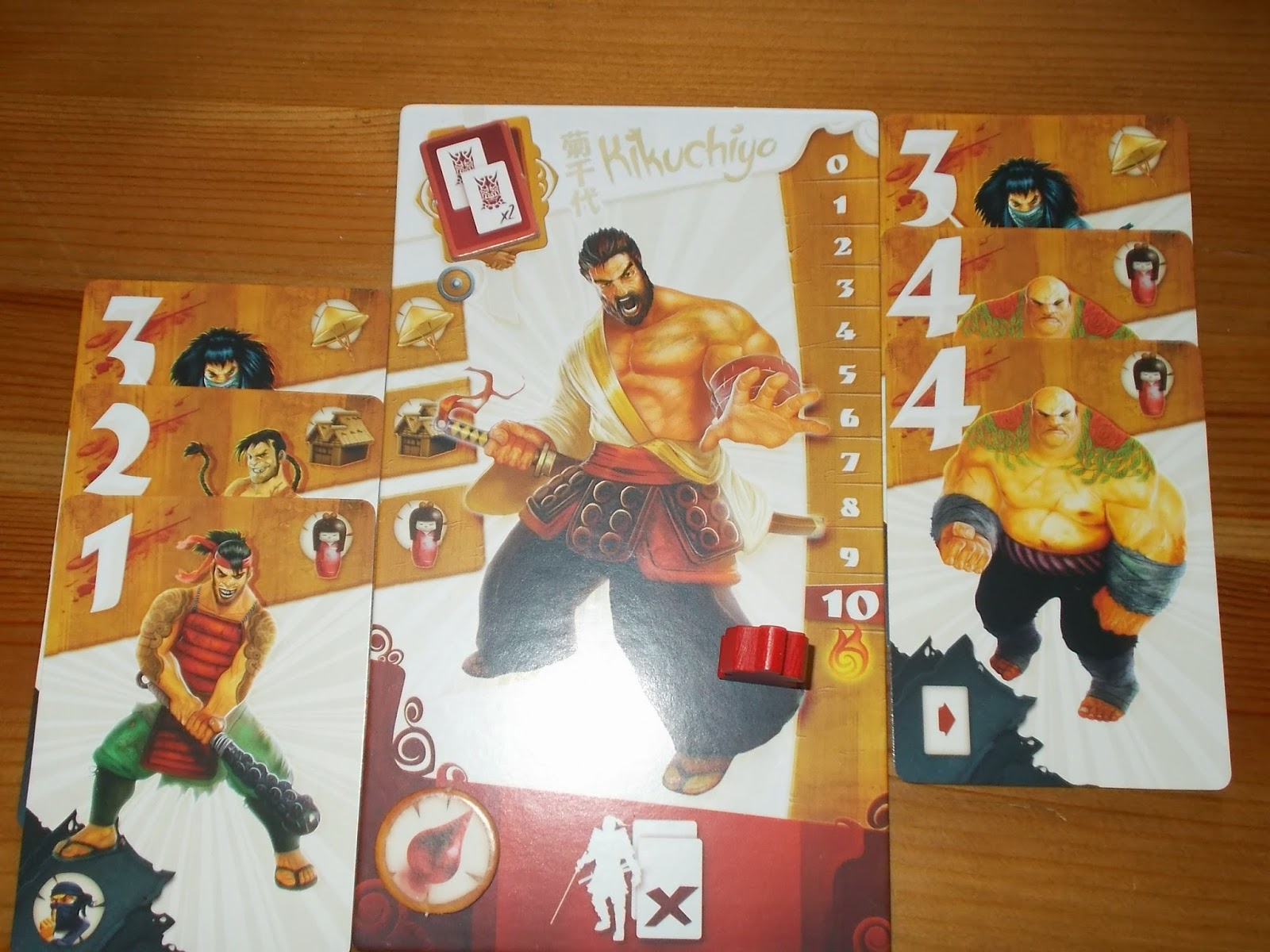 The game is played over three rounds, with the basic raiders being used in the first round, the slightly more powerful in the second, and the Bosses in the third (at which point things get really difficult), because the turn only ends when the raider deck is run out completely. 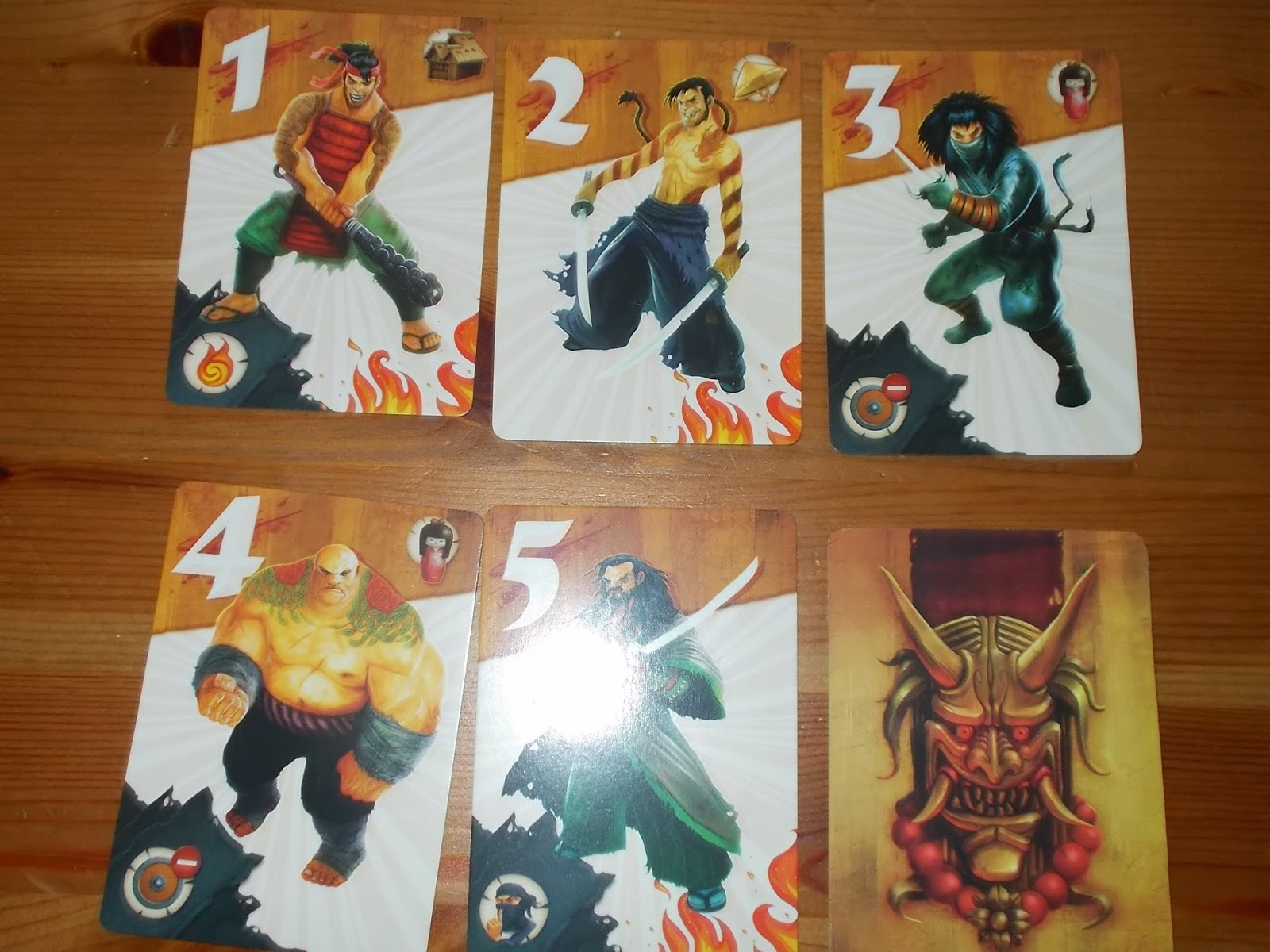 On first glance, it does look like a game of complete chance, where drawing the wrong card can wound you and then get you killed even faster.  To be fair, the first times you play the game before you get the intricacies of it, that will be happening, and it will be happening a lot.  If the samurai are used to try and play as lone warriors, then they’ll have no chance to beat the raiders except with blind luck, and that’s never a good strategy. 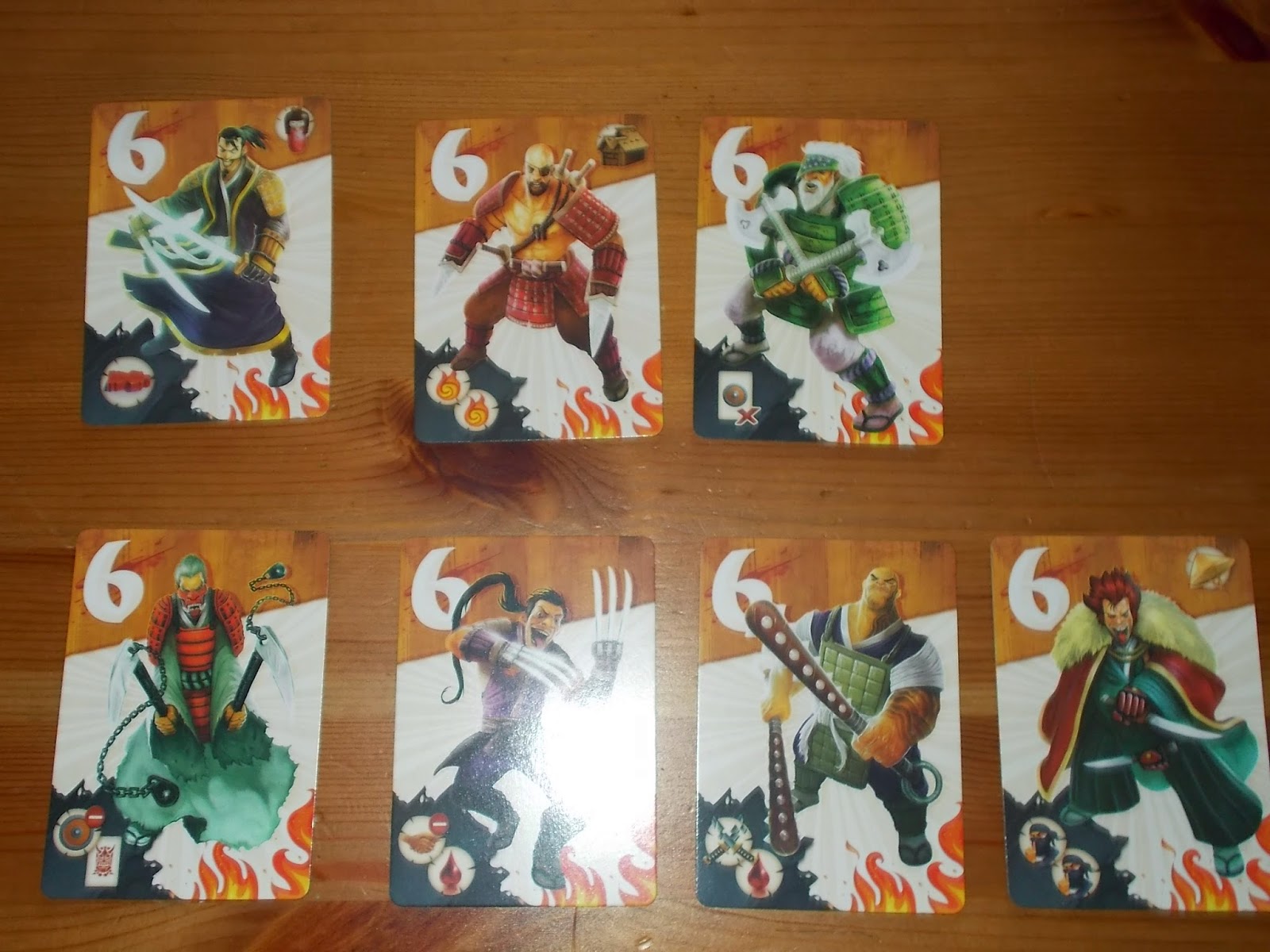 If the Samurai work together, lend support all the time and ensure that they all watch out for each other, then the game is difficult, but not impossible.  There’s a warning in the book that the game is very complex and that victory in the first few games will be elusive, but there’s no warning that you really need to play as a team (perhaps because the designers presumed that the game would be played as the film was written, with everyone helping as they should), and it’s that that makes the interesting part of this game.  Played as a group, with a reasonable number of players, it’s not difficult to get a victory, and then you move on to the hard game, where it’s difficult to get through a turn without people getting done in.

Overall, I like this one, it’s a fast moving game that draws well upon the idea of a skilled few taking on a mass of mooks, and it evokes the feel of the film well.  It’s frustrating to begin with, particularly if you don’t have a group that’s used to co-operative play, but give it a chance, it’s worth working through those first few problems to get to the excellent game underneath it.