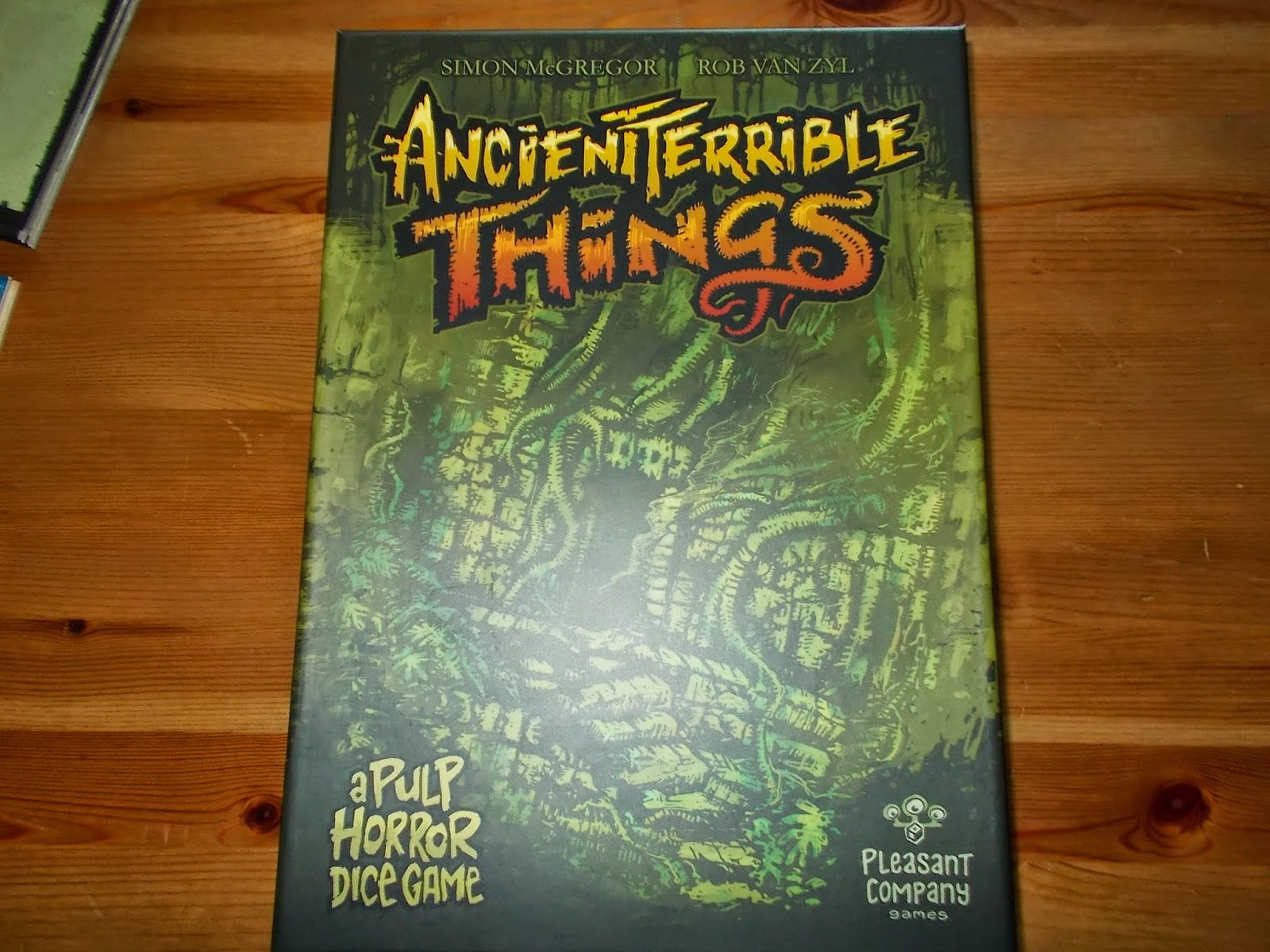 On the back of the post about Essen, I thought to review the games that I had on my list when I went there.  Some of them were things I’d been looking at for a while, some were just things that I’d seen on the boardgamegeek list and thought to take a look at.

Ancient Terrible Things I’ve had my eye on since it was a kickstarter that I just couldn’t put in on at the time (too much invested in other projects to justify the cost).  But when I found it was at Spiel, it was top of the list.

And was it ever worth it... 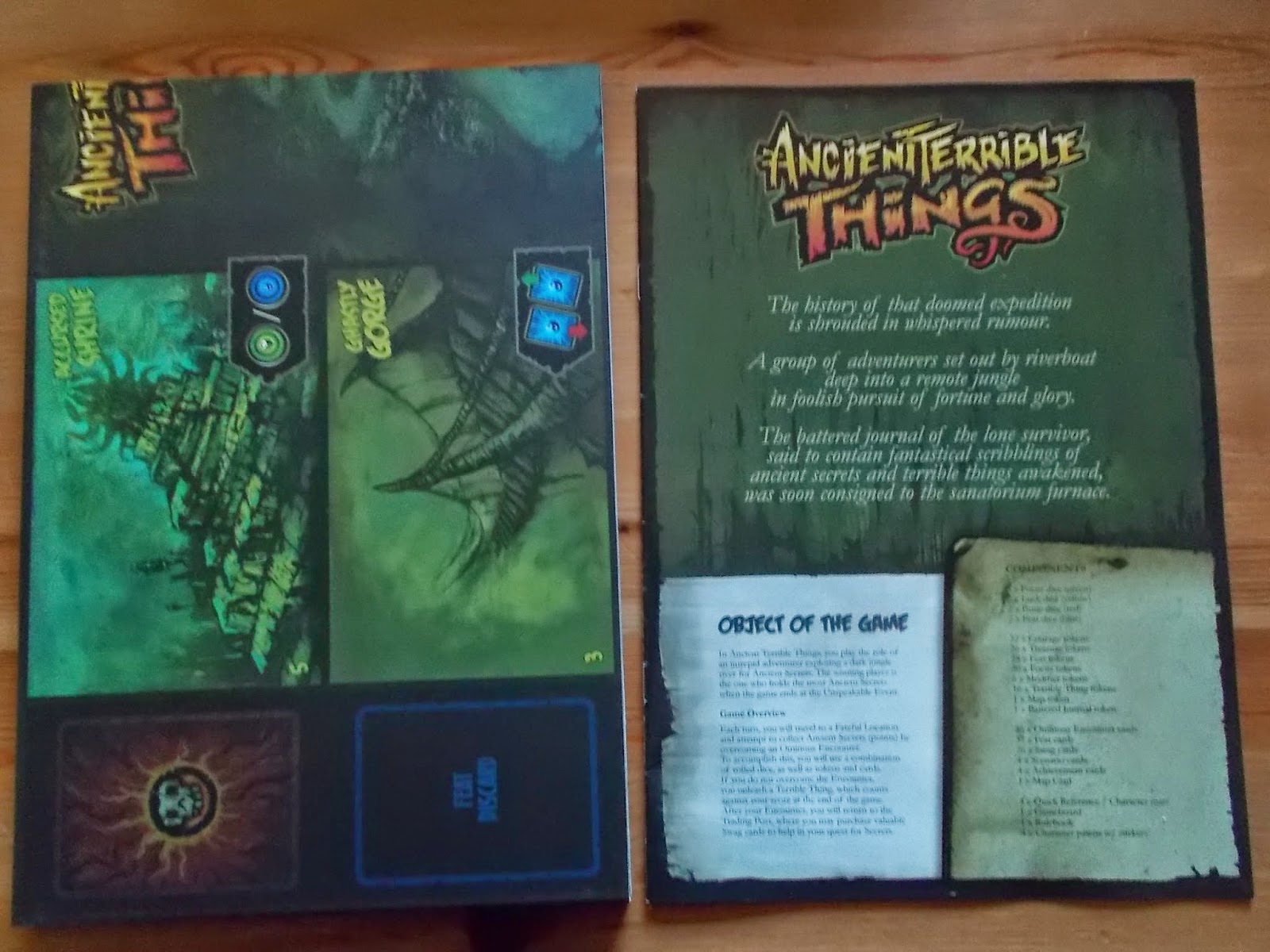 Ancient Terrible Things is the game of a doomed expedition up a river to the dark secrets found at the top of it.  Players take the role of one of four different characters, the Captain, Journalist, Prospector, and Heiress, as they make their way up the river to see what they find there.  There’s no difference in the characters beyond what they start with, so everyone has an equal chance to make it. 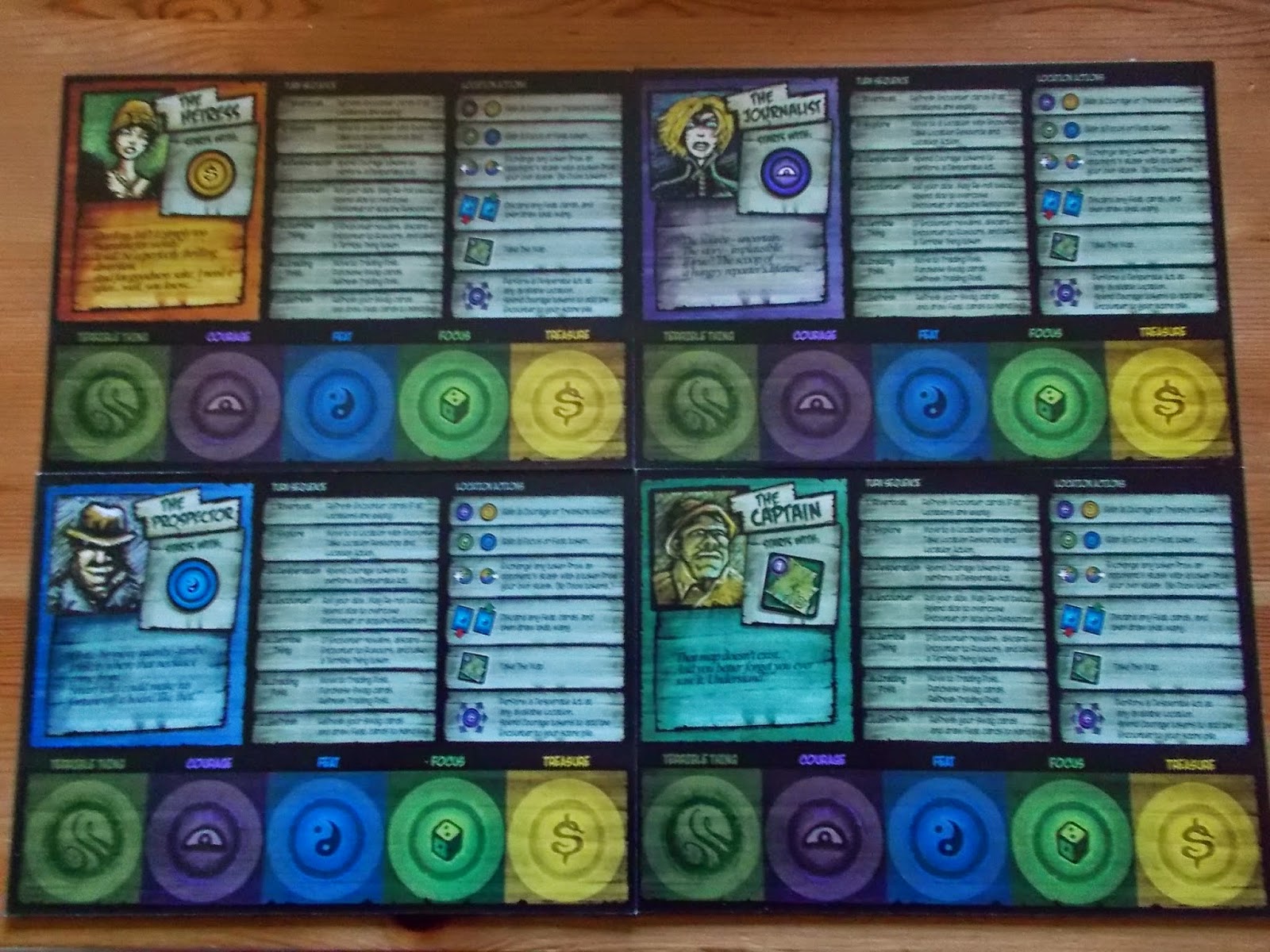 The first thing to look at is the production values of the game, and there’s no other way to describe it, but excellent.  The board and pieces have a matt finish to them which lends itself well to the nature of the game, everything being shiny wouldn’t be appropriate to a game with such a dark subject.  The dice and counters are all good and there’s enough counters to play a four player game and have spare left over. 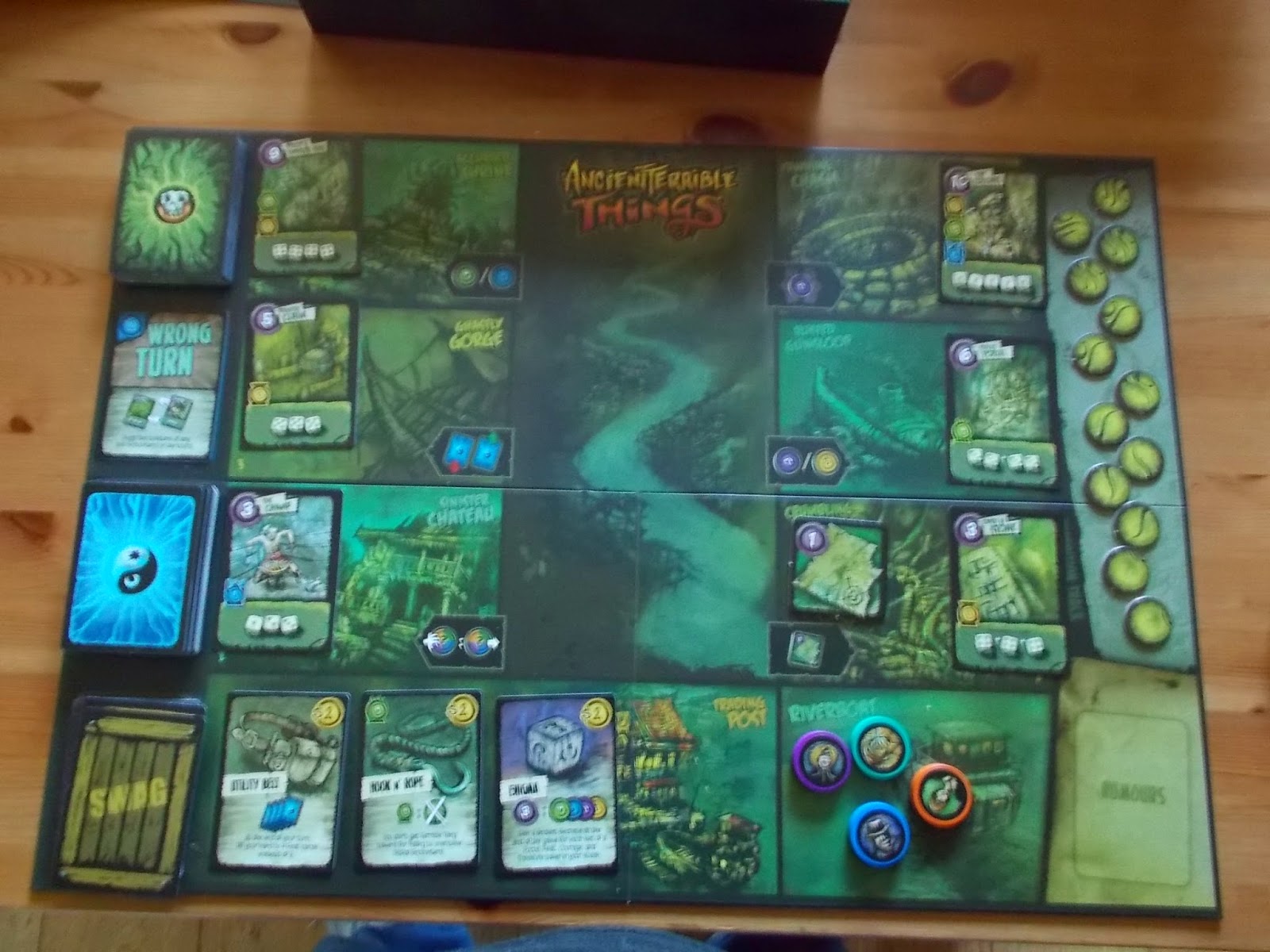 The mechanics of the game are simple, each turn the players start at the Riverboat (bottom of the board), and choose which one of the encounters to take a go at.  Their character token is moved to the relevant square and they take the bonus from that square which varies from square to square and will influence players decisions on what they go for. 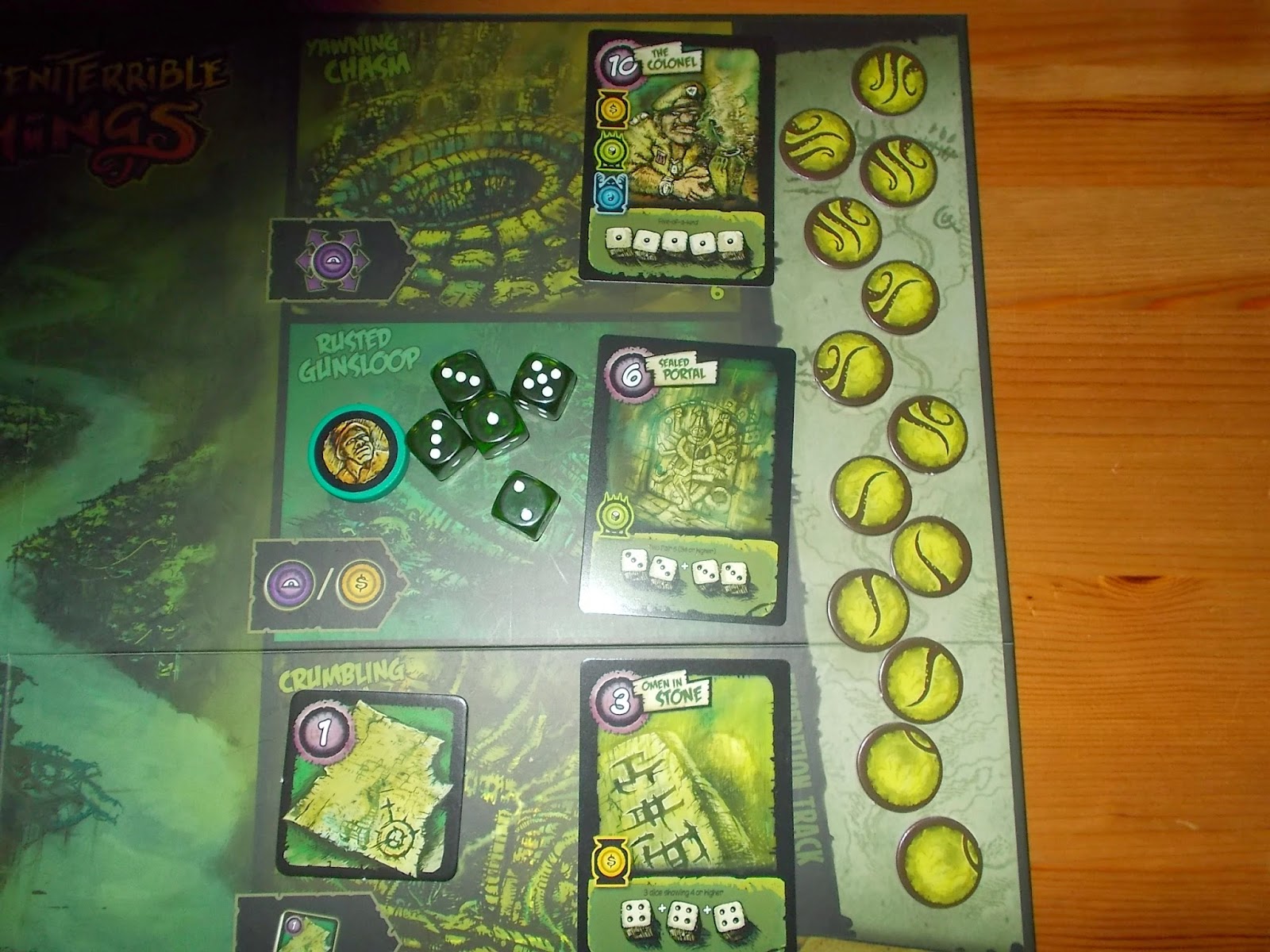 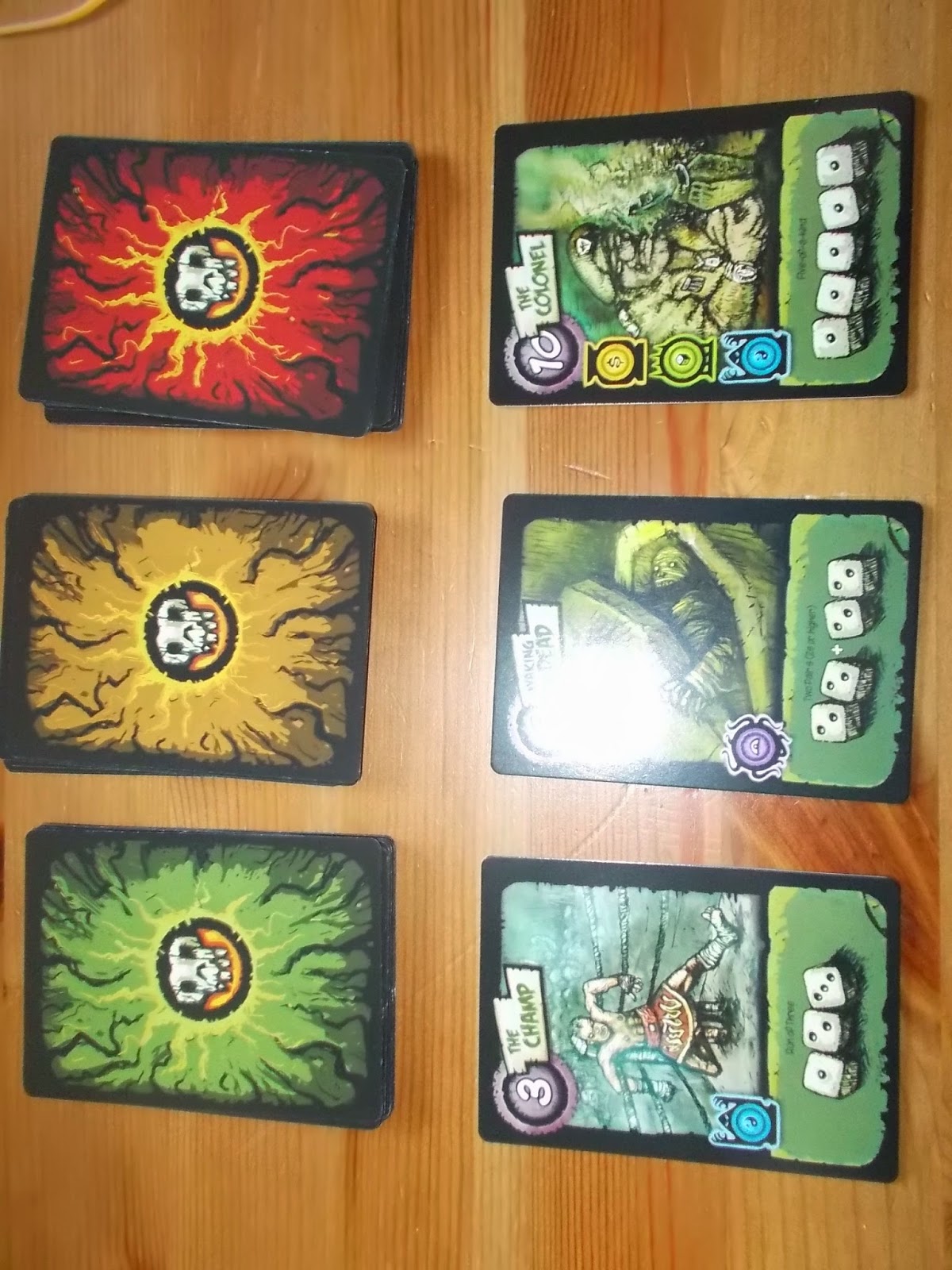 Each encounter has a victory condition in the form of a dice roll and a number or series of numbers that have to be met to eliminate the card.  Players get three rolls of the regular green dice, but must reroll all dice at the same time unless they have a feat card or piece of equipment that allows them to hold dice, roll additional dice, or reroll only a few.  If they succeed in the encounter, the encounter card goes into their stash and becomes a part of their victory points.  If they fail, the encounter goes into the rumours pile on the deck and they take one of the river tokens on the right of the board. 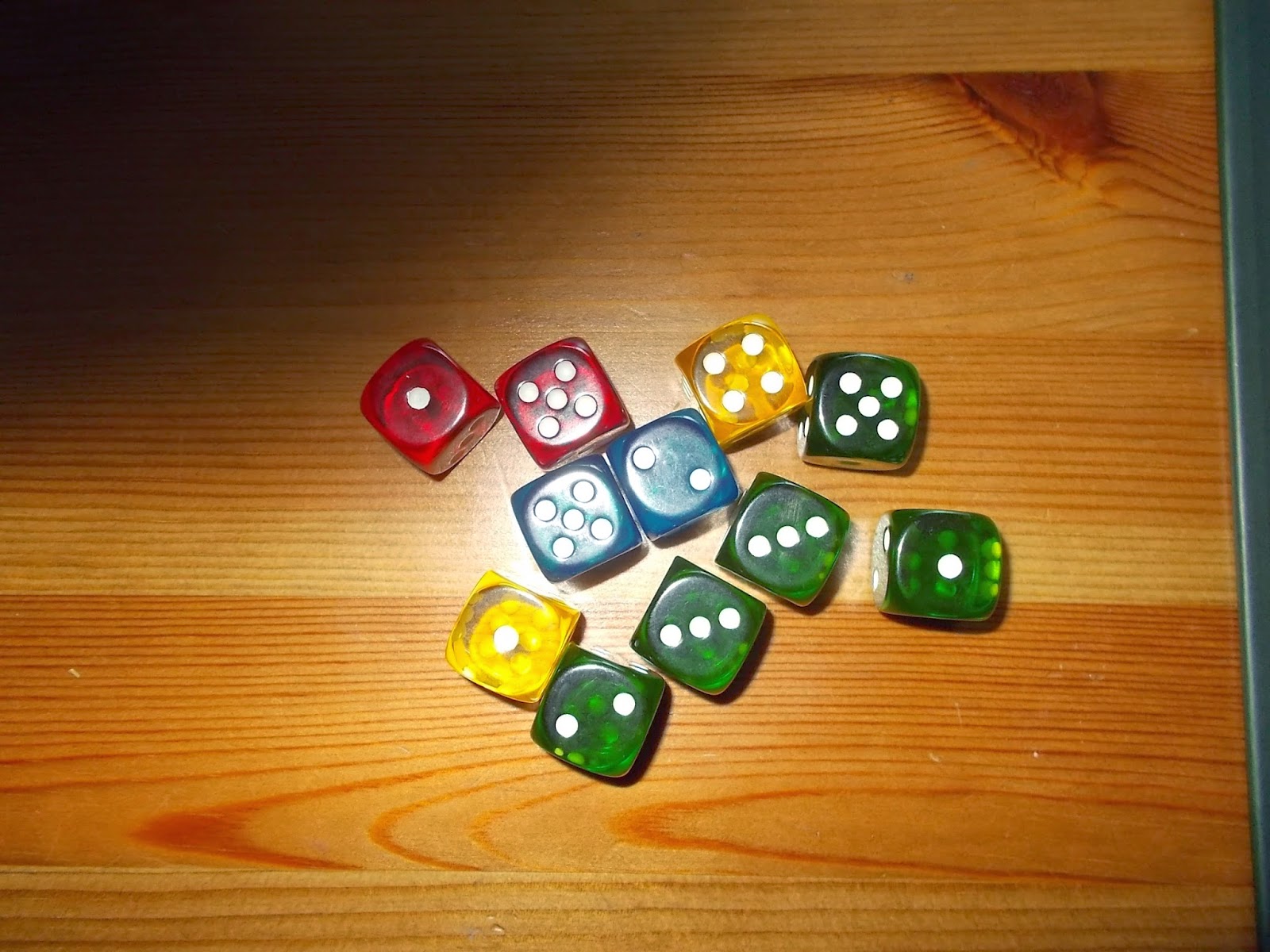 The game ends when all encounters have been played through or the river runs its course to the end...

Whether the encounter is won or lost, the character then moves to the Trading post and has the option (if they have sufficient treasure cards) to buy some of the goods on offer there before play passes to the next player.  When all characters are at the trading post, everyone moves back to the riverboat and play begins again, with the character who possesses the map going first in that round.

To help them in their endeavours, the characters have four attributes that  can amass tokens at the base of their character boards, being Courage (Purple), Feats (Blue), Focus (Green), and Treasure (Yellow). 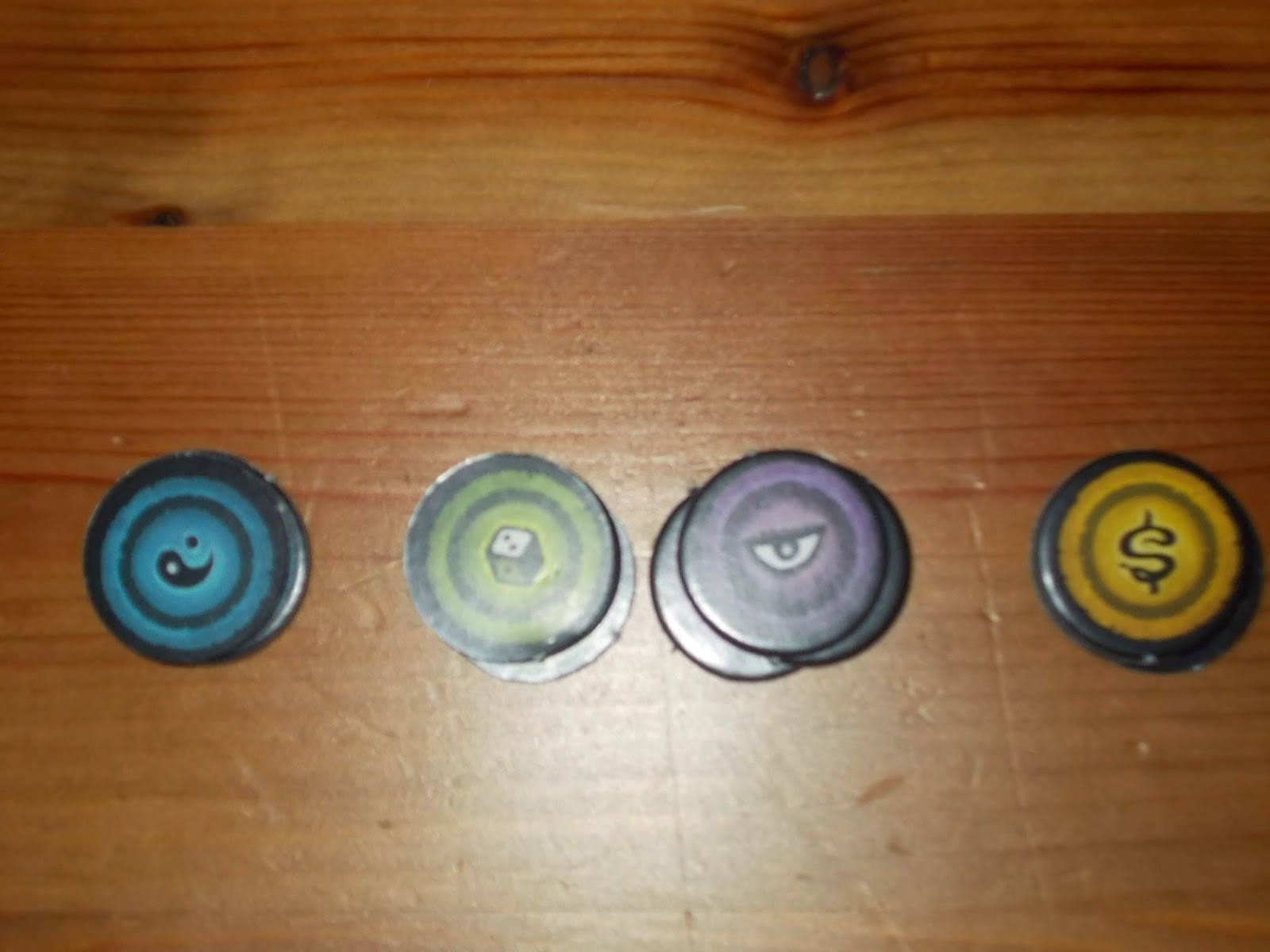 Courage tokens can be used to buy your way through an encounter for the same cost as the victory points on that encounter, this may seem an easy way out, and in the early stages of the game, they can be used that way, but those using their tokens early in the game may find that they don’t have enough courage later in the game when they really want to be buying their way out of the difficult encounters.
Feat tokens are used to play Feats (surprisingly enough), with the cost in tokens listed at the top of each Feat card.  Feat cards are automatically replenished when they are used, but Feat tokens run down quickly as well, so sometimes holding on to them till you really need to use them is the best policy. Focus tokens are used to reroll single dice from the pool, one die for each token used and you can use as many tokens as you like but when they’re gone, they’re gone, and very often they’re far more useful at the end of the game. 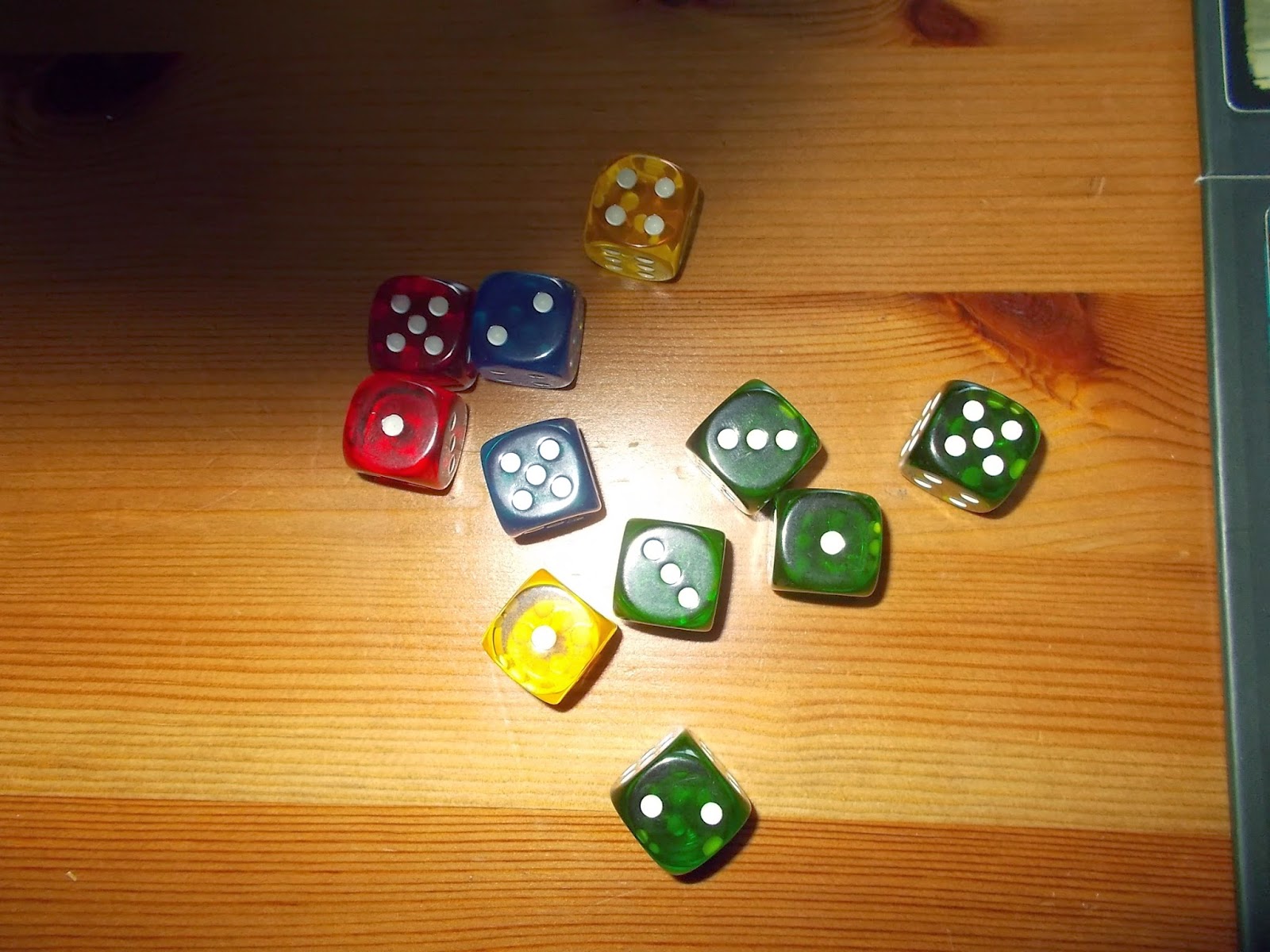 Treasure tokens are exactly what it suggests on the tin, they’re used to buy things at the trading post, no treasure, no swag, simple... 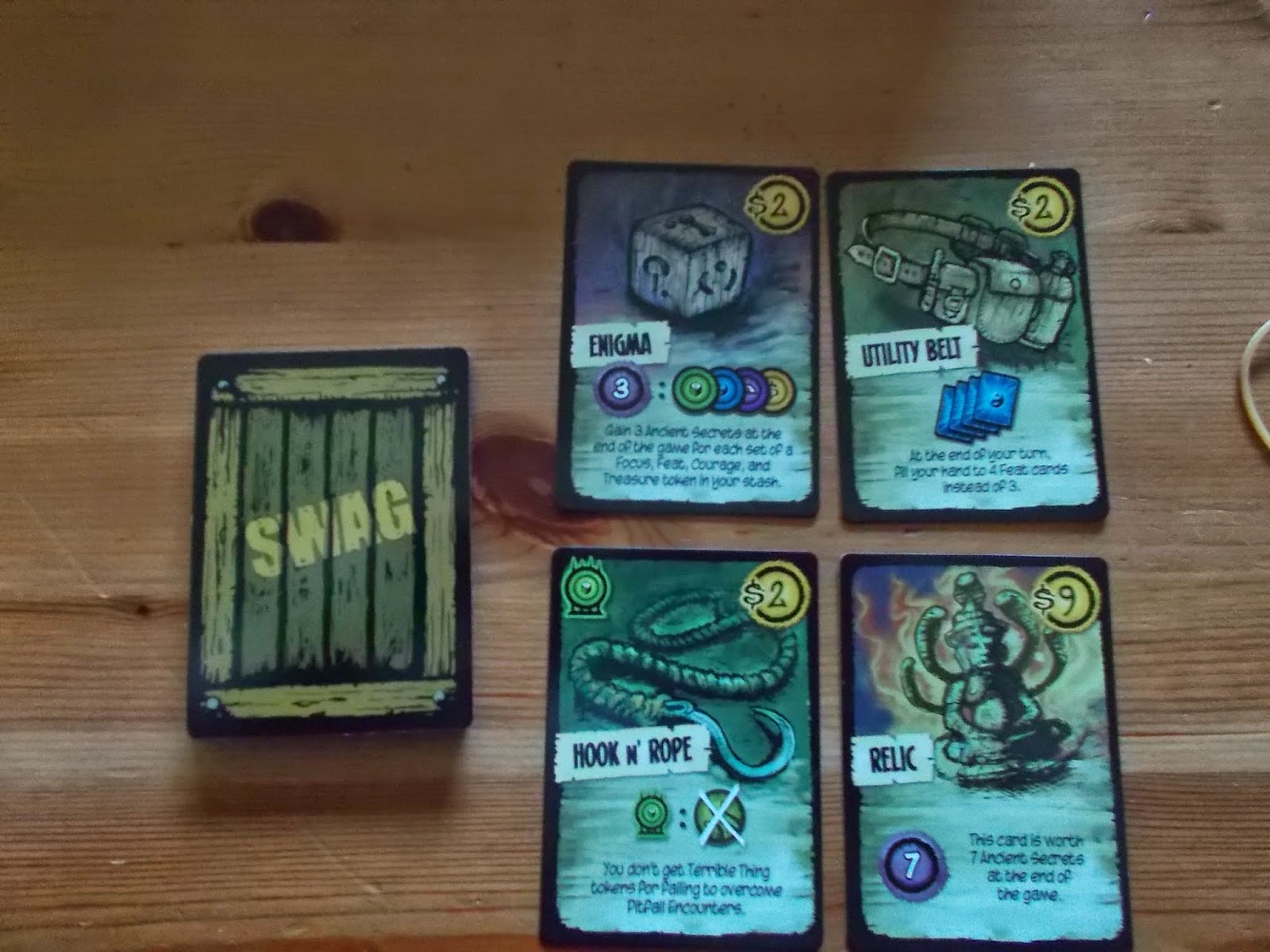 Five minute set up and you’re good to go on this game, it plays within an hour no matter how many players you’ve got and once you’ve got the hang of it, it plays even faster.  The feat and equipment cards make the game different every time, and there are two levels of difficulty that the game can be played at for those who want more of a challenge.  The dice mechanic is an easy one, the numbers on the cards range from one number at a certain level to rolling five of a kind on a single roll, but if you score the card, you can still do something with the dice left over as indicated below.
This allows you to build up resources, especially when you fail the encounter and can use all the dice to amass resources, which will give you a greater chance to buy things or get the tokens needed to beat the harder encounters.

All in all I’ve played this a number of times since I got it, everyone who’s played it has enjoyed it, and while the aims remain the same, the way in which the mechanics are put together makes every game fresh, with no one particular way to win the game that can’t be defeated by other cards.

It’s produced by a South African company called (Ironically enough for the game) Pleasant Company Games, and they’re going to be producing an expansion to it in the near future.  I met the people behind it on the stall at Spiel and they’re interesting and enthusiastic in the way that people making games should be, they’ve having other ideas and if they all turn out to be as good as this game, there’s a bright future in it for them.

The game can be found on Amazon for everyone apart from England, who can find it at

There is a website for the game at http://www.ancientterriblethings.com/
Posted by John Dodd at 15:51