Game Review - Sentinels of the Multiverse

Sentinels of the Multiverse 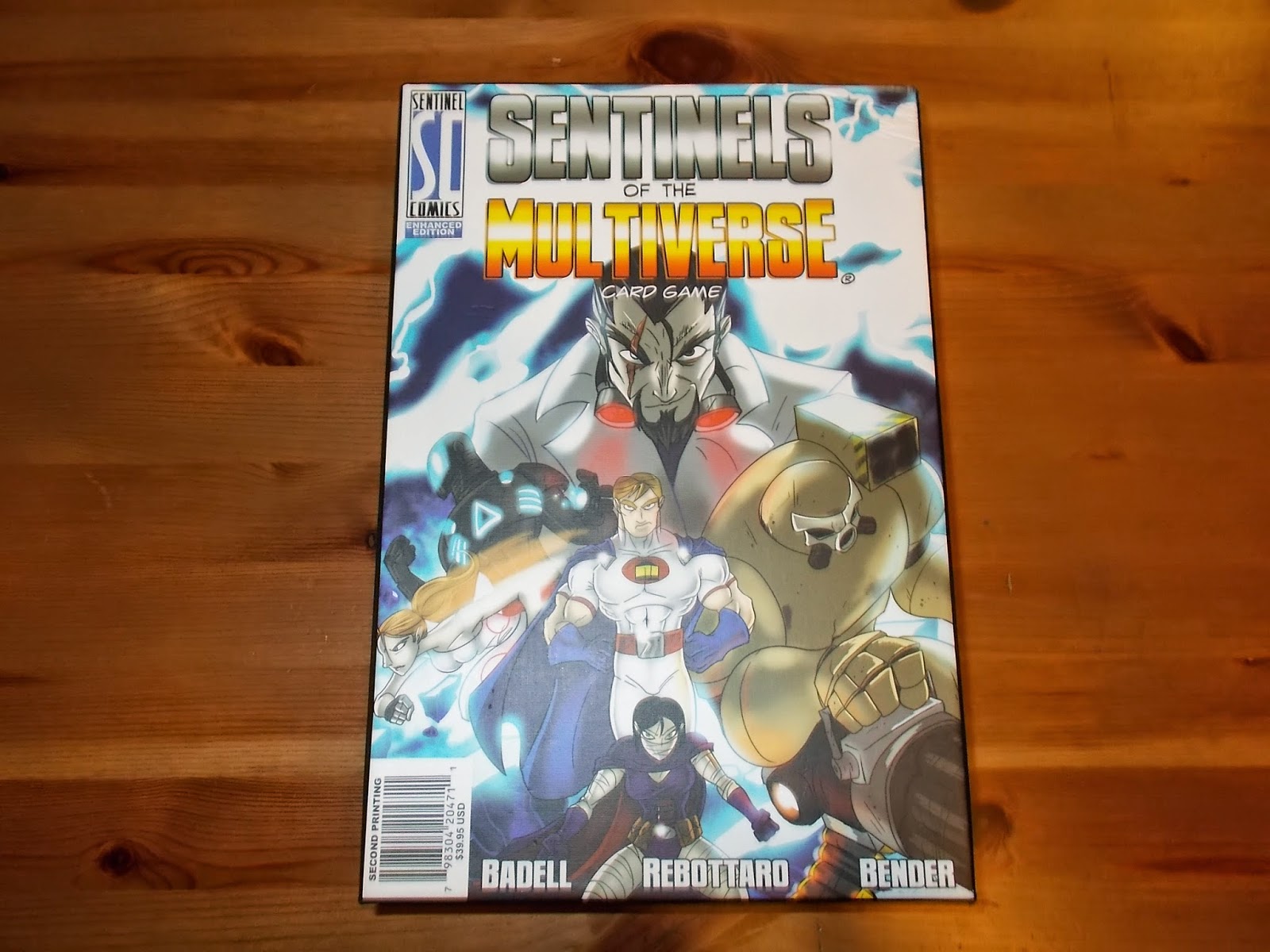 There have been a number of different ages in comics, from the golden age that started it all, to the modern age that we find ourselves in now, and while I don’t read them much anymore (got bored of people getting killed one week for shock value and getting brought back a month later), I do recognise that things have evolved somewhat.

At one point, the comics were little more than “Villain of the month”, nicely contained with a swift moral message at the end of it, usually something about a previous conflict or whatever was a hot topic at the time, and for many (Myself included), that was more than enough.

Sentinels of the Multiverse is the game of that era of comics, and it draws from the influences of such comics as the Avengers, the Justice League and the Squadron Supreme, where the villains were usually strong enough to take on several heroes at once, and it was only through teamwork that the heroes stood any chance at all. 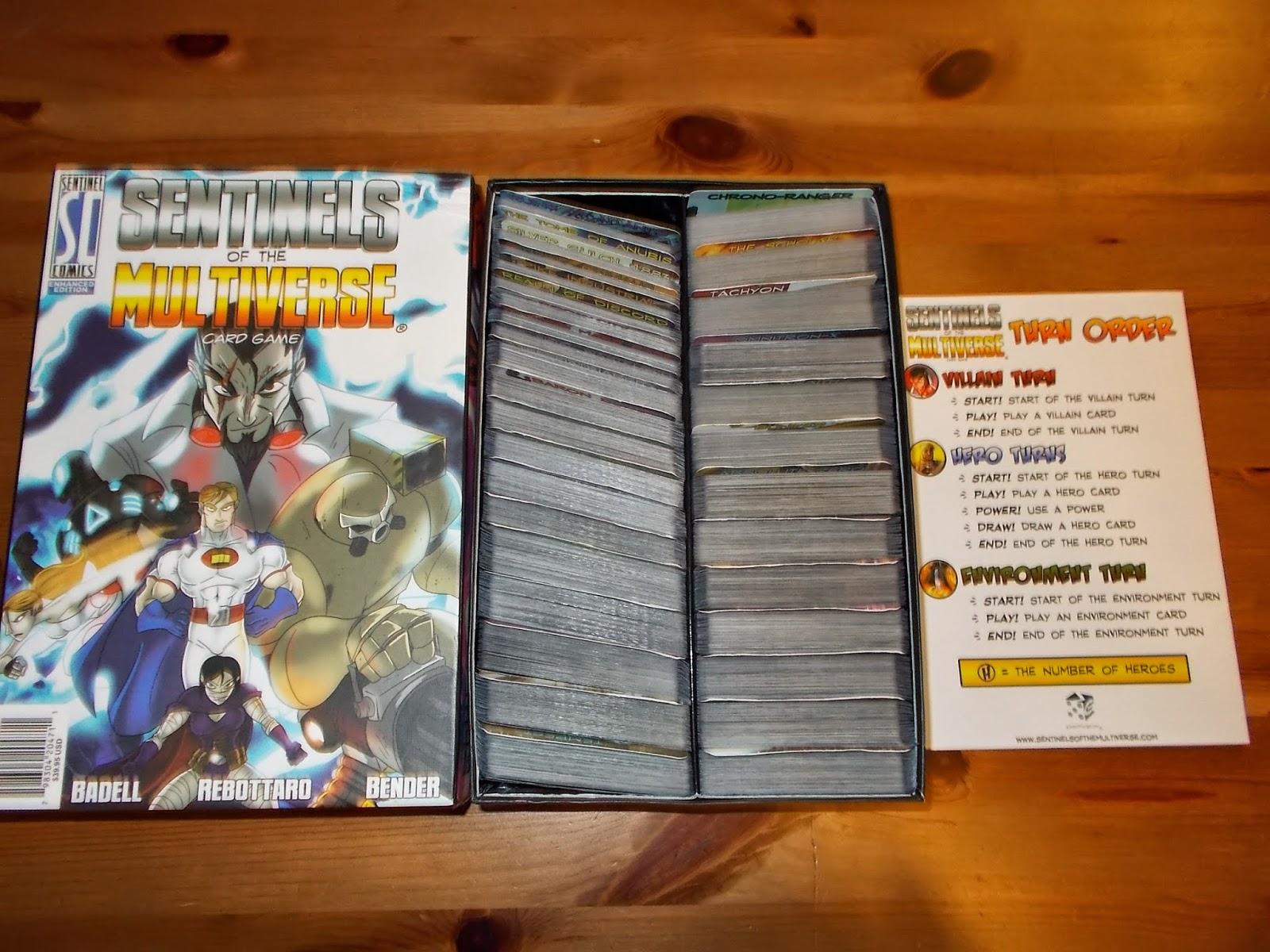 The premise is easy, take a single super villain, all the players take the role of a hero, and then fight until there’s only one side standing.  The villains actions are all pre-programmed, so all the heroes need to do it co-ordinate their own attacks to ensure that they make it through.

The interesting thing here is that as players, just like many of the heroes of old, you know what the villain is going to do next, you’ve got their Modus Operandi written on the card in front of you, so defeating them should be a matter of simplicity…

There is the matter of the location where the heroes must face the villain, which carries complications all its own as the villain is unlikely to let the players have a go at them on open ground with no civilians around.  Then there’s the matter of the environment around them, as no battle ever occurs on a sunny day with icecream for everyone…

There are several decks of cards to be managed, which sounds strenuous, but really isn’t, each deck is only used once a turn, the modifications to the game are applied there and then, and they last until the next round when the deck is drawn from again.

All the villains have a deck of cards filled with minions that they summon in the case of Grand Warlord Voss (Who really isn’t Thanos, honest!), to various bits of technology and mysticism in the case of Baron Blade (Who really isn’t Doctor Doom, honest!), and these cards are drawn every turn, adding to what the heroes have to deal with.  In the case of some villains, the cards make the villain harder to hit, or make them hit harder, and the game has been scaled so that many of the abilities that the villains have increase as the number of heroes ranked against them increases.  It’s possible to get a lucky victory once in a while, but it really is once in a great while that luck plays any part in the game. 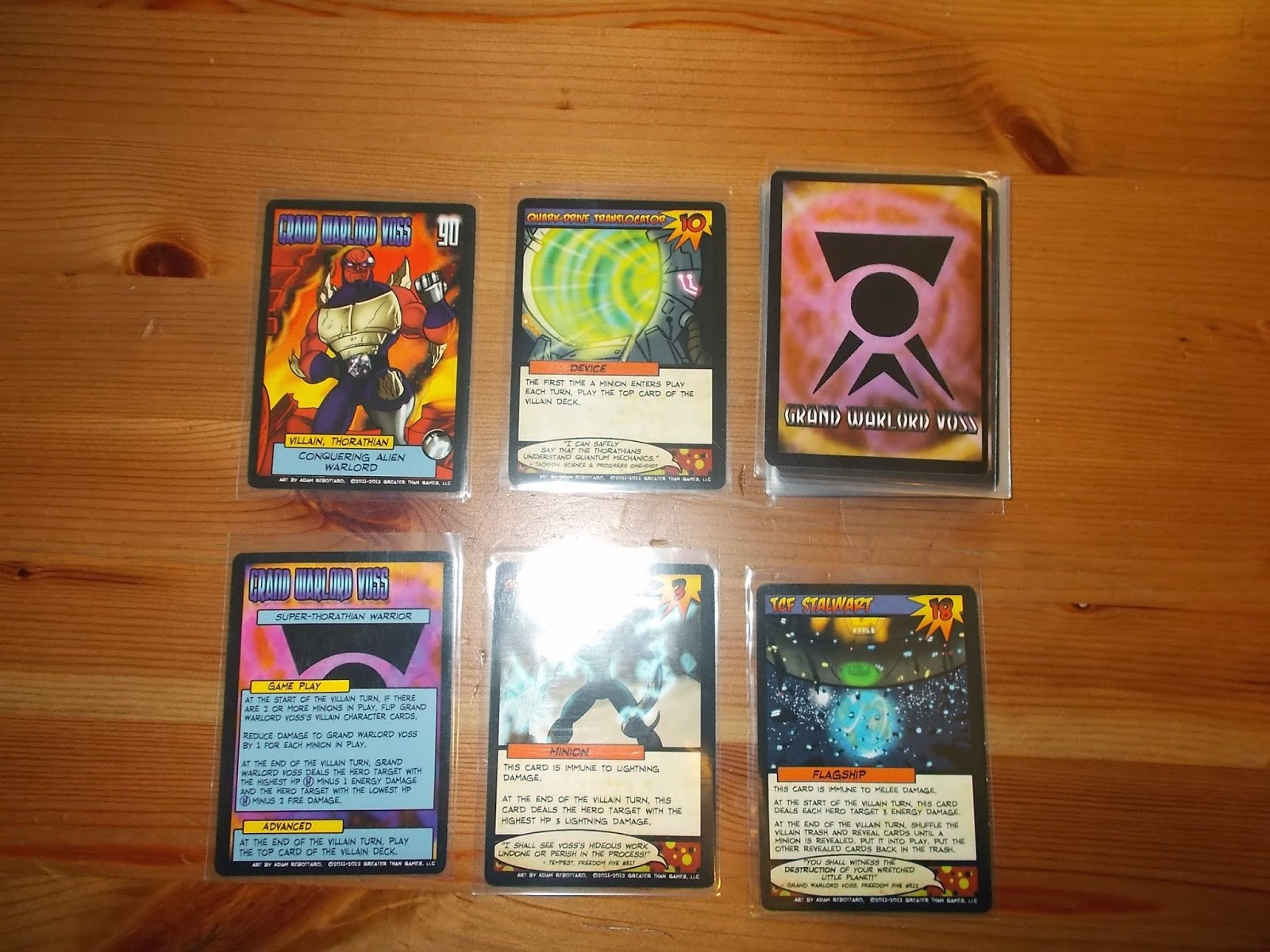 The Heroes are very much like those found in the Silver Age, usually with a single power or defining characteristic that marks them out from the others, some of the heroes are stronger all around than the others, such as Legacy (Superman) and Expatriette (Punisher), with some of the others being a little strange to say the least, such as the Scholar (clearly the Dude from Big Lebowski) and Absolute Zero (Mr Freeze, who can only damage things by hurting himself…).  Most of them have co-operative abilities that complement the group or can hit really hard by themselves but need the support of others to make sure they don’t go down too quickly. 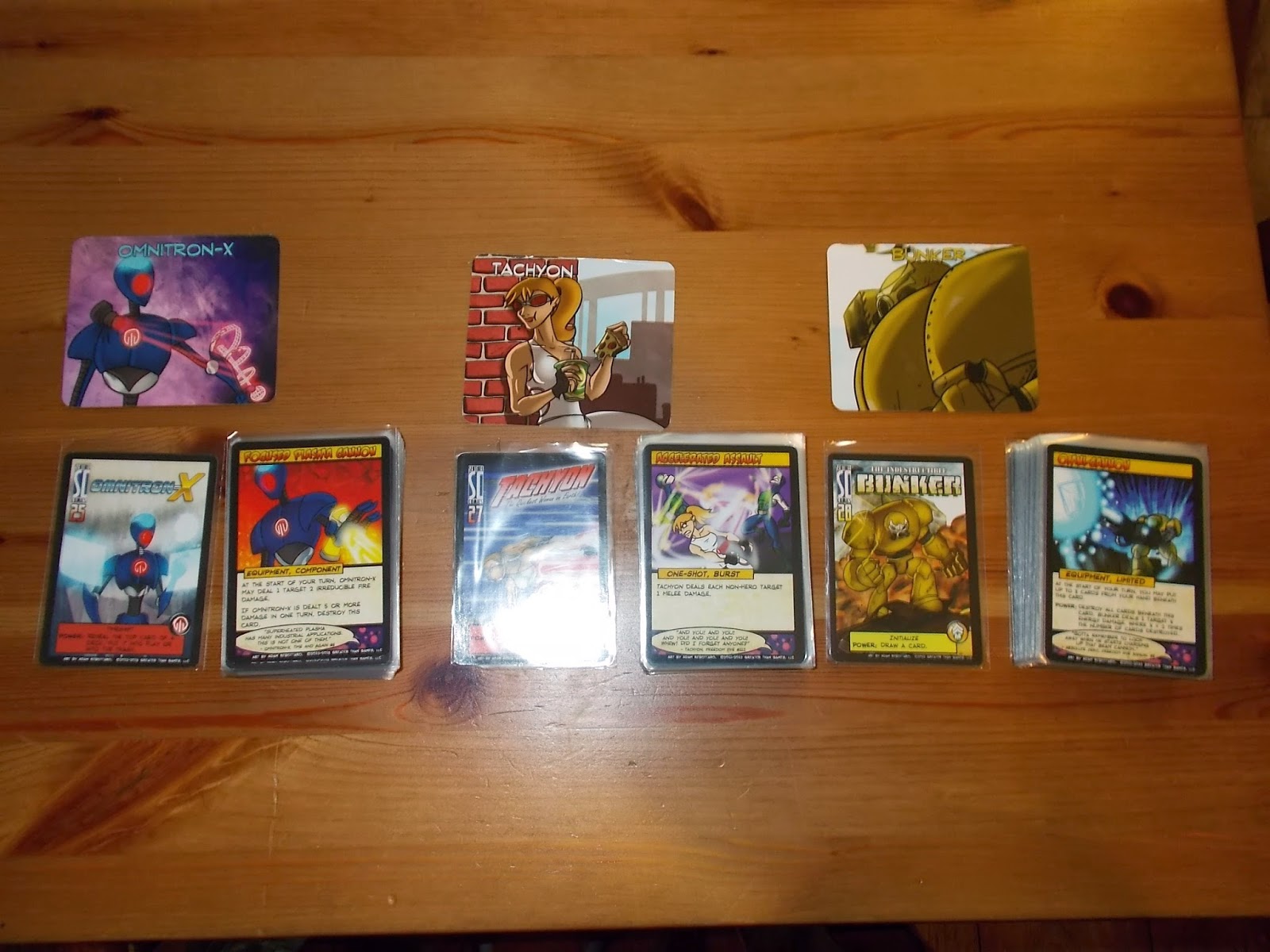 Given that all the actions that the players can take are drawn from a deck, it’s possible that a bad shuffle will wreck the chances of the players getting the early start on the villain that’s needed to stand a good chance to win, but the more players that you have, the less chance there is that you’ll all get a bad shuffle in the beginning.  The final kicker is that even when a hero is taken out (as invariably one will be, we’ve only ever had one game where all the heroes were still standing and everyone was in low single digits of hit points), their character card is flipped over and they still get to contribute something each turn that will be of use to the group.

The game plays quickly once you’ve got the hang of it and it’s possible to play a game of it in less than half an hour, but expect the first game to last
at least an hour and probably more.  While playing several heroes pounding on a villain doesn’t sound like the most interesting way to spend an hour, the game is exceptionally well balanced and ensures that no matter how many/few the heroes are, the villain will be a good match for them (for example, damage done by most villains is expressed as X, where X is the number of Heroes still active), and that unless everyone draws exactly the right cards at exactly the right time, it will not be an easy fight.

Production values are good, the cards are all full colour and neatly laid out, the boxes are designed to make storage of the cards easy and it’s possible to transport all the various expansions in the two main boxes. 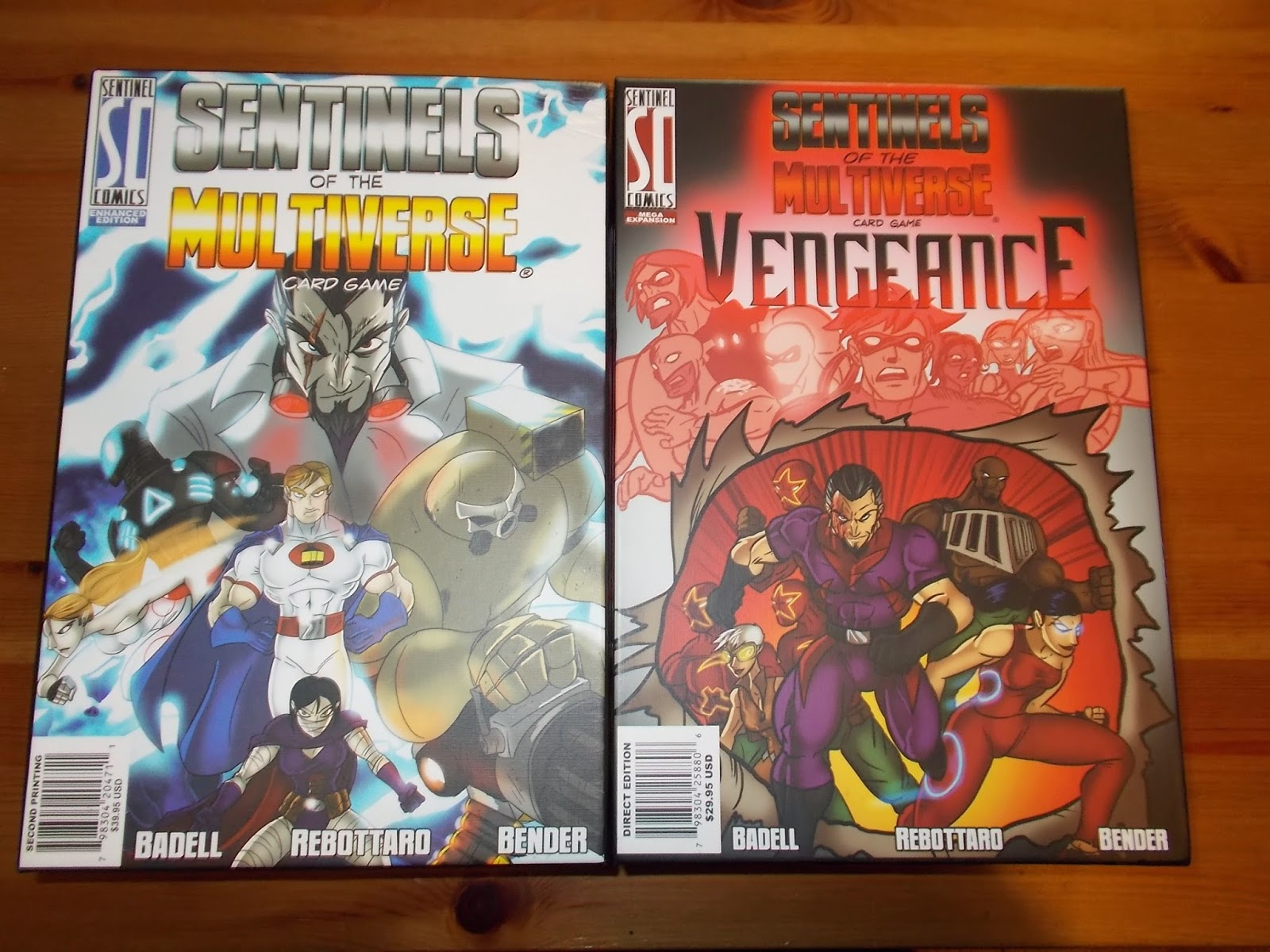 Sentinels has been going for some time now since winning the best game award at Gencon 2011 and there’s been a number of expansions for the game as well as limited edition cards and an evolving storyline that is added to with every new release.  It’s a game that anyone can pick up and run with and even if you’re not a fan of comics in general, the way in which the game is presented makes it easy for anyone to get involved.

Either way, for an occasional bout of villain bashing, it's hard to beat...


The main website for the game can be found at http://sentinelsofthemultiverse.com/
Posted by John Dodd at 13:00