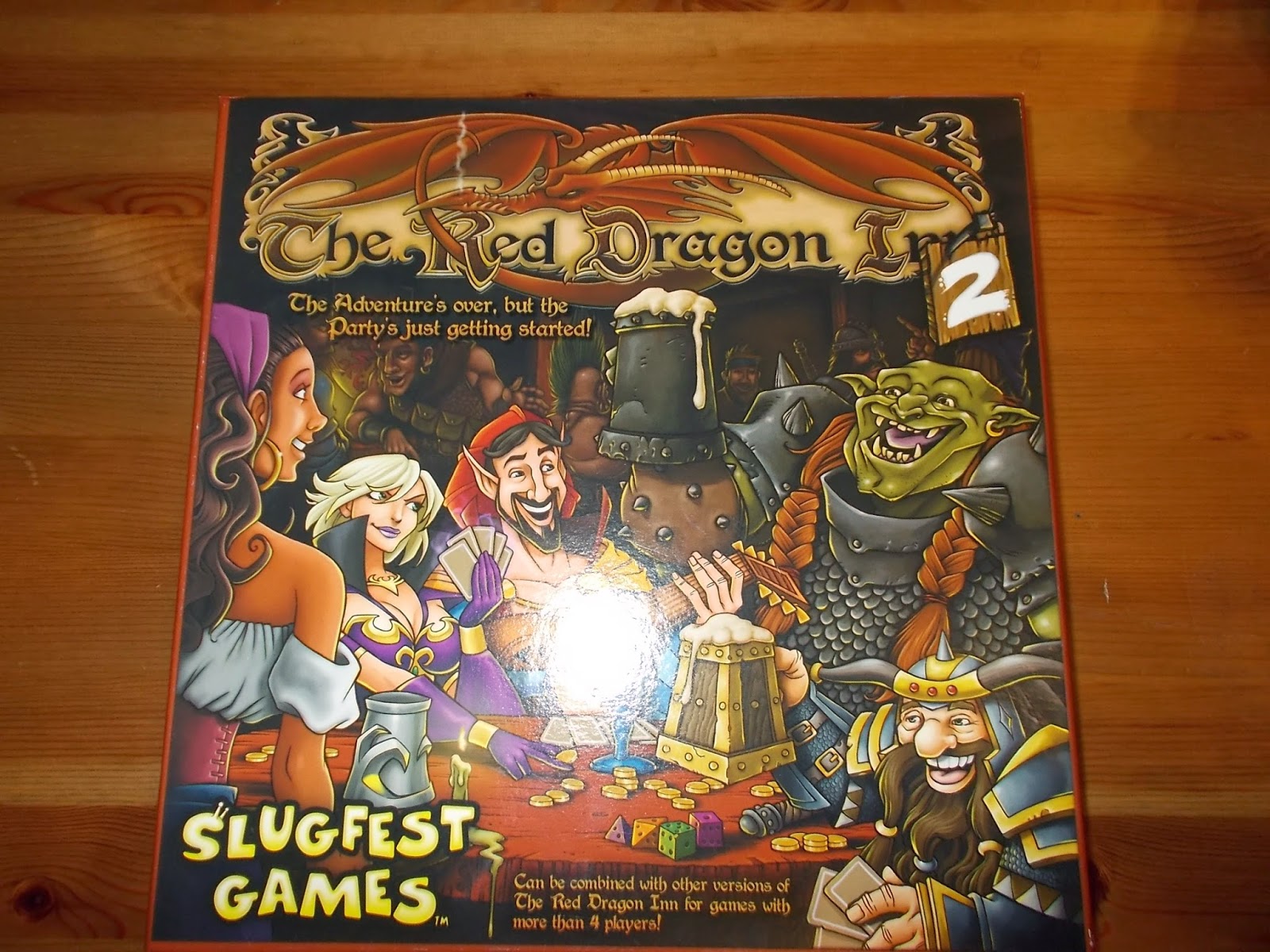 So what does every adventurer do after raiding the dungeon?  They go down the tavern and make the best use of all the treasure they’ve looted by drinking and gambling it all away.

However, it is the subject of a game from Slugfest, wherein every player takes the part of an adventurer that’s just returned from the dungeon in a race to see which one of them runs out of gold or passes out first...

Highbrow entertainment this is not J

In the game we played, there are four adventurers, Dimli the Dwarf, Gog the Half Ogre, Eve the Illusionist, and Fleck the Bard. 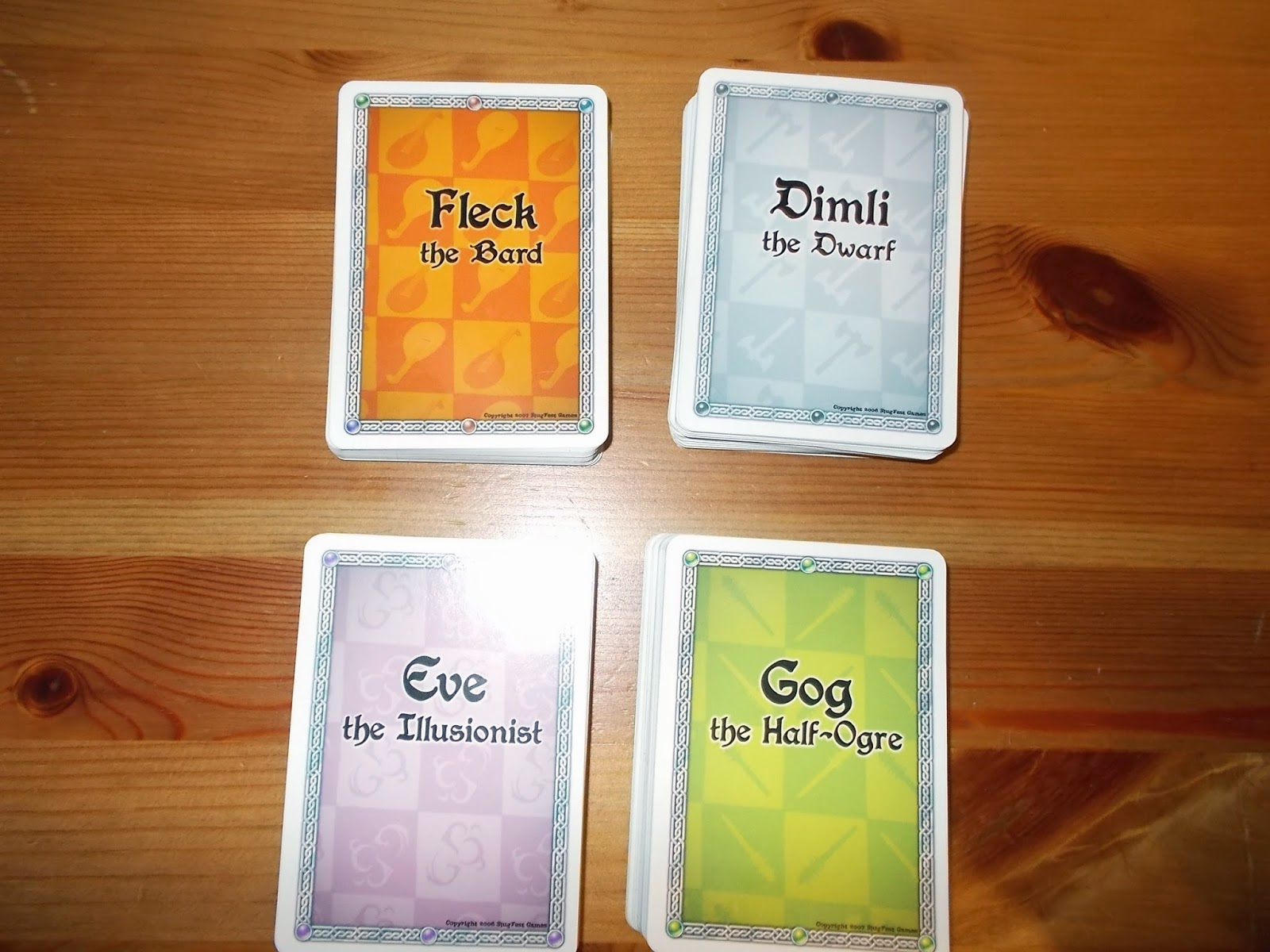 Not hard to see which character I picked.

There are two stones on the character board, a red one that indicates fortitude, a white one that indicates alcohol content, if the two ever meet, you’ve passed out and lose, if you run out of gold, the tavern wench throws you out and you lose. 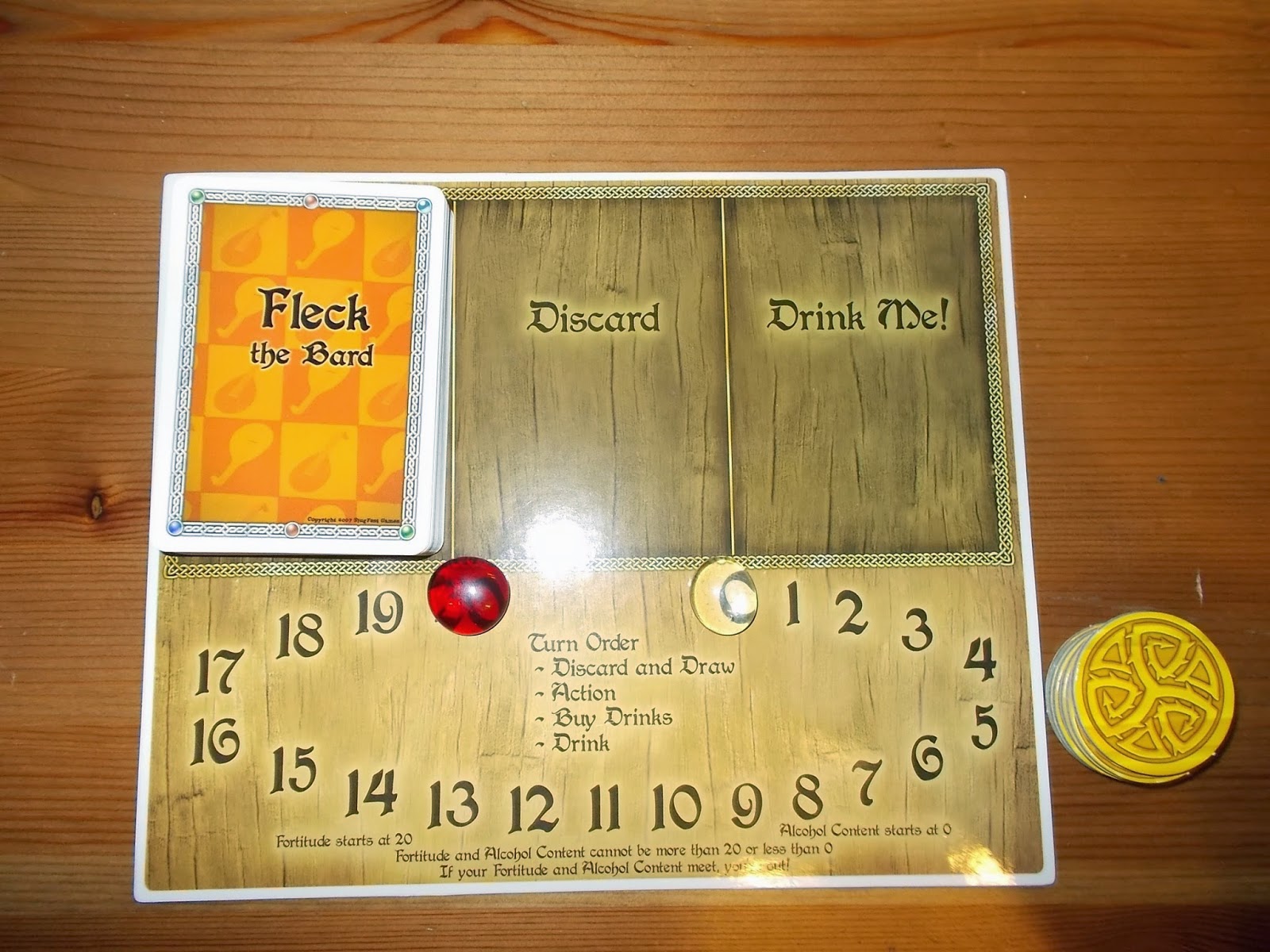 The game mechanics are simple, draw till you have seven cards at the beginning of the turn, play an action, buy someone else a drink and then drink your drink (if you have one).  Actions include starting off a round of gambling, taking things from other players, ordering more drinks, and so on, there’s not much variant in the different cards, most of them do simple things like cause the other players to lose fortitude or gain alcohol content.  There are interrupt cards that allow you to redirect fortitude loss and alcohol gain, and cards that allow you to ignore them completely.

When you’re gambling, whoever controls the round gets the pot when it gets back around to them, but the other players can play raises, winning hands, or cheat their way to victory, there’s even a card that allows a losing player to make the game a hollow victory by having the tavern wench steal all the gold in the pot as a tip. 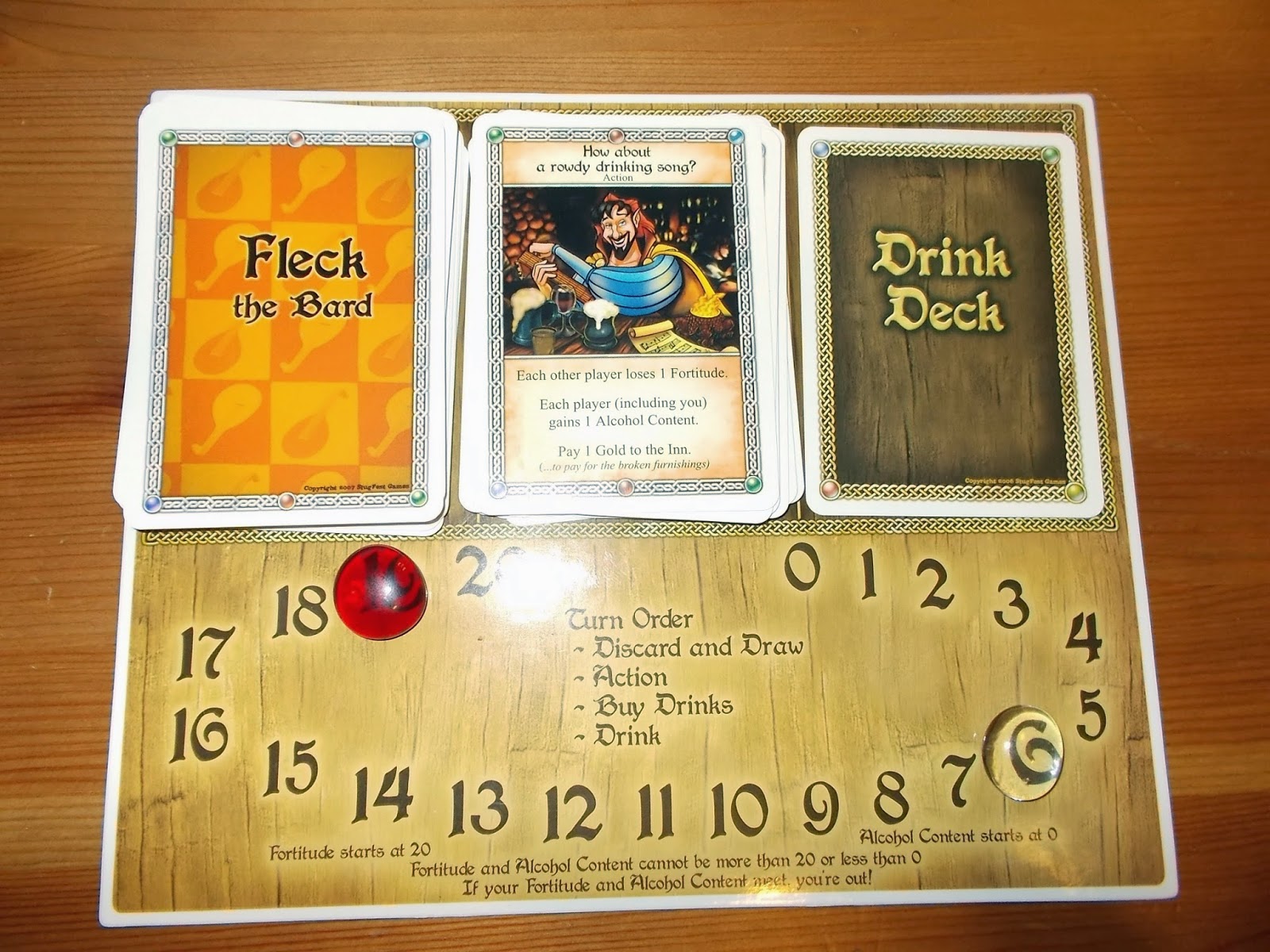 The game plays well, there aren’t enough rules to get in the way of things and those things that have a conflict on them are suitably easily worded enough to allow players to make a reasonable decision on them, the production values are good although the cards aren’t laminated (which, given the subject matter, you’d think they would have been), and it’s possible to play a game from new within half an hour.  I suspect that the game will work better for those who’ve had rowdy nights out and been the archetypal adventurers in the bar, but the game mechanics are sound and there’s enough variance in the cards that it doesn’t seem like you’re playing the same hand every turn. 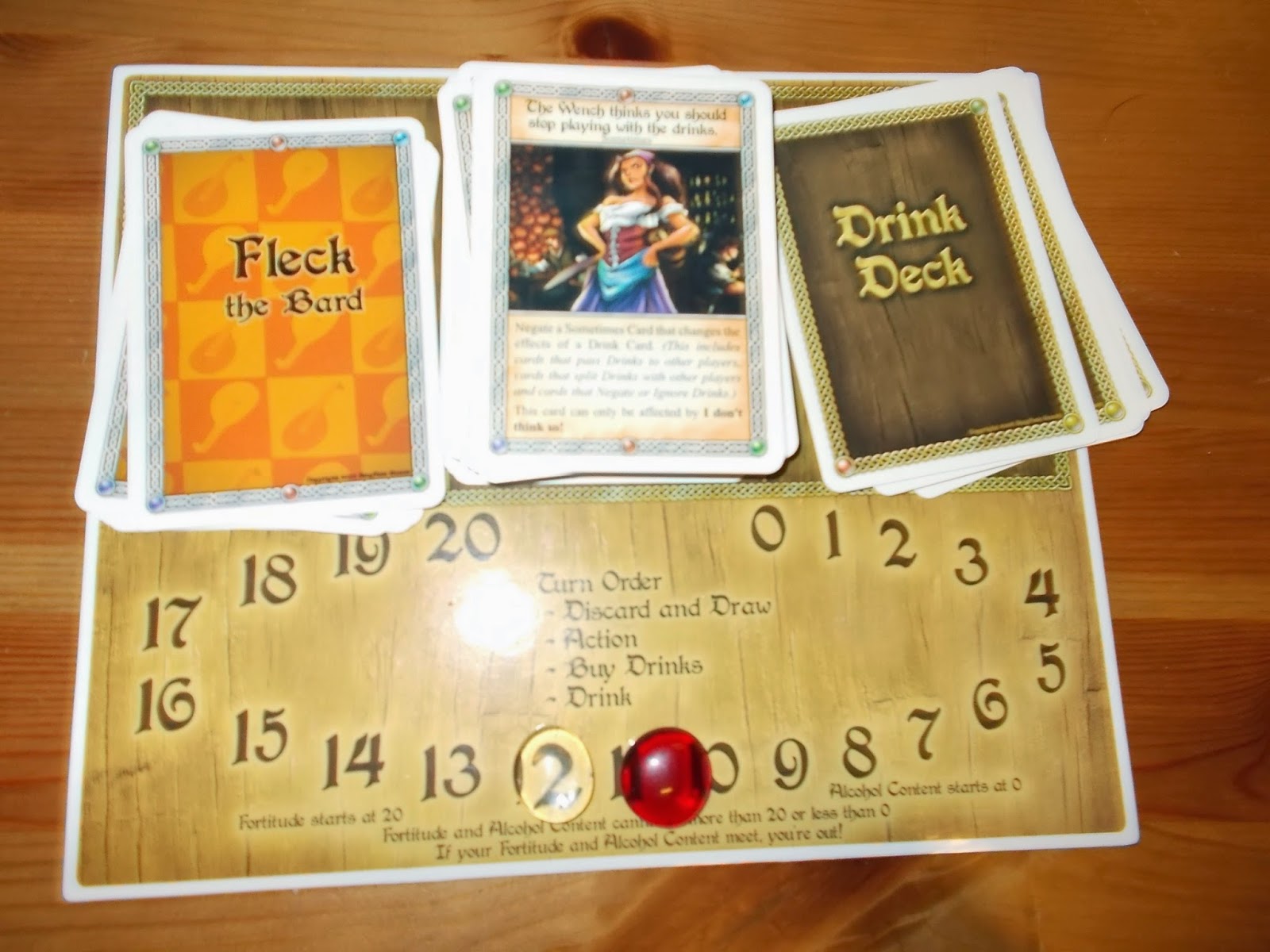 As of this time, there’s a total of four different expansions for the game and the rules for each of them can be found here http://slugfestgames.com/games/rdi/

There are also rules for Allies, including amongst others the rabbit from Monty Pythons holy grail and the barbarian from Runequest and expansions that indicate how to include taverns and such in your games of Pathfinder.

It’s not politically correct, and it’s not for everyone, but considering that our group is one teetotal, one party animal, one beerproof tank, and one "Drunk by sniffing it", we all found it fun to play.

Just as long as you don't swap the drink cards for actual drinks....