Last year I backed a kickstarter called the Agents 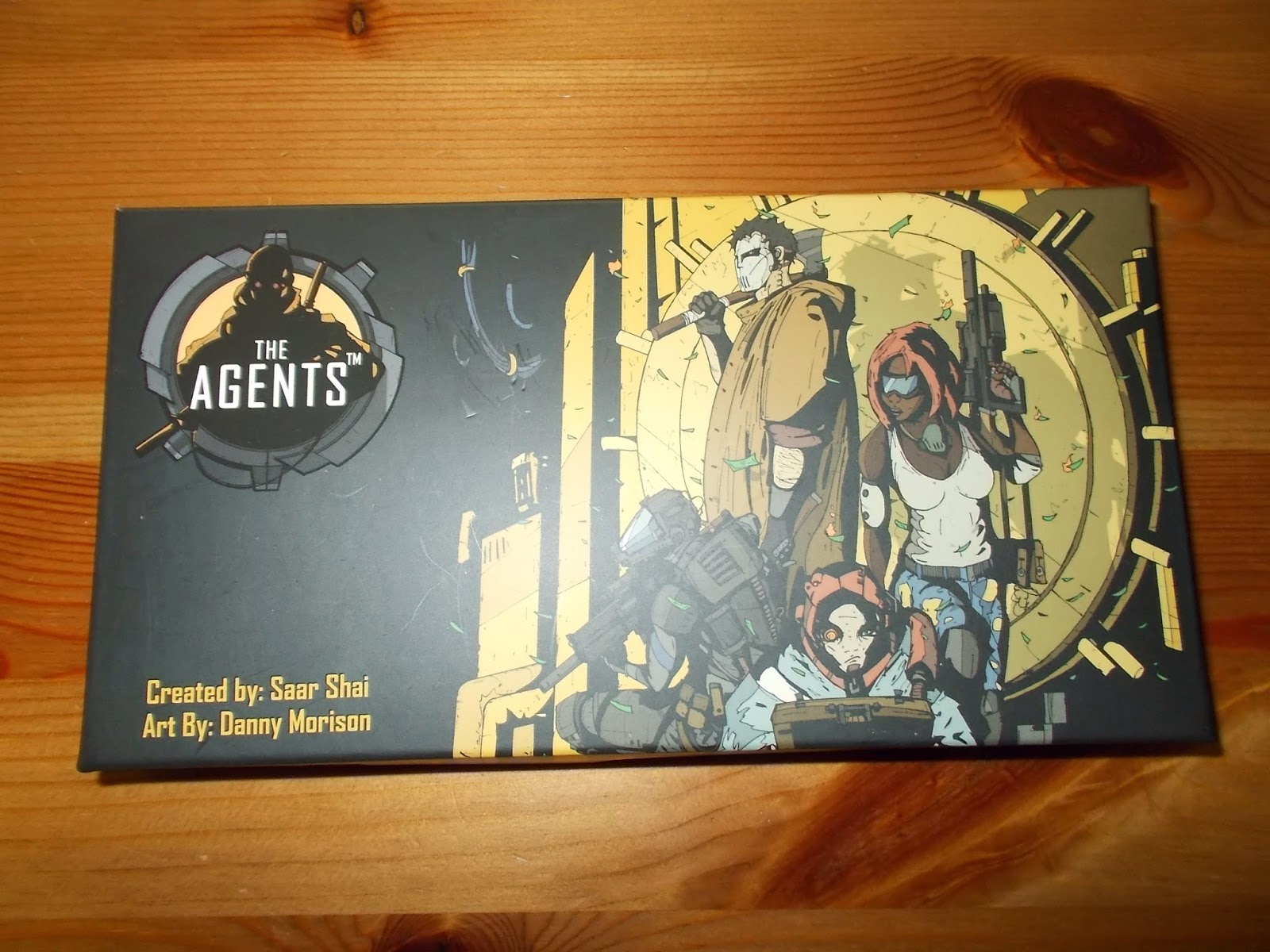 (https://www.kickstarter.com/projects/673576049/the-agents-a-double-edged-cards-game), in which you play one or more factions of specialists as the agencies that they’re working for are closed down and you battle to make the most of what you can from the different parts of the agency that are still remaining.

The premise is an excellent one, it’s quite literally Spy vs Spy made into a game that’s not on an 8 bit computer and with a significant amount more planning involved rather than just putting an electrified bucket of water over the door and waiting for the other spy to walk through the door.

When it first arrived, I have to say that the rules of the game did have me a little on the befuddled side and it did take some time to get the whole concept in my head before it worked.  I was not alone in this and cheerfully a second edition set of rules has been produced that are significantly less confusing and these are available for free at (https://www.kickstarter.com/projects/673576049/the-agents-return-the-double-edged-cards-game-is-b) half way down the page. 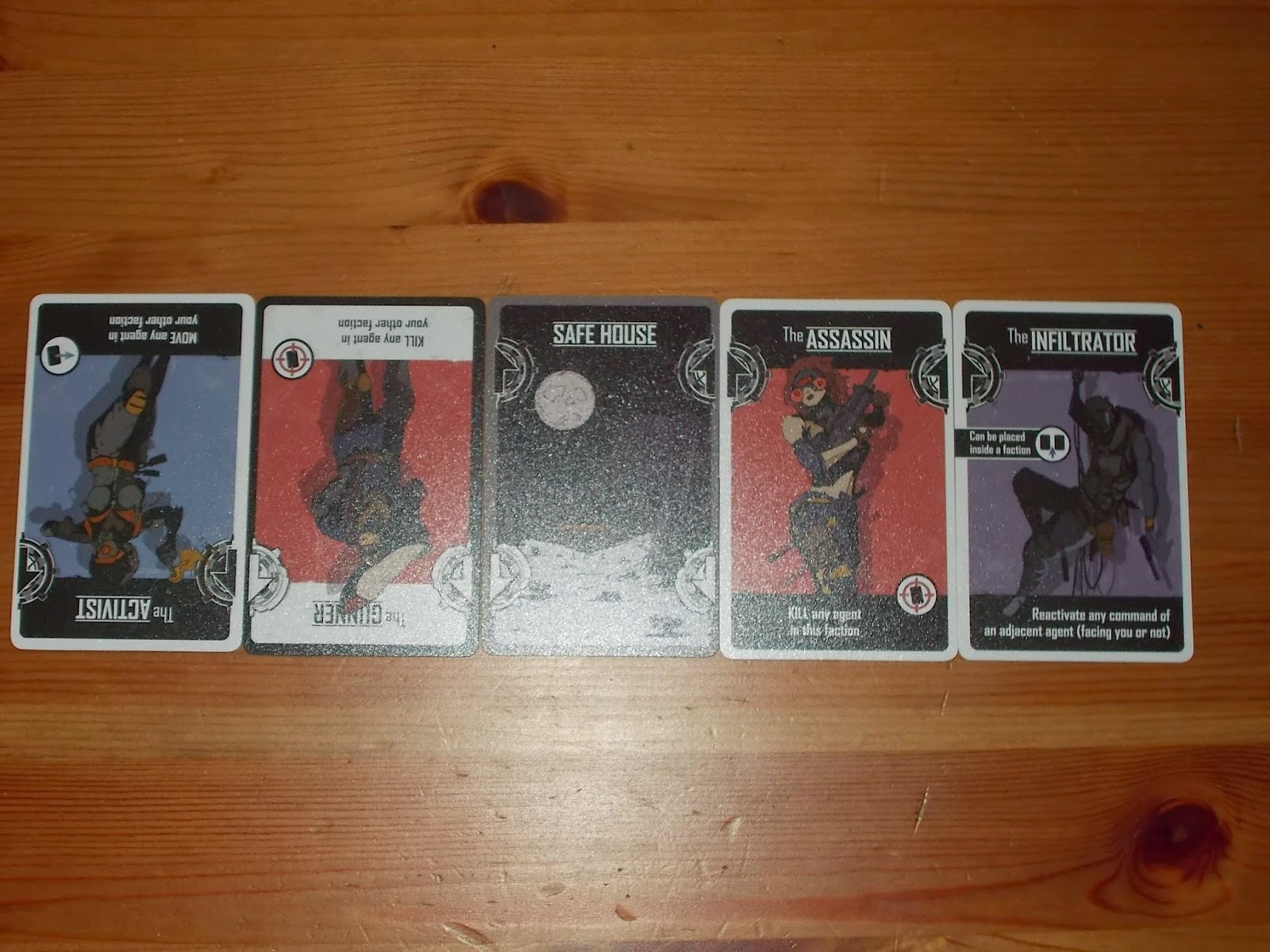 The restriction to this is that the points are only scored when the arrows on the cards line up and there are a number of cards that change the orientation of the cards while they’re in play, meaning it’s entirely possible to change how the game works within a single turn.  The other thing to consider is that’s it’s a points based game, so while you can spend all your turns just playing for the effects on cards, you’re not actually amassing any points, your opponent is, and that’ll cost you the game before long.  When you add Free agents into the mix that are played and then disappear, the benefit of getting more cards in your hand becomes readily apparent. 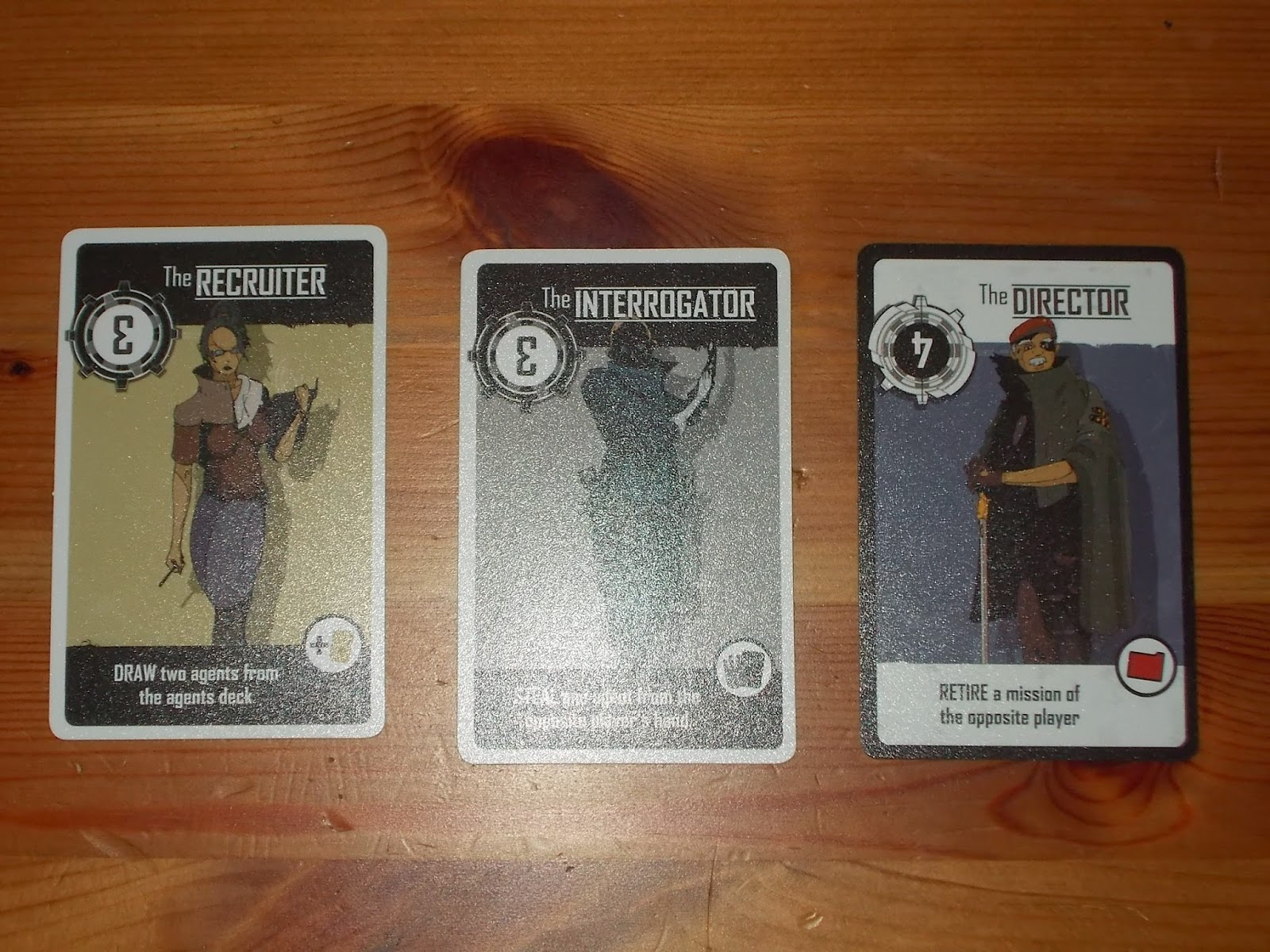 Simple mechanics make for an easy learning curve, but the game comes into its own when you start seeing the combinations within cards and the ways in which missions are not only useful but vital for the success of the various factions. The first game will take some time to play though as everyone works their way around things, but once you’ve played through, the mechanics of the game fall in to place fairly quickly and the next game can be played far faster.

Players take it in turns, most suspicious player gets to go first (I did like that…), and take two actions each turn, with the following actions available each turn.

1: Play an Agent to one of the factions or play a free agent.  When playing an agent, the command is resolved immediately and the points are scored immediately after the command has been resolved.
2: Use a command from a live agent that’s facing you (Presuming they’re not dead).
3: Buy more Agents or Missions
4: Trade in Missions or Agents to redraw an equal number from the respective decks.

You can only have a certain number of agents in any faction, so it becomes necessary quite quickly to replace and rearrange agents.  It’s not possible to leave a particular structure of cards in place as everyone can affect factions in one way or another, forcing the game to constantly evolve and change in the way that a war between spies would.  There are also commander cards that are included in the basic game that can be used to make a greater difference between what the players can and cannot do.

Once the players turn has ended, they collect the points for the agents pointing towards them and for any missions that they have succeeded in.  If they succeeded in a mission the turn before and left it on the table and it still has the success parameters in place, they score the mission again, but only an unobservant opponent would allow this to happen. 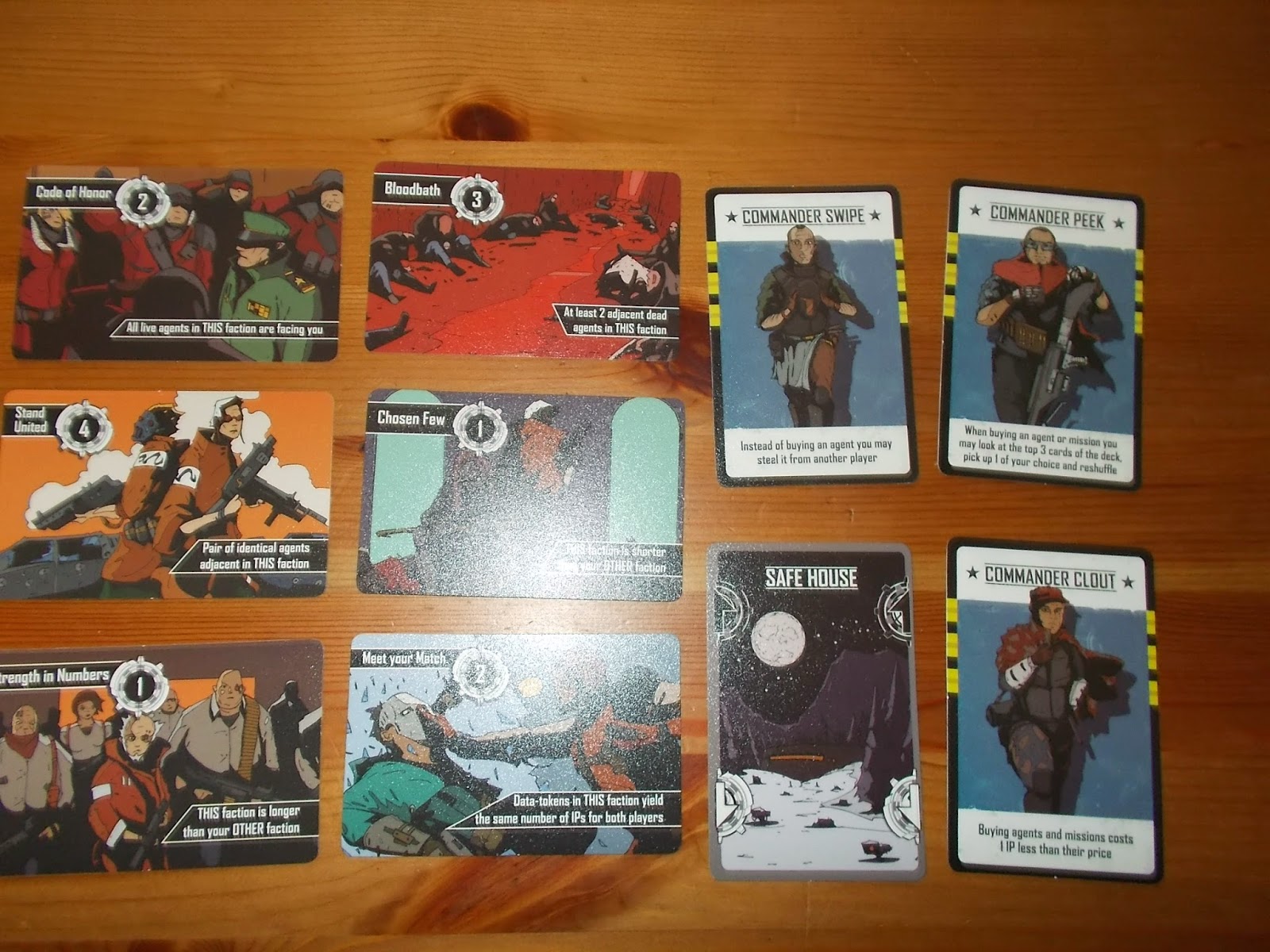 The game gets very involved when it comes to the trading and changing of cards, and for something that’s essentially a move and sort game at its base concept, the combinations have been very well thought through and the game becomes more involved as more people join in and start to mess with the others well laid plans.

The card stock (working from first edition here) is passable, there are some protrusions on each of the cards where a cutting machine has obviously been used, but the card stock is good and overall a good number of years could be had playing.  There’s been a second edition optioned and passed through kickstarter and I’m given to understand that there are still chances to get copies delivered.  At the point of going to press, there has not been a mainstream release of this game, but considering the success of the two kickstarters and the clear interest in expanding the game to cover the whole gamut of the shadow war, it can only be a matter of time before some canny publisher picks up on this and takes it under their wing.

The main website for the agents can be found at http://www.playtheagents.com/ 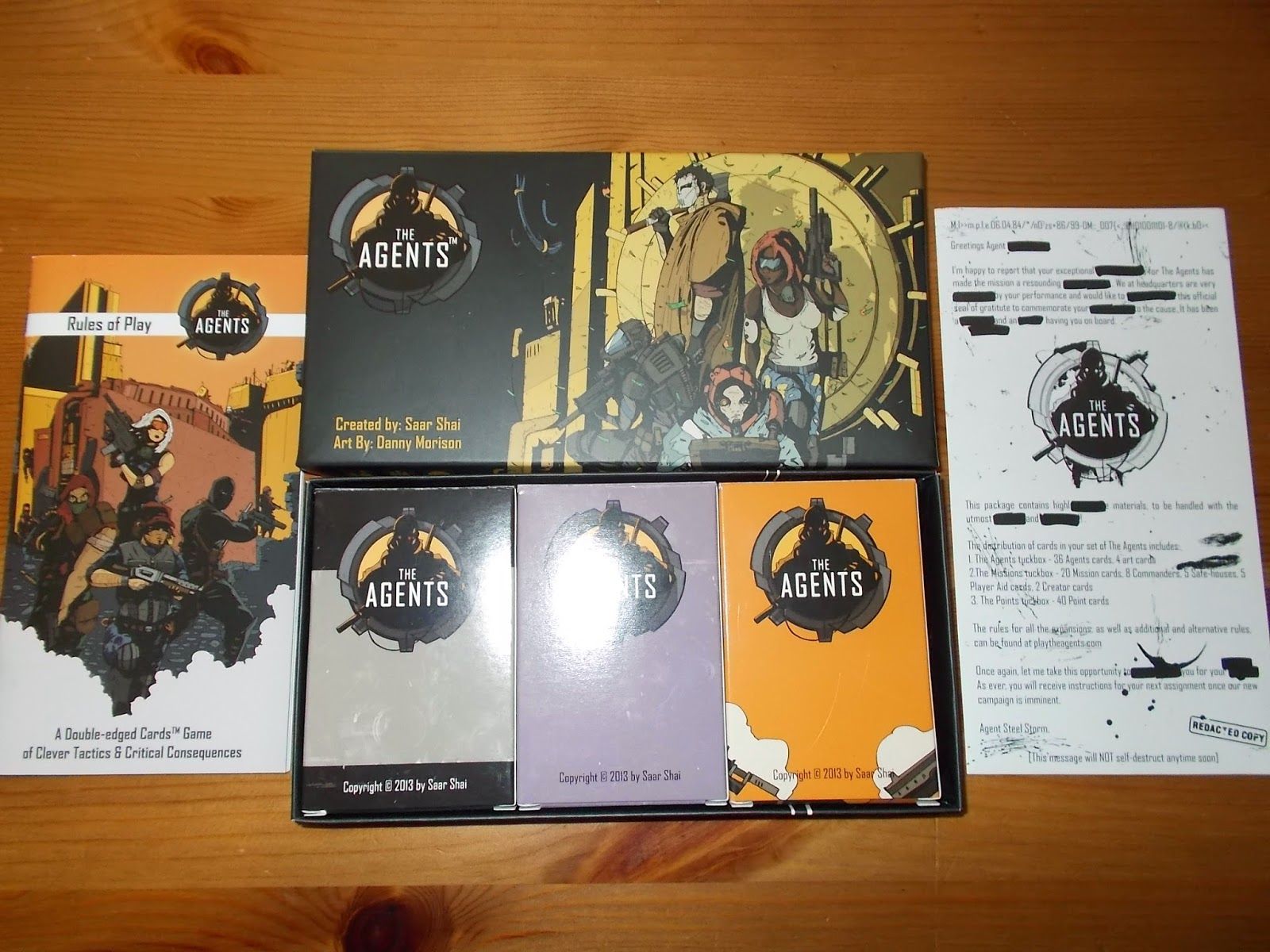 And in the meantime, I’ll be behind the door with the bucket of electrified water…
Posted by John Dodd at 09:51