I back more Kickstarters than I probably should...

I do back more Kickstarters than I should, but there are several reasons why I do that, not least of which is the idea that when I’m backing a product, I’m not just looking at it and going “Cool...”

I’m also backing it because someone somewhere has had an idea, they believe they can pull it off and they want to share it with the world, and I have a lot of time for that. I want people to aim for their dreams, I want people to put things out there and I’m in a position in my life where for once I don’t worry about the bills every month, I’ve got enough coming in to cover everything and then some, so ten dollars here or there will make little to no difference to me in the long term.

The simple question always asked is “Would it cost me less than dinner in the end?”

If the answer comes back “No”, I skip dinner and back the Kickstarter instead.

Yes, there’s been a few where the amount of money placed on the Kickstarter has been significantly more than dinner, but I’ll come to those when I put the reviews up.

Alright, so let’s get the main thing out of the way.

Which to be fair is half of the fight when it comes to new things, if it immediately grabs your attention, then chances are you’re going to pay it more heed than you would if it was called “Game Three”.  That was the first thing that got my attention, then there was the premise, there’s a machine that can predict with 100% certainty how you’ll die by taking a drop of your blood. Not when or where, but how, there was even a book that was made with the details (all twist endings) of how people would die and how they sought to avoid it and how it eventually caught them anyway.  The idea behind it was simple, the execution likely to be less so, and as a result, intrigued, I skipped dinner... Simple premise, you get a target, few pieces of Intel on the target, and a location.  You then draw three cards to determine what you’ve got to kill them with and then you set about executing the plan (and indeed the target).  The following shot is an example of the things that you can use to kill things, from equipment (Acid Spray) to allies (Octopus Neighbours), to the regular things, and the image is high resolution, so have a close look because every one of the regular things comes with a caption, the Blowfish is a particularly good one J 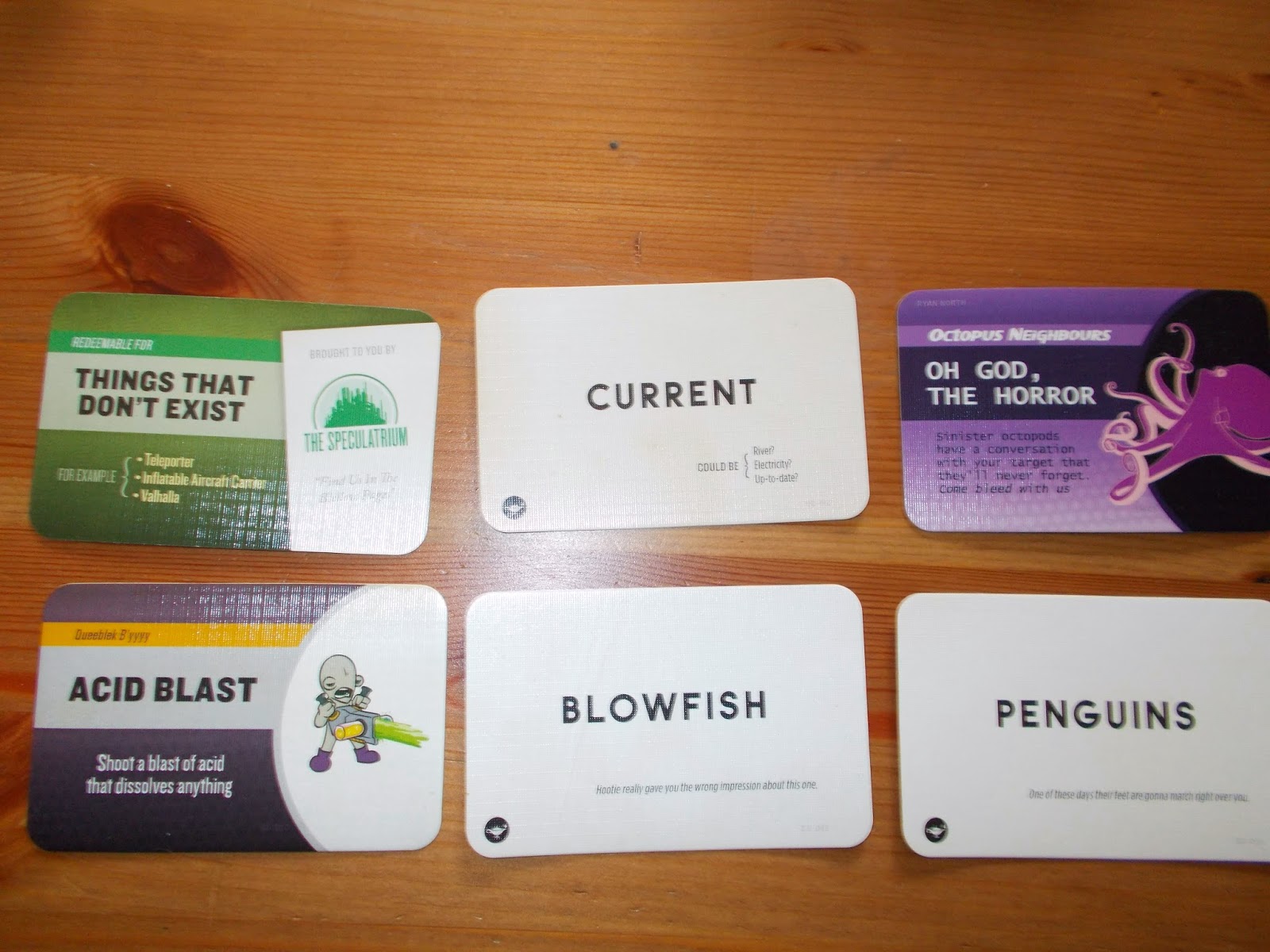 Included on the next image are three of the targets that we played through on the first game, there are whole campaigns of things listed for those who can’t come up with their own, but you’ll get through those quickly if you’re really in to it and there’s every probability that you will be. 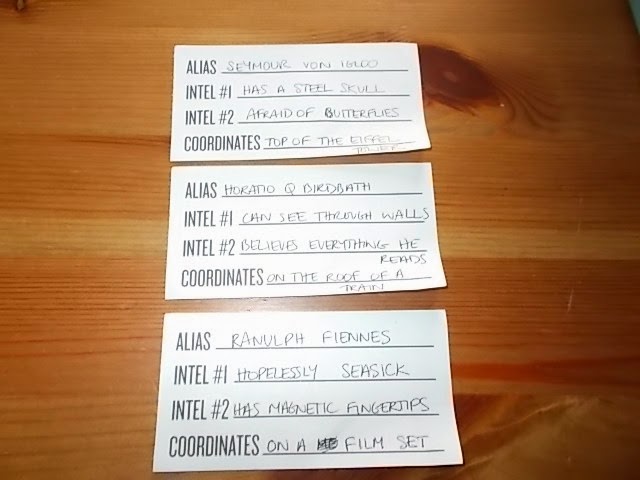 Once everything is in order and you’ve managed to figure out how you do it, you then assign difficulties to the parts of the plan and turn the egg timer to begin the hit.  It’s a co-operative game, so you could simply assign low difficulties to everything, but that’s not the point of it and if you’re the sort of person who likes to lower the difficulty so you have an easy game?

Why are you even playing?

Score equal to or higher than the difficulty to succeed in that part of the plan, an example would be if you’re trying to get the target to slip via a set of marbles, reasonable chance, but if you’re trying the same with a turtle, less so...

Succeed with all three parts of the plan and the target is dead, but that’s not the end of the hit, you’ve then got another 90 seconds to cover up the aftermath, with everything from destroying the evidence to catering at the targets wake.

For what is ostensibly a simple card game, the variety is massive, there are hundreds of cards out there and with the basic set, everything fits in the box (as indicated), but you’d need  a far bigger box to get all the cards to fit. 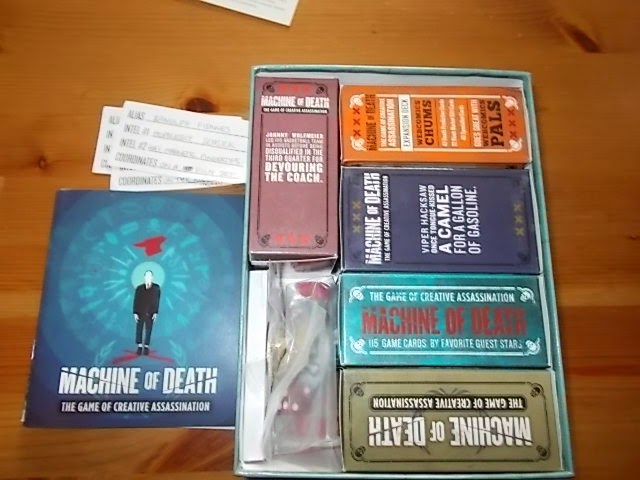 The whole of the game can be found at http://machineofdeath.net/ which includes the game manual itself, the mission book, and intel sheets.  You could easily play the game with just the things supplied on the website, but it’s so much more fun when you’ve got all the cards.

If you want the print version, you can find it at http://machineofdeath.bigcartel.com/

A lot of work went into this, with a great number of people contributing, and it shows when you look at the finished product, there’s a massive number of expansions and the game itself is tremendous fun, you’re not going to run out of cards and options any time soon and because you don’t go through them all at once, you don’t very often get the problem of “I’ve seen that before”.  Production values are very high and it certainly deserves to have a wider audience than it got with the initial release

So, in all, one of the best Kickstarters I’ve ever backed, and something I’d certainly recommend.

Of course, I should have a ratings system of some sort when it comes to these things, and after careful consideration, I've decided to go with the complex variant of Do buy or Don't buy...

In the matter of Machine of Death?