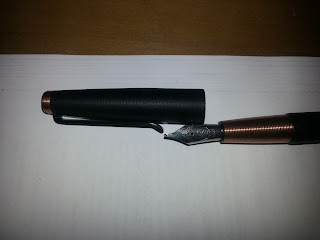 In advance, I would like to state that I haven’t purchased this pen, and that the copy I’m using was provided free in exchange for an honest review.

The TTG (Because I don’t want to type the words out a few hundred times) is an interesting innovation, taking the form of a regular piston refill pen and then making subtle changes to the barrel and weighting of it to give a unique feel and heft to it, things which we all know are essential in the enjoyment of a pen.

This is the first pen I’ve encountered where the actual feel of the pen has been considered to be an element in the selling of it, I know that I’ve spoken in the past of the feel of a pen, the requirement of it to feel right on the page, so the nib doesn’t scratch, and it sits comfortably, but this is something new.

To put that in perspective.

The TTG has the feel of being made up of several concentric rings of carbon fibre, I don’t know what the actual construction of it is, but I know the feel of carbon.  The rings are small, each one less than 1mm in depth, not enough that they distract from the use, but equally not so small that they feel like a file on your fingers.  It’s a screw top with a copper top, and both the cap and the back of the pen are very light. 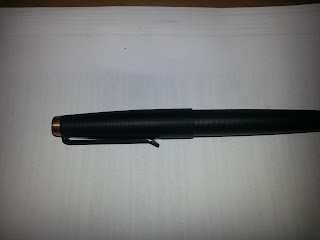 I suspect that this is because the pen couldn’t be too heavy to use, and given the weight of the nib and barrel of the pen, they would have had to save weight somewhere, and it certainly wasn’t there...

Which brings us to the nib and barrel...

Real Copper from the feel of it, heavy, cold, solid.  Again with the same ribbing to the construction, machined perfectly to a fine barrel, the piston at the back is a very good size, and the nib is a genuine Bock steel.  When writing, the weight of the pen at the front gives inclination to press harder, which in turn increases the flow and so on, so writing with it is very easy, there’s no fatigue to be had even when writing for long periods of time, and that’s where the feel of the pen comes in. 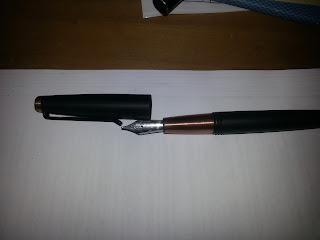 Copper is a good conductor, and I suspect the metal wasn’t chosen at random, when you’re writing with this, there’s a feeling, almost like rubbing two pieces of cloth between your fingers.  I can’t describe it any better than that, your fingers hold to the barrel, but there’s no give in it, so you can grip it wet, dry, doesn’t matter, it still feels sturdy and well mounted.  The curious thing is that if you have an unyielding grip when writing (so your hands stay in the same position and you don’t fiddle with the pen), then you’ll be fine.  If, however, you do fiddle with the pen, the grip caused by the barrel causes the pen to ride up into your hand with every movement, which means that within seconds, you’re holding the nib and not the barrel.  Not an entirely unpleasant sensation, but certainly one that needs some working with to get used to.  If you’re a heavy writer, this pen will be perfect for you, if you prefer something lighter, give it a test before you buy it. 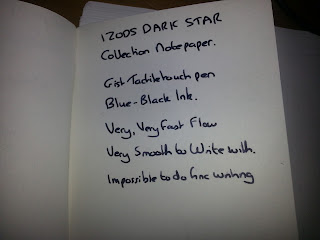 When you’re writing, you have to write fast, the nib and barrel flow fast, in the way that a train does, you can’t slow down with it, and you certainly can’t rest the pen on the paper.  I suspect that given other, thicker inks, you might get a finer line with more detail, but given what I was working with (and more on that paper later), this just wouldn’t stop writing.  The ink laid down thick, no gaps in the line, but that meant it was very thirsty, and I wouldn’t use this on anything less than good quality paper, on even slightly absorbent paper, it would drink the cartridge dry in no time at all.
Overall, I like the pen, it wouldn’t form part of my every day carry, but it makes for an interesting occasional writer, I could easily see it being used as a journal pen, but the way the barrel has been designed doesn’t make for everyday use.  Aesthetically, it’s beautiful, seamless lines and strong construction all the way through, the refill seats perfectly, and there’s no leakage from the nib if left upside down.

Bold experiment, I’d be interested to see what they try next.