A question of the Dice we use for games...


In the most part, I'm not a fan of specialist dice.  I don't like that you can't play the game without the aforementioned dice (well, you can, but it's a significantly slower process) and that if you need more dice, you have to go out and get more of them.  However, I am an inverterate collector of Dice and take great enjoyment from new dice, particularly ones that are different to the regular size and shape dice that everyone has sets of.

This is an ongoing quandary for me, I very much like dice that have purpose and are different from the norm but can still be used for other games, and I have a general dislike for dice that can only be used for one purpose.

There are a few notable exceptions 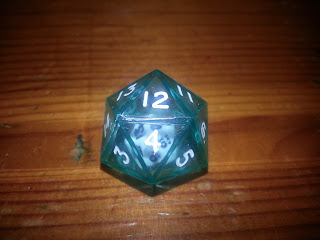 Before I started working for Modiphius, I already had a number of Double D20 dice in hand, not because I'd heard of the 2d20 system, but because they looked cool and could be used as regular D20 as well as double D20.  Since starting to work with Modiphius, these are my default when demonstrating the system because they draw attention to the mechanic used as well as being interesting to use.


No secret that my favourite dice type is the D6, I believe that it has universal appeal even beyond dedicated gaming circles and is one of those things that everyone knows about, but even so, there are a number of times where new types of D6 will get my attention. 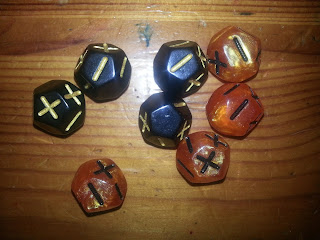 Fate/Fudge Dice are essentially a D3, but those don't roll well, and part of the attraction for me in dice is having something that makes a good roll on the table rather than clunking twice and landing. 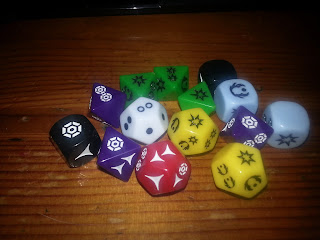 Where I have problems is with dice like the ones used in the Star Wars RPG, where the numbers are substituted with symbols. I understand why it's been done, but I believe that the system could have been designed to work with numbers rather than symbols, especially where the stats are given in terms of numbers.  Continuity is the way forwards as far as I'm concerned.  I know a lot of people like the system, but for me it's just a difference that didn't need to be be done. 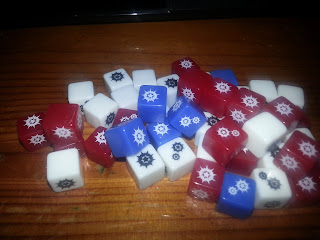 Conversely, the dice used for games like X Wing and Monsterpocalypse are very useful, and the difference I enjoy here is because those games are literally about rolling the dice, not just rolling the dice occasionally to make a skill roll. 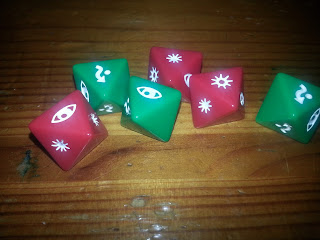 There are those who will argue that if the dice are fit for purpose, then what's the problem, and to some extent I understand that perspective.

The point at where specialist dice have a purpose for me is when you're rolling massive numbers of dice and totalling individual results, and even then, when you're rolling regular dice, the totalling of results can be done just as easily, but it becomes a more visual stimulus when the results come rolling on to the table.  Of course, I've been playing things like 40k for years, so picking results out of whole trays of dice comes as second nature, and maybe I've gone Grognard on this, but I'm just not seeing the need...