Book Review - Longitude – The true story of a lone genius who solved the greatest scientific problem of his time. 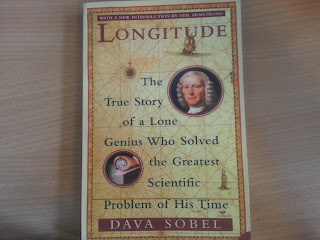 Not well known of my interests is that of the oceans of the world, I do not speak much of it and given that I live in a landlocked area with little chance to happen upon large bodies of water, I tend to reserve my enthusiasm for those times when I can give it full vein.  Another of my interests is in watches, not just the quartz disposable’s I had when I was younger, but all manner of horological devices.

I saw Longitude on the shelves of a friend at Goodreads, and the title drew my attention, one cheap copy later and I started to read through.  It tells the story of John Harrison, creator of the Harrison clocks and his ambition of making a mechanical time keeping device that would hold the time on prolonged sea voyages, something that the existing pendulum clocks would never be able to manage and thus requiring a whole new science to be developed and tested in the most strenuous conditions.

And of the problems that beset him in this endeavour…

I like the style in which the tale is written, it’s a factual account, but it’s told without embellishment (as indeed history should be), and laid out in plain language that avoids referring to the technical nature of the works being carried out and instead focussing on the human element of the book.

John Harrison was a man who sought to win the prize offered by the Longitude Act of 1714 for working out a way for ships to be able to navigate across great distances on the ocean without becoming turned by the waves or left without hope tens, sometimes hundreds of miles from the point they should be.  He trusted in the nature of mechanical excellence over the imperfect method of navigating by the stars.  Along the way, he was beset on all sides by those who were too invested in the older methods (as indeed most who suggest something new are) and had to pass many tests before his science was accepted as it should have been.

It is apparent from reading the book that Dava Sobel’s sympathies lie with John Harrison, and even in his failings, he is shown as a man driven by a dream being assaulted by the establishment at all times without anyone to champion him.  The greatest achievement of the book is that you walk this path with him, and while there is clear bias, it gives you the inclination of what it must have been like to be challenging the order of things at that time and you find yourself willing him on to succeed.

If history lessons were written more like this book, more people would seek to learn of what happened in times past, this is an excellent book and one that I would recommend.
Posted by John Dodd at 15:02