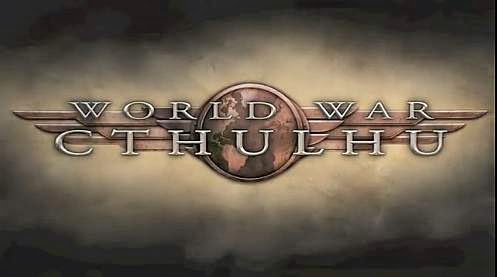 Seventh Offering, and interestingly enough the counterpoint to yesterdays offering, World War Cthulhu: The Darkest Hour from Cubicle Seven.  Based in the same time and with ostensibly the same enemies to face, WWC presents a significantly different viewpoint.  In this game, the enemy is precisely what it is, an unspeakable thing that humanity has neither concept of nor defence against.

Suffice it to say with the exception of the subject matter, there's no common ground between this and the other game.

WWC contains everything you need to run the game, from the generation of Investigators to the background of the game, a full keepers handbook and a scenario at the end of the game.  The focus level is close and the level of play is gritty, there aren't going to be any encounters in here where you punch a Hound of Tindalos out, and the game makes no apologies for that. Played closer to classic Cthulhu, Investigators in WWC play the part of operatives working under the supervision of a man called N who is carrying on a one man crusade against the Mythos with a number of resources from the British military and government behind him.  It is not clear as to who N is or just what his part in everything is (there are a number of possibilities listed for those who want ideas), only that he has power to command the use of others and he has a vested interest in preventing the Mythos from encroaching on the world any further.

Character creation is expanded from the original CoC, with backgrounds, new character classes and ways to integrate beginning characters into the world before they even come to the table.  Unlike the basic CoC game, this also gives a starting point, how the Investigator first came upon the Mythos, and what their motivation is regarding it.  This proved very popular with our younger judges as it got the players right into the game with a minimum of delays.

The Keepers section covers how to set up missions, a geographical gazetteer of the places where missions might take place, and equipment that the Investigators can requisition or obtain.  It also contains a comprehensive section on how most engagements are handled using military tactics, which proved very useful for those judges who had less interest in that particular field.

The Campaign included will keep a group of investigators occupied for a few weeks of game time if they know what they are doing and longer if they don't, but rather than give away the secrets of the campaign...

We now move to the judges comments.

World War Cthulhu is for Cthulhu Purists everywhere, it's dark, deadly, and in this war, the only thing that's not on rationing is the Mythos.

The improved and expanded character creation process is very useful for drawing the party together before the adventure starts, it lets you build a sense that the investigators aren't just random bystanders who just happen to know of something strange out there.

An excellent resource on the war itself as well as the tactics used, it allows a keeper to make engaging scenarios with little prior knowledge of the war or the mythos.

World War Cthulhu: The Darkest Hour is available from Cubicle Seven directly at