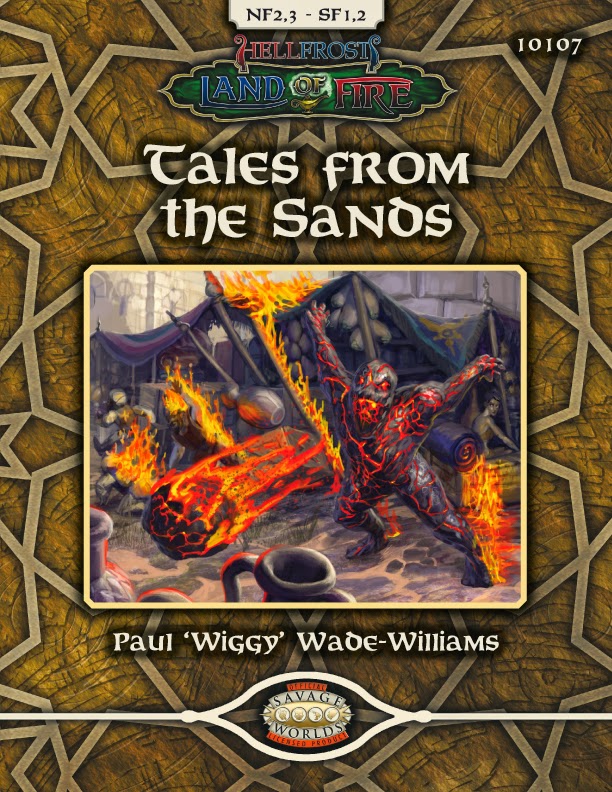 So, Day four and the offering this time is not a game by itself, but rather a set of four individual adventures.

Darkness at Darshah, a small village beset by a terrible evil

Reign of Fire, in which the heroes must prevent the land from being consumed by Fire.

It's written for the Savage worlds game set in the Hellfrost: Land of Fire setting.  Unfortunately, there's not much to say about the adventures without giving away a lot of the details regarding them, they all draw from creatures and tales of legend and they're all mechanically sound.

I say mechanically sound because there's a lot of statistics in here, the adventures are plotted in a similar vein to those done in the early to mid eighties, a small preamble followed by maps, lots of creatures, goodies to plunder, and a resolution.  It makes for simple reading and easy reference, there are maps for every part of the scenario (including the study of someone in case the players wanted to break out the battlemaps for searching the study).   Attention to detail is high, but there was the feel that a lot of the maps were just there to break up the outline of the text, which is understandable, but when well done, it provides an unobtrusive break and something to look at.  When there's a random map in the middle of the page, it begs the question of why is it there?

The Darkness of Darshah scenario is two maps with the details of the contents of the maps listed afterwards and cursory notes regarding what's going on, many references such as "It's not possible to list everything that could happen and here's where your skills as a GM come into play," indications to fudge the dice rolls to stop the players doing things and in general, quite a lot of Do it yourself.

From a games system, we understand that, when it's a scenario, you're providing something that the GM can take in lieu of doing their own preparation, so there should be background, notes on adversaries, reasons why the characters should be out there doing things, and in general, a reason for the scenario to be, not just a map and "Have at it"

Full colour on the front cover with black and white throughout, the images are well drawn but there are a lot of maps and comparatively few images in it.  One of the judges pointed out that deck plans of a ship are not the ship as seen from above but actually plans of the decks....

And that brings us to the Judges comments...

It harks back to the days when a map to find the monsters, a lantern to see them and a sword to slay them by were the cornerstones of adventuring, and for those who still live in those golden times, it's a good product.

As stand alones or diversions from the main campaign, the scenarios work well.  It would have been good to have something that linked them into a mini campaign.

Well laid out, lets GMs get straight into the action without much preamble.

Hellfrost: Tales from the Sand is available from their website directly at

http://www.tripleacegames.com/store/hellfrost-land-of-fire-products/land-of-fire-tales-from-the-sands/
Posted by John Dodd at 01:04