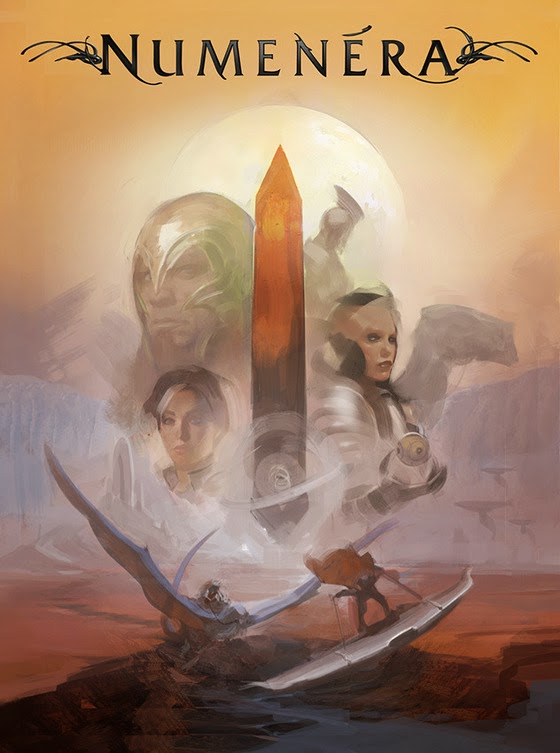 Fifth Offering and this time it's Numenera, the new offering from Monte Cook Games. Set in a world where there have been eight previous worlds all living upon the surface, civilisations that rose, grew, and eventually shattered under their own progress.  What remains of all these previous civilisations is the world in which the players find themselves.  It's impossible to begin to chart what such a world would look like, but they've given it a damn good try.  The main book has most of the world listed and catalogued within it and to put some scale on that, the main book is 416 pages long, full colour layout, excellent production values and teeming with artwork both relevant and beautiful.  The world section alone is a hundred pages, all the areas are thought out well, there's interesting things throughout, the creatures range from easy kills to abandon all hope and throughout there's a sense that there's always more just around the corner.  From a purely layout and artwork front, it trumps almost anything else we've ever seen.  There are a number of adventures in the back and a large amount of advice on how to be a better GM.  On the surface of it, it seems perfect...

So why did were the judges so divided upon it?

The game system is radical in a way that most game systems aren't, it allows the players to make sacrifices of their character, to push them harder than they thought possible in order to make the difference to the game.  Such a sacrifice may leave the character massively vulnerable, but it will allow them to make a move that simply would not have been possible in another system.

This has both good and bad points, and is best summed up by a comment from within the book (Page 330)

"When talking about rules, sometimes people will toss around words like 'Game Balance' or refer to rules as 'Broken.' These concepts belong in games where players build characters using extensive rules and make a lot of choices and then pit those characters against specific challenges to see how they fare. Because Numenera isn't about matching against challenges or advancing characters through conflict, these concepts do not apply.  If something seems broken, change it."

This is where the judges were divided, deciding to disregard the rules is not a decision to be made lightly and most beginning players would be hard pressed to make the call on whether or not a rule is immediately broken.  Our experienced judges understood that the rules can be changed or broken on a regular basis, but most of them have been playing for many years and so were used to doing that anyway.  Amongst the beginning roleplayers on the judges panel, there was some consternation as many of their players chose to play one particular character class because it offered significant advantages in the early stages and at later stages has the ability to control minds and move mountains, something the other character classes simply cannot match.

And this brings us to the Judges Comments

Visually Spectacular, a deep engaging world filled with life and possibilities, a rules system unlike anything we've ever seen before.

Immense and grandiose, a dream brought to life in technicolour with enough to keep any group occupied for the length of their gaming career.

Not balanced and surprisingly unrepentant about it, time will tell if this is a good thing or not.