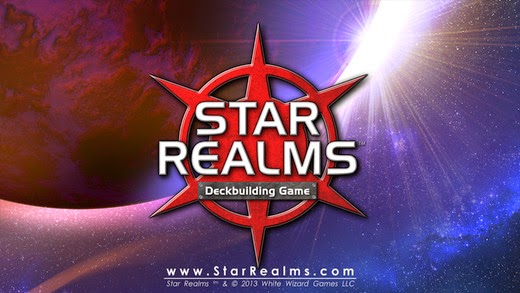 I’m a latecomer to Deckbuilding games in general, it was only last year that I came across Dominion, and that was my introduction to the concept.  I have to say that as far as game ideas go, I really like that both players are working from the same deck and have access to exactly the same resources at the beginning of the game.  The only problem I ever had with Dominion was that you didn’t really know who was winning till you get to the end of the game and tally up the points, so you don’t tend to adjust your strategy to reflect that.

There is no such problem with Star Realms 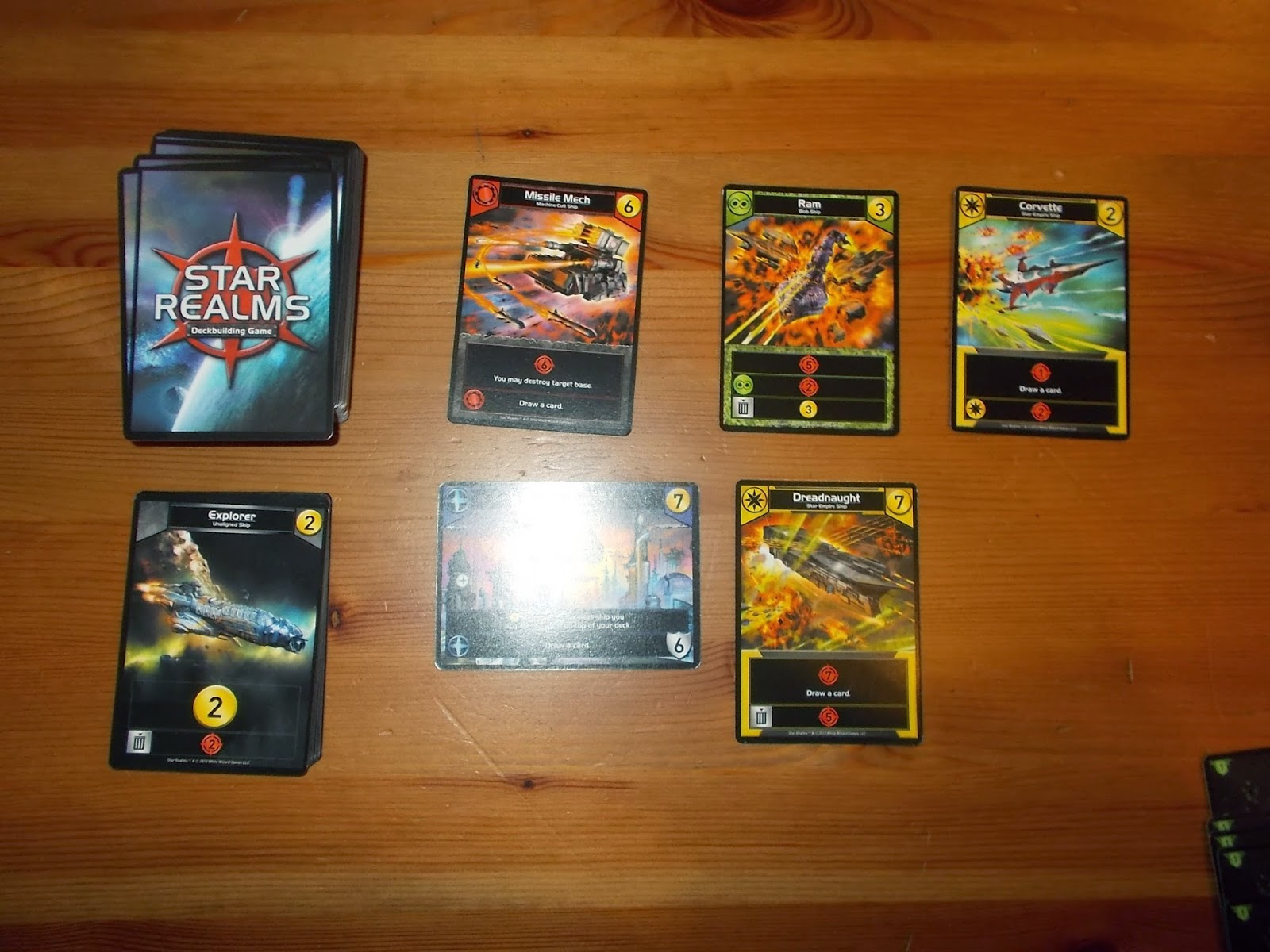 Star Realms is a two player deck building game that has all the cards you’re going to need in the base set, it works on a similar premise whereby players buy cards from the centre of the table and build their deck up to do what they want, but instead of victory points being placed within the deck, the winning criteria for this game is reducing the opponents Authority (Hit points) to zero.

The mechanics of the game are almost identical to those of Dominion, players start with two vipers and eight scouts, vipers do a single point of combat (damage) and scouts provide a single point of trade.  Players start with a hand of five cards, they get to buy as many cards as they can afford in the turn, then play any combat effects, then discard all their remaining cards and draw another five. 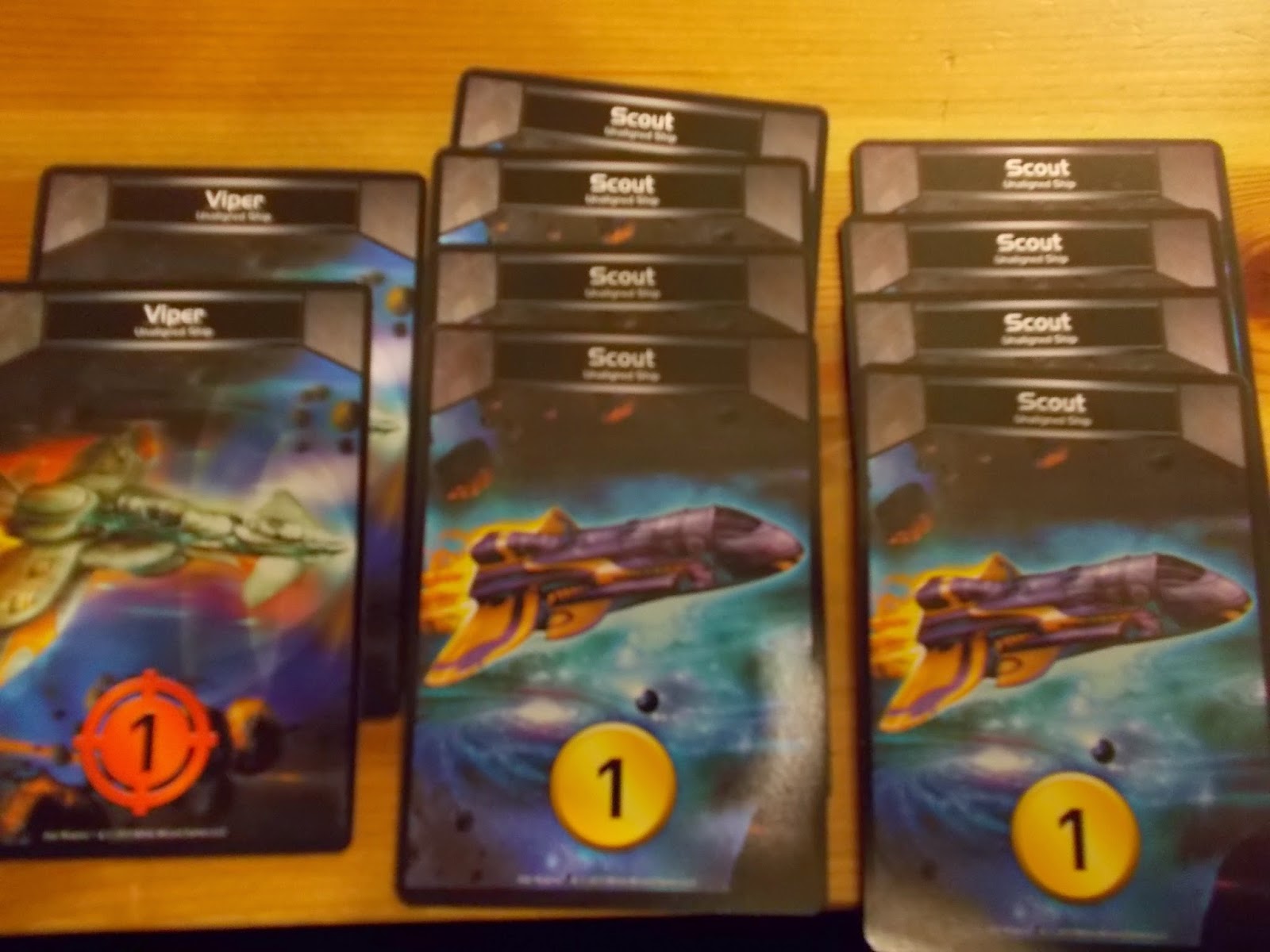 There are some subtle difference to Dominion in the way the game plays that suit the style of the game very well, the first of which is that there’s no limit to the number of cards that you can buy in a turn, if you have the trade points available, you can keep buying till you run out.  There’s a pile of cards separate to the main deck which is made up of Explorer ship cards.  These are worth two points of trade rather than the one of the scouts, so there’ll always be things that can be bought at the beginning of the game, even if the cards drawn from the main deck are initially too expensive. 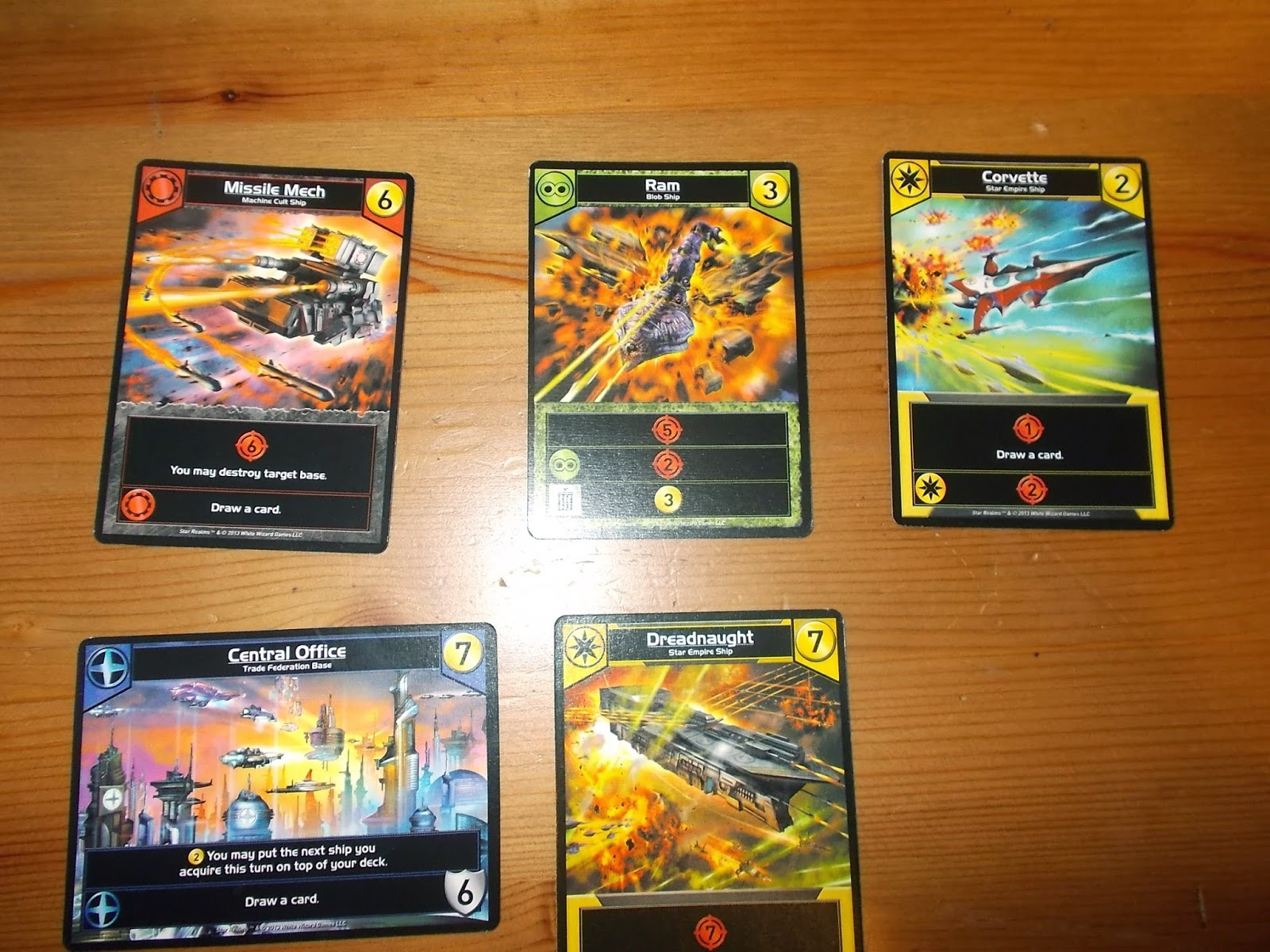 The main deck consists of ships and stations, with each faction having a particular focus towards how that faction is played and what it will work well with.  No card has a play cost, if they’re in your hand, you can play them, ships go into your discard pile when you’re done with the turn, but stations remain to be used again and again.  The only defensive measures you’ve got against incoming fire from the other player comes in the form of outposts that absorb a certain amount of damage before being destroyed.  When destroyed, the outposts go back in your deck and will eventually come around again, but you have to balance carefully your offense and defense.

Most cards have more than one function to them.  All cards have a main effect, and that effect occurs whenever you play the card, but many cards also have an Ally effect and/or a scrap effect.  Ally effects come into play if you have another card of the same faction out at the same time, and scrap effects can be used at any time, but to use it, you have to put the card in the main deck discard pile, not your own, so you only ever get to use it once.

The trade pile always has five cards in it at any time, as soon as one is bought, it is replaced with another from the main deck, and there’s no danger that the main deck will run out before one side has battered the other one into space dust.

There are four factions within the basic decks, each one having a different style of play 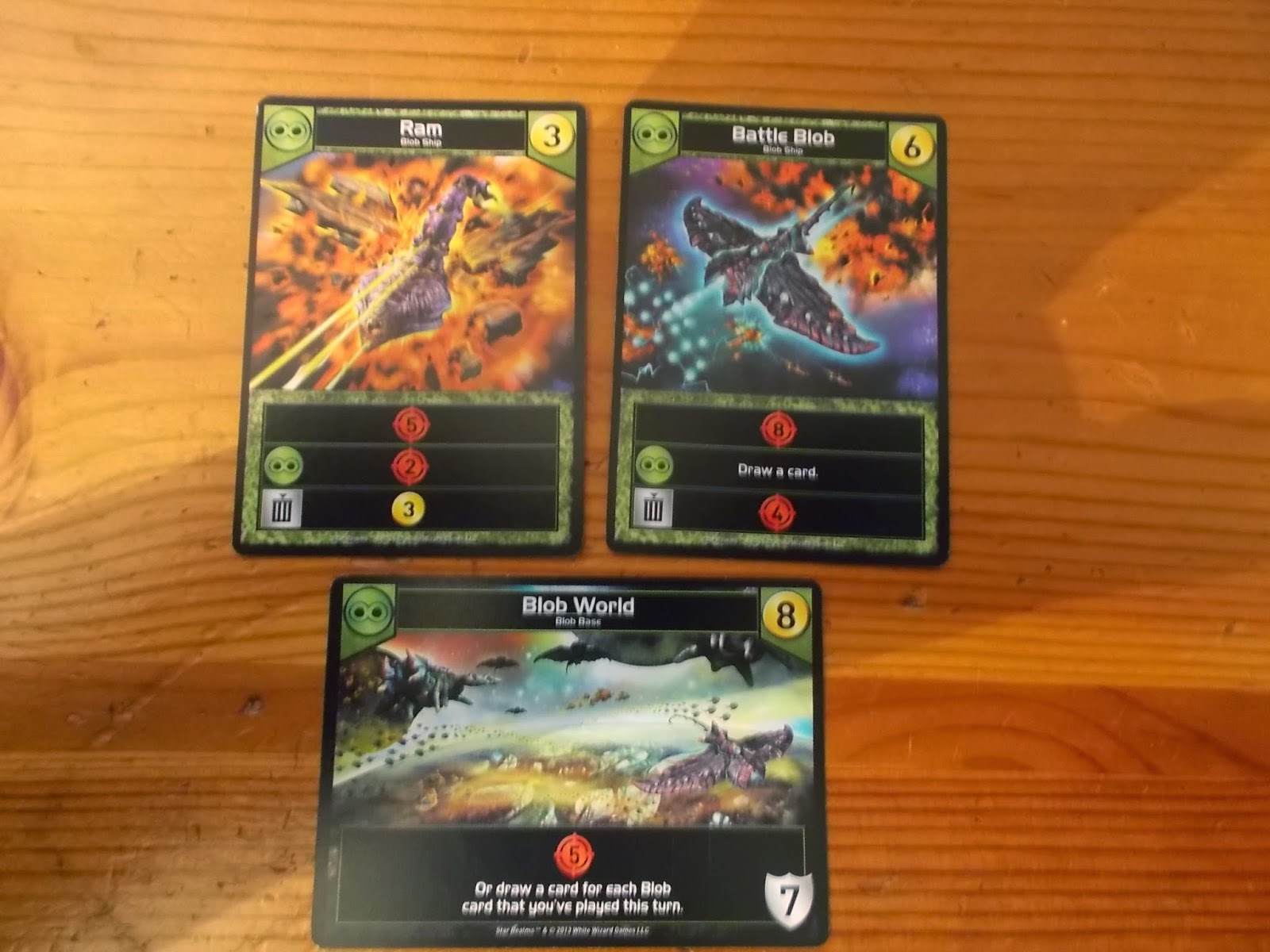 The Blob faction (Green) are an organic battle fleet that works by delivering lots of damage and drawing additional cards with which to press the advantage. 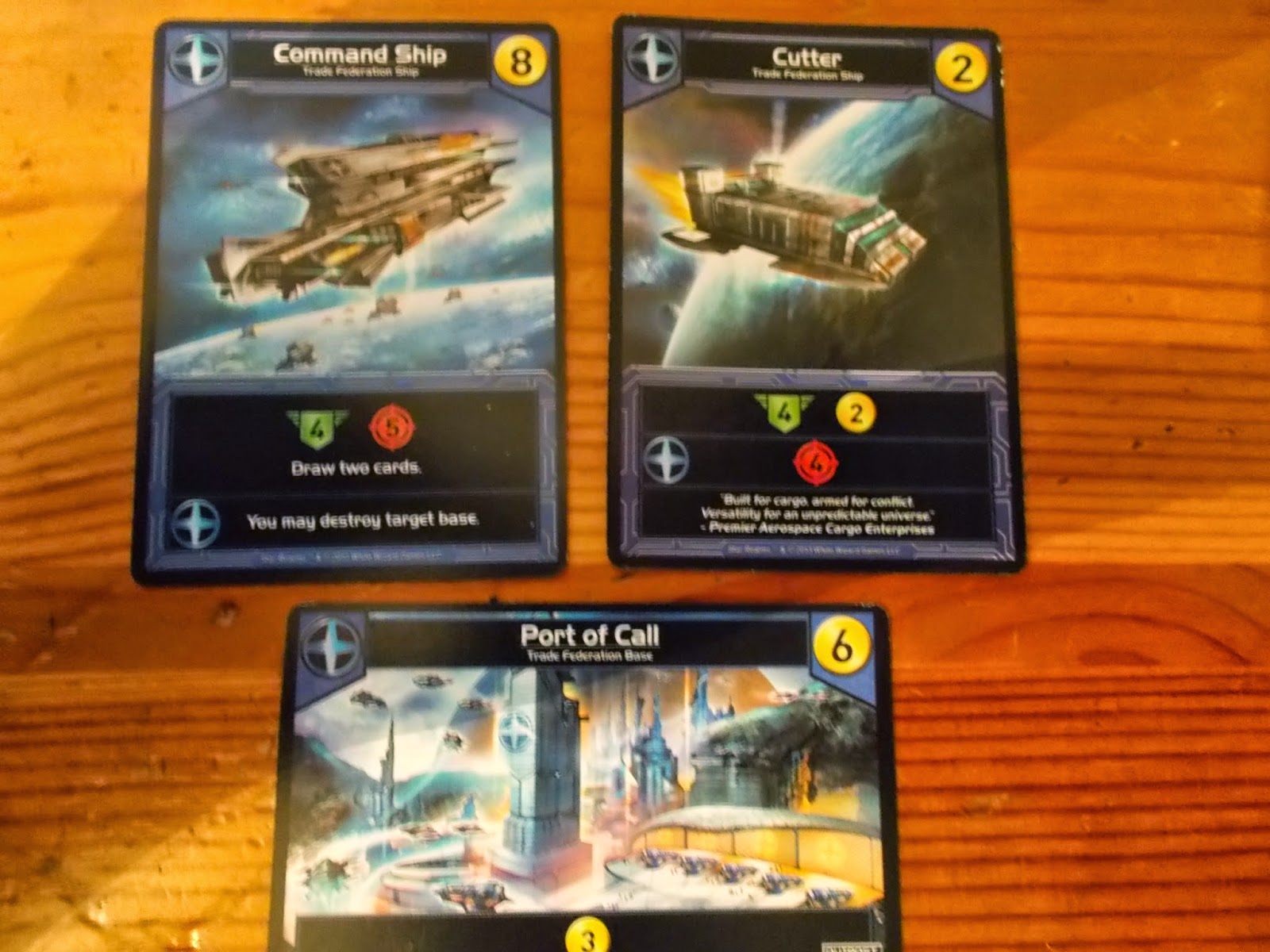 The Trade Federation (Blue) are the main defensive fleet, their ships offer lots of trade but also raise your authority level so that you can keep going even though you’re taking hits from other fleets. 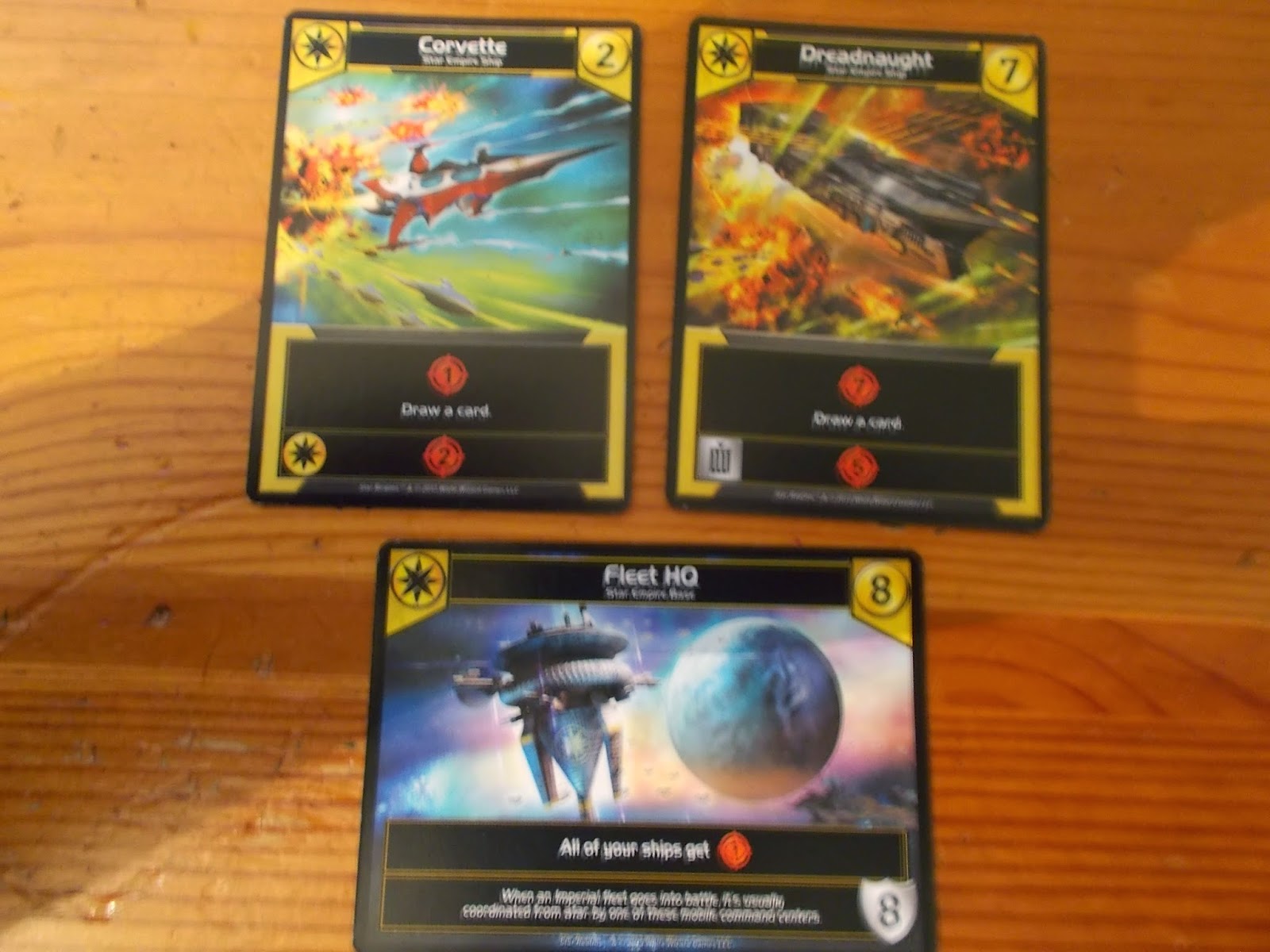 The Star Empire (Yellow) are a direct attack fleet that don’t deal the same levels of damage as the Blob fleet, but have additional damage in the form of causing the opponent to discard cards from their hand so that their next turn will be reduced in what they can do. 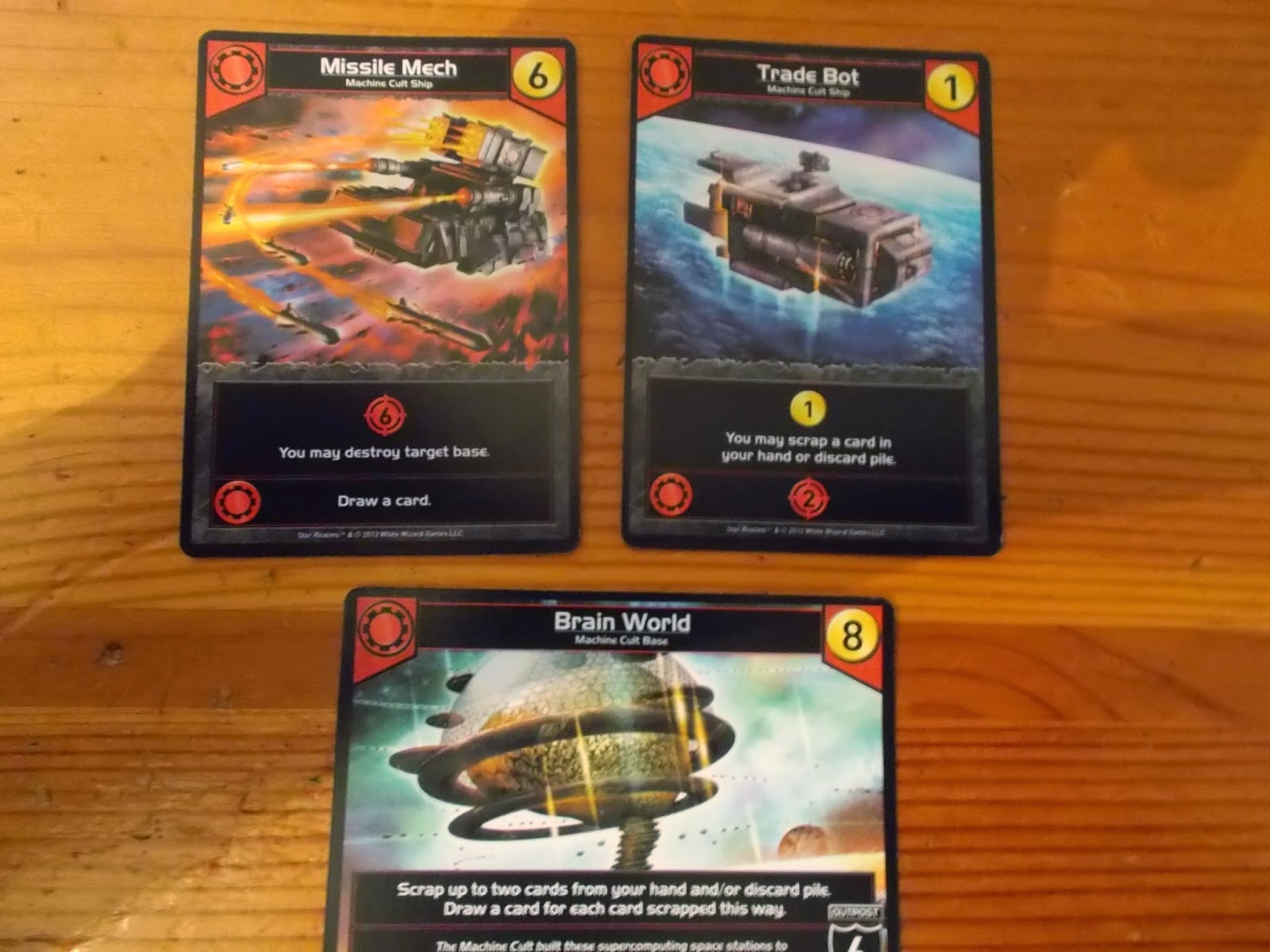 The Machine Cult (Red) are all about efficiency, most of their cards have the ability to remove cards from your deck or discard pile to streamline its efficiency, the larger of their ships allow you to remove things from the trade pile in the middle of the table.

It’s very difficult to build a deck that’s completely one of the factions, the trade deck being properly shuffled tends to have ships of all different types coming up, so working out which combinations work for you is an important thing early on, diversifying will only give you a deck that doesn’t work too well, but most decks with two factions in them can be very efficient.

Playwise, there’s no one faction that’s stand-out overpowered, and there’s a lot of work been put into the balance of it.  There’s expansions for the game that I haven’t picked up yet, but I’m sure I will be, and while I know that a self contained game doesn’t need expansions, I can’t help but think that this game could easily support more factions (even if the trade deck replaced one faction for another completely), and that the game would only benefit from greater diversification.

Available directly from White Wizard Games at http://www.starrealms.com/ they also have an app for playing the game when there’s no one else about.
Posted by John Dodd at 15:43