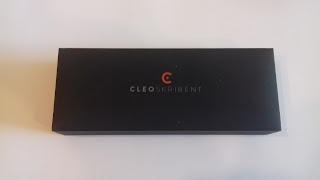 Does it stack up against the cheaper pens I use?
Does it offer anything that those pens don't?
I'm from Yorkshire, is it worth the money they're asking for it...?

It's the last one that's usually a sticking point...

This is the Cleo Skribent Classic. 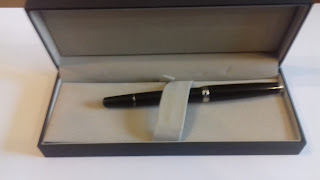 In advance, as always, I didn't pay for the pen, I'm just reviewing it, no incentives have been received in return for my opinion.  The Classic retails in the £70-£110 range depending on where you shop and the nib combination that you choose to go with it.  Now, to put that in perspective, my every day carry contains a Pilot MR with a custom Nib, a TWSBI 580, and a Kaweco sport, the cost of all three of which would be about the same. 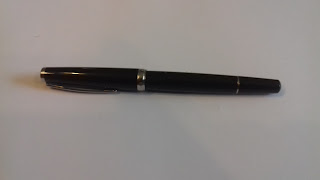 It's a screw cap, resin for the threads, but there's no sticking to it, unlike other pens with a similar screwset that I've tried.  It's not heavy, but it's well constructed, the parts fit together seamlessly, and the finish is superb. 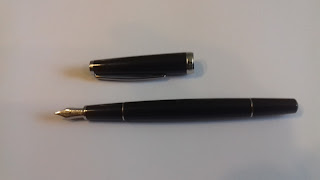 I chose to review the fine steel nib, which is a very rigid nib, almost no give in it at all, which is something that I tend towards when picking out things to write with. 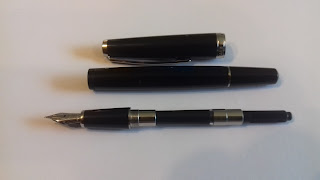 The version I tested came with a convertor, but they have both piston filling options and regular cartridge options to work to the individual taste.  In writing with it, it's comfortable, it's comparable in weight and feel to the Pilot MR, but the feel of it is closer to the TWSBI.  The nib is absolutely rigid, which allows for very easy writing, even when you're working as small as I do.  In the interests of seeing how well it works for others, my lovely wife was kind enough to do a little writing as well. 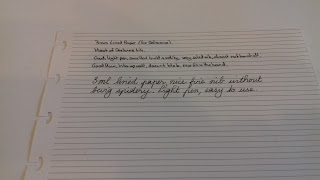 It's a comfortable pen that works well, the flow on it is excellent, it starts up without having to prime it, and the flow is fast enough for larger writing whilst not blobbing when working slower.  It's not ergonomically designed, but it feels agile in the hand, one of those pens that you find yourself turning over in your hand while you're waiting for the next works to materialise.

It easily stacks up against the cheaper pens I use.
It is more robustly constructed than the cheaper pens, and the nib is a work of art.
Is it worth the money they're asking...?

Now here's the thing, it is a lovely pen, but it's not cheap, and while I've enjoyed writing with it immensely, the price point is a little high for my tastes.  At the lower end, I'd certainly consider it (I just might not take it anywhere...), at the higher end, it might be too much expenditure.

But it'd be a very long thought before I could decide against it...