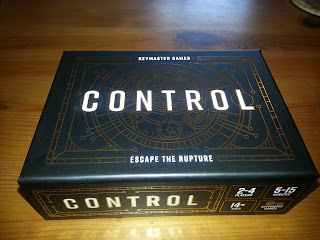 I like games that don't need you to read an operations manual to play, simple rules with artwork that fits the concept and fast gameplay.  But I'm also a sucker for something where I can get behind the premise of it, all games are a combination of working out the odds and going with your gut feeling, so it's particularly good when you get something that goes with all of the above.

So a game that's all about time travellers trying to build a time machine whilst sabotaging the other travellers efforts got my attention for certain...

The premise of the game is very simple, each turn every player gets one action, they can draw a card, play (install) a card, burn one of their cells on the table to use the effect of it, or defuse an opponents card by playing a card of equal or higher value over it.

The winner of the round is the first one to make 21 exactly with the cards they have installed.  This makes for a very short game in some cases if people have exactly the right cards in their hand, it also means that as soon as any players points reach 11, the other players have got to consider that the next card played may be the one that ends the game.

There are two different types of card, Silver and Bronze, silver have an immediate effect when they hit the table or have an effect when something affects them, Bronze can be burned to trigger a different effect.

There are two different types of card, Silver and Bronze, silver have an immediate effect when they hit the table or have an effect when something affects them, Bronze can be burned to trigger a different effect. 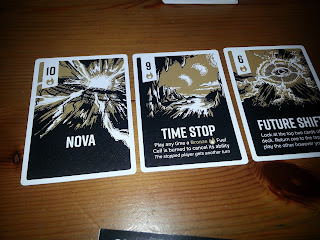 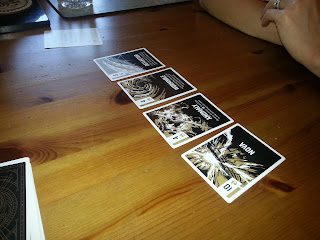 As soon as a player scores 21, the round is over, no chance to retaliate or change things, the traveller has travelled.  When a round is won, the player gets a time token.

Two minute learn for a ten minute game (and that's with four players), the combinations are really interesting, the game gets involved quickly and if everyone is concentrating on what everyone is doing, the interplay can get very complicated, which is excellent when it's such a simple premise.  At a glance, everyone can see how everyone else is doing, but keeping up with the different abilities on the table makes every game different. 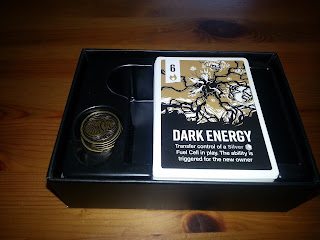 The production values are excellent, custom box with real metal counters, the cards have been done to bicycle standard and the box is thick card.  Don't know what the retail value is, but if it's anything like what I got it for on kickstarter, this is going to be one to watch going forwards.
Posted by John Dodd at 14:28