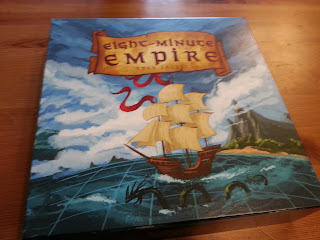 So it was my birthday two weeks back and as we waited to do the birthday party till this weekend just gone, I found myself with a ton more games all of a sudden.  I should point out that in general, I don’t like Risk, the mechanics of it are too simple and it relies directly on the concept of attacking continually and not waiting to be attacked, which very often makes the game less interesting than it should be.

I liked the idea of a game of risk that could be played in no time at all and took into account the possibilities of goods and city building.  This is why the first game on my birthday list was Eight Minute Empire. 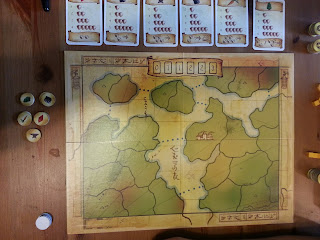 It’s a simple game with a lot going for it, playable between two and five players and with two boards to work on.

The game is played by placing armies and moving them around the board, but to do this, you need to choose a card to make your moves from, these are on the top of the board, with an appropriate number of points for each one.  Meaning that you can always take the far left card as it costs nothing, but if you want to get a jump on the other players for the good cards, you need to be willing to spend gold on them, and as there’s no way to get gold back, you need to be careful with it. 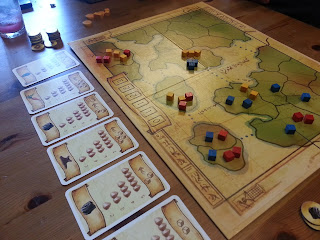 Each card allows you one of the following actions. 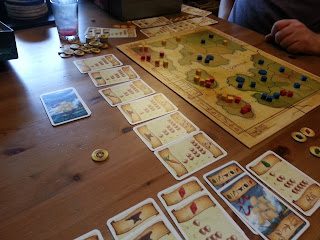 There aren’t many build cities or destroy armies cards in the decks, most of the game is based around placing and moving, and because the end game is based around points scoring, that’s a good thing.  You get points for controlling areas, continents (by holding most areas on any given continent), goods you've collected (which are worth different points levels as shown here) and cities that you’ve built. 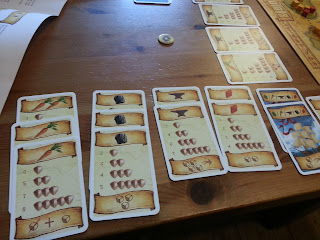 The game lasts until each player has drawn a number of cards (the more players, the less cards), and it doesn’t slow down as the game becomes more advanced.

Overall it’s a simple game with a good premise and will play differently every time you play it, very enjoyable.
Posted by John Dodd at 14:19