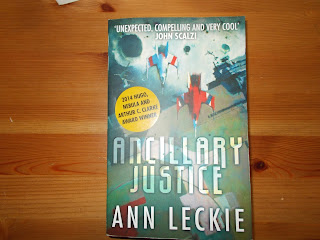 To win any one of the major awards in writing in a year is a major achievement, to win five of them is a feat worthy of legend, and it sets up an anticipation for the story that puts an unfair strain on the words before you even start to read them.

Cheerfully I’ve never put much faith in awards in general, so I just read the book…

Ancillary Justice is the story of Breq, who was once the Justice of Toren, a massive warship in the service of the Empress that commanded thousands of troops and brought the will of the empire to all the corners of the galaxy, now a human like so many others.  The story begins when Breq discovers the body of Seivarden, a person who should have been dead some years ago from Breq’s previous life as Justice, and makes the decision to look after them against all better logical instincts.

Progressing from two perspectives, that of the present day Breq making their way in the world and that of Justice of Toren in the past and the events that led up to Justice becoming Breq and Breq alone, and there’s nothing in the narrative that marks the difference to the two perspectives because as far as the narrator is concerned, Breq and Justice are the same creature.

This caused a particular problem for me, because while the nature of a self is a constant, time is not, and even a slight hint at the beginning of each chapter (in the manner of Game of Thrones with the name of the character whose chapter it is) would have been enough to prevent the disconnect. As it is, when you start a new chapter, you have to read till you find a landmark or character that’s unique to that section before you know which time period you’re in, sometimes immediate, oft times not.

Not a problem for many perhaps, but I really didn’t like that about it. The other interesting point is the way in which none of the characters are categorised as male or female, particularly when you consider that the languages used on the planet have both male and female inflections and traits, and that too makes for a read that is more challenging than I thought it would have been.  I understand the idea that Justice would only ever have considered itself a ship, and so too would Breq as a result, but to have uncertainty over the gender of those that Breq meets in times future seems a little at odds.  There’s various talk over the net of it being done to make you question how you see gender and sexuality, particularly as the names given don’t conform to normal naming conventions (western anyway), so there are moments where you do question when a character you thought was male is revealed as female.

An interesting exercise to be sure, but not something to be done in the middle of an active story perhaps...

The story doesn’t race along, but the suspense builds well, there’s a sense of foreboding about what was done in times past and what needs to be done in times future.  Ancillary Justice stands and falls with the main character, Justice as a ship is cold, mechanical, analytical, capable of looking through hundreds of eyes at once, seeing things from all angles without passion or confusion.  Breq sees only through one pair of eyes, eyes that have the hormonal taint of flesh to them, and it’s in the those hormones that the drama plays out, where Justice would only ever (and does) follow orders, Breq is faced with the psychological rebellion that something just feels wrong and is compelled to act upon it.

I haven’t said much about the book and the plot and to be honest, that’s because it’s not the most complex of plots till the last third, at which point all the intrigue starts pouring in, the truth about Justice is revealed and the book gets to go forwards from a single unified perspective.  I understand why the two stories are interspersed, but they’d have been better doing them in chronological order, with the Justice section first and the Breq section afterwards, it wouldn’t have taken anything away from the story and it would have given the reader something to hold on to with Breq, rather than trying to veil everything till the big reveal from times past.

I did enjoy this book in the end, but there was a point at which I put it down to get on with other things, something that doesn’t normally happen with me at all. I normally devour books in a single sitting, but the combination of slow pacing and figuring out which time zone the chapter was in got to me and I needed a break from it.

By the time I’d finished the book, I was certainly into the story and interested in what would happen next, but it took me running out of other new reading material before I did go back to it.
Posted by John Dodd at 13:31