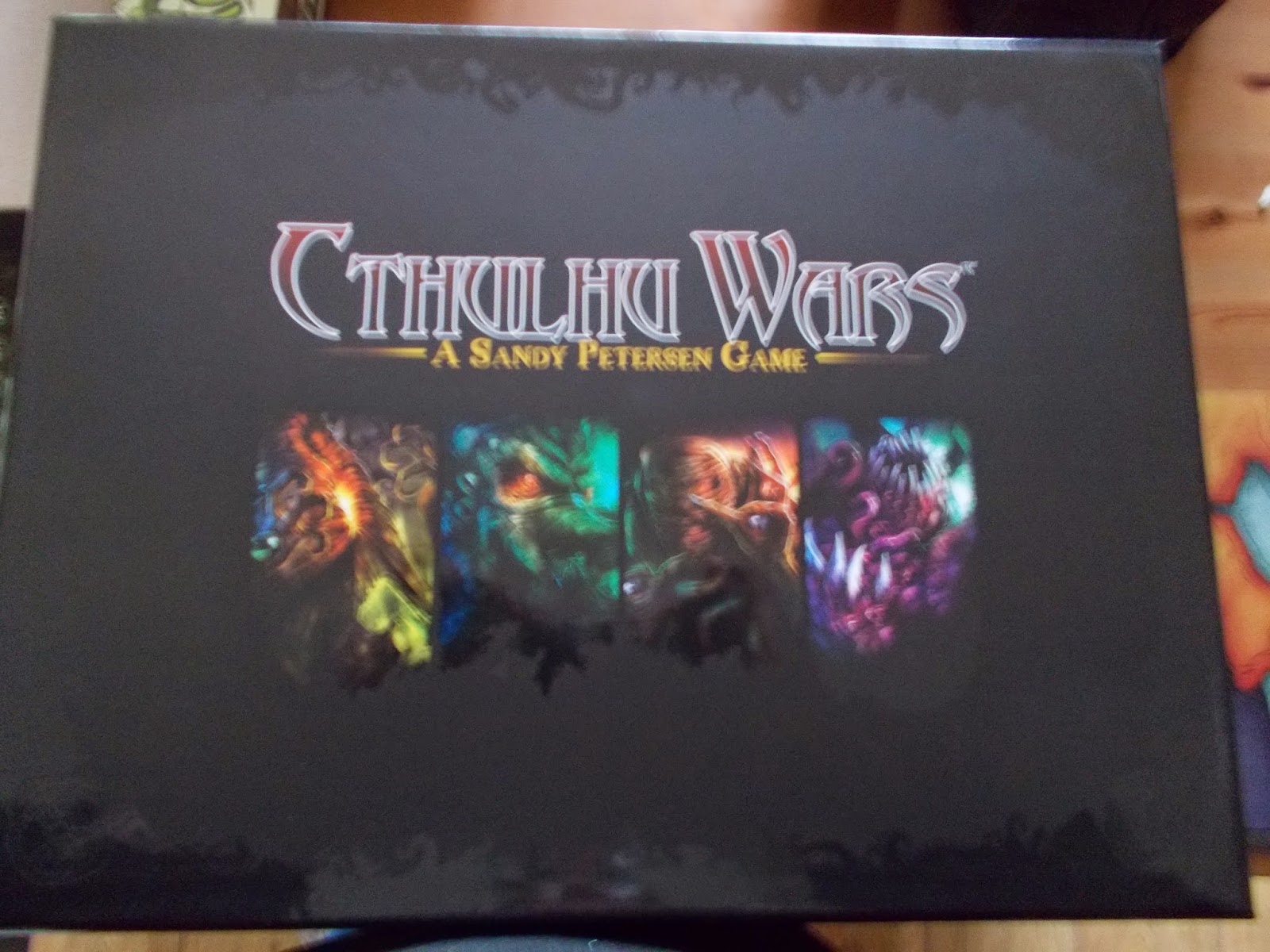 So, of things I was expecting to get this morning, Cthulhu Wars, was not amongst them...

However, cheerfully it arrived and so instead of doing things about writing at writers group this evening, we sat down to figure out how to end the world... 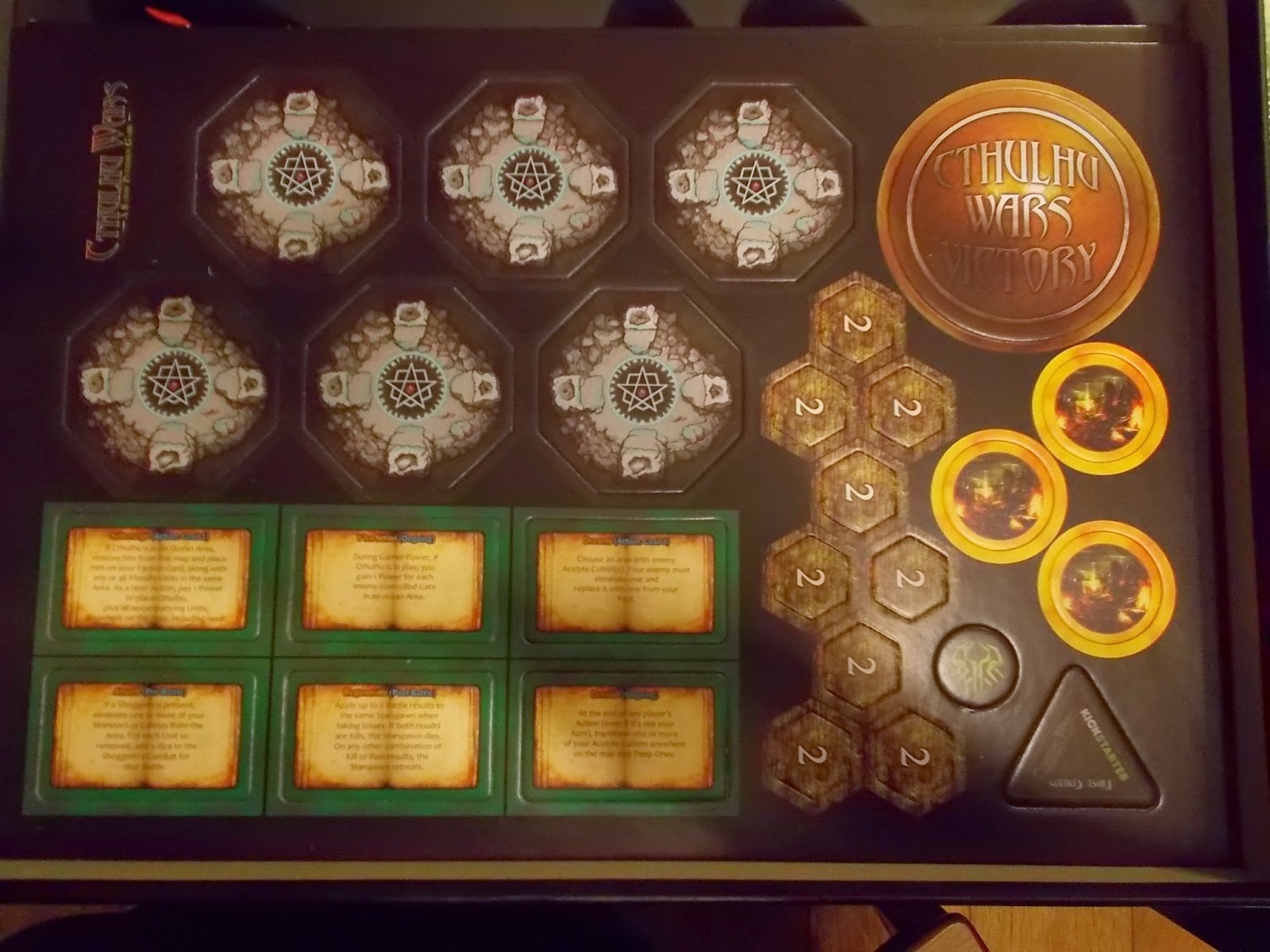 The first step in any look at this game has to be the box, board, and counters, all of which are spectacular in their appearance, the box is heavy duty card, well inlaid with all the backers names (haven’t found mine yet, but the search goes on), and full colour artwork on everything. 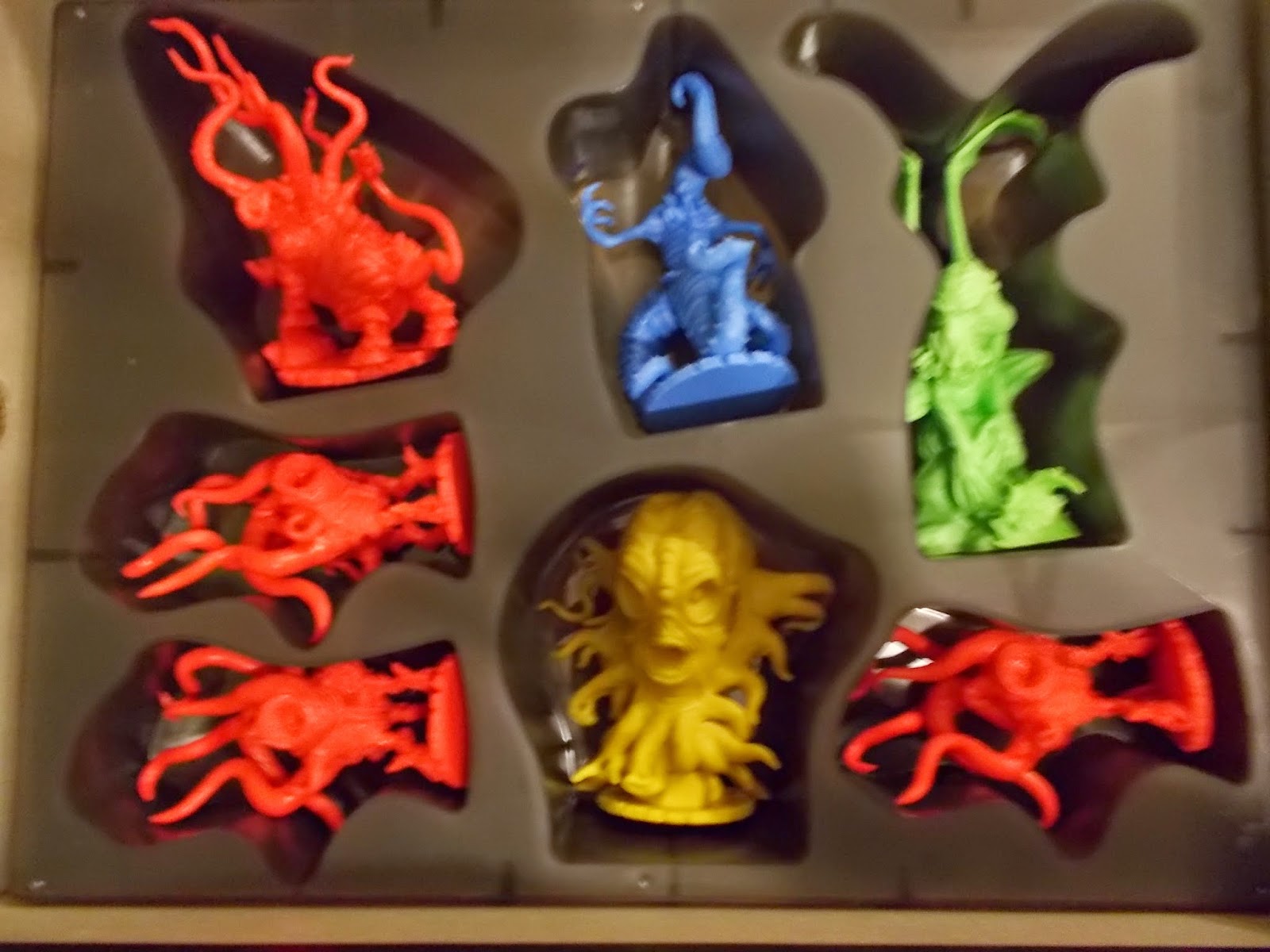 The main pieces are packaged in a heavy plastic protective sheet that’s nearly the depth of the box itself and will keep the main pieces protected from harm easily.  The smaller pieces don’t have a separate tray to put them in and while they got everything in the box to get it to me, how you manage to get everything back in the box is as yet a mystery to me.

Simple premise, each player takes the role of the cult of one of the great old ones, and the idea of the game is to go around the board creating gates, summoning monsters, and fighting each other for the earth.  There are four factions in the basic set, being Shub Niggurath, Hastur, Nyarlatothep, and Cthulhu, each of which has a playing style very particular to them, advantages and disadvantages particular to them, and spells and special abilities unique to them.  There aren’t any shared abilities in the game, everything is keyed to a particular group, and it makes playing the different factions a challenge every time.


As an example, the Cthulhu faction (Green) hits hard, and unlike every other faction, respawning Cthulhu when it finally goes down takes comparatively little power, so it’s in your interest to get out there and start smashing things, particularly as your spells and abilities are linked to doing that sort of damage.  Nyarlatothep, however, relies on speed and relocation of it’s forces to get the win, holding sway over how forces retreat and being able to move it’s own forces in to help in the fight.

Initial setup starts all players equal, with a gate and single cultists, and the game moves into the power generation stage, where players get power for all the cultists and controlled gates they have, together with any captured cultists that they had from last turn.  Cultists can be captured by monsters or great old ones, and are returned every turn to the person who had them in return for the capturer gaining more power.  As it turns out, that part of the game proved pivotal in the first game we played, as Nyarlatothep went out and took two cultists from Shub Niggurath, reducing Shub Nigguraths power by 2 and increasing it’s own by 2 the following turn.  This provided a small shift, but enough to move the balance of power and limit Shub Niggurath’s power the following turn. 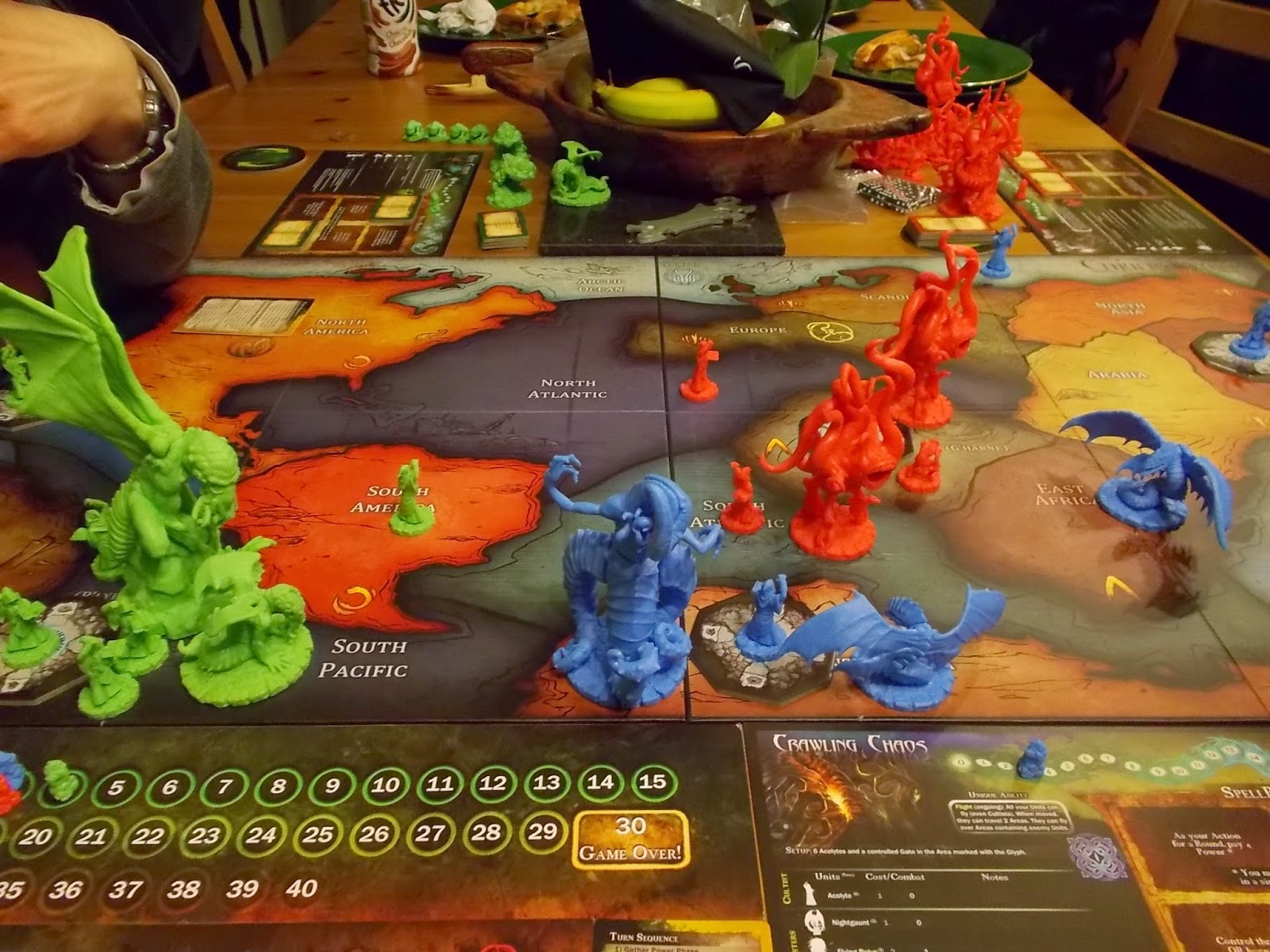 Once power has been generated, there’s a Doom Phase, where all the players score doom points for all the gates and great old ones they control.  In this phase, they can also enact rituals of annihilation which further increase their points and make it more difficult for other players to do the same.

Once the doom phase is over, the players move to the main phase, in which moving, attacking, summoning, and spell casting is done.  The players each take a single action and pay for it using their power reserves, going around the table in turn till everyone has no power left, then the game begins again.

Simple premise, and the game ends either when someone passes 30 doom points or when someone does the final ritual of annihilation, at which point the person who has all their spellbooks and the most doom points wins.  It’s possible for someone to get to 30 doom points without all six spellbooks in place, in which case the person with the highest doom point total and all their spellbooks wins.
Combat is a simple affair, you total the combat values of all sides involved in the fight and roll that many D6, a six is a kill, a four or five is a pain, and one to three doesn’t count.  For each kill you score in a fight, the opponent removes one of their models in the fight (no matter the size, cultists and great old ones both take one kill to remove), for each pain token you get after the kills have been resolved, you have to retreat one of your units to an adjacent tile. In larger fights, this can change the look of the board dramatically as a multi monster mash can leave the tile completely empty and the board saturated with fleeing monsters.  It’s a nice, easy going system that works well.

Start to finish (and that includes going through the rules and drooling over the miniatures) took us three hours, didn’t seem like that long and we were playing faster by the second towards the end.  I suspect a second game will take significantly less time, but I’d want to see how the other factions were played, liked Nyarlatothep, but I’d be interested in the others as well.

Overall, good game, it’s late, and it’s long overdue, but cheerfully it’s been worth the wait.  The RRP on it is now $199, which is a lot of money for a game, and I honestly don’t know that I’d pay for it at that price, because that’s just the basic set, which is gorgeous, but I’m not sure any game’s worth that amount of money.

Price notwithstanding, the game board and pieces are superb, it’s clearly gone through a lot of rules testing, and even though it’s a year late from when it was going to be delivered, and there have been some frustrations from many along the way, it’s here now, and it’s been well worth the wait.
Posted by John Dodd at 16:25