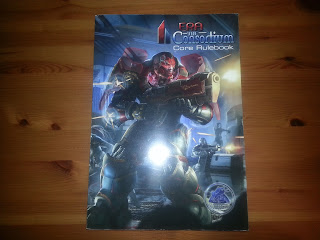 There's still going to be a round up of the games that have been submitted to the Expo awards later in the year when we get closer to the time, but given that this particular one has a kickstarter running for it, we're doing an advance review of the game to give it a bit of a signal boost.

Era: The Consortium is a space opera of Wagnerian proportions from Shades of Vengeance.  The main book is 300 pages, with more than half of that given over to background and campaigns to get the players into the setting.  The artwork is of excellent quality and the layout and design is the equal of many of the publishing houses with far larger budgets.

There's more than 500 years of background material listed in the main book, and that material allows you to make a choice not only of the things you are now, but of where you came from and what part your ancestors played in the ongoing universe.  So by the time you get a hundred pages in to start character creation, you should know exactly where you're going.

And that brings us to character creation... 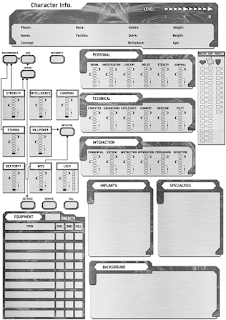 Character sheet is well laid out, some things referred to in the generation aren't present on the sheet, but they're only referred to once, so it's only a minor confusion, nothing serious. The statistics are raised by spending points as indicated on the character sheets, everything that's derived from something else is listed on the sheet including where it's derived from, it's not a flowchart, but it has the feel of one..  Specialities are given to skills with three or more points and give the character a bonus to certain actions when performed, then it's off to choose weapons, implants, and equipment. 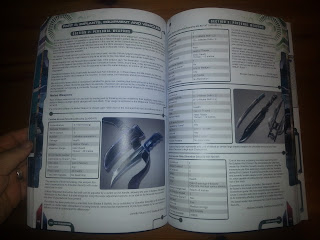 The tech level in the game is colossal, the things depicted in here are fantastical to the point of impossibility, and unashamedly so.  Biotech, Nanotech and all things in between, and to give you some idea of the tech levels in question, one of the implants is called Schrodingers Implant, a liquid metal implant stored in a state of quantum flux that can be commanded to become any other implant in the game, it has to remain as that implant, but it gives you a hell of an out if you need one.

The weapons and equipment are beautifully drawn, there were a few things that clearly had inspiration from other sources...

But they fit well in the grander scheme of the universe, the information within is clear and well presented through out, very easy to use and there's a good range of things from across the whole 500 years, so if you're playing in an earlier part of the history, you're not neglected. 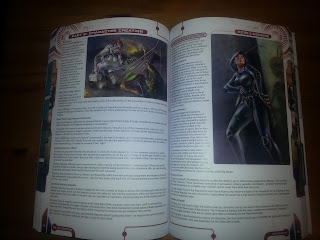 The rules system is very reminiscent of old world of darkness, D10 base against target number, tens explode, ones are fumbles.  However, knowing that there's always potential for misunderstandings in the rules, they've also included flowcharts and diagrams for the running of combat, skill use, and pretty much everything else you'll ever need.  Is it required?  No, not in our opinion, the system is very simple to use and supports itself well, however, for those who do have issues with rules, the additional simplification is a nice touch that many RPG's leave out these days.

There's enough in the one book to keep you going for a very long time, there's a full campaign in the back of the book and all the information to back it up. It's not detailed to the point that you can't branch out in your own directions if you wanted to, and it's easy to see where a campaign could go after the initial adventures run out.  There are a number of other books being launched for this and given the work that's gone into this, I can see them going far.

Era: The Consortium retails for £30, the copy we reviewed was entered into the Expo awards and was given freely, it's available at http://www.shadesofvengeance.com/store/#EraTheConsortium

Their new Kickstarter can be found at https://www.kickstarter.com/projects/shadesofvengeance/era-the-consortium-the-secret-war
Posted by John Dodd at 02:13